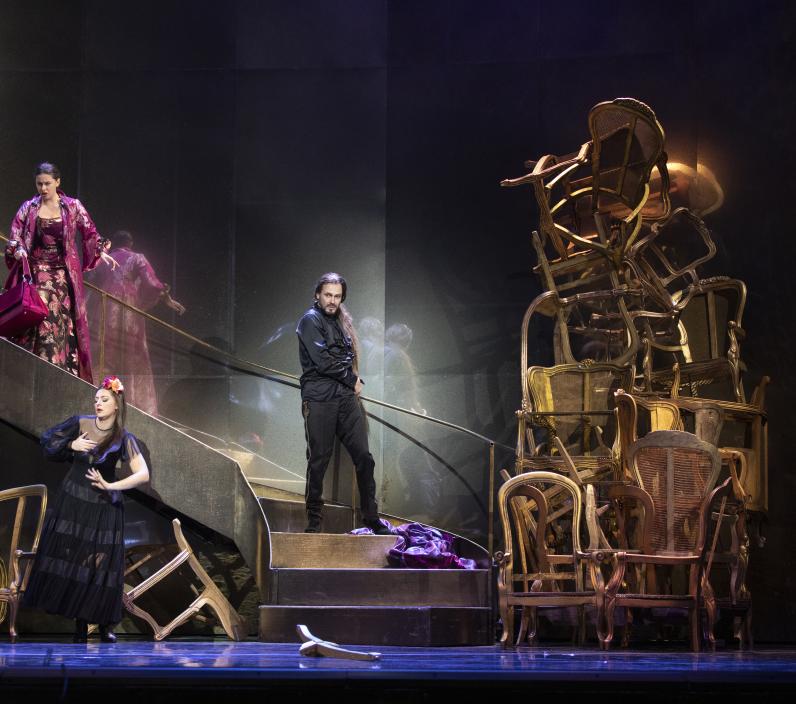 The insatiable Don Giovanni is not picky: anyone will do, from Donna Elvira to her maid and the bride at a country wedding. But when one of his conquests ends in murder, he sets off a chain of events that takes him forever closer to his bitter fate.

When the most skillful librettist and the most ingenious composer of their time join forces, the result brims with an irresistible blend of tragedy and comedy. Carnivalistic joy and lust overflow in Finnish actor-director Jussi Nikkilä’s new interpretation of Don Giovanni, marrying modern and rococo styles.

Act I. Elvira (Tamuna Gochashvili) joins forces with Ottavio (Tuomas Katajala) and Anna (Hanna Rantala); they are going to the ball and intend to exact vengeance on Giovanni. Conducted by Patrick Fournillier and directed by Jussi Nikkilä.

Don Giovanni, a nobleman and libertine, attempts to seduce Donna Anna by pretending to be her fiancé. Anna’s father, the Commendatore, arrives and challenges him to a duel. Don Giovanni kills the old man, upon which he escapes with his servant Leporello. Donna Anna makes her fiancé Don Ottavio swear to avenge her father’s death.

Soon after, they meet Donna Elvira, one of Giovanni’s former conquests. Leporello, however, curtly tells Elvira that she is not Don Giovanni’s first victim and will not be his last, presenting her Giovanni’s long catalogue of conquests. At a country wedding, Don Giovanni seduces the bride, Zerlina. When Donna Anna and Don Ottavio arrive, she recognizes the voice of her father’s masked murderer. Using Leporello as a shield, Don Giovanni escapes once again.

Leporello threatens to leave his master, but Don Giovanni bribes him with money and persuades him to help him seduce Donna Elvira’s maid. Exchanging clothes with Leporello, Don Giovanni serenades the maid while Leporello, dressed as Giovanni, diverts Donna Elvira. Zerlina’s fiancé, Masetto, arrives leading a vengeful mob in search of Don Giovanni. After Don Giovanni dupes Masetto and makes his escape, Zerlina comforts her fiancée. Leporello, mistaken as Don Giovanni, must reveal his true identity to escape death.

At a cemetery, Don Giovanni relates his adventures to Leporello. Suddenly, a ghostly voice says that his mirth will soon end. It belongs to the Commendatore’s funeral statue, which Don Giovanni boldly invites to dinner. The statue accepts the invitation. As the dinner begins, Donna Elvira comes to ask him to change his life. At the same time, the stone guest makes his appearance. The statue calls for Don Giovanni to make amends for his past. When the Don claims to have no regrets, flames engulf him.

As the legend goes, Don Giovanni was a libertine and a scoundrel. His list of sexual exploits is famously so long that a word was coined after his servant unfolding a seemingly endless concertina list enumerating them: the leporello. If the Don Juan legend appears ageless, the first written version can be traced back to Spanish playwright Tirso de Molina: El burlador de Sevilla y convidado de piedra (The Trickster of Seville and the Stone Guest), first published in 1630. Many other adaptations have seen the light of day before Lorenzo Da Ponte wrote the libretto for Mozart’s opera in 1787, most notably Molière's play Dom Juan ou le Festin de pierre (1665) and Goldoni's play Don Giovanni Tenorio (1735).

Da Ponte specifically drew from Giovanni Bertati’s libretto for Don Giovanni Tenorio, a contemporary opera by Giuseppe Gazzaniga, although he enhanced the drama by adding complex layers to all characters. Nonetheless, by the time Mozart’s opera premiered only two years before the French Revolution, the legend of the godless rake had been somewhat undermined. Whereas in Molière’s time, merely a century before, it was suited for drama, by the late 18th century the comic relief had taken the upper hand.

So is Don Giovanni comedy or tragedy? This unsettling ambiguity lies at the heart of the opera. Mozart himself considered it to be a dramma giocoso – literally a drama with jokes, an operatic genre prevalent in Italy in the mid-18th century. Jussi Nikkilä, director of this production at Finnish National Opera and Ballet, reflects on this juxtaposition: ‘Comedy and tragedy cross paths and collide in the opera in many ways. I find it very enjoyable when the audience doesn’t necessarily know whether something is funny or insanely sad.’ One example of this can be found in Leporello’s infamous catalogue aria, in which he satirically recounts his master’s conquests, much to Donna Elvira’s chagrin, who only then learns the extent of Don Giovanni’s infidelity.

Despite his vices – or because of them – Giovanni’s character has never failed to enthral audiences. Although everyone blames and vilifies him, Leporello calls him master and Elvira husband. The Don’s identity is hard to grasp: ‘Who I am, you will not know’ he sings. This inconstancy can be found in the music Mozart composed. He wrote the role for the singer Luigi Bassi whose range was described as ‘midway between tenor and bass’ (Allgemeine Musikalische Zeitung, 1800). Today, such a voice would be classed as a baritone. Throughout the ages, however, the role has been sung by tenor and basses alike. Even Giovanni’s vocal range is slippery. While vocal demands command casting choices for every other character, Giovanni can be sung by all sort of voices. Similarly, he comes in many disguises. He masks himself, pretending to be Anna’s fiancé. Borrowing Leporello’s attire, he gains entry to Elvira’s maid.

Given this elusiveness, how can Don Giovanni be staged today? Is this an opera about a criminal’s comeuppance? Da Ponte’s most decisive departure from Bertati’s libretto consisted in not sending Donna Anna off to a convent, instead empowering her to mobilise Don Ottavio and the others in her quest for justice and punishment. The subject fits right into the contemporary social debate surrounding rape culture. Jussi Nikkilä explains ‘The story is about a sex addict. I wanted to take a bold approach to the theme. Don Giovanni is an adult male who has operated in a certain way for decades. His entire character, his behavioural pattern and what he does to people provide an ideal landscape and dramatic tension for a director. No one can act like this in a vacuum – others must grant the dictator his power.’

The moral, then, is that Don Giovanni rapes and murders because he can. The system is skewed in his favour: his power stems from his social standing. If earthly justice is impossible, he can only get what he deserves by descending to hell. For Nikkilä such a reading might seem to onesided. He is interested in Giovanni’s motives. Why does he act like this? What is he hiding? Is there any beauty left in him? ‘In order to truly love, you must embrace the possibility of getting hurt. The very fact that Don Giovanni can’t do that destroys him.’