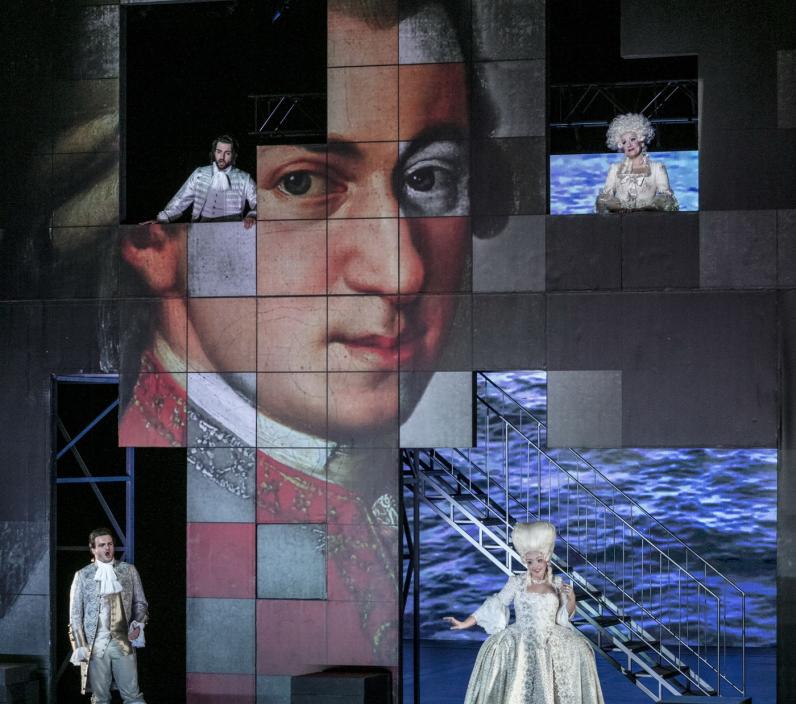 A miserly marquis and a wealthy old count contrive to marry girls in each other’s protection. Everything seems to be going to plan, until a giant goose starts raining money from the sky.

After the success of Die Entführung aus dem Serail, Mozart began composing L'oca del Cairo and Lo sposo deluso but gave up on both of them. The two fragmentary comedies were never staged in his lifetime but are brought together in this new pasticcio at Hungarian State Opera conceived by its General Director, Szilveszter Ókovács.

What is Mozart's shortest aria? The Champagne Aria from Don Giovanni is a good guess, but that's not the answer. It's actually this little gem from his unfinished opera L'oca del Cairo.

Act I. The stable-boy Chichibio (Máté Fülep) is in a fit of jealousy after having just witnessed Calandrino woo a door key from Auretta's hands. He complains that women say they're models of fidelity but that the pretty ones never stay faithful for long.

Behind the scenes at the Eiffel Art Studios

Take a look behind the scenes at the Eiffel Art Studios in Budapest as the cast and creative team at Hungarian State Opera prepare for the opening night of Mozart's L'oca del Cairo, ossia Lo Sposo Deluso.

In the castle of Ripaseccha, the no-longer-youthful and miserly marquis Don Pippo is preparing for his wedding, to the great amusement of his secretary, Calandrino. Don Pippo’s ward, Celidora, demands that her guardian keep his promise by finally giving her away in marriage to the young man she loves, Biondello, who has been hanging around the house of the marquis for a year now. Don Pippo tells her that they will be celebrating a double wedding that evening. It won’t be Biondello that Celidora is marrying, however, because Don Pippo is giving her to a wealthy Roman count of similar age whose own ward he himself, it so happens, is preparing to marry.

Biondello looks woefully at the marquis, who laughs at the boy and dismisses him: the impoverished lad can have Celidora when the singing of the goose of Cairo makes dollars rain down from the sky. Calandrino racks his brains to figure out how he can help Biondello get his beloved back, but Don Pippo locks the girl in the castle’s tower in order to prevent any trickery.

The marquis happily welcomes the Roman guests as they arrive in the house: they are his veiled bride and his future father-in-law/son-in-law, the noble-spirited and sophisticated Lionetto. As Don Pippo accompanies the count to the castle tower to introduce him to his future wife, Celidora, Calandrino is forced to entertain Don Pippo’s bride. The woman removes her veil, and the secretary is astonished to behold Lavina, his beloved. He immediately resolves to spirit her away. When Don Pippo returns to find the two lovers in each other’s arms, he has Lavina locked in the tower together with Celidora and entrusts the key to Auretta, the chambermaid.

Calandrino woos the tower key out of Auretta’s hands. The scene is witnessed by her lover, the stable-boy Chichibio, who becomes instantly jealous.

The ‘big meeting’ between Count Lionetto and Celidora takes place: it turns out that Don Pippo has sent the love letters that Celidora wrote to Biondello to Lionetto, who for some reason addresses the girl as ‘Clarice’. Celidora bitterly announces that the old man will only be her husband when the singing of the goose of Cairo makes dollars rain down from the sky.

After his afternoon nap, Don Pippo feverishly instructs Auretta and Chichibio to prepare everything for the double wedding. The chambermaid and the stable-boy, however, decide that the lovers should be together and resolve to help the youngsters avoid the forced marriages.

In great secrecy, Calandrino brings the girls down from the tower. Celidora and Biondello fall into each other’s arms, and the lad produces money to help his lover out of her predicament. Lionetto surprises them and, left alone with Celidora, objects that she is not the same person as Clarice, whom her ‘father’ said so many good things about, as she was neither learned nor even virtuous. Celidora bitterly explains to Lionetto that she has always been in love with someone else and that her guardian has a heart of stone. Finally, she tosses the money in front of the older man and hurries off. After some moments of thought, Lionetto addresses Chichibio, who is right then sneaking around the area in a goose costume, and tells him to inform his master that the two lovers are getting ready to abscond right now. He himself decides to put an end to the drama; he gathers up the money from the floor, along with the goose costume that the stable-boy has left there, and hurries off.

The four lovers are prevented from fleeing by the river in front of the castle, so they summon workers to quickly build a bridge over the water. The work is feverishly being carried out when Auretta and Chichibio bring news: Don Pippo is approaching!

The marquis indeed arrives, and in a terrible rage is about to throw the entire company in prison right away. Suddenly, Count Lionetto appears from the tower dressed as a goose and tossing gold dollars to the ground. He attempts to appeal to Don Pippo’s better nature, saying that everyone should marry only for love and declaring himself both the Goose of Cairo and the Deluded Bridegroom.

In the four years after the composition of Die Entführung aus dem Serail in 1782, Mozart was flirting with the comic opera genre. ‘I have looked through a hundred libretti, and more,’ he wrote to his father in Salzburg, ‘but have not been able to find even one with which I am satisfied.'

'The chief thing is the comic element – I know the taste of the Viennese,’ wrote Mozart to one of his potential librettists, while still looking for a new libretto for his latest opera. The fruit of this labour was L’oca del Cairo (The Goose of Cairo), an abortive project if there ever was one. It is perhaps a measure of Mozart’s desperation that he should not only be prepared to consider collaborating on a comic opera with Abbate Varesco, the librettist of the opera Idomeno, who, as he admitted, had ‘not the slightest knowledge or experience of the theatre’, but should actually work on so barren a tale off and on for six months before finally acknowledging that it was hopeless. The story of an old Marquis who betroths his daughter to a man she doesn’t like, and keeps her shut up in a tower from which the daughter’s true love can rescue her with the help of a giant mechanical goose, certainly wouldn’t join the pantheon of drama.

In a letter written after his return to Vienna, Mozart mentioned that he and Varesco discussed the opera in person. Varesco set to work at once and provided him with a draft of the libretto of the first act. Some of the eight numbers which survive, mostly in sketch form and all from Act I, were written in Salzburg, and some on the journey back home. The finale was sketched in Vienna in December. By then, he was having serious doubts about the mechanical goose: ‘My only reason for not objecting to this whole business,’ he told his father, ‘was that two people of greater penetration and judgement than I had no objection to it – that is, yourself and Varesco.’

This, though surely meant ironically, is a lame excuse. Mozart should have realised much sooner that the Abbate was out of his depth and incapable of creating a comedy with characters and situations that are even remotely realistic. Later, when he found that Varesco has written in the margin of Act II that ‘the music of the preceding cavatina will do for this’, Mozart finally lost his temper. ‘That is out of the question. In Celidora’s cavatina the words are disconsolate and depressing, whereas in Lavina’s they are comforting and full of hope. Besides, for one singer to echo the song of another is completely out of date. [...] Further, the audience would hardly be able to tolerate the same aria from the second singer, having already heard it sung by the first.’

Still, Mozart soldiers on – the letter is full of constructive criticism for improving the libretto. However, the next letter reveals that L'oca del Cairo has been put on one side. Mozart had to focus on other works to bring in money faster. By this time, the Goose was well and truly cooked, and nothing further was heard from it.

Another opera fragment, Lo sposo deluso (The Deluded Bridegroom), probably dates from about the same time. It may be the libretto Mozart mentioned in a letter: ‘An Italian poet’ brought him a text, which ‘I shall perhaps adopt if he agrees to adjust and tailor it to my liking,’ he wrote. The poet is often assumed to be Da Ponte himself.

Though neither of these attempts got anywhere, it was not all wasted effort. Writing the ensembles provided Mozart with useful experience towards acquiring the mastery of the contemporary style of opera buffa, infused with his own inimitable personal voice. This is especially true for the finale of L'oca del Cairo, which is through-composed and with two opposing groups, in which the roles are delineated further through distinct musical characterisation. This was the prelude to Mozart’s great Da Ponte-operas: Le nozze di Figaro, Don Giovanni, and Così fan tutte.

Szilveszter Ókovács, General Director of Hungarian State Opera, first came up with the idea 25 years ago of combining these two unfinished works into a unified whole. With the help of conductor Pál Németh and director Attila Toronykőy among others, that idea has now come to fruition on the brand new Bánffy Stage at the Eiffel Art Studios in Budapest.