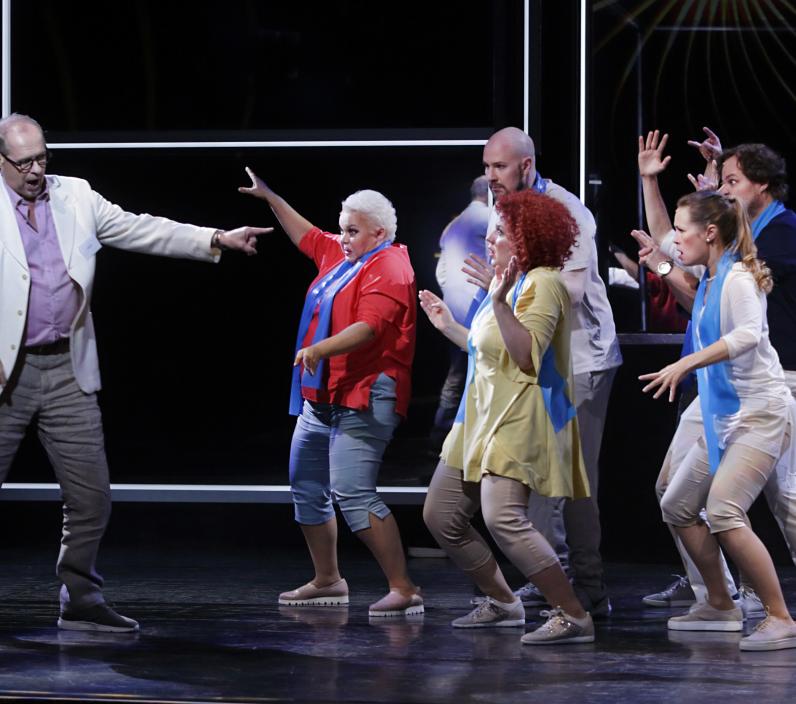 Rantala
This performance is no longer viewable as video-on-demand for rights reasons but other material about the production is still available.

A woman on the verge of divorce hopes to shed her excess kilos over the weekend at a much-lauded sanatorium, until her husband checks into the same facility.

Composed by jazz pianist Iiro Rantala and written by best-selling novelist Minna Lindgren, Sanatorio Express is a side-splittingly funny opera about modern neuroses and relationships. A great introduction to opera for first-timers, it will also please aficionados with its deep connection to the tradition of comic opera.

A soprano (Johanna Rusanen) hopes to shed her excess kilos over the weekend at a much-lauded sanatorium. After checking in with the receptionist (Päivi Nisula), she sings about her struggle to lose weight and her lifelong love of food.

The Healer and his assistant, the Receptionist, operate Sanatorio Express, which gives its customers personal attention and exercises to recover from the trials and tribulations of life. The ambience is heavenly.

The Soprano arrives at the Sanatorium because she is overweight and believes she’s on the verge of divorce. She sings an aria in two parts, the first of which is slow, detailing the reasons behind her excess weight. The second part, a joyful cabalette to the pace of waltz, is dedicated to the joys of eating.

Customers compare notes on their troubles. Most have been diagnosed as addicts, and addiction is behind all their adversity. Only the Tenor remains quiet. He is too slow for this world.

The Healer uses all his strength on the Soprano. As he makes a pass at her, she shoos him off the stage, but she’s left wondering: Was this lewd man interested in her? The Receptionist responds to her aria with a flamenco number, based on years of experience.

The Tenor steps out. He is in love with the Soprano and sings an aria about the woman’s small hands. It grows into a love duet, as in opera the sopranos fall in love even quicker than tenors.

Customers focus on self help exercises, while the Receptionist tackles crosswords. The Soprano, now deeply in love, begins to doubt whether being thin would solve her problems after all. Frustrated, she bursts into an ecstatic, bel canto like song. The Tenor’s calming coloratura fails to make her feel better.

The Soprano’s husband, a managing director with the appearance of a hound, rushes into the Sanatorio to rage at his wife. The Tenor challenges him to a duel. When they fail to find a peaceful way to battle, the husband sings a song about shame. The act ends in general confusion. Everything is shamefully baffling.

Time has passed. In the face of ever tougher challenges, Sanatorio Express has changed its focus to deep therapy, which has left the customers rather confused. The Healer tries to boost their motivation by singing about death, which is lurking just around the corner. Once recovered from the death scene, he presents the model patient: the Soprano’s husband. He has chosen distance therapy and says hello to the rest via the internet.

Things are going as the Receptionist planned: people are running in the semi-darkness wearing masks. The Healer turns up and nearly ruins everything. The husband gets angsty in the cupboard, but he can’t get out. The Soprano relents and helps out, finally understanding why she wasn’t good enough for her husband. She and her husband say their wistful goodbyes.

The Healer tries to slip away, distracting the crowd with a loud bass laughter, but he can’t escape. He has to deal with scathing customer feedback and face the facts. Everyone is overjoyed to discover that there was nothing wrong with them after all, and the episode has produced a few happy couples too. Sanatorio Express is closed down, but the Receptionist already has a new business idea.

In the 18th century, the audience would go to the opera to have fun. This was particularly the case in Naples. Because serious opera was so deeply somber, it became a custom to perform something funny during the intervals. This was how comic opera, or opera buffa, was born. It was opera’s lighthearted and carefree little sister that later grew up and became the operetta, a genre with a slightly dubious reputation.

For a long time, the essential difference between the serious and the comic opera was the fact that only comic operas were set in the present day. They would comment on topical phenomena, while serious opera would focus on an ideal world in the ancient past. Sometimes it’s hard for us to understand the humour in Mozart, Donizetti or Rossini’s operas. We don’t live in a strict class society, so we don’t immediately empathise with the maid who is scheming to marry her master.

Behind all that is funny, however, there will be something serious. In opera this seriousness stems from the music, which touches the audience deeply even in the midst of the comedy. This is why so many consider the end scene of Mozart’s The Marriage of Figaro, in which the countess forgives the count, the most wonderful scene in the history of opera. In fact, forgiveness is the essence of all Mozart’s classic operas, and Mozart’s status as the incomparable opera genius owes itself to his ability to combine the comical and the serious. This is also what Iiro Rantala wants to achieve in Sanatorio Express. As the librettist, I’m merely a happy servant to the visions of the composer, just like my teacher Lorenzo da Ponte.

But what is it that makes something funny? Well, it can be anything. Iiro Rantala and I don’t see creating humour as difficult. If I’m honest, I don’t think anything we do is particularly difficult. Making Sanatorio Express was not painful, we just made it and enjoyed the ride. The audience may also get a certain sense of that, as when you throw yourself into something, the end result is often painfully touching. To someone, that pain comes from dealing with being overweight, to another it’s about the burden of shame, and to someone else it may be about divorce or loneliness. When Iiro Rantala’s otherwise fast-paced music stops beautifully to contemplate these issues, words are no longer needed.

Of course seriousness is funny, too. And opera, if anything, is very serious. When the context is so constrained by customs and habits, you only need to be a little bit disruptive to create something funny. The director, Maria Sid, already realised this in our very first meeting. When we told her what we saw as a wickedly funny story with its naughty jokes and presented some scenes to her, she exclaimed joyfully: “But this is all so very serious!” That’s when I knew we couldn’t find a better director for Sanatorio Express.

Sanatorio Express follows the format of early 19th century comic opera with rather unimaginative precision. First the choir lays out the time, the place and the atmosphere, then the soloists present themselves with arias that are often divided in two parts. Next, relationships are mixed up and grand emotions burst forth through music. Group scenes from duets to quintets are an essential element in telling the story. The two acts culminate in a grand finale in which everyone is blasting out their own thoughts. In the latter scene all problems are solved by changing clothes and running in the garden.

We picked a load of things from the long list of modern day phenomena that cause pain and anguish. In our welfare state over-diagnosing gives everyone a reason to feel unwell. Nobody is normal, because the idea of normality is discriminating. We are all equally and uniquely überhuman, subhuman and special. Diagnosis kick starts business, also called therapy, medication and treatment. The restlessly busy especially special modern human being has created a need for quack doctors who sell express cures for every ailment.

Of course, there is a true story behind all this. I read an article about the old tuberculosis sanatoriums and rest homes in the Alps, which have been updated into express sanatoriums. Their most popular treatments are weekend cures for divorces. This sounded like a comic opera to me. Quack doctors have always existed, it’s just their methods that change. While we’re no longer sold love potions, we’re happy to test out fern brushing or unicorn therapy. I don’t mean to put down anyone’s pain, quite the opposite. I simply hope that everyone would learn to appreciate themselves and could laugh with sincerity in the opera audience.

Minna Lindgren is a writer and journalist known for her whimsical writing style and fearless approach to any topic she tackles.

A musicologist by training, she has written several nonfiction books on classical music, but in the last few years has become better known as the author of the Twilight Grove Trilogy, a warm and satirical mystery series that follows a group of bright, spirited and inquisitive 90-something ladies in a Helsinki retirement home.

She likes to get involved in a bit of everything, but her particular passions include opera, football and church bells. Before Sanatorio Express, she collaborated with Iiro Rantala on radio and television programmes and a musical. Her retirement plan includes three daughters and two cats.