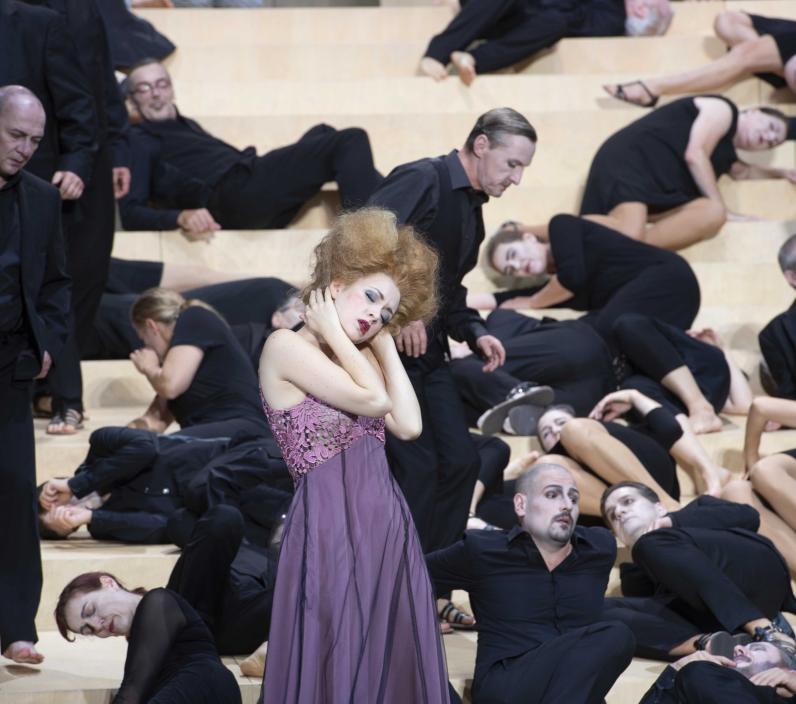 Henze
This performance is no longer viewable as video-on-demand for rights reasons but other material about the production is still available.

When a self-righteous young man ascends the throne of Thebes, he outlaws worship of the god of wine. But a stranger is set on subverting his authority with unruly rituals where anything goes.​

Hans Werner Henze’s musical drama in one act is a blood-soaked tragedy about political demagoguery and the seduction of the masses. In Barry Kosky’s production, the orchestra becomes the battle scene for the antagonistic principles, breaking the physical boundaries of the orchestra pit and pressing onto the stage, where it becomes both witness and accomplice in the unfolding events.

On Mount Cithaeron, the Bassarids have entered into a state of ecstatic frenzy. They praise Dionysus (Sean Panikkar) for having given them the strength to kill what they think is a lion in a ritualistic act of sparagmos. But the hermaphroditic seer Tiresias (Ivan Turšić) calls out to Cadmus (Jens Larsen), who realises that something very wrong has just happened. Conducted by Vladimir Jurowski and directed by Barrie Kosky.

At your bier side

When Agave (Tanja Ariane Baumgartner) realizes that she is not holding the head of a young lion in her hands but the remains of her own son, Penthée, she mourns his death. Conducted by Vladimir Jurowski and directed by Barrie Kosky.

Cadmus, son of King Agenor and brother of Europa, was instructed by the goddess Athena to sow the teeth of a dragon he had slain. Out of the ground sprang armed men, who helped Cadmus found the city of Thebes. Cadmus married his youngest daughter, Agave, to one of these men, Echion. His second daughter, Semele, was consumed by love for Zeus. The supreme god’s consort, Hera, taking on the appearance of Semele’s nurse, Beroë, persuaded Semele to demand that Zeus show himself to her in his divine form. The blazing splendour of the father of the gods burned Semele to ashes. Zeus, however, saved her unborn child, Dionysus, and sewed him up in his thigh – out of which Dionysus was born a second time. Semele’s tomb in Thebes became a shrine.

Pentheus, son of Echion and Agave, has succeeded his grandfather, Cadmus, to the throne of Thebes. As people await their new ruler, the voice of a stranger announces from afar that Dionysus has come to Mount Cithaeron. The masses follow the call and join Dionysus’s retinue, the Bassarids, who worship the god in ecstatic, intoxicated rituals.

While Cadmus warns that one should not get on the wrong side of the new god, his daughters Agave and Autonoë cast doubt on Dionysus’s divinity. The hermaphroditic seer Tiresias, on the other hand, is keen to take part in the orgiastic rituals. Pentheus proclaims an absolute ban on all worship of the alleged god Dionysus and his mother Semele. Agave, Autonoë and Tiresias, however, fall under the stranger’s spell when they hear him calling again, and set off for Mount Cithaeron.

Pentheus dismisses his grandfather’s repeated warnings and gives orders for all devotees of Dionysus to be locked up. The captain of the royal guard brings the captives from Cithaeron, among them Agave, Autonoë, Tiresias and the stranger. Pentheus attempts to question his mother, who is in a trance, about the goings-on on Mount Cithaeron, but gets nothing out of her. Beroë, Pentheus’s nurse, tries without success to warn the young king about the stranger, whom she has recognized as the god Dionysus. Pentheus interrogates the stranger, who is unmoved by his threats and outbursts of violence. The king orders the stranger to be incarcerated and tortured. But the next moment, the stranger once again stands unharmed before Pentheus, who increasingly succumbs to his seductive words.

Tiresias, Agave, Autonoë and the captain of the royal guard perform a play, The Judgement of Calliope. It tells of the siring and unconventional ‘birth’ of Adonis (played by the captain) – a handsome youth claimed by both the goddess of love Venus (Agave) and the queen of the underworld, Proserpina (Autonoë). Calliope (Tiresias), the muse of epic poetry, is to adjudicate in the dispute between the two goddesses. She makes an equitable judgement, awarding each goddess the coveted youth for one third of the year, with Adonis having the remaining third to himself. At the end, Adonis reports that he was gored to death by Venus’s jealous lover, the war god Mars, who had taken the shape of a wild boar. The piece ends with a lament by all the players.

Increasingly under Dionysus’s spell, Pentheus is determined to see for himself what is happening on Mount Cithaeron, and goes there disguised as a woman. Dionysus rouses his followers against Pentheus. The frenzied mass of Bassarids, including Agave and Autonoë, kill the intruder.

Full of foreboding, Cadmus and Beroë await the return of the Bassarids. They enter triumphantly, led by Agave, who proudly presents her bloody trophy. Cadmus confronts his daughter with the reality: she gradually comes to realize that what she is holding is not a young lion’s head but the mortal remains of her own son.

The stranger reveals himself to all as the god Dionysus. He banishes the royal family from the city and commands that the palace be burnt down. He calls on Persephone, the Greek equivalent of Proserpina, to free his mother, Semele, from the clutches of Hades so that she can take her place among the immortals as a goddess on Mount Olympus.

5 things to know about The Bassarids

In ancient Greek religion and mythology, Dionysus is the god of wine, fertility, ritual madness, religious ecstasy, and theatre. Also known as Bacchus, the name adopted by the Romans, he inspired a cult in which its adherents used intoxicants and trance-inducing techniques to remove their inhibitions and social constraints. His female followers roamed the mountains and forests in fox skins performing frenzied, ecstatic dances. While under his influence, they were supposed to have unusual strength, including the ability to tear animals or people to pieces. These women were known as Maenads, meaning ‘madwoman’, or as Bassarids, which comes from the Greek word for a fox skin.

The Dionysia were a pair of large rural and city festivals in ancient Athens in honour of Dionysus, the central events of which were the theatrical performances of dramatic tragedies and comedies. In 405 BC, the Athenian playwright Euripides won first prize at the City Dionysia with his tragedy The Bacchae. In the play, Dionysus returns to his hometown of Thebes in disguise. His agenda is to force the inhabitants to remember his relevance by making the king’s mother kill her own son. With the sacrifice taking place in the wilderness beyond the city in the darkness of night, as opposed to within a temple, Euripides’s depiction of the cult of Dionysus highlights the archaic and uncivilised side of pagan religious practice. The Bacchae is considered one of the greatest tragedies ever written, and is distinctive in that the chorus is integrated into the plot and the god is not a distant presence, but the protagonist of the play.

For his 1961 opera Elegy for Young Lovers, the German composer Hans Werner Henze enlisted the writing skills of the English-American poet W. H. Auden and his partner, the American poet and translator Chester Kallman. Auden had previously written the libretto for Benjamin Britten’s Paul Bunyan and had worked with Kallman on the libretto for Igor Stravinsky’s The Rake’s Progress. In an interview for The Musical Times, Henze explained how his collaboration with Auden and Kallman on The Bassarids came about: ‘After the Glyndebourne production of Elegy for Young Lovers, I said to them that I would very much like to work with them again, and Auden said something about doing The Bacchae. Then I read the Euripides, and I was very impressed. I wrote to them in New York, and they sent me this libretto, which is very much based on Euripides - it’s not a free interpretation; it only adds 2,500 years of experience, so to speak.’ The opera received its premiere at the 1966 Salzburg Festival in a German translation by Maria Basse-Sporleder.

A central topic of The Bassarids is the conflict between the ambitious and rational King Pentheus and the proud and charismatic god Dionysus. Pentheus’s righteous reign leaves little room for venerating the god of wine, who fights to get recognised as an important part of people’s lives. Henze wrote the opera after having left Germany for Italy because of a perceived intolerance towards his leftist politics and homosexuality. For him, The Bassarids is not a glorification of blind ecstasy but a warning about what could happen if pleasure is systematically repressed. As he explained in the Musical Times interview: ‘The Marxist-Freudian view of it would be that Dionysus is right: the dignity of man is inseparable from the dignity of his physicality. Pentheus tried to split these two: he thought it was possible to reject one’s genitals. And Dionysis asks mankind to say yes to life.’

Henze took part in the famous Darmstadt International Summer Courses for New Music and worked with twelve-tone techniques in his early years. After moving to Italy, however, he abandoned the strict, unemotional dogma of German contemporary music theory and achieved new and varied forms of musical expression. With its four movements and an intermezzo, The Bassarids is structured less like an opera and more like a classical symphony. The score includes quotes from Johann Sebastian Bach’s St. Matthew’s Passion and the English Suite in D minor and the rhythms are inspired by southern Italian folk songs. The music of Gustav Mahler was also a clear influence on the rich orchestration, which, as director Barry Kosky points out, is the perfect vehicle for ‘the brutality, sensuality, eroticism, fear, anxiety, trauma, beauty, joy and ecstasy that Henze portrays in his extraordinary score’.