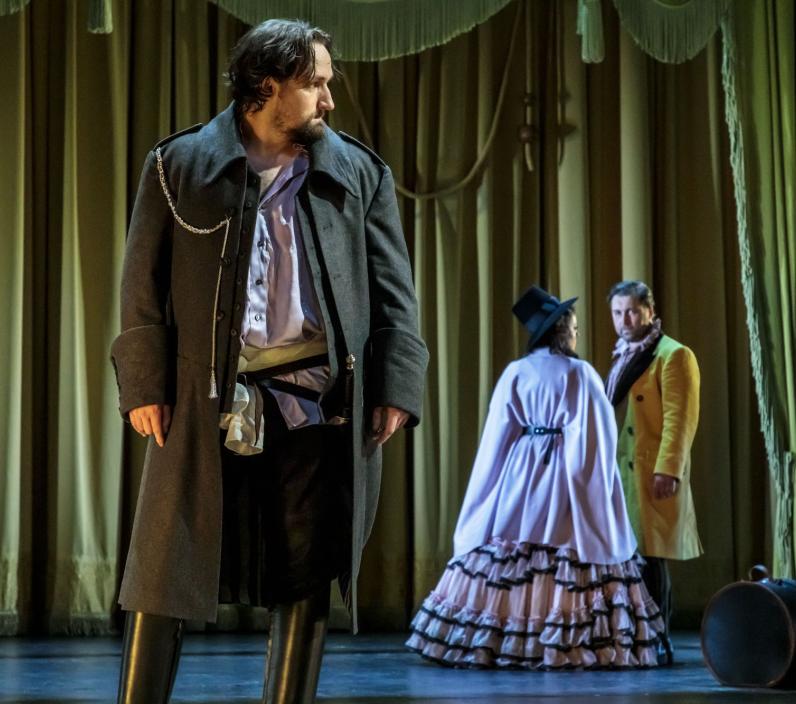 The insatiable Don Giovanni is not picky: anyone will do, from Donna Elvira to her maid and the bride at a country wedding. But when one of his conquests ends in murder, he sets off a chain of events that takes him forever closer to his bitter fate.

For the first time, Prague’s Estates Theatre, where Don Giovanni premiered some 230 years ago, calls on a director from overseas to stage Mozart's opera. Will Alexander Mørk-Eidem’s new production break with its long tradition of the famous rake’s last day? Is his Giovanni an incorrigible slave to his instincts? Is he a provocateur? Or a mere catalyst around whom Mozart thoroughly depicts the constantly changing universe of female emotions?

What is it like to stage Don Giovanni in its birthplace? Over 230 after its premiere at the Estate Theatre in Prague, director Alexander Mørk-Eidem, conductor Karsten Januschke and singer Pavol Kubáň reflect on stepping into Mozart's footsteps and forging their own path.

During one of his night-time escapades, the philanderer, libertine and rebel Don Giovanni attempts to seduce the Commendatore’s daughter, Donna Anna. After failing to get his way, the masked nobleman tries to run away, yet Anna’s father blocks his path and compels him to fight a duel. Giovanni kills the Commendatore with his sword, and he and his servant Leporello escape. Upon finding her father’s dead body, Anna makes her fiancé Ottavio swear to avenge the murder.

Giovanni does not have much time to recuperate. Donna Elvira arrives in the town, seeking the man who had promised to marry her yet fled. It turns out that her former lover is none other than Giovanni. Elvira too is determined to take revenge – unless Giovanni’s desire for her rekindles and he keeps his pledge. Having no intention of complying with her wish, Giovanni flees, leaving his servant to deal with her. Leporello tells Elvira that Giovanni is not worthy of her love and proceeds to reveal to her the catalogue of the innumerable women his master has seduced, adding that expecting him to be faithful would be rather naïve …

In the meantime, Giovanni embarks on a new amorous adventure. After joining a marriage procession in the nearby village, he is immediately attracted to the young bride, Zerlina, which, naturally, enrages the groom, Masetto. Giovanni offers to host a wedding celebration, whereupon Leporello leads the peasants to his master’s mansion. When Giovanni and Zerlina have a moment alone, she almost yields to his seductive wiles. To Giovanni’s annoyance, the jealous Elvira appears and takes the less experienced Zerlina away.

Giovanni encounters Anna and Ottavio. They ask him for help in their quest for the still unknown murderer of the Commendatore, unaware that they are speaking to him. Ottavio has no inkling as to who Giovanni is, while Anna seems not to suspect him either, but – as we will see later – one cannot be absolutely sure of anything with a woman of her type ... What is more, Giovanni’s situation is further compounded when Elvira returns, openly branding him a liar and impostor. Giovanni responds to the accusations by claiming that Elvira is insane.

As Giovanni leaves, Anna suddenly recognises him as the man who attempted to seduce her and subsequently killed her father. She insists that Ottavio take robust action against Giovanni, and avenge her honour and the Commendatore’s death. Ottavio, however, a rather good-natured man in love, is reluctant to play the hero and avenger ...

Meanwhile, Giovanni and Leporello plan to host a debauched night-time revelry, during which the former should add new names to his catalogue of conquests. Zerlina is the first Giovanni intends to seduce. Yet this plan too is thwarted by Elvira, who has joined forces with Anna and Ottavio. The three arrive at Giovanni’s party in disguise. At a timely moment, they take off their masks and denounce Giovanni. Despite the threats made against him, Giovanni manages to escape.

Following the latest incidents, Leporello resolves to no longer serve Giovanni and threatens to leave his master. Yet Giovanni needs him for materialising his upcoming plans, and so – as always – he convinces Leporello to stay by offering him money. A new object of Giovanni’s lust is Elvira’s maid.  So as not to raise suspicion, he orders Leporello to swap clothes with him. When Elvira appears at the window instead of her maid, Giovanni lures her outside, but after she descends to the street, Leporello, continuing to pose as his master, leads her away. The coast is now clear, and Giovanni proceeds to sing a serenade to Elvira’s maid.

Yet before he can complete his seduction, Giovanni faces a new danger, when he is confronted by Masetto and his friends, looking for the man who led Zerlina astray. Still posing as Leporello, Giovanni cunningly disperses the group and thrashes the gullible Masetto.

Leporello is just as lucky as his master. Disguised in Giovanni’s cloak and hat, he falls into the hands of Ottavio and Anna. Believing that Leporello is Giovanni, Elvira tries to save him, begging the couple to spare his life, yet to no avail. The desperate Leporello reveals his true identity and, making use of Ottavio and Anna’s astonishment, disappears.

In the wake of the dramatic twists, Giovanni and Leporello reunite at the cemetery, near the memorial to the Commendatore. Giovanni’s taunting of Leporello is interrupted by a mysterious voice coming from the statue on the tomb, warning the rake that he will be condemned to eternal perdition for his sins. Giovanni laughs at the words and orders the trembling Leporello to invite the Commendatore’s statue to dinner.

Ottavio urges Anna to marry him, yet she declines, claiming that it is too soon after her father’s death. But she assures her fiancé about her love and fidelity.

Giovanni savours an opulent dinner. He is approached by Elvira, who implores him to change his immoral ways. Giovanni ridicules her, whereupon she gives up and leaves. To his bewilderment, soon after Elvira’s departure he sees the Commendatore’s spirit appear. The ghost offers him the last chance to repent, but Giovanni refuses adamantly and descends into Hell...

The mysterious ‘opera of operas’

The opera Il dissoluto punito ossia Il Don Giovanni (The Rake Punished, or Don Giovanni) is generally deemed one of Mozart’s finest works. Ranking among the world’s most frequently staged operas, it has influenced and inspired numerous artists and thinkers since the late 18th century. E. T. A. Hoffmann branded it the ‘opera of operas’, a designation still used today. Gustave Flaubert said that the sea, Hamlet and Don Giovanni were the best things God had created. And with regard to the global fame Mozart’s masterpiece has enjoyed, Praguers claim that the opera is above all ‘theirs’ – for it was written for Prague, with Mozart perhaps even having taken into consideration the local taste and theatre tradition.

When looking at Don Giovanni, we should first and foremost admit that in many respects this mature work of Mozart’s is highly non-Mozartean. No other opera of this ilk can be found in his oeuvre – not even among those operas that are customarily labelled as ‘mature’. Judging by his life and work, Mozart appears to have been a very secular person, an enlightened rationalist and liberal. With the exception of Idomeneo, featuring the voice of Neptune, and the fairy-tale wonders in Die Zauberflöte, his operas are devoid of supernatural motifs and metaphysical subjects. Similarly, Mozart never deals with morality that is not down to earth, not stemming from practical intellectual cognition and unprejudiced respect of the human to human. Let alone official Christian morality, that is enforced by means of threatening with eternal perdition and infernal torment.

Linking up to this is another, very ‘non-Mozartean’ trait of Don Giovanni: mindful of Classicist restraint and taste, in none of his other operas does Mozart explicitly depict death – by the way, death would become one of the major thematic pillars serving as the basis for the future development of opera... For Mozart, death seems to be beyond the horizon of his operatic world – now and then looming, yet never openly striking. But lo and behold, in Don Giovanni we can observe with our own eyes the death of two people, one of whom even descends to the Christian Hell, from which bloodcurdling voices roar!

So what made Mozart and his librettist, Da Ponte, set out for these distant thematic shores? Why did they take up the Baroque moralistic subject of the blasphemer and transgressive rake who is punished for his sins by being devoured by infernal flames? What importance could they have attached to such a denouement? Did they simply regard it as a de rigueur element of the story, whose theatrical effect the audience would expect, while directing their main focus elsewhere, to, for instance, elaborate description of all kinds of imbroglios resulting from erotic relationships, as in the other two operas they created together, Le nozze di Figaro and Così fan tutte? Did the two secular freethinkers endorse the notion that the lecher’s grisly demise was well deserved? And if it was at variance with their worldview, why did they give their opera a title as explicitly moralistic as The Rake Punished? Why did Mozart depict the scene of Giovanni’s encounter with an underworld being and the sinner’s subsequent descent into Hell so vividly that even two centuries on it has not lost any of its urgent and blood-chilling forcibility?

But what if the enlightened bon viveurs Mozart and Da Ponte simply considered the expressive Baroque scene of Giovanni’s damnation a suggestive metaphor of human mortality, finitude and cruel unpredictability? A harsh admonishment of the fact that all the pleasures of life can suddenly come to nothing? It is highly unlikely that Mozart, who viewed human stumbles, especially those pertaining to amorous relationships, with benevolence, would champion eternal punishment and view Hell as a fitting destination for the rake. By and large, the Mozart mindset, which seems still so agreeable to us today, is at odds with such an attitude. After all, that is evidently one of the reasons why in modern and postmodern theatre adaptations the motif of Giovanni’s perdition and death have been somewhat sanitised and shorn of the erstwhile religious/moralistic ballast: for instance, in the duel with the Commendatore at the beginning of the opera Giovanni sustains an injury that at the end will turn out to be the true cause of his death, as is the case in Alexander Mork-Eidem’s new production of Don Giovanni, staged at the Estates Theatre. No matter if we construe Giovanni’s injury naturalistically or metaphorically, Giovanni, just like every one of us, is simply bound for the grave. And for that the existence of Hell is not necessary.

After all, connected with this is the mystery of who actually is the lead character in Mozart’s Don Giovanni. The man to whom Mozart may have granted three great chances to peep into his inner self, three complete arias of his own, which, however, show the title character as a totally superficial person with a very shallow, banal inner universe, arias, or rather ditties, that amidst the expansive score of Mozart’s opera fall woefully short of the masterful musical portrayals of the three female characters – Elvira, Anna and Zerlina. As a matter of fact, Mozart paradoxically scrimped on Giovanni, the character around whom everything seemingly revolves, and applied his paramount art of expressing in tones joyous, lofty, low and quizzically mixed human emotions to women – just like in many, if not all, of his grand operas ...