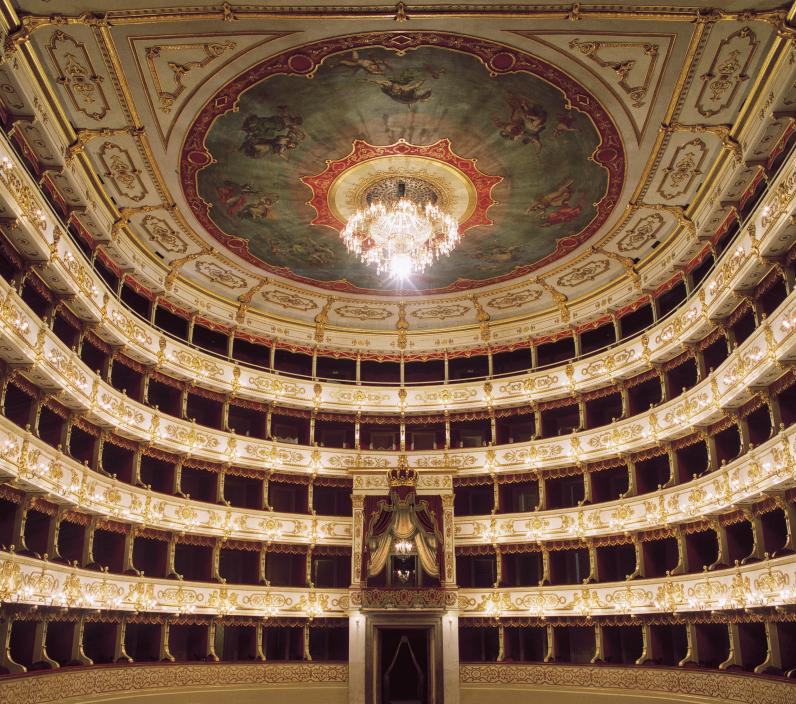 The Teatro Regio di Parma is renowned among the world’s most famous opera houses for the elegance of its neoclassical style, its perfect acoustics, its closeness to the figures of Giuseppe Verdi, Arturo Toscanini and Niccolò Paganini and its prestigious history. Every year since 2001, around October 10 –  Giuseppe Verdi’s birth date – the Teatro organises the Festival Verdi. A considerable undertaking, the Festival presents a rich and varied programme stretching over a month with the performance of 4 operas rotating over 4 consecutive days. Awarded as Best Festival at the International Opera Awards, Festival Verdi brings opera, concerts, seminars, new site-specific installations in different theatres and on different stages, with first-rate commissions, original productions, shows for the young and new audiences where the music of Verdi meets contemporary languages.

Since 2016, the programme of Festival Verdi has been enriched by Verdi Off, a series of over a hundred free events aimed at instilling and sharing the passion for Verdi’s music in a festive atmosphere, set in Parma and its surroundings.
Every year, the Opera Season and the Concert Season of Teatro Regio di Parma host international soloists and chamber ensembles, as well as étoiles and international ballet and dance companies with ParmaDanza and the special events of RegioYoung conceived for families and students.

Built under Duchess Maria Luigia of Habsburg-Lorraine, wife of Napoleon and Governor of the Duchy of Parma and Piacenza, and originally called Nuovo Teatro Ducale, the Teatro Regio di Parma opened on 16 May 1829 with the opera Zaira, composed for the occasion by Vincenzo Bellini.

The Teatro was designed on a project by architect Nicolò Bettoli. With 380 stall seats, four tiers of 30 boxes and the gallery, its overall capacity is currently of 1150 spectators (originally, over 2000). Teatro Regio is one of the few theatres in the world to boast an original, historical curtain in perfect state, painted on canvas by Giovan Battista Borghesi. The historical backlit clock with counterweight charging system has recently been restored and it is functioning perfectly on the boccascena’s architrave.

Scenes, costumes and stage devices of over forty opera productions – created in the last thirty years by the set design and tailoring ateliers of Teatro Regio and designed by the most famous directors, costume and set designers – fly off to the world's most renowned theatres on tour.

The Regio houses the Accademia Verdiana, the academy dedicated to Verdi’s vocal repertoire, whose students perform at the highest levels thanks to the tutoring of artists and vocal coaches with exceptional expertise. In 2020, Teatro Regio founded the Academy of the Teatro Regio di Parma, inaugurated by the training programme. In collaboration with the City of Busseto, Teatro Regio also organises the Concorso Internazionale Voci Verdiane Città di Busseto.

Extract
I due Foscari
•

Rise and Fall of the City of Mahagonny