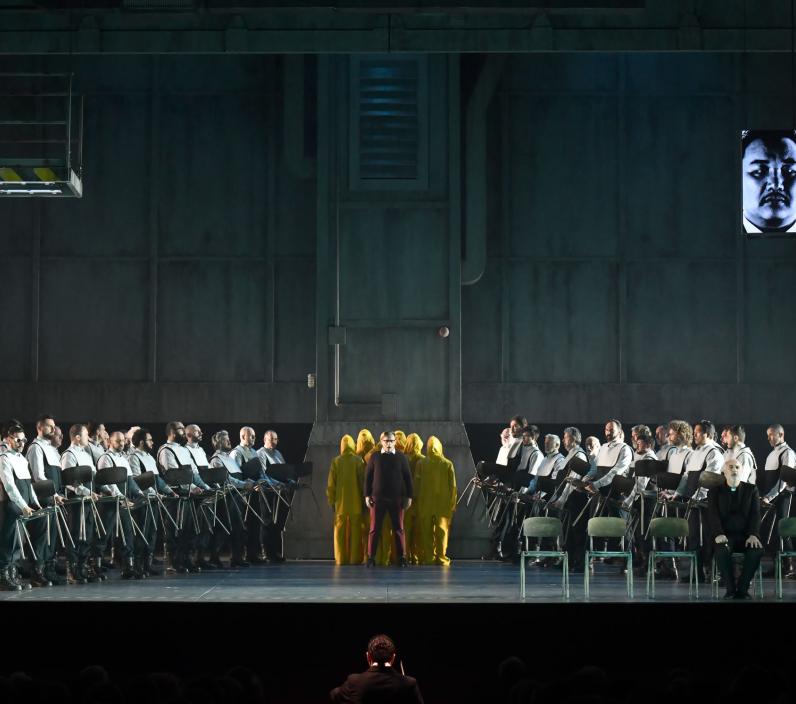 The opera that established Verdi’s greatness as a composer, Nabucco follows the plight of the Jews as they are exiled from their homeland by the eponymous Babylonian King.

This 2019 production from Verdi Festival Parma won critical acclaim for its directors, Stefano Ricci and Gianni Forte for whom opera is a means to question the world of today. The curtain rises in the bowels of a modern warship...

Act II. The High Priest of Baal, followed by Abigaille (Saioa Hernández) and the Assyrian populace, proclaims Abigaille ruler and pronounces a death sentence on the Hebrews. Unexpectedly, Nabucco (Amartuvshin Enkhbat) arrives: he takes the crown and places it on his own head. Conducted by Francesco Ivan Ciampa and directed by Stefano Ricci.

From its premiere in March 1842, Nabucco was a phenomenal triumph. Giuseppina Strepponi, Verdi’s second wife-to-be, sang the vocally demanding role of the evil Abigaille, though in ill form. While Act 1 was met with much applause, the audience flew into rapture at Act 3, scene 2 - none other than the Hebrew chorus’ lament ‘Va, pensiero’. The Chorus of the Hebrew slaves longing for their lost homeland in Babylonian captivity instantly became Italy’s unofficial hymn, which it has remained to this day.

'We know its theme: the theme of exile, of people taken forcibly from their land. It would have been quite easy to use the topic of the moment, the migrants, but we would have created a documentary effect that was not our intention; therefore we decided not to set the story in the present day, but ferry it to a near future, 2046.' Watch directors Ricci & Forte give insights about Teatro Regio Parma's production of Nabucco.

In the temple of Solomon, Jews lament the fate of the kingdom of Israel, which is under threat from the king of Assyria Nebuchadnezzar (Nabucco). High Priest Zaccaria arrives with news to partially revive spirits; the Jews are holding Fenena, Nabucco’s daughter, hostage. Perhaps with his mediation, the Assyrians will withdraw. The arrival of Ismaele, however, returns the anguish as he bears bad news: Nabucco’s arrival is imminent. Zaccaria entrusts Fenena to Ismaele, promising that the God of Israel will prevail over that of Baal. Ismaele is delighted for he has been in love with Fenena ever since she has saved him twice: once from Nabucco’s prison and then from the mad love of her elder sister, Abigaille. Of course, Fenena is now a slave, and she reluctantly reminds Ismaele of this. Undeterred, he swears to her freedom, but Abigaille appears before them along with Assyrian soldiers disguised as Jews. Upon seeing them, Abigaille accuses Ismaele of betraying his people and declares her love for him. A love that has now turned to hate. Meanwhile, the troops commanded by Nabucco are approaching. Abigaille precedes him and helps the Assyrians break into the temple. In the ensuing panic, Zaccaria reminds Nabucco that he has Fenena in his hands and threatens to kill her if he dares to desecrate the temple. Surprisingly, it is Ismaele who stops Zaccaria. Fenena runs into her father’s arms and Nabucco promises revenge. Zaccaria and the Jews curse Ismaele.

Abigaille has stolen a document from her father which shows she is not the king’s daughter but the child of slaves. She swears vengeance on Nabucco and his appointed heiress, Fenena. The High Priest of Baal, who sides with Abigaille, comes to say that Fenena has freed the Hebrew prisoners. As a result of her treason, the religious authorities have decided to offer Abigaille the throne instead, telling the people that their king has fallen in battle. She relishes the idea of the slave who becomes sovereign. Zaccaria, meanwhile, announces that Fenena, thanks to her love for Ismaele, has been converted to their faith. The aged palace adviser Abdallo rushes in to tell Fenena about the reports of the king’s death and to warn that her life is in danger. Before she can escape, the High Priest of Baal, followed by Abigaille and the Assyrian populace, proclaims Abigaille ruler and pronounces a death sentence on the Hebrews. Unexpectedly, Nabucco arrives: he takes the crown and places it on his own head. Everyone quakes in dread before the irate monarch, who announces he is not only a king but god, having overthrown both Baal and Jehovah. As he tries to force Zaccaria and Fenena to prostrate themselves, lightning strikes him. When he recovers, he seems upset and deprived of his senses and calls out to Fenena for help. Amidst the confusion, Abigaille retrieves the crown and disappears.

In the Hanging Gardens of Babylon, the High Priest of Baal and the populace hail Abigaille as ruler. The dishevelled Nabucco wanders in, hoping to sit once more on his throne. Abigaille dismisses the others and explains to Nabucco that she is serving as regent since he is not well enough to rule. Taking advantage of his insanity, she tricks him into signing the warrant condemning the Jews to death. Then Nabucco is struck with the realisation that his own daughter Fenena will also die. When Nabucco tries to find in his garments the document proving that Abigaille is an impostor, she confronts him with it and tears it to bits.
Nabucco is imprisoned. Desperate, he asks that at least Fenena be returned to him.  On the banks of the Euphrates, the Hebrews are resting from forced labour. Their thoughts ascend ‘on golden wings’ to their lost homeland. Zaccaria predicts they will overcome captivity and obliterate Babylon with the Lord’s help.

In his palace, Nabucco sees Fenena being dragged to her execution. Desperate, he kneels to pray to the God of the Hebrews for forgiveness, pledging to convert himself and his people. His reason returns. Crying for a sword, he rallies Abdallo and a group of faithful soldiers to regain the throne. In the Hanging Gardens, executioners stand ready to do away with Zaccaria and his flock. The old man hails Fenena as a martyr, and she asks the Lord to receive her into heaven. However, Nabucco arrives and orders the statue of Baal destroyed. As if by supernatural powers, it falls of its own accord and breaks. Abigaille takes poison and confesses her crimes, urging that Ismaele and Fenena be reunited. Dying, she prays to the God of Israel to pardon her.
Nabucco tells the Jews to return to their native land and rebuild their temple, declaring that he himself now serves Jehovah. The crowd acknowledges a miracle and renders praises to God.

Late in life, Verdi famously called the 1840s his ‘years in the galley’: lean years both professionally and personally. The public failure of his second opera Un giorno di regno was only topped by private tragedy. After the death of his wife and two small children, Verdi swore never to compose again. Yet La Scala’s impresario Bartolomeo Menelli incited him to turn Temistocle Solera's libretto ‘Nabucodonosor’ into an opera.

According to legend, once at home, Verdi indifferently threw the libretto on the table, where it opened on the memorable lines ‘Va, pensiero, sull'ali dorate’ - Fly, thoughts, on golden wings. Inspired, he began reading other passages, becoming increasingly engrossed in their biblical breadth and dramatic intensity. By morning, Verdi later claimed, he had learned the libretto by heart. And yet, his determination not to compose again remained steadfast. It took time and a lot of cajoling from Menelli for Verdi to overcome his resistance. How fortunate that Verdi changed his mind, for Nabucco would cement his reputation as a composer. ‘This is the opera with which my artistic career really begins. And though I had many difficulties to fight against, it is certain that Nabucco was born under a lucky star’, he later reminisced.

From its premiere in March 1842, Nabucco was a phenomenal triumph. Giuseppina Strepponi, Verdi’s second wife-to-be, sang the vocally demanding role of the evil Abigaille, though in ill form. While Act 1 was met with much applause, the audience flew into rapture at Act 3, scene 2 - none other than the Hebrew chorus’ lament ‘Va, pensiero’, based on the line that Verdi stared at months earlier. Immediately, the public’s thoughts flew to their own liberation, recognising that the imprisoned Hebrews symbolised none other than themselves: Italians subjugated by the Habsburg occupying force, dreaming of their country’s unification. The Chorus of the Hebrew slaves longing for their lost homeland in Babylonian captivity instantly became Italy’s unofficial hymn, which it has remained to this day. Even in the face of the Coronavirus crisis, Italians turn to the chorus: the International Opera Choir virtual recording, reflecting on the current loss of personal freedoms and safety, has become a viral success.

The interpretation equating Hebrews with Italians is so well-established that it seems futile to point out that Nabucco’s message far transcends its historical plot. If ever an opera gave licence to reimagine its classical staging, Nabucco is it. In Teatro Regio Parma’s 2019 production from its renowned Verdi Festival, stage director Stefano Ricci’s choice to set the story in a post-apocalyptic future ominously reflecting on our present can be understood in this light. His staging takes place in an Orwellian warship in the year 2046, in reference to Wong Kar-wai’s eponymous film. Nabucco has become a violent dictator promoting his own cult and spearheading obscurantist masses to oppress the Hebrews-cum-refugees. On the ship’s deck, various screens display the regime’s propaganda. The monochrome, claustrophobic scenery of the warship is filled with visually and symbolically striking images - life vests, shipwrecked people squatting under the illuminated faces of power - ubiquitous references to our current plights that are the migration crisis and the rise of populism.

Stefano Ricci
Nabucco is above all an awakening of consciousness, a journey of souls ready to rediscover the meaning of standing upright.

Transposing the timeless story of Nabucco’s spiritual and moral awakening into the near-future of a dystopian society is an undisguised commentary on Europe today, a Europe on the brink of an ethical choice.This narrative displacement does in no way detract from the drama’s effectiveness, but rather enhances its message by adding a layer of pressing topicality. As Ricci writes in his director’s notes, ‘Nabucco is not only an emblem of pride of a people fighting against a sanctioning power; it is not just a faded world chasing after demeaning axioms; it is not only this constant attempt to find a personal place of one’s own in a time that escapes the indissoluble thrones; it is above all an awakening of consciousness, a journey of souls ready to rediscover the meaning of standing upright.’

Given this allegorical power, it is no wonder that Nabucco established Verdi as a patriotic composer. His following operas would include inspirational anthems in the same vein. When Verdi died in 1901, the few people attending his simple funeral spontaneously starting humming ‘Va, pensiero’. A month later, his body was transferred with that of his wife Giuseppina Strepponi. Half of Milan’s population lined the streets during the funeral procession, while Arturo Toscanini conducted 800 people outside the chapel intoning the poignant chorus.