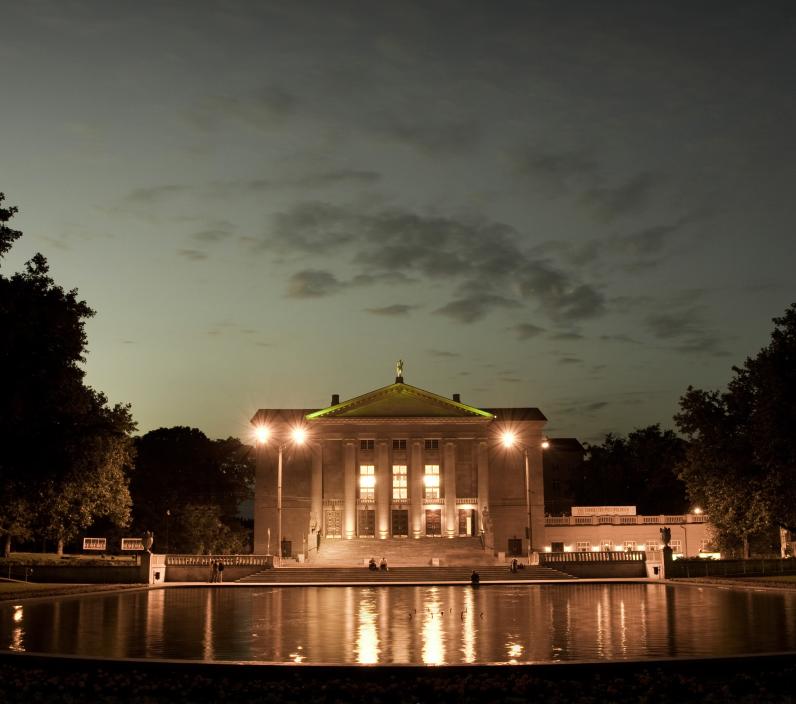 Poznań Opera symbolises over one hundred years of Polish opera history. The Opera House was built at the beginning of the 20th century, designed by German architect Max Littmann, and inaugurated in 1910 with Mozart’s The Magic Flute.

The façade of the building is a huge portico that was built according to the rules of classical architecture of ancient Rome. At the top of the staircase stand six massive Ionic columns with a triangular tympanum surmounted by a Pegasus statue, a symbol of the building. Each season we play performances for almost 200,000 viewers on 2 stages: main stage and chamber stage.

Renata Borowska-Juszczyńska is General Manager and Gabriel Chmura is Artistic Director of Poznań Opera House. The Ballet is run by Tomasz Kajdański.

The diversified repertoire of the theatre includes both classical operas and contemporary compositions with particular consideration of Polish operas. We combine tradition with modernity and discover new trends in opera by inviting interesting stage directors and visual artists.

Among the most valuable productions of past few years, the following ones are especially worth mentioning: Wagner’s Parsifal staged by Hotel Pro Forma, core Polish repertoire Halka by Stanisław Moniuszk, directed by Paweł Passini, Janáček’s Jenůfa in the acclaimed production by Alvis Hermanis (production by La Monnaie/De Munt), Musorgski’s Boris Godunov staged by Iwan Wyrypajew, Verdi’s Macbeth by Olivier Fredj (co-production with La Monnaie/De Munt), the new work by Elena Langer Figaro Gets a Divorce by David Pountney (production by Welsh National Opera), and Mozart’s The Magic Flute by Sjaron Minailo.