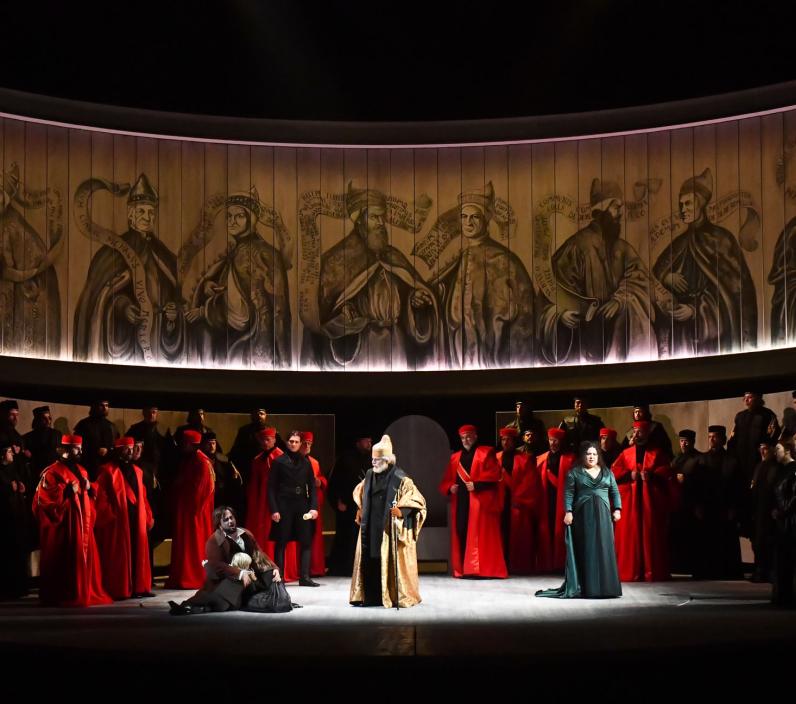 Torn between his duty and paternal love, the Venitian doge is forced to exile his son accused of murder. Hopes to prove his innocence run high when his son returns home, but don’t discount their intriguing enemies just yet.

I due Foscari sets out in despair and ends tragically. Its music, full of dark hues, awe-inspiring choruses and individual themes for the main characters, already paves the way for Verdi's later scores.

Act III. The Councilmembers have come to ask the Doge (Vladimir Stoyanov) to resign given his advanced age and his state of shock because of his son's death. Twice the Doge’s request to abdicate had been denied. He thus took an oath to remain in his functions until death, now he wants to honour his pledge. Directed by Leo Muscato and conducted by Paolo Arrivabeni.

In the Palazzo Ducale in Venice, the Council of Ten and the members of the government are meeting, among them Loredano and his friend Barbarigo. The two learn that the apparently serene Doge has preceded them into the chambers. Conducted out of prison, Jacopo Foscari, son of the Doge, waits to be summoned before the Council. He salutes his beloved Venice that he has not seen for so long because he has been exiled from the city. An official tells him to hope for an act of clemency, but Jacopo rants against the atrocious hate he has experienced. His wife Lucrezia Contarini pleads his case before the Doge, who after all is his father. The Doge replies that she may hope for heavenly justice. When she hears that Jacopo has once more been condemned to exile, Lucrezia gives vent to her fury.
The senators comment the sentence: Jacopo has not confessed, but his guilt is proven by the letter he sent to the duke Sforza in Milan. It is therefore right that he must return to Cretian exile. The impartiality of Venetian justice should be clear to everyone when even the Doge's son is condemned.
The Doge muses about his destiny as a prince, with his power much reduced by the Council of Ten, and as a father, unable to help his son in his misery. Lucrezia enters and pleads with her father-in-law to annul Jacopo's sentence, but the Doge tells her that Venetian law will not allow it. Seeing the Doge in tears over his son’s fate, Lucrezia begins to hope.

Wasting away in his cell, Jacopo perceives a ghost in a moment of delusion. Carmagnola, the famous commander executed in Venice, advance toward him holding his severed head. Terrified, he faints. He wakes up in Lucrezia’s arms. She has come to give him the sentence: not death, but exile, forcing them to part forever.
The Doge arrives and the three embrace, deeply moved. Jacopo now sees paternal love in his father instead of the former authoritarian severity. Accompanied by guards, Loredano arrives to inform Jacopo that the Council has decided that he must leave at once for Crete. The three embrace once again, but Loredano separates them mercilessly. Jacopo is taken away by the guards. The counsellors and governors unite to confirm the sentence. The Doge enters to preside. Jacopo is admitted, asking justice of his father and claiming his innocence, but the Doge can only advise his son to resign himself. Lucrezia arrives with Pisana and other ladies, holding their two children by the hand. Jacopo runs to embrace them and makes them kneel before the Doge, pleading for mercy. Barbarigo is touched by this scene and tries to soften the resolve of implacable Loredano in vain. Jacopo must return to Crete alone, without his family. Faced with this future, Jacopo senses that death is drawing closer.

St. Mark's square fills with people. Loredano and Barbarigo arrive and observe the happy crowd, oblivious of the Foscaris’ destiny. Suddenly, a galley is coming into port to take Jacopo to Crete. Before embarking, he bids farewell to Lucrezia and his children. But Loredano once more separates them to hurry up the departure. As Jacopo boards the galley, Lucrezia faints.
In his private rooms, the Doge bemoans his tragic destiny: three of his sons have died young and a fourth is now being banished. Barbarigo enters unexpectedly with a letter. A certain Erizzo has written to confess the crime of which Jacopo has been condemned. The Doge thanks the heavens, but his joy does not last. Lucrezia arrives in tears to announce Jacopo’s death at the moment the boat set sail.
Then the Councilmembers headed by Loredano are brought before the Doge. They have come to ask him to resign given his advanced age and his state of shock because of his son's death. Twice the Doge’s request to abdicate had been denied. He thus took an oath to remain in his functions until death, now he wants to honour his pledge. But the Council does not flinch. The Doge hands over the ring and the crown of office. Lucrezia arrives to accompany him out of the palace when Loredano tells him that Malipiero is the new Doge. At this news, the old man dies.

5 things to know about I due Foscari

Nowhere was the English poet Lord Byron (1788-1824) as esteemed as in Italy. This admiration was only mirrored by his own attachment to Italy, where he lived for seven years. A dazzling and provocative character, Byron sympathised with the Italian cause and wrote eloquently about their political plight. Settling in Venice in 1816 after many years of wanderlust, he engrossed himself in the city’s history.

Loosely based on historical events of the 1450s, he wrote his verse play The two Foscari in Ravenna, in less than a month of summer 1821. In Byron’s tragedy, the Doge Francesco Foscari is devastated at having to maintain Venetian law even as it sentences his son Jacopo to exile. The fact that the historical figure of Jacopo was a scoundrel and his verdict of exile an act of leniency and favour to his father finds no mention in the play.

2° From The two Foscari to I due Foscari

‘Beautiful drama, beautiful, archibelissimo!’ was Verdi’s excited response to his librettist Francesco Maria Piave work on The two Foscari’s adaptation. For his sixth opera, Verdi chose to set Byron’s melancholy drama to music, beautifully encapsulating its glum tone and intimations of Venetian secrecy and strictness. For the first time, Verdi would develop individual themes for each character, revealing their inner turmoil and foreshadowing future intimate works such as Luisa Miller or La traviata.

If Verdi was initially smitten by the topic, only four years after its premiere in November 1844, he would decree it a ‘funeral… too uniform an atmosphere and colour from beginning to end’. Later still, in a letter to Re Lear’s librettist Antonio Somma, he wrote ‘I should refuse to write on such subjects as Nabucco, Foscari, etc. They offer extremely dramatic situations, but they lack variety.’ Despite this literal monotone, the opera contains glorious music; with the Doge’s role being a dramatic tour de force, while Jacopo’s is often considered the most lyrical Verdi ever composed.

Although the opera is named after a father and son, it can be argued that the relationship between the Doge and his daughter-in-law is the more decisive one. After their confrontation in front of the Council, they meet again in the Doge’s private chambers in act 1, scene 4. Finally alone, the Doge can unleash his true feelings: his old father’s heart weeps, as his eyes have no more tears to cry. When Lucrezia enters in a rage and Francesco, calling her ‘daughter’, tries to reason with her. His tears nonetheless offer a ray of hope to despondent Lucrezia. The scene is characterised by a variety of solos, asides and interjections, which - without compromising the musical unity - were to become the trademark Verdi format.

Psychologically, too, this scene is of interest. In its dreamlike fantasy, it could be said that each character on the opera stage embodies a different aspect of ourselves. One submissive voice could thus sound old and tired, while another active one could scream stridently. As the author William Berger suggests, these father-daughter dialectics represent the divided self in conflict.

‘If Verdi has chosen such a bleak, dark colour’, explains the production’s conductor Paolo Arrivabeni, ‘he has evidently done it with the intention of following the spirit of the subject. Every time I conduct this opera I feel how the dark colours are meant to evoke a setting, in some ways in some moments you can also feel the taste of the sea, as Verdi will then do with Simon Boccanegra. The conductor's task is precisely that of underlining that particular colour which it is no coincidence that Verdi wanted to maintain throughout the opera.

For example, Jacopo's solo scene in prison: at the beginning, there is an instrumental introduction of solo viola and cello - and the fact that Verdi writes ‘soli’ is not by chance, it is almost onomatopoeic as if he already wanted to emphasize the solitude in which Jacopo finds himself. The sense of sadness and desolation that this introduction conveys is already brilliant in itself. Here Verdi is truly futuristic, he has a twentieth-century composer's style. Faced with a situation of this kind it is simply necessary to go along with what Verdi wanted to suggest’.

5° A theatre in which lies are banned

‘When I started studying I due Foscari’, says the stage director Leo Muscato, ‘it created a discrepancy between music and history in my mind: on the one hand, there was a story set in mid-fifteenth century Renaissance Venice, with men wearing tunics as long as their feet; on the other a piece of strongly nineteenth-century music, with closed forms, heroic cabalettas and leitmotifs that characterize the characters. It almost instinctively occurred to me that if we had set this story in an era closer to Verdi, I would never have heard that discrepancy again.

So the aesthetic character of the scenes and costumes aims to return an abstraction. The visual is brought to the essence. To suggest different environments we use a single scenographic system that allows many and evident changes of image. Without ever stopping the action, you will move from one painting to another, without interruption, giving the action a very tight rhythm. And all this to feed an idea of theatre that I have always pursued: a theatre that puts the spectator in a position to imagine what is not there; a theatre in which lies are banned and fiction becomes the only means left to be able to shout out truths that someone can listen to’.