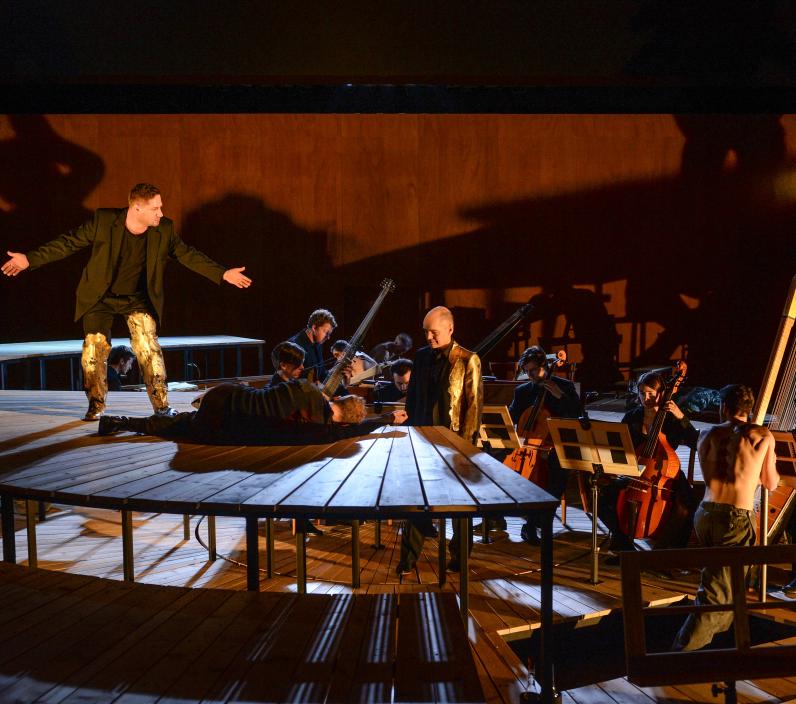 Monteverdi
This performance is no longer viewable as video-on-demand for rights reasons but other material about the production is still available.

Beset by suitors, Ulysses’s wife Penelope anxiously awaits her husband's homecoming. When he returns unrecognised, Penelope invites everyone to an archery contest with her hand as the first prize.

Monteverdi’s Il ritorno d’Ulisse in patria is one of the first modern operas ever composed. In his playful staging of the Homeric homecomer’s story, director Markus Bothe puts the accent on ‘modern’, quoting sundry theatre traditions from puppet and street theatre to Commedia dell'arte and placing the musicians centre stage.

Learn more about Nationaltheater Mannheim's production of Il ritorno d'Ullisse in patria in the company of director Markus Bothe and conductor Jörg Halubek.

The allegory of Human Frailty (“L’Humana fragilità”) laments its fate: it is the powerless plaything of conflicting currents. Time (“Tempo”) gnaws on it, Fortune (“Fortuna”) tosses it about, and Love (“Amore”) is its tyrant. All three allegories confirm their unlimited power over mankind.

Ithaca in the years following the Trojan War

Penelope waits for Odysseus to return. It is twenty years after the end of the Trojan War and he has still not returned to Ithaca. A group of noble princes have weaselled their way into her court—Antinoo, Anfinomo Pisandro, Eurimaco and their companion Iro. They contest for Penelope’s hand while squandering Ulysses’ estate.

While Penelope’s maid Melanto sings of love’s joy with her lover, Eurimaco, Ulysses is brought to the shore unnoticed. The Phaeacians have guided him back to his homeland against the will of the god Neptune. At the behest of Jupiter, the god of the sea may only sink the ship of the Phaeacians in wrath if he also agrees to allow Ulysses to return home. The goddess Minerva has been on the side of Ulysses for a long time. After she first encounters him in the robes of a shepherd boy, she transforms him into an old beggar. For his own safety, he should initially go unrecognised. In this new form, Ulysses encounters the shepherd Eumete, who is happy to take him in.

In order to gather information about his father’s prolonged absence, Ulysses’ son Telemachus travelled to Sparta. Minerva goes there to retrieve him. Eumete takes it on himself to notify Penelope about the return of her son. Ulysses allows himself to be recognised by Telemachus.

Meanwhile, the suitors put on a rambunctious feast and pressure Penelope to marry one of them, which she declines. As the suitors hear of the return of Telemachus, they initially decide to kill him, but then try one more time to win over Penelope with gifts. Ulysses appears in the palace under the guise of a beggar. As the suitors mock him, he challenges Iro to a duel, which he wins to the surprise of the spectators. After the gods strengthen their resolve to bring Ulysses’ ill-fated journey to a happy end, Minerva gives Penelope the idea to challenge the suitors to an archery contest: Whoever can string Ulysses’ mighty bow may take her as a wife and become king in Ithaca. While the suitors, one after the other, fail, the beggar strings the bow. Ulysses kills Antinoo, Anfinomo, Pisandro, and Eurimaco.

Even after the slaughter of the suitors, Penelope still needs to be convinced that Ulysses really has returned. The queen does not believe Eumete, her own son Telemachus, or even Melanto, who recognized Ulysses by his boar-hunting scar. Only after Ulysses can describe their shared bedchamber in detail, does she finally recognise him.

CORDULA DEMATTIO: Claudio Monteverdi is considered to be the ‘inventor of opera’: the 1607 Orfeo marks the beginning of the genre of opera as we know it today. What is so revolutionary about this art form?

JÖRG HALUBEK: The fact that here suddenly a voice sings as a soloist so that we can perceive it as a character who experiences emotions and expresses them, too! The music of the 16th century was strongly influenced by counterpoint. In Venetian choral music, for example, sixteen or more voices were intertwined and led against each other according to all rules of art. In monody, solo singing, what remains of this - to put it simply - is the uppermost and the lowest: a singer accompanied by one or more instruments. They play the bass voice and improvise over it. That's a bit like a modern jazz band improvising over a bass pattern.

MARKUS BOTHE: The ‘invention of opera’ is at the same time a kind of revival of antiquity, entirely in the spirit of the Renaissance. People reflected about how the ancient tragedies were performed and how they could be given new life. In this context, opera is a kind of archaeological misunderstanding.

CD: With Homer, Ulysses is the great, God-fearing ‘endurer’. Other authors see this much more ambiguously. What kind of character is this Ulysses?

MB: He is also a very ambivalent character in our interpretation. But I see him above all as a ‘warrior’ who can’t shake off his own war experiences and can’t cope with his traumas. He's been away from home for twenty years - for twenty years he hasn't felt any human emotion. And he doesn't escape it: when he murders the suitors, it's almost like running amok. He has killed for too long, his human feelings have been buried and suddenly he is supposed to be a husband and father again. There is a great desperation in that. Even the final duet with Penelope leaves a bitter aftertaste. You can't imagine that the whole thing will end well.

CD: In the costumes, it also becomes clear what kind of worlds collide here when Ulysses returns to Ithaca.

MB: Ulysses is a contemporary figure. And yet, I'm not interested in locating the event clearly, but rather in showing the mental and physical wounding of this character. He remains a foreign body in the world of the suitors - and also of Penelope. Their costumes quote the baroque era. But here, too, the costumes are an expression of an attitude, a sign of decadence among the suitors; in Penelope's case, a sign that she has closed herself off from the world.

CD: In what kind of world does all this take place? We are dealing with a very special stage space.

MB: The idea was to portray a whole world, a whole cosmos, which at the beginning stands still; just as Penelope stands still. Little by little this cosmos is then set in motion, first by the Phaeaks, later by the gods. Our stage takes inspiration from Shakespeare, but also from the ancient Greek theatre. It consists of two circles that can be turned against each other. This world system is not only home to our protagonists, but also to the musicians, who for me are also a kind of god. They provide the sound of the spheres. As in the medieval mystery play, the spectators are very close to the action: We don't operate the usual peep show, the stage extends into the auditorium. And in the prologue we find ourselves in a completely different situation: it takes place in the foyer and brings the audience into the theatre in a completely different way than we are used to.

JH: From the beginning, we were looking for a concept in which we musicians are very close to the singers. Because unlike in opera, I don't primarily conduct here: I conduct the orchestra from the harpsichord and we make music and improvise together with the singers. Monteverdi's music lives from great freedom, the creative scope is enormous, everything depends on the expression, on the content of the words and the scene. For this to work, you have to feel the other person and find a common breath.

CD: You speak of improvisation. What exactly does the score provide, what does she it leave to the performer?

JH: The score has been handed down in a 17th-century manuscript, which provides no information about the instrumentation. There are five-part instrumental movements in the symphonies and interludes. The rest consists of the respective vocal line and a bass line below it. The instruments of the so-called continuo group transpose this bass voice. The cello, for example, plays the bass line itself, while the lirone - basically a cello, but with up to 24 sides - the harpsichords and lutes set the chords above it. In this way, two staves become a polyphonic fabric. How exactly it is composed is left to the musician, who of course has to listen very carefully to what happens in the singing voice.

CD: Do you know what kind of instruments Monteverdi had at his disposal?

JH: Pieces like the Orfeo and the Vespro della Beata Vergine are preserved in printed scores. There you can read what instruments Monteverdi had in mind. And even though the orchestra in Venice was probably much smaller, we decided very early on to expand the instrumentation in order to have as many different colours available as possible. For me, historical performance practice means dealing with the material in the spirit of the times. We will also use a baroque harp, an organ, recorders and cornetts in our version. These cornetts look a bit like curved flutes, but have a trumpet mouthpiece and bring a particularly brilliant nuance to the sound.

JH: The final instrumentation was really only created during the rehearsals themselves. Also the way of dealing with connections, tempi and rhythms, for example. Should the singer start first? Or does a chord come first? How long are the rests? That is a dynamic process.

MB: I think it's great how Monteverdi lets people collide in Ulysses’ homecoming, and how he draws them musically. This music is inspired by great humanity. With his work, Monteverdi opens up a touching approach to themes such as war, love, death and transience. We would like to fathom this.