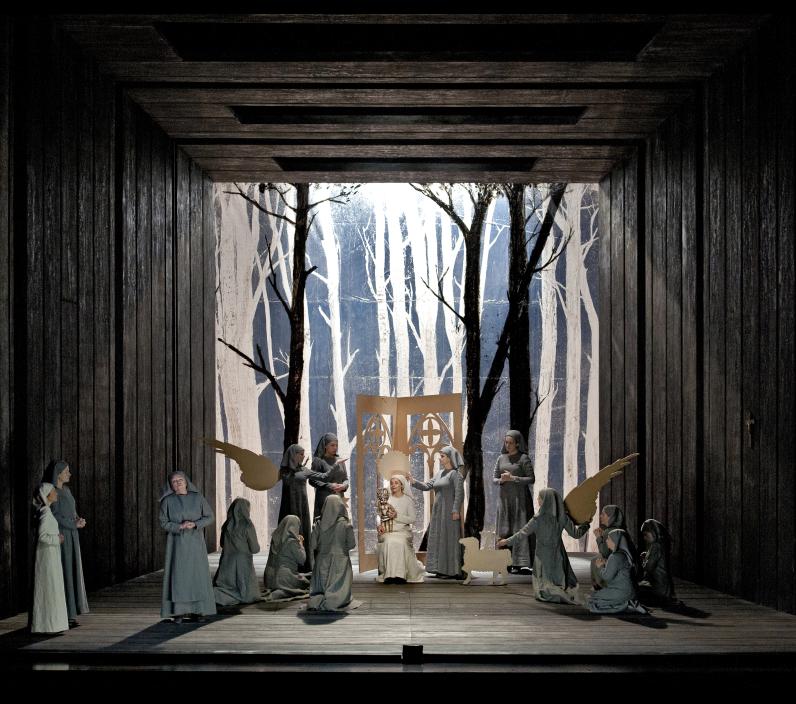 Poulenc
This performance is no longer viewable as video-on-demand for rights reasons but other material about the production is still available.

The Carmelite nuns, led by first Mother Marie and then Madame Lidoine pray the Ave Maria together, in Francis Poulenc's Dialogues of the Carmelites.

During Revolutionary times, the young and timid Blanche, daughter of the Marquis de la Force, resolves to take the veil without notice. Before she enters the convent of the Compiegne Carmelites, the Prioress tries to unveil her real reasons, reminding her that the convent cannot be a place of hiding, but should be protected by its members. Blanche’s resolve survives and the Prioress gives her blessing.

As she arrives, Blanche meets the young Sister Constance, a joyful and fun-loving girl, who predicts they will both die at young age, and on the same day. Shortly after, the Prioress dies in an anguishing agony that chocks Blanche profoundly. As she blesses her new pupil, the Prioress consigns Blanche to Mother Marie’s care.

The new Prioress warns the convent against upcoming adversity, encouraging them to stay strong and humble. Meanwhile, Blanche’s brother, the Chevalier de la Force, arrives, begging his sister to flee the danger of the Terror with him. Blanche restates her desire to stay, and die if need be.

While the Father Confessor announces he’s been forced into hiding, the Prioress warns the sisters against pride and the temptation of martyrdom, arguing only God can decide their fate. Timely words as an angry crowd enters the convent to expulse the nuns.

In the absence of the Prioress, Mother Marie proposes that the nuns take a vow of martyrdom, and submits this proposition to a secret vote. Blanche’s dissent renders the vote invalid, but Constance claims that it was actually she that voted against the vow, and that she is now reconsidering. Terrified, Blanche flees.

Mother Marie finds Blanche in her former house, traumatized by the death of her father. She declares that Blanche may have saved her life but not her soul. Shortly after, Blanche hears the Carmelites have been arrested.

Condemned to death, the sisters walk to the scaffold, carried by the sound of a beautiful Salve Regina. Suddenly, Blanche rises from the crowd, peaceful at last, to join Constance in this last ordeal.

“What does a Christian life mean in a world without religion? The task of our generation will not be to desire “grand things” once more, but to save our soul from chaos, to keep her and see in her the only possession we’ll save from the flaming house, as our “loot”. God lets us know we have to live as men who can live without God. The God who is with us is the one that abandons us.” - Dietrich Bonhoeffer

The story of the Compiègne Carmelite’s martyrdom goes back to the time of the French Revolution and was told by Mother Marie de l’Incarnation de Dieu who survived the Terror. In the 1930s, this historical fact was adapted as a novel by the German Gertrud von Le Fort, who introduced the fictional character of Blanche de La Force, whose name is obviously inspired by her own. By the end of the 1940s, the resistance fighter Father Brückberger decided to create a movie adaptation of the Le Fort novel and asked the French writer Georges Bernanos to write the script of the Dialogues des Carmélites. Suffering from cancer, the author focuses his story on the faith crisis experienced by the dying priestess, death and his own religious obsessions. His script, considered inappropriate to cinema, was finally rejected; but it resurfaced as a theatrical play at the beginning of the 1950s. It is this version the editor Ricordi suggested as libretto to Poulenc who seizes the occasion enthusiastically.

Poulenc composed his opera between 1953 and 1956, based on a faithful adaptation of Bernanos’ play. Unlike many of his contemporaries, Poulenc stays deeply attached to tonal music and dedicates his score to the great composers of past centuries: Mussorgsky, Monteverdi, Debussy, Verdi. Poulenc draws from all those influences to create a unique, easily recognizable, style combining harmonic experiences, hints of modality, precision and an epic spirit carried away by an eccentric and sublime orchestration.

This opera contains few arias and is constructed on a continuous recitative, the opera adapts to the abundant text examining the questions of death and God’s absence. Bernanos’s Christianism, after the trauma of World War II, is one of withdrawal and death of God: “to be a believer today is to face up to God’s silence” says Py. It is the absence of all heroic, ideal life, crushed by the powerful death, ruin and silence that Blanche has to accept still while Constance opens up to it.

Olivier, a practicing Catholic, offers a very intimate and sober staging, firmly committing to the idea of reclusion. The splendid sets remind us of the concrete convent of la Tourette about which le Corbusier declared: “This convent of rough concrete is a work of love. It does not talk. It is from the inside that it is lived. It’s on the inside that the most important takes place.” The grey and white sets open and close, creating new spaces with a poetic efficiency. They alternate images of gripping aesthetic. Full of Christian references, from crosses to the mystical scenes enacted by the nuns, Py’s staging manages to put Bernanos’ philosophy in the centre without ever preaching the audience.

Laurent de Sutter: I wanted to ask, do you make any distinction between opera and theatre, and how? Is there a difference?

Olivier Py: Well, there’s the singing. I myself only like sung theatre… So for me, an actor is a singer. If an actor doesn’t sing, he’s an actor for the cinema or television. Besides, what some actors are criticized for is precisely singing. I have always looked for lyrical actors, who sang the text; and who in that singing reinterpreted the representation of the human. The average person represented on television has problems: he cannot pay his rent, he’s about to get divorced, etc. Those are the problems of what I call the bourgeoisie.

The tragic actor doesn’t have problems; everything is already dead. The bourgeois are the ones having problems. When I work with prisoners, they don’t have the same “problems”: it’s survival, the survival of their dignity. That’s all there is, that’s all they talk about: are we still men, or are we numbers? How do I save my dignity? And it sometimes comes down to a wet cigarette or a hat one refuses to remove.

I think that in that place, precisely in the aftermath of Auschwitz, one cannot content oneself with representing humans who have problems, even interesting problems. It has to be singing. It’s the singing that makes me love opera. What I just said may sound like a tautology, but there are lots of operas where one doesn’t sing. There are singers who don’t sing...

It’s about discovering one’s own humanity... This, in my opinion, artists in general, those who do it best –who are maybe the only ones to do it – are the singers. They’re the only people I admire in the world, the singers. The singers and the saints. What I’ve wanted to be all my life is a singer… or a saint. But a saint I knew I wouldn’t be able to become. A singer, too, I found out quite quickly I wouldn’t be able to be a singer either; too much work.

You can listen to the full interview here.