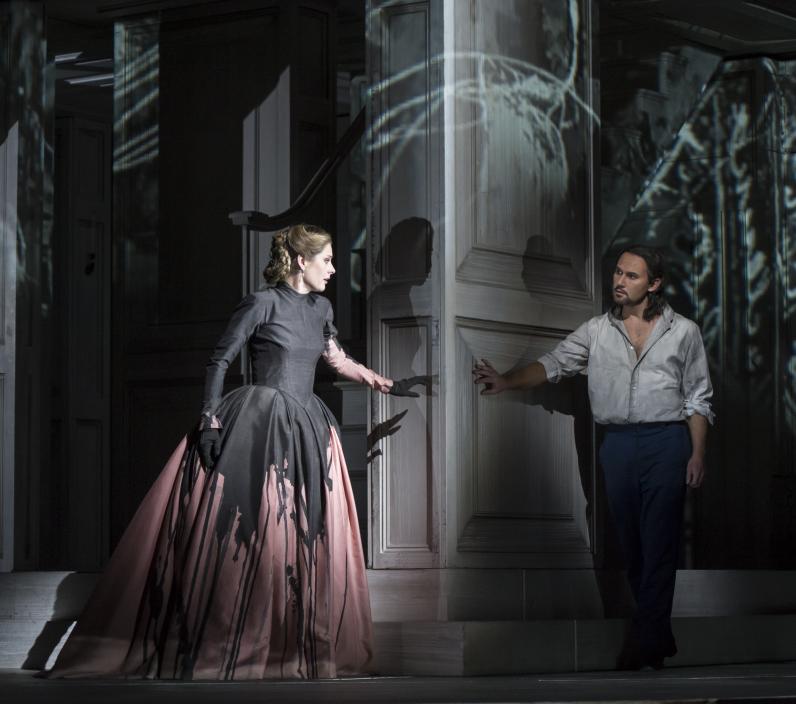 Mozart
This performance is no longer viewable as video-on-demand for rights reasons but other material about the production is still available.
Sung in
Italian

Mozart's most famous womaniser will seduce you in this acclaimed production by Kasper Holten.

This aria is one of the shortest of Mozart's operas, lasting just two minutes but it is key to understanding his character, namely; his taste for the festivities, his desire to seduce and his inexhaustible energy.

In this final scene from The Royal Opera House’s Don Giovanni, Leporello (Ildebrando D'Arcangelo) and the Commendatore try to persuade the Don to repent for his sins or else spend eternity in hell.

The making of a Don Giovanni costume (I)

Don Giovanni, a Spanish nobleman, is renowned throughout Europe as a seducer of women; Leporello, his servant, reluctantly aids him by keeping watch. Giovanni attempts to leave the house of Donna Anna, his most recent conquest; he kills Anna’s father the Commendatore when the Commendatore tries to stop him. Anna tells her fiancé, Don Ottavio, that she was raped by an unknown man and they vow revenge on the murderer.

Leporello’s attempts to persuade his master to reform are interrupted by Donna Elvira, a former mistress of Giovanni’s, who is travelling to look for him. Giovanni leaves it to Leporello to explain the extent of his master’s womanizing.

Leporello discusses with Giovanni the plans for the masque ball his master is hosting that evening. Zerlina assures Masetto that Giovanni has not touched her. Elvira joins forces with Ottavio and Anna; they are going to the ball and intend to exact vengeance on Giovanni. While everyone is dancing at the ball Giovanni attempts to ensnare Zerlina, but she rallies all behind her to try to entrap Giovanni. All accuse him, but he and Leporello elude them once more.

Hoping for success with Elvira’s maid, Giovanni exchanges clothes with Leporello, who is instructed to lure Elvira away. Giovanni is interrupted by Masetto, who is intent on killing him, but his disguise is successful and he beats Masetto up and escapes.

Returning with Elvira, Leporello is mistaken for Giovanni by Anna, Ottavio, Zerlina and Masetto. Removing his disguise, Leporello convinces them that he is not the guilty one. Ottavio swears vengeance on Giovanni whom, in spite of everything, Elvira continues to love.

5 things to know about Don Giovanni

1° The origins of Don Juan

The character of Don Juan can be found in several literary, musical, pictorial and cinematographic forms. This legendary character first appeared in the 17th century, in a play by Tirso de Molina titled L'abuseur de Séville et le Convive de pierre. Don Juan is a great seducer, obsessed with the pleasures of life and with no cares for others. He rejects social order and Christian morality. He embodies the libertine.

In 1665, Molière wrote his play Dom Juan or The Feast of Stone and Mozart composed his opera Don Giovanni in 1787 with a libretto by Lorenzo Da Ponte. Many writers and musicians have also treated this myth: Charles Baudelaire in Les Fleurs du mal, Tchaikovsky in Don Juan’s serenade. Christoph Willibald Glück composed a ballet-pantomime in 1761 and Richard Strauss a symphonic poem in 1889.

2° An opera that mixes genres

Don Giovanni was commissioned from Mozart after the success of The Marriage of Figaro at the National Theatre in Prague. Mozart is said to have composed the overture to Don Giovanni the day before the premiere in a matter of hours. To keep Wolfgang awake during this task, his wife Constance apparently told him stories while he drank punch. He then fell asleep for a few hours and his wife woke him up at dawn so that he could to finish composing.

Mozart called this opera 'drama giocoso', which literally means drama with jokes. The opera is indeed difficult to classify as it mixes genres. There is clearly a contrast between the dramatic personification of Don Giovanni and the comic character of his valet Leporello. These two are a meeting of shadow and light, violence and serenity.

The only baritone in this opera, Don Giovanni changes his dramatic style to adapt to the woman he wants to conquer: he addresses Zerlina, a country girl, in a pastiche of Neapolitan romance - he goes into a more serious noble register to seduce Donna Elvira ('Ah taci, ingiusto core').

3° Some famous arias: 'The return of the Commandatore' and the 'Champagne aria'

In the final scene, the Commandatore returns from the dead, invited by Don Giovanni, his murderer and the author of an attempted rape on his daughter. The public attends a surprising mass of the dead, a rise in power followed by a brutal silence. Don Giovanni was written in the year that Mozart’s father, Leopold, died. The latter was also his first teacher. In the film Amadeus, by Milos Forman, Antonio Salieri recognises in the character of the Commandatore a 'Leopold raised from the dead'.