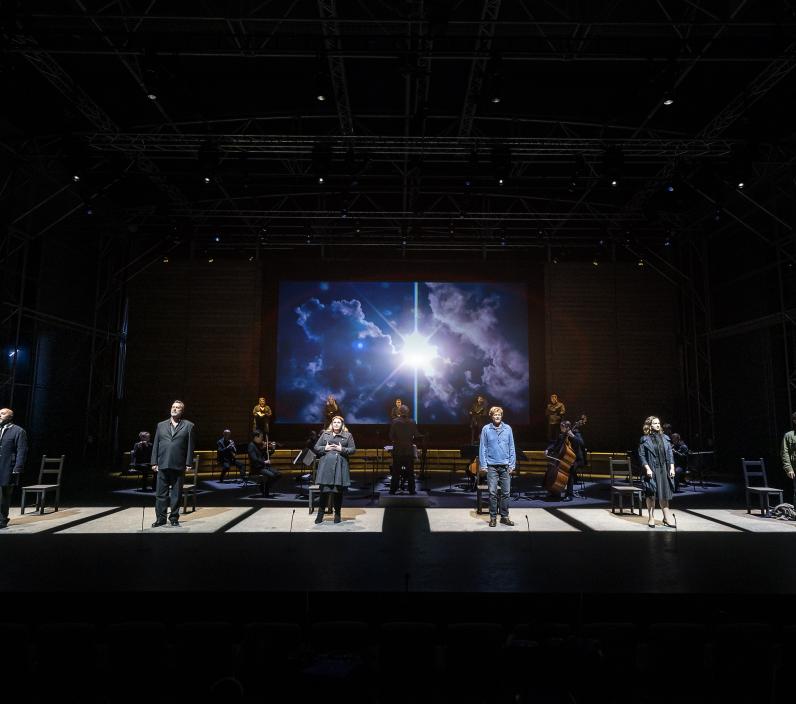 Beethoven
This performance is no longer viewable as video-on-demand for rights reasons but other material about the production is still available.

Suspecting her missing husband to be held as a political prisoner, a noblewoman disguises herself as a male prison guard. She discovers him weakened in the darkest dungeon, but will she be able to rescue him before it is too late?

The themes of oppression and isolation, but also of hope and the power of love, make Fidelio the perfect opera for our times. Garsington Opera’s outstanding cast, led by Katherine Broderick as Leonore and Toby Spence as Florestan, performs Peter Mumford's semi-staged concert of Beethoven's masterwork, complete with a beautifully filmed backdrop.

Leonore, disguised as a man named Fidelio, has secured a post at the prison where she suspects her husband, Florestan, is being illegally incarcerated. Marzelline, the daughter of chief gaoler Rocco, has fallen in love with Fidelio, much to the annoyance of fellow employee Jaquino.

Fidelio persuades Rocco to share supervision of the inmates. Upon overhearing plans to kill the prisoner in solitary confinement, Fidelio secures permission to assist in preparing the grave.

Deprived of light, air, nourishment and liberty, Florestan considers his hopeless situation, seeing a vision of Leonore leading him to freedom. Upon hearing his voice, Fidelio recognises her husband, reveals herself as Leonore and threatens the governor, Pizarro, with a gun. At that very moment, the Minister arrives and announces a pardon for all prisoners, allowing Leonore to finally release her beloved Florestan.

Fidelio to the rescue

Beethoven’s only opera Fidelio is considered the most famous example of the rescue opera. While the term was coined much later, the genre describes operas of the late 18th and early 19th century with lofty humanistic ideals revolving around the heroic rescue of a protagonist from mortal danger. In other words, it describes the plot of Fidelio itself.

Now, over 200 years after the premiere of its final version in Vienna, the opera once again lives up to its redeeming reputation. After over half a year of closed doors, Garsington Opera’s return to live performances with Fidelio was an inspired choice. Practically speaking, it salvaged its 2020 festival. Its symbolic impact, however, is much deeper.

With its life-affirming message of courage in the face of menace, the opera could not be timelier. At Garsington, the application of Covid-induced restrictions took on a poetry of its own. The stage director Peter Mumford reworked a minimalist concert staging first performed at the Paris Philharmonie in 2016. Video footage conjuring up a prison setting and recalling Piranesi or Goya are projected in black and white at the back of the stage. The images turn crimson as soon as Pizarro (Andrew Foster-WIlliams) threatens violence.

Mumford’s decision to omit spoken dialogue turns out to be unexpectedly felicitous. With the need to reduce performance time and resolve the challenges brought about by the lack of costumes and set, the dialogue is replaced with narrative titles as if in a silent movie. The device is as straightforward as it is effective, allowing the plot to advance smoothly and focus on the music. ‘It is famously challenging for a director to incorporate this spoken text without punctuating the flow of the piece,’ remarks Mumford in his director’s notes. ‘In other words, the drama in Fidelio is often expressed through the music rather than in the action.’

The music, performed by a reduced orchestra of 13 musicians under the baton of Garsington Opera’s artistic director Douglas Boyd, is indeed splendid. ‘Far from missing the lushness of a full string sound, we could hear every nuance of Beethoven’s ingenuity in constructing melodies, harmonies and rhythmic device. Each time a single note caused a particularly felicitous change in harmony, that note was clearly signposted to us, without orchestral clutter to hide it – a true revelation of the music.’ (David Karlin, Bachtrack)

The cast received similar praise. In his review of the performance for The Independent, Michael Church observes that in an overall strong cast, the soaring power of soprano Katherine Broderick cut through everything. Attesting unusual warmth to Stephen Richardson in the part of gaoler Rocco, he describes Toby Spence as Florestan as ‘the portrait of a soul in torment’.

Outwitting the sanitary restrictions that make choir pieces currently impossible to perform in the UK, the Prisoner’s Chorus was pre-recorded on Zoom with Garsington’s Digital Young Artists Programme and synced with the live orchestra and three chorus singers on the nights of the performance. Seeing the singers’ faces woven into the video of the prison did not miss its emotional impact.

All in all, Beethoven’s grandiose opera in its chamber music version is an astonishingly joyful revelation.