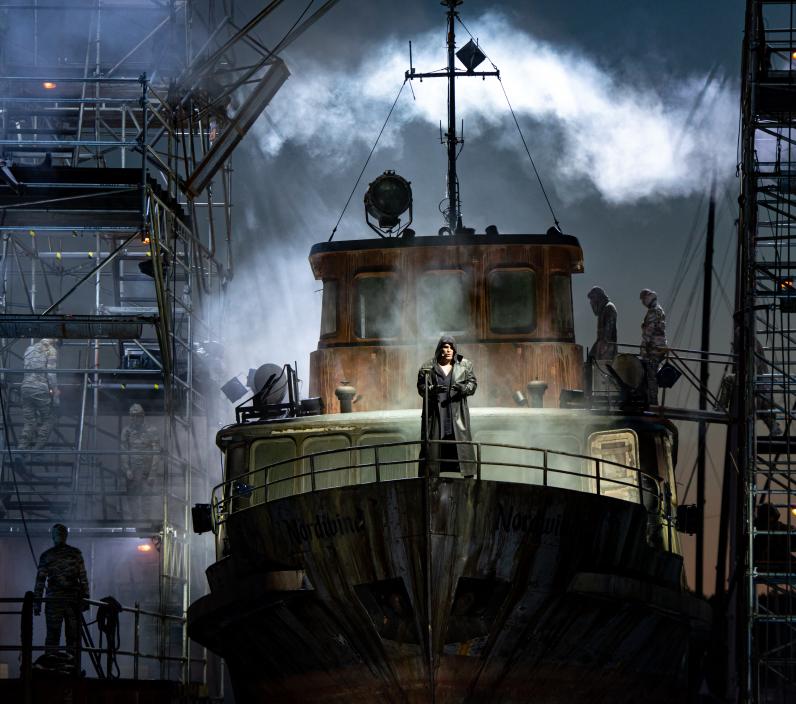 In Klaipeda State Music Theatre’s large-scale open-air production, Richard Wagner's opera is performed mere miles from where the first motifs of The Flying Dutchman were born in the stormy Baltic Sea. Among the colossal structures and hoists of a historic shipyard, the setting itself stirs the audience's imagination. Director Dalius Abaris’s bold vision is captured for the cameras in the light of a summer’s evening on the Lithuanian coast and benefits from the latest sound recording technology.

Standing on the colossal hoist of a historic shipyard, Sandra Janušaitė sings the famous Senta ballad from the Klaipeda State Music Theatre's spectacular production of Wagner's The Flying Dutchman. In the ballad, Senta tells the story of the Dutchman and vows to redeem a man she has never set eyes on.

Gediminas Šeduikis and Dalius Abaris joined forces to work as a directors’ duo for this unprecedented production of Richard Wagner’s The Flying Dutchman at the historic Paul Willy Lindenau Shipyard of Klaipeda. While walking through the shipyard and what is to become the performance stage, they share their insights into the concept of their pioneering work.

The legend of the Flying Dutchman

A raging storm has driven the homebound fishing boat aground in a cove. The Steersman tries to keep up his spirits with a song but falls asleep on the watch, together with the exhausted crew and the ship’s captain, Daland. As the storm grows stronger, a strange-looking vessel appears. Its pale-faced captain is the legendary Flying Dutchman who has been condemned to eternal wandering unimpeded by storms or pirates. He can find peace neither at sea, nor on land where he is permitted to go ashore once every seven years and search for true love, which is his only hope for salvation. The Dutchman asks captain Daland for shelter and offers his entire fortune in return for lodging. Tempted with the prospect of wealth, Daland gladly offers the hand of his daughter, Senta. A beam of hope shines in the Dutchman’s soul: is there a chance that he finds his lost homeland in Daland’s family and ultimate redemption through the love of faithful Senta? Meanwhile, sailors greet a tailwind and prepare their ships to set sail.

Waiting for the return of Daland’s ship, the girls are working in the berth and singing. Senta is oblivious of her surroundings, brooding on an old medallion with a picture of a pale-faced sailor. Senta’s friends tease her about the huntsman Erik, her ardent suitor. Senta, heedless of their facetious remarks, sings a ballad, which she came to love as a child. It is about the wandering sailor whose mysterious ship is condemned to stay at sea forever. Every seven years he comes ashore to seek a maiden who would love him enough to declare herself faithful to him for life. Were he to find one, his curse would end – but he never does so. Senta’s friends are moved by the doomed wanderer’s fate, while she is obsessed with the idea that she will be the one to save the Flying Dutchman from doom. Senta’s words surprise Erik, who is overtaken by a strange foreboding. He relates a dream, in which he saw Senta’s father return with a mysterious stranger resembling the one portrayed on the medallion. Senta is now convinced – he is her destiny. Erik leaves in despair. Daland unexpectedly arrives home with the Dutchman and relates Senta about their encounter and his companion’s lucrative proposal in exchange of her in marriage. But Senta barely notices her father, even when he introduces his guest as her betrothed. The Dutchman does not turn his eyes from Senta, hoping that her love and faithfulness will lift his curse. Daland leaves the two alone.

Sailors celebrate their safe return to land. They call out to the Dutchman’s ship, inviting the crew to join them, but the ship remains dark and silent. Daland’s sailors deride the mysterious crew and tease the girls by telling about the ghost ship and its captain. Suddenly, a storm rises and ferocious singing is heard from the ghost ship. Daland’s men try to muffle up their wailing with their merry song but finally retreat in fear.
Hearing about Senta’s betrothal, Erik tries to dissuade Senta from binding her life with the eerie stranger. Senta is unwilling to listen to him, for she has made an oath and is called by a supreme mission. Erik then reminds her of their happy days together and his love for her. The Dutchman, seeing Senta together with Erik, is stricken by a sense of loss, believing that Senta, too, has failed to render him undying faithfulness. He reveals his secret and sets off towards his ship to continue this endless roaming. Erik and Daland’s attempts to restrain Senta are futile: she follows the Dutchman, determined to save him from curse...

The myth of a phantom ship doomed to sail the oceans forever is likely to have originated from the golden age of the Dutch East India Company in the 17th century. The first print reference appeared in John MacDonald’s 1790 travelogue Travels in various parts of Europe, Asia and Africa during a series of thirty years and upward, in which sailors see the Flying Dutchman during a storm. Over the next half-century several stories inspired by the legend appeared in print, including ‘Vanderdecken’s Message Home’ and Samuel Taylor Coleridge’s 'The Rime of the Ancient Mariner'.

Heinrich Heine’s satirical novel Aus den Memoiren des Herrn von Schnabelewopski (‘The Memoirs of Mister von Schnabelewopski’) was the first to introduce the cursed captain setting foot on land every seven years with the chance to be saved through the devotion of a faithful wife. Heine presented this redemptive power of love as a means for ironic humour, but when Wagner wrote his libretto for The Flying Dutchman (Der fliegende Holländer) he took the theme literally and seriously.

After 160 years and countless adaptations, The Flying Dutchman finally returned to the shores of the stormy sea in which the idea for the opera first occurred to Wagner. In August 2020, the Klaipėda State Music Theatre staged their production of the opera in Lithuania: the project could not have been more ambitious and has been hailed as one of the country’s most celebrated cultural events of the year.

The performance took place in Klaipėda on the hundred-year-old shiplift of the Paul Willy Lindenau Shipyard, whose huge frame structures and hoists provided a spectacular setting for the opera. Staged in the open air, 1000 socially distanced spectators were able to attend the show, in a rare communal experience in a year of multiple lockdowns.

By setting the scene in a shipyard, the artistic team around Concept and Artistic Director Dalius Abaris faced the challenge of dealing with rain and strong gusts of wind. With the help of leading sound engineers and cutting edge audio technology, they succeeded in making both the orchestra and the singers sound as if it were staged in an acoustic concert hall. But the extreme weather conditions was not the only complicating factor of the production: the sound engineers also had to deal with the performers moving constantly across and even beyond a 50-metre stage. Abaris reflects: ‘This was a big challenge, not just for the sound team but also for the performers. When people are separated by over 40-metres distance, the monitoring systems visibility and relationship with the conductor all have to be watertight.’

Both a critical and an audience success, Klaipėda State Music Theatre’s production was nominated at the Lithuanian Theatre Awards ceremony on 27 March 2021, the most important performing arts awards in Lithuania. Out of five nominations in the categories for best director, best set design and best soloist two Golden Crosses of the Stage went to the creative team of The Flying Dutchman: Dalius Abaris was announced Best Director and Tadas Girininkas Best Soloist. 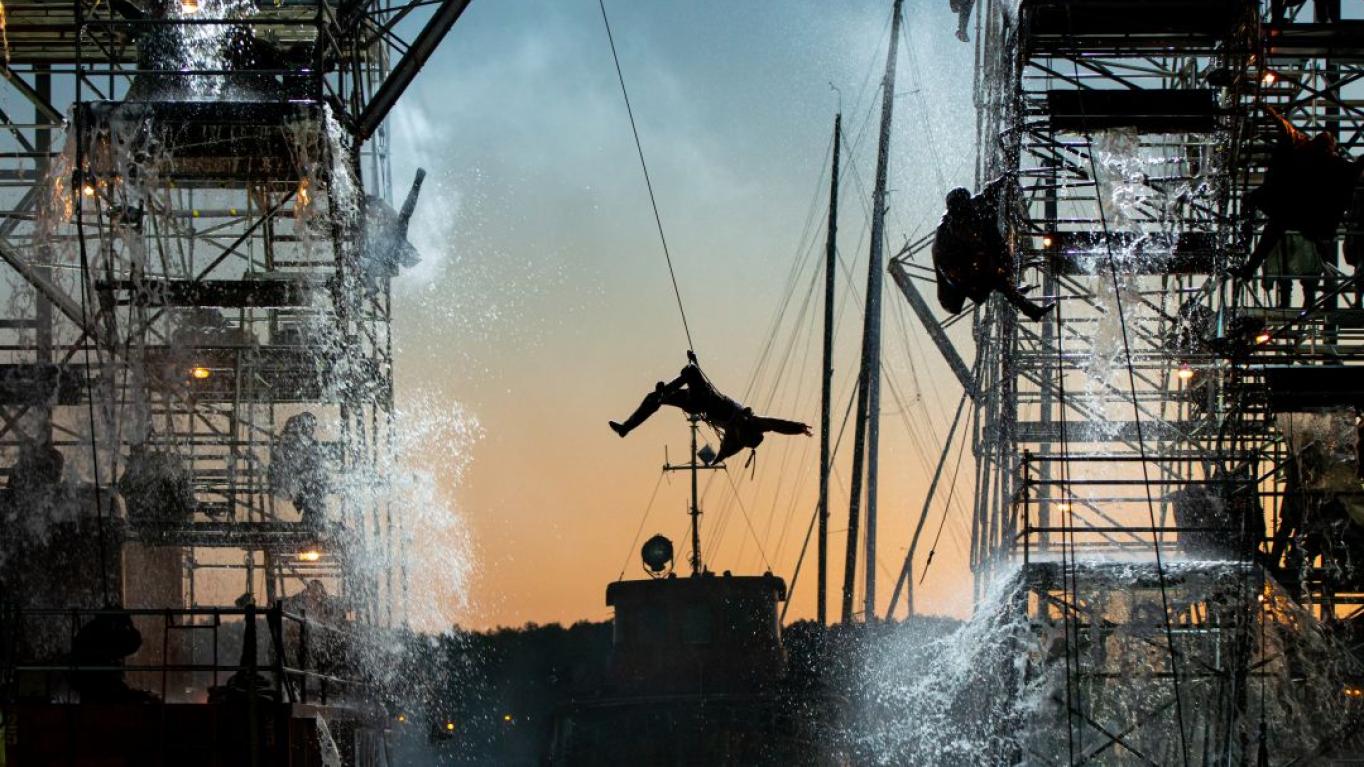 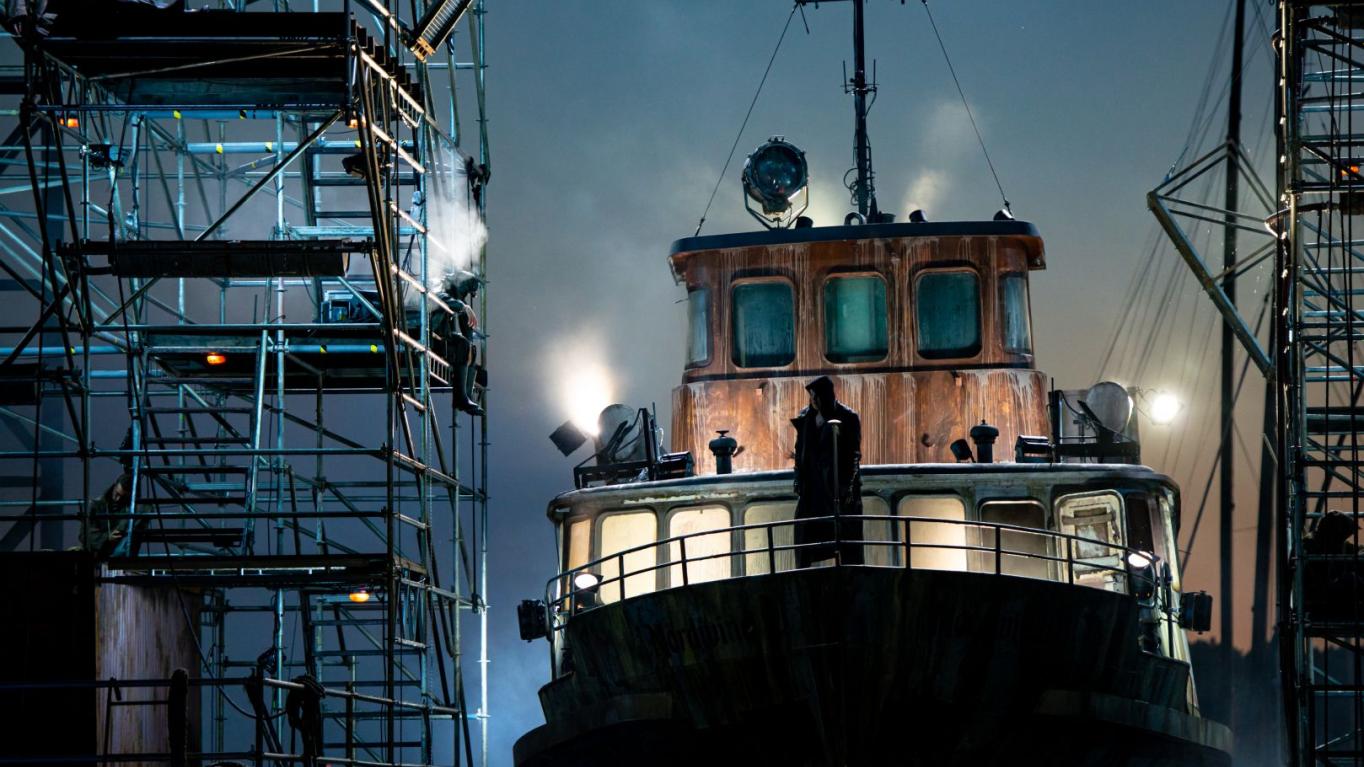 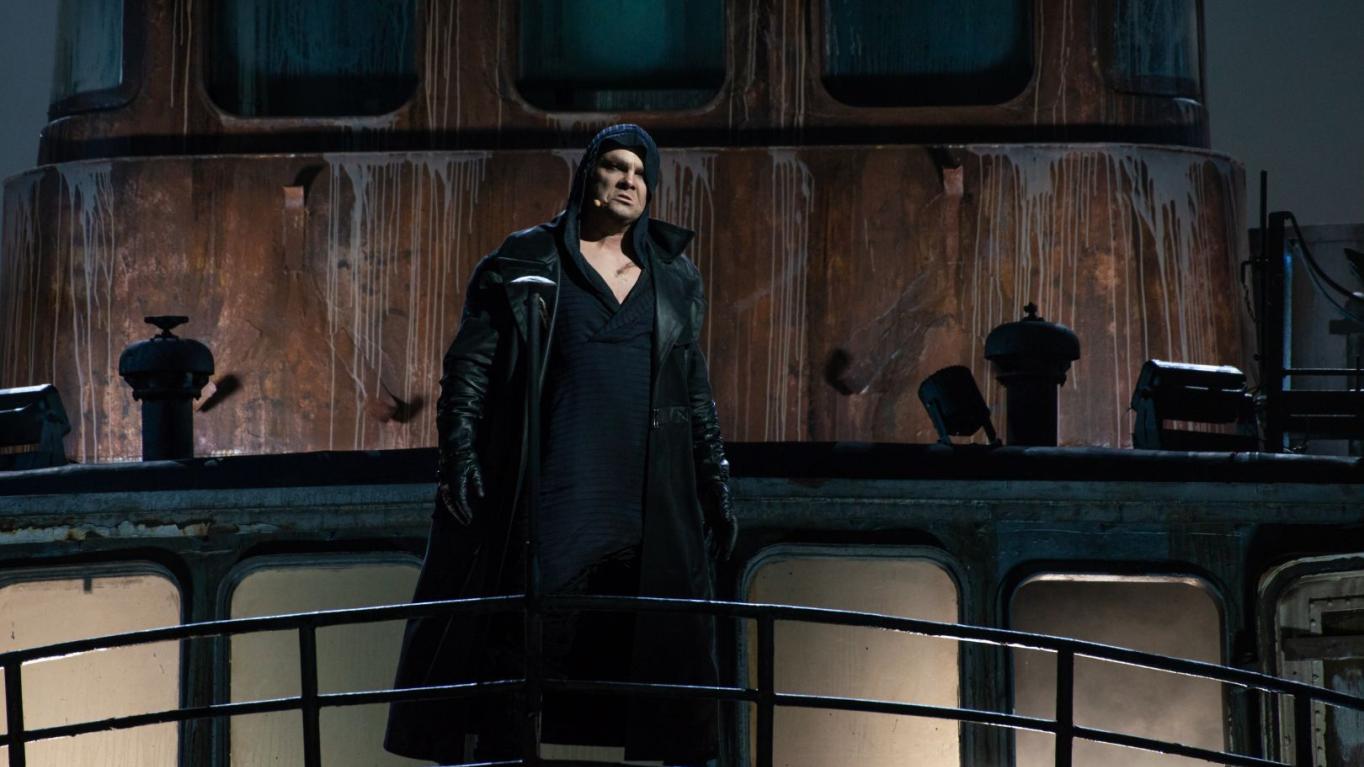 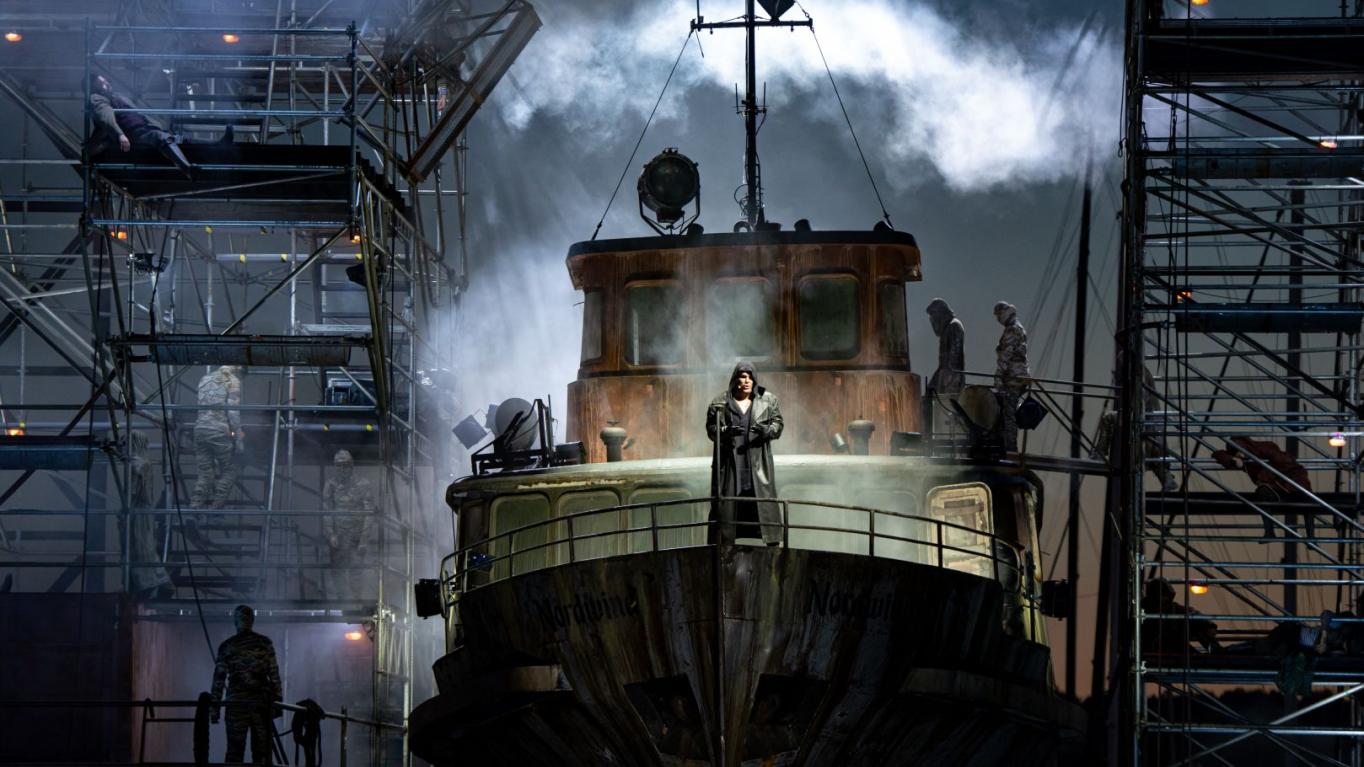 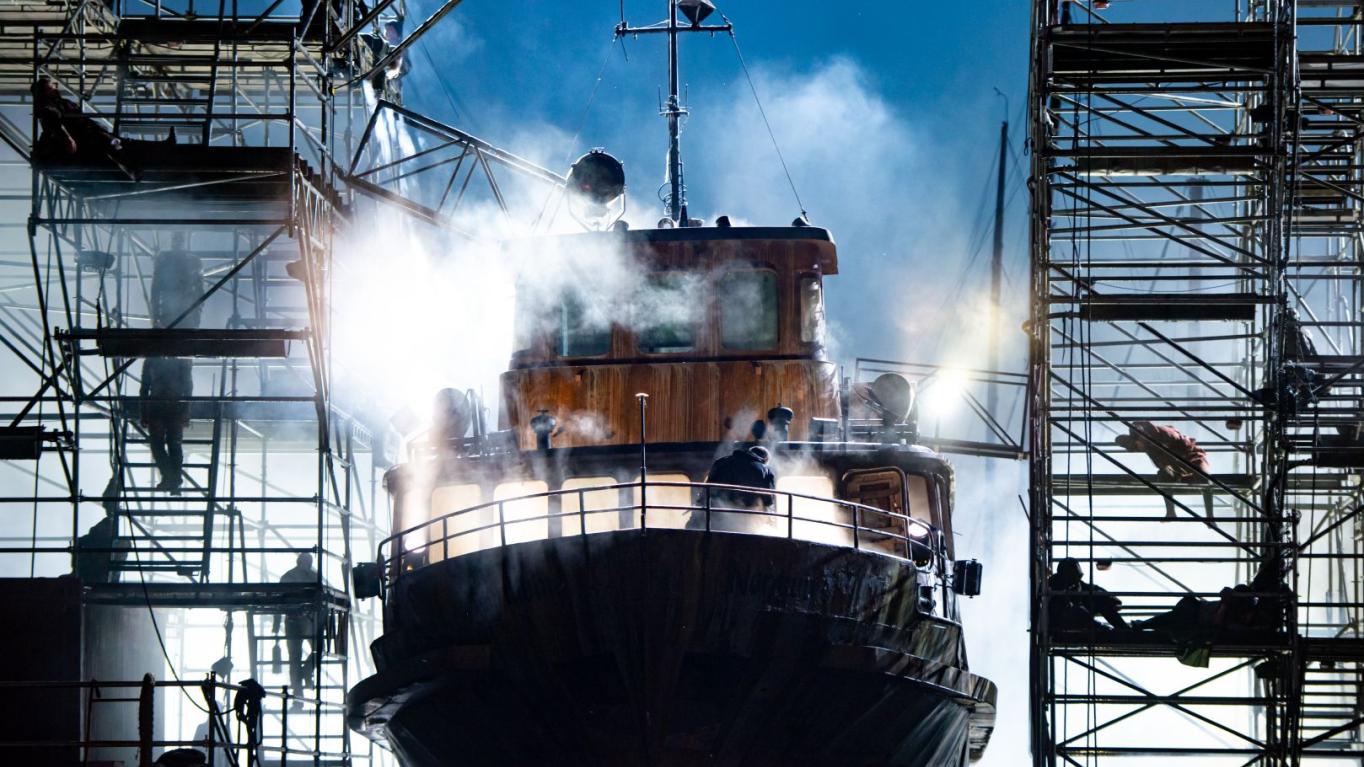 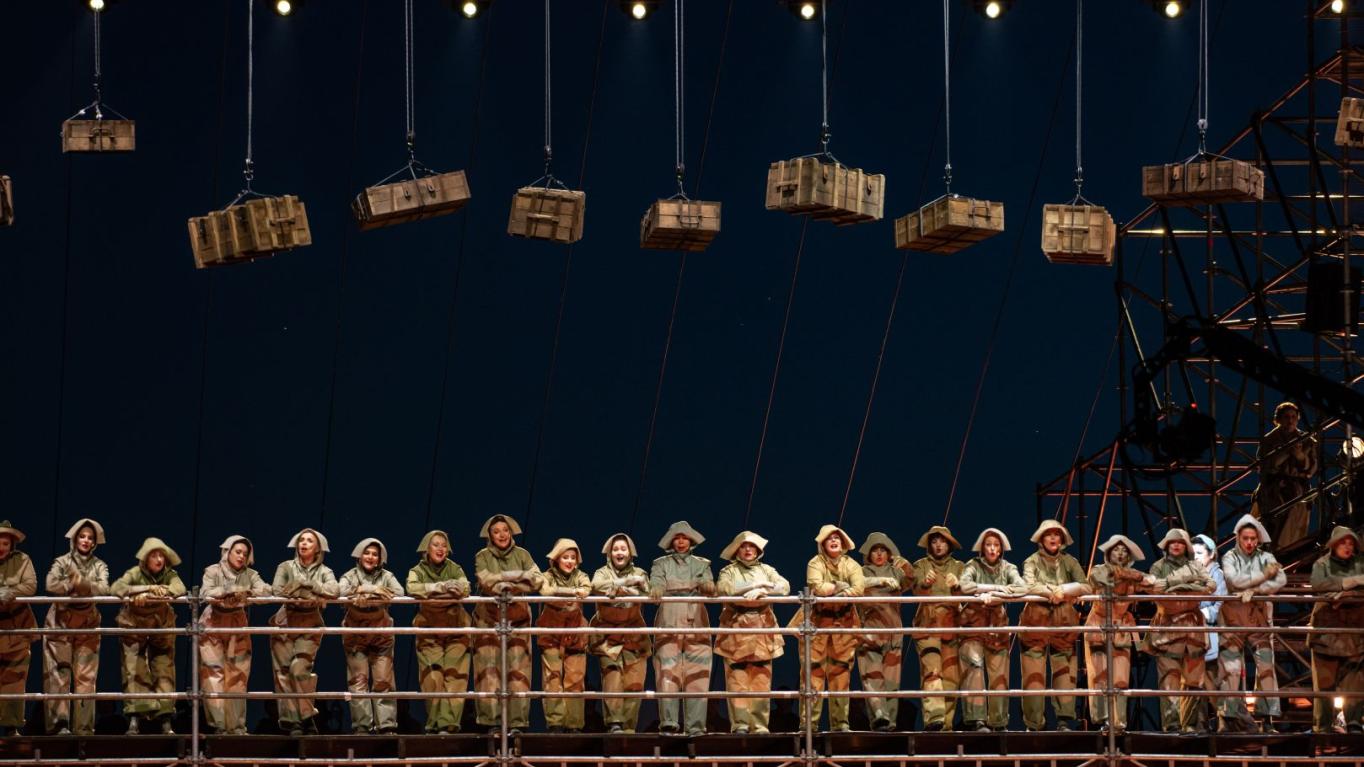 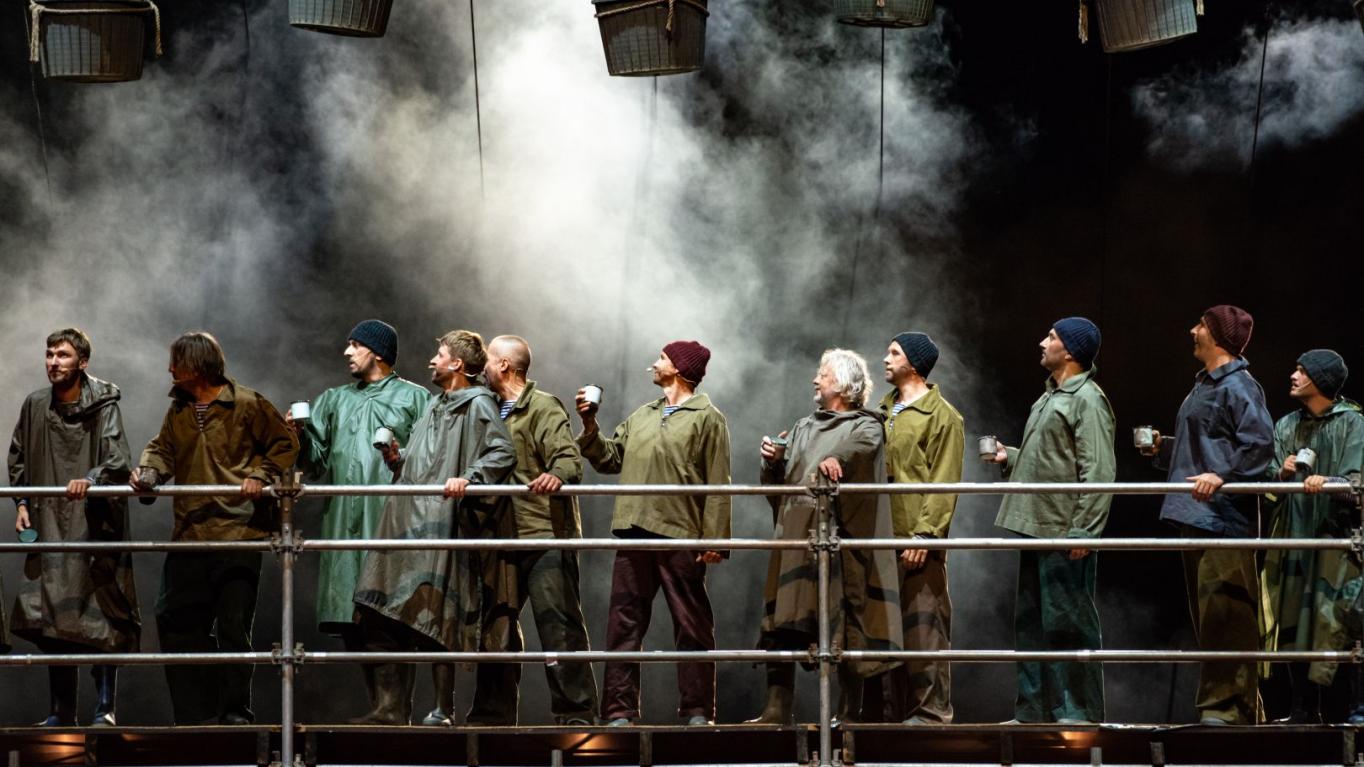 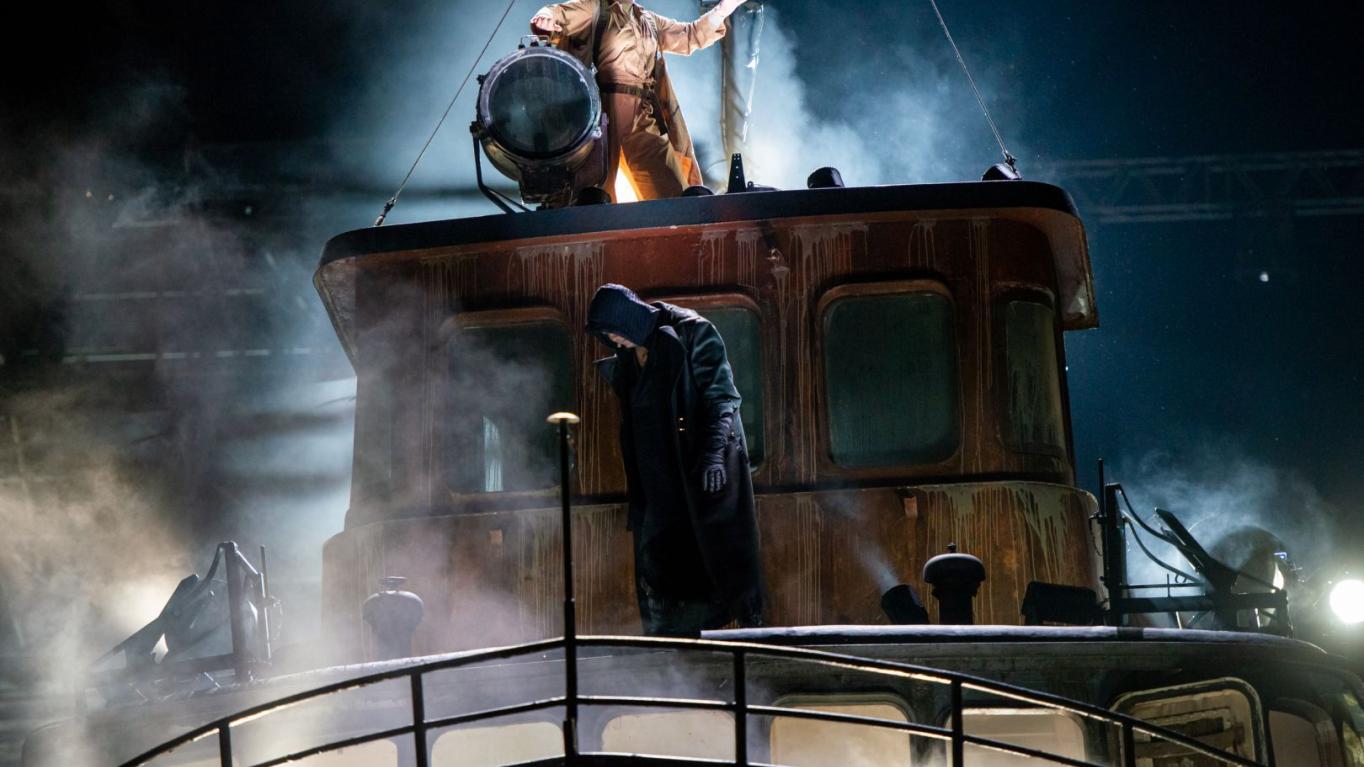 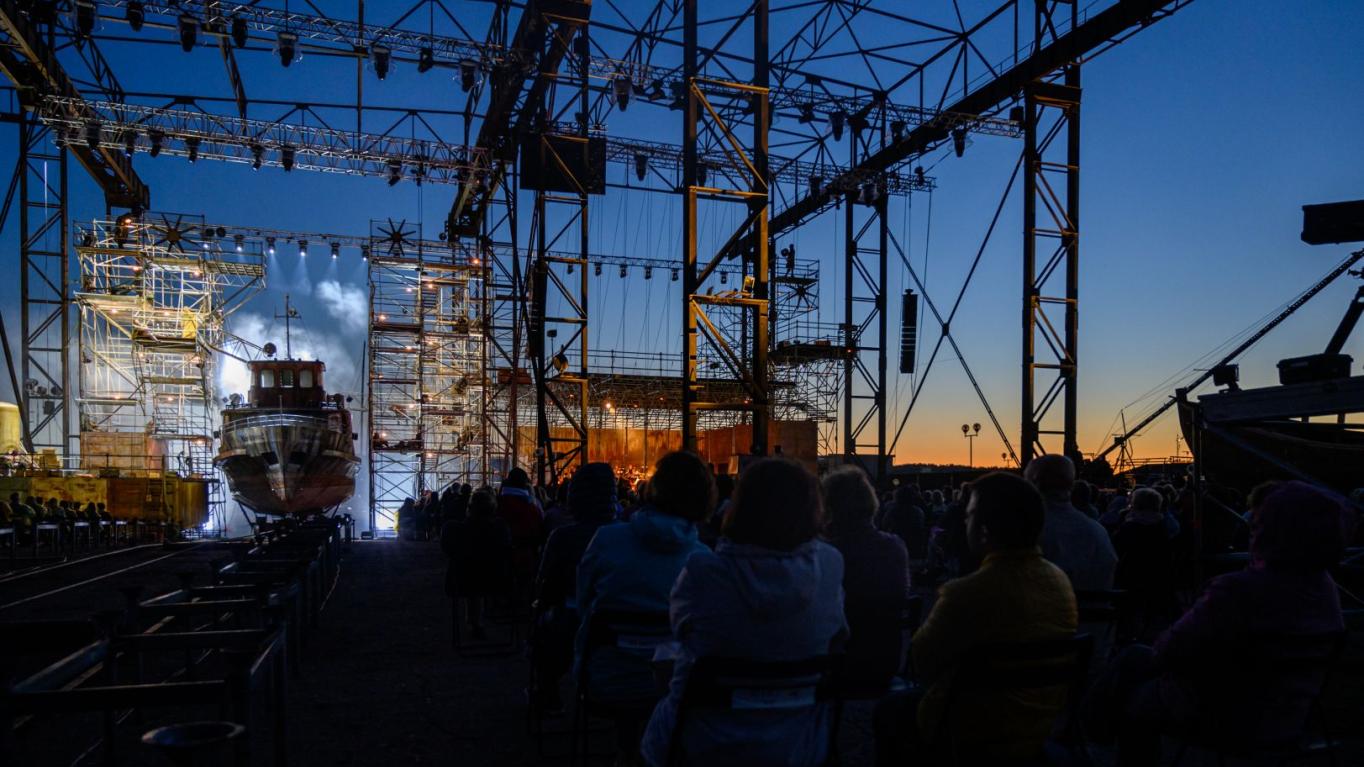 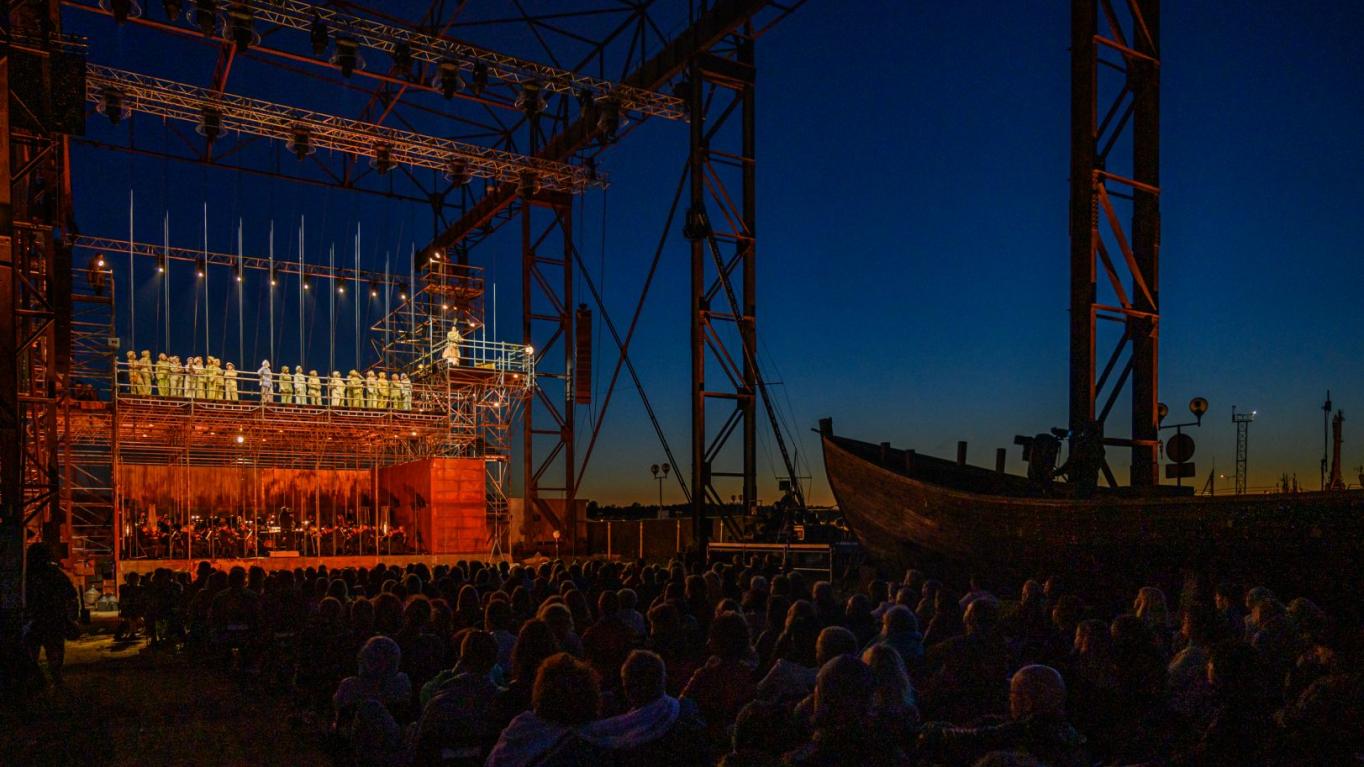