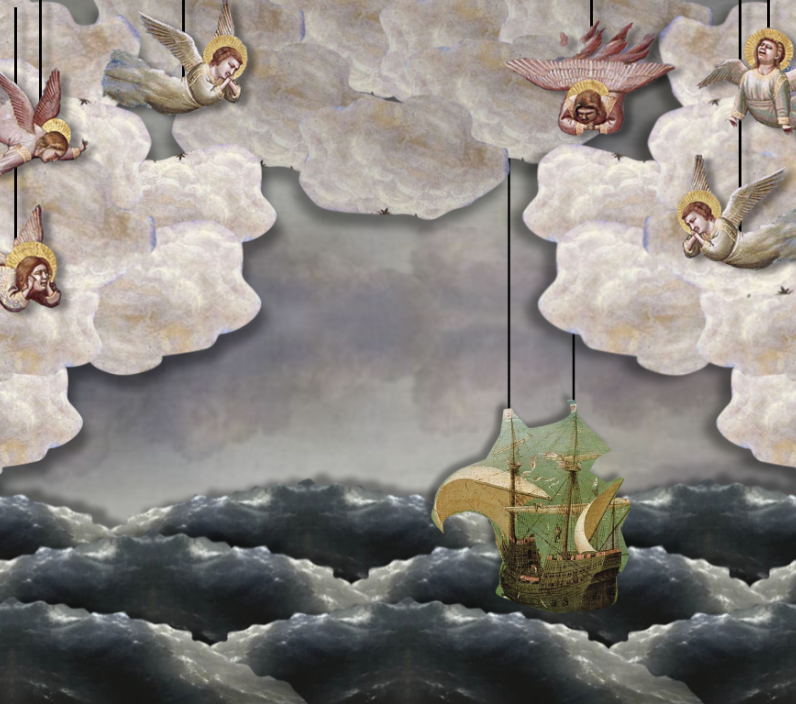 In love with an exiled count turned pirate, a young woman has been forced into a marriage with his worst enemy. Is there a way out of this dramatic love triangle?

Il pirata marked the beginning of young Bellini's fruitful collaboration with the librettist Felice Romani, called 'the Dante of his time', and of an international career as dazzling as it was short. Abandoning the tradition of happy endings, the gothic plot culminates in one of the first ‘mad scenes’ in the history of opera.

Bellini’s Il pirata is a masterpiece of bel canto, and Dmitry Korchak is a leading interpreter of this repertoire. In this concert version of Kolobov Novaya Opera Theatre Moscow, the Russian tenor is in the role of Gualtiero. He sings his love for Imogene which gives him strength ‘in the fury of the storm’ (‘Nel furor delle tempeste’)

In the 13th century a storm rages on the island of Sicily. Count Gualtiero is expelled from the island by Duke Ernesto. The enmity between the Count and the Duke is exacerbated by personal motives: Ernesto is in love with Imogene, Gualtiero’s bride, and compels her to marry him. Gualtiero gathers a band of pirates to oust the enemies from the island, but he loses the battle. He secretly meets Imogene, urging her to elope with him. Ernesto interrupts their reunion. They fight, and Gualtiero kills Ernesto. The Knights’ Council condemns the Count to death. Imogene goes mad with grief. The storm and the madness of the heroine - these scenes open and close the opera.

Bellini, by dint of his name and inclination, is the essence of bel canto. Those two words are simply the Italian for ‘beautiful singing’, and may be applied to any style or period, but it has become customary to use them to describe Italian opera of the first part of the 19th century, the primo ottocento. Of the three pre-eminent Italian composers of that era before the advent of Verdi in the early 1840s, it might be said that Rossini displayed more musical verve, Donizetti the greater dramatic aptitude, but Bellini's operas are the most beautiful. He was less prolific than his main rivals, with only 10 extant titles, because his life and potential were cut short in his 34th year.

Yet Bellini prized truth above beauty. The title role of Gualtiero in his third opera Il pirata was written for the star tenor of his day, Giovanni Battista Rubini, famous for his matchless command of cantilena, florid coloratura and stratospheric high notes, but less for his skill as an actor. There is a story of the precocious 25-year-old composer berating the great tenor by asking: ‘are you thinking about being Rubini or about being Gualtiero?’ ‘You are an animal’, he said, ‘show your passion: haven’t you ever been in love?’ Bellini demonstrated what he wanted in his own feeble voice but, according to a witness, ‘with his face and entire body so animated, he produced singing so pathetic that it constricted the heart and brought so much fire to the breast that it would have torn apart the hardest of men.’ Moved, Rubini joined in with his stupendous voice’. At last the composer was satisfied: ‘For the rest, remember to stand up when you practise and accompany your singing with gestures’.

A gallery of memorable heroines

Rubini went on to create two more Bellini roles: Elvino in La sonnambula and Arturo in his final opera I puritani, but today Bellini is remembered above all for the dazzling opportunities he provided for the expressive colours and powers of the soprano voice. The spurned priestess Norma may be the pinnacle, but she is by no means the prototype. Bellini endows each of his heroines with a different personality. The sleepwalker Amina is an innocent country girl. Elvira in I puritani is driven mad by the conflicts of civil war. Imogene, central pivot of Il pirata, is a married woman with a young child, tempted by the titular pirate to betray her responsibilities.

Bellini bestowed his trademark long-spun melodies on his prime donne in ways which define them as singers in the collective memory of audiences. Norma’s hymn to her goddess, ‘Casta diva’, is the most emblematic, immortalised by great singers from its creator Giuditta Pasta, who named her house on Lake Como after it, to Rosa Ponselle and Maria Callas and Montserrat Caballé. Just as beautiful are Amina’s dream-filled ‘Ah, non credea mirarti’, followed on awakening by her ecstatic cabaletta, ‘Ah, non giunge’; and Elvira’s visionary ‘Qui la voce’. If you love music which expresses emotion, you must seek out the best performances of these sublime inventions. The most memorable example from Il pirata is Imogene’s final memory of happiness before being summoned by funereal trumpets, ‘Col sorriso d’innocenza’.

What if Bellini had lived longer?

What might Bellini have achieved, had he lived as long as Rossini or Donizetti, let alone Verdi?  You notice a trajectory from the relatively early Il pirata, with its echoes of Rossini, towards the grandeur of Norma and the greater Parisian sophistication of I puritani. Yet, Bellini retains his individual voice, fragile but certain of its quality. Like others of that era who died young, Franz Schubert and John Keats, there is an undeniable sureness and completeness about his work. It is beautiful, but more than beautiful. In the words which conclude Keats’s Ode on a Grecian Urn:
Beauty is truth, truth beauty - that is all
Ye know on earth, and all ye need to know.