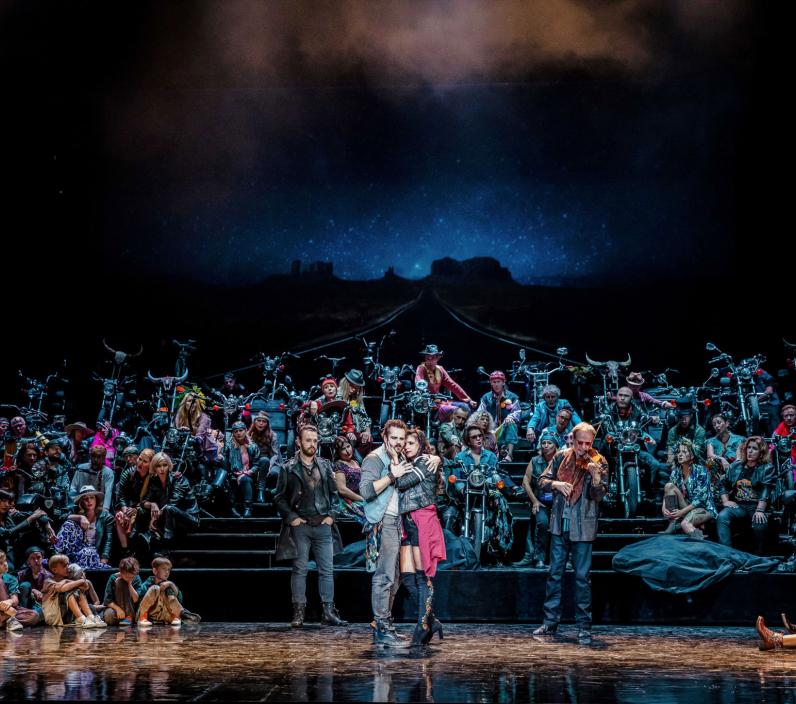 Paderewski
This performance is no longer viewable as video-on-demand for rights reasons but other material about the production is still available.

Ostracised for marrying outside their communities, a young couple are plunged into poverty. The devoted wife wants to keep giving love a chance, but her adventurous husband begins to question the cost to his freedom.

On the centenary of Poland’s regained independence, for which Paderewski worked so hard, his Manru opens the new season at the Polish National Opera. A story of love in the face of prejudice, this important work is a timely warning against xenophobia and intolerance.

Aza (Monika Ledzion-Porczyńska), happy that her beloved Manru (Peter Berger) has been found, tries to tempt him back to her and the Gypsy life. With the help of a fiddler (Stanisław Tomanek) and his old friend Jagu (Łukasz Goliński), Manru submits to the Gypsy within him and returns to being Aza’s lover and the chief of his community.

While celebrating a wedding, the village folk turn on Ulana (Ewa Tracz) for her impudence towards her family and community. Urok (Mikołaj Zalasiński) tries to protect her from the xenophobic mob but it is Manru (Peter Berger) who comes to her rescue. Jadwiga (Anna Lubańska) disowns her daughter as Ulana and Manru escape to their hut beyond the village.

Grzegorz Nowak conducts Paderewski's Manru at Polish National Opera. In this interview, he explains how the composer used a fiddle and cimbalom to evoke the sounds of a Gypsy camp. But what if there are no cimbalom players left in Poland today?

The villagers are preparing for an important celebration. Wealthy organiser Jadwiga laments that her daughter Ulana is involved with Manru, a Gypsy, a foreigner both culturally and racially, which to her and the whole village is an unforgivable crime. Hatred of the Other is stronger than parental love, and the wayward daughter additionally arouses her anger by the very fact of disobedience.

Jadwiga is further incited to anger by Urok, a shady character who serves as the village’s supplier of mind-changing substances and herbs. He appears to encourage the mother to show mercy, but having loved Ulana for a long time himself, he cannot stand the thought of her love for the Gypsy and their happy relationship which has resulted in the birth of a child. A lonely and bitter man, his heart is torn between hatred towards Manru and love for Ulana. When the latter arrives to ask her mother to help ease the poverty she suffers with her child, Urok torments the woman he desires with a vision of the misfortunes that will befall her for being with a foreigner. However, he gives in to her pleas, supported by the hope that his desire might be satisfied.

Keen to obtain herbs that would restore the passion which kept the Gypsy drawn to her body, Ulana doesn’t shatter Urok’s hopes. The mother demands that her daughter abandon Manru and return to her family home with her child, or else she must leave forever. Ulana’s love is unwavering and she chooses misfortune at her husband’s side. Enraged by this impudence, the community is roused to greater aggression against the ‘traitor’, augmented by the local men’s widespread desire for the lovely ‘Gypsy wench’, as they refer to her contemptuously. Manru comes to his sweetheart’s rescue and, prepared to lay down his life for her, saves her from the rabble. Shielded by Jadwiga, they escape to their hut beyond the village.

Ulana is taking care of the child while Manru is busy with his scrap metal. They are plagued by poverty and discouraged by a life with no prospects and no sense of security. It is impossible to go on like this much longer, and recalling their former passion fails to improve the mood. Manru feels that the price he is paying for abandoning a world in which he was free and important is too high.

The couple is visited by Urok, who keeps hanging around his beloved Ulana. Manru tolerates him since he is the only person in the surrounding world without any xenophobic hatred towards him. The Gypsy doesn’t know that the visitor has brought Ulana’s promised potion to rekindle her husband’s desire for her.

Suddenly, violin music starts playing, and it has a magical influence on Manru’s heart, evoking memories from his past life when he loved the Gypsy beauty Aza. His old friend Jagu has come, on a mission to bring Manru back to the Gypsy community. Urok fully supports this mission, hoping to get Ulana for himself. But Manru is faithful to her and turns down Jagu’s proposal that he come back to rule over the Gypsies and abandon the rural backwater. Happy, Ulana gives her husband the potion brought by Urok, but its effect is illusory and temporary. Manru flees from the hut, leaving behind his wife and the child, who mean less to him than his personal freedom.

The Gypsies draw near. Aza, happy that her beloved Manru has been found, cannot stand the fact that Gypsy chief Oros and most of the others treat Manru like a traitor and don’t want to take him in. He, too, cannot decide if he can really abandon his wife and child to start the new life with which Aza tries to tempt him. Jagu is here again with the trusty violin player; he convinces the Gypsies to accept Manru, and Manru to stay with Aza after all. To make this work, he has to get rid of Oros and replace him as the chief of this community of itinerant lovers of freedom.

Since power can seldom be seized without bloodshed, Manru’s new life is tainted with violence from the outset. They leave for the unknown that could become their heaven or their hell. Ulana arrives, searching for her beloved husband. She asks Urok to get him back for her, but it is too late. When the devastated girl wants to take her own life, Urok brings her young son to her, saving them both from doom and his own soul from all-powerful evil.

5 things to know about Manru

Ignacy Jan Paderewski was the most famous pianist of his time. He made excellent use of his extraordinary popularity and phenomenal contacts in the world of politics and finance by lobbying for the reconstruction of Poland. He later served as its first Prime Minister. As a French magazine puts it, Paderewski was a ‘double virtuoso’ – of the keyboard and of the rostrum. But he was also an important composer who left a legacy of over 70 orchestral, instrumental and vocal works. Among these were his Symphony in B minor, a massive work lasting 75 minutes; his popular piano miniature, Minuet in G; and his only opera, Manru.

2° A message to a nation

Manru is based on The Cottage outside the Village, Józef Ignacy Kraszewski’s novel about discrimination practiced against the Romani community. Published shortly before Paderewski was born, it touches upon themes especially dear to the open-minded composer: mutual respect, social unity and cultural diversity. For Paderewski, the need to enlighten the rural population inspired many of his activities, for in their upholding of traditions and their communal work he saw the ideal foundations of the re-emerging Polish state. But his opera was neither the first nor last adaptation of Kraszewski’s novel; in 1884 it was turned into a play by Gabriela Zapolska, and it formed the basis for the 1926 film The Gypsy Woman Aza, directed by Artur Twardyjewicz.

‘I have seldom worked on anything with greater pleasure and interest,’ Paderewski observed in the final months of composing Manru in 1900. The work, to which he devoted an unusual amount of attention, was created in stages over a number of years. Engrossed in his spectacular career as a pianist and public speaker, he found it hard to fit in creative work as well. But at Riond-Bosson, his freshly-purchased residence on the shores of Lake Geneva, Paderewski finally found the time and space to concentrate on his opus magnum. He thus joined his contemporaries Mahler and Puccini in finding a lakeside location to be best for a composer’s focus and stimulation.

The work received its world premiere in May 1901 in Dresden, where it was sung in German. Ten days later it was performed in Lviv then began a journey across venues throughout Europe and North America, where it was received enthusiastically by audiences and critics. To this day it is the only Polish opera to have been staged at the Metropolitan Opera in New York, where it was sung in English in February 1902. However, its star faded surprisingly quickly, and after this brief triumph Manru became forgotten for many years. Only recently are directors like Marek Weiss, who directs this new production at the Polish National Opera, rediscovering the Paderewski’s beautiful music and his timely artistic message.

‘Today there are probably about 25,000 to 30,000 Roma in Poland,’ says Wladyslaw Kwiatkowski, spokesman for the Association of Roma in Poland. His grandmother was the victim of tests carried out at Auschwitz by Nazi SS doctor Josef Mengele, and during the Nazi era the Kwiatkowskis lost more than 100 family members in concentration camps, executions and death marches. ‘Although the situation has got better over the years, there is still a lot of discrimination.’ He explains that in a little town not far from Auschwitz, Roma are discriminated against when looking for housing, and business owners forbid them from entering their premises. He sees education as key to improving relations: ‘Education for Poles, education for Roma - for everyone who lives here, so that we can succeed in living together.’