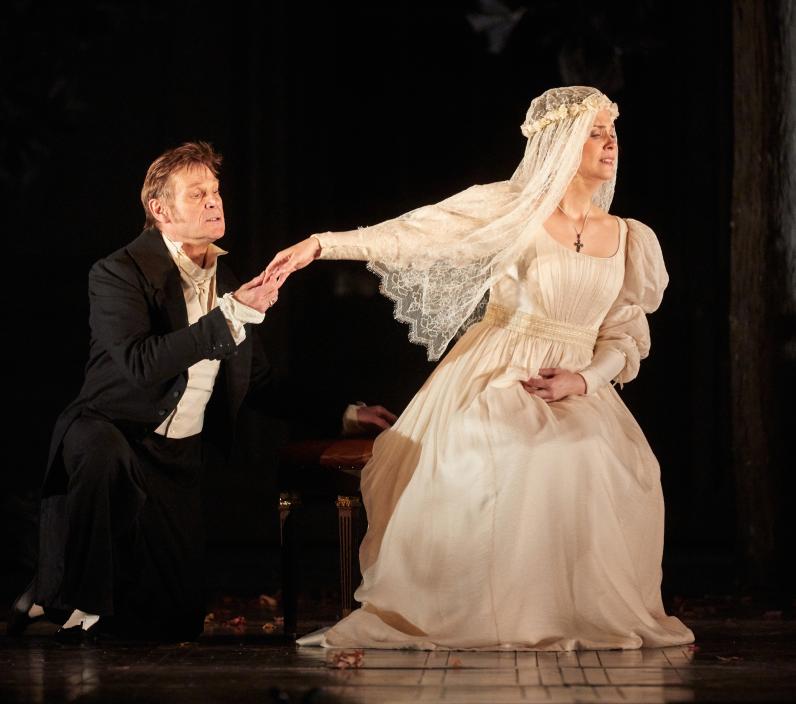 A count has designs on his personal valet's fiancée and is determined to stop their wedding taking place. Meanwhile, the countess tries to regain her husband's love by any means necessary.

Mozart's great comic opera is a tale of intrigue, misunderstanding and forgiveness. Christian Gerhaher plays the clever Figaro and Simon Keenlyside his aristocratic master in this revival of David McVicar's much-loved production at the Royal Opera House.

Countess Rosina (Dorothea Röschmann) suspects her husband of being unfaithful. Left alone, she ponders the loss of her happiness and wishes that her marriage was still as full of joy as it once was. Conducted by Antonio Pappano and directed by David McVicar.

Figaro (Erwin Schrott) is planning to wed Susanna but suspects Count Almaviva of wanting to exercise his newly reasserted feudal right to sleep with her before the consummation of their marriage. Figaro vows to unravel his master's schemes and thwart him. Conducted by Antonio Pappano and directed by David McVicar.

Cherubino (Kangmin Justin Kim) has the symptoms of a raging hormone attack on his adolescent body. After being dismissed from his position as the Count's page for being discovered alone with the gardener's daughter, he tells Susanna that, suddenly, every woman excites him to no end. Conducted by John Eliot Gardiner and directed by David McVicar.

The Count (Simon Keenlyside) has heard a noise from the closet. The Countess (Julia Kleiter) tells him it is only Susanna (Joélle Harvey), trying on her wedding dress. At this moment, Susanna re-enters unobserved, quickly realizes what's going on, and hides behind a couch. The Count shouts for her to identify herself by her voice, but the Countess orders her to be silent. Conducted by John Eliot Gardiner and directed by David McVicar.

Behind the scenes of The Marriage of Figaro

The Marriage of Figaro has everything you could wish for in an opera, not least superb music and colourful characters. Listen to what singers Christian Gerhaher, Simon Keenlyside, Joélle Harvey, Julia Kleiter and Kangmin Justin Kim think of Mozart's masterpiece and watch as conductor Sir John Eliot Gardiner and revival director Thomas Guthrie put them through their paces at the Royal Opera House in London.

It is the day of Figaro’s marriage to Susanna, maid to the Countess. Figaro, valet to the Count, is assessing the bedroom offered to him by his employer; it conveniently adjoins both the Count’s and the Countess’s apartments. Susanna points out that the room will also be ‘convenient’ when the Count chooses to reinstate the ‘Droit de Seigneur’, a feudal practice in which a local Count can ‘deflower the bride;’ a practice that he has recently abolished. Figaro determines to outwit his master.

But Figaro owes money to Marcellina, and has promised to marry her if he does not manage to repay her. He has also raised the ire of Dr. Bartolo, the Countess’s former guardian, for his role in helping bring about the Count’s marriage to the Countess. To complicate matters further, the young page Cherubino wants Susanna to intercede on his behalf with the Count, who has dismissed him from the castle after catching him alone with Antonio’s daughter, Barbarina.

Suddenly the Count shows up, causing disarray. Cherubino hides and hears the Count’s overtures to Susanna. The Count in turn hides, and overhears Basilio, the music master, making insinuations about Cherubino and the Countess. The Count emerges, discovers the unfortunate page, and sends him to rejoin his regiment.

A weeping Countess laments the loss of the Count’s love. Figaro reveals his plan to outwit the Count: he has sent him an anonymous letter implying that the Countess has a lover. Susanna points out that Marcellina can still invoke the debt and stop the wedding, and a second plan is hatched. Susanna will agree to meet the Count in the garden, but Cherubino will go disguised in her place. Figaro instructs the women to dress Cherubino appropriately.

The page flirts with the ladies by singing his latest composition. When he is half undressed, the Count arrives. Having received Figaro’s letter, he is in a jealous rage. Cherubino, hidden in the closet, knocks over a chair. The Countess, in a panic, pretends that the noise is Susanna, but refuses to unlock the door; meanwhile, Susanna rescues Cherubino, who escapes out of the window. Susanna locks herself in the closet.

The Countess attempts to explain to her husband the presence of Cherubino in her closet. She is as surprised as the Count when it is Susanna who emerges. The two women pretend that the whole episode was a trick to provoke the Count into better treatment of his wife. They confess that the letter was written by Figaro, who then joins them, unaware of the women’s revelations to the Count. When Bartolo, Basilio and Marcellina arrive with a lawsuit to force Figaro’s marriage to Marcellina, the Count is triumphant.

The Countess and Susanna open the third act with a plan to disrupt the Count’s amorous intentions. Susanna will agree to meet the Count that evening in the garden, but the Countess will go in her place, disguised as her maid.

On the advice of his legal consultant, Don Curzio, the Count insists that Figaro pay Marcellina at once or marry her. Figaro is saved by the timely revelation that he is the long-lost son of Marcellina and Bartolo; everyone but the Count and Don Curzio embraces their new relations.

Finally the wedding celebrations of Figaro and Susanna begin. Cherubino is unmasked among the bridesmaids, but Barbarina shames the Count into allowing him to stay at the castle. Susanna passes the Count the letter dictated by the Countess, confirming her evening rendezvous with him under the pine trees.

In the garden everybody is waiting: the Count and Figaro for Susanna; the Countess for the Count; Bartolo and Basilio to witness the revival of the ‘Droit de Seigneur.’ Figaro rails against the faithlessness of Susanna, while she looks forward to the conclusion of her plans.

The appearance of Cherubino is potentially disastrous, but the Count arrives and woos ‘Susanna,’ in fact his wife. The jealous Figaro is then confronted by Susanna, disguised as the Countess, but he recognises his bride and they are reconciled – witnessed by the Count, who believes he sees his wife in the arms of his valet. He denounces her; the real Countess unmasks herself and forgives her husband. The day ends in celebration.

5 things to know about The Marriage of Figaro

Mozart had come to Vienna in 1782 intending to write for Joseph II’s Singspiel theatre. However, Joseph II disbanded this group and set up a new Italian opera company in 1783. Eager to write an opera buffa, Mozart eventually managed to secure the services of Lorenzo da Ponte, official librettist for Joseph II’s opera company. Their first commission, The Marriage of Figaro, had its premiere at the Vienna Court Theatre on 1 May 1786.

Da Ponte took the libretto for The Marriage of Figaro from the play La Folle Journée, ou le Mariage de Figaro by the French playwright and diplomat Pierre-Augustin Caron de Beaumarchais. The play was considered scandalous – largely due to Figaro’s Act V monologue in which he rails against the aristocracy – and was banned in Vienna. Da Ponte claimed that it was only due to his powers of persuasion that Joseph II allowed his and Mozart’s opera to go ahead.

The intricacy of the musical ensembles in The Marriage of Figaro has been particularly noted; unusually for the time, they carry the drama’s action as much as the recitatives. Particularly complex and fine examples include the end of Act II (a vast ensemble in which more and more characters enter and the drama becomes increasingly complicated) and the Act III sextet, in which Figaro discovers the identity of his parents.

David McVicar’s elegant production, set in 1830, places Mozart’s opera in the context of Revolutionary Europe, when many conflicts between classes were as yet unresolved. From the Hambach festival in Germany to the July Revolution in France to Spain, where the Inquisition was about to finally be abolished, people throughout the continent were restless to live under more liberal democracies and to hold the powerful to account. In this spirit, McVicar’s Figaro is a cunning and intelligent man, very determined to outwit his aristocratic master.

McVicar’s handsome production has served the Royal Opera House well since its 2006 premiere. In this sixth revival, John Eliot Gardiner conducts arguably its most interesting and outstanding cast yet. British baritone Simon Keenlyside, renowned for acting his characters just as well as he sings them, plays Count Almaviva alongside one of the world’s most celebrated lieder singers, German baritone Christian Gerhaher, who makes his role debut as Figaro. The young American soprano Joélle Harvey sings ‘the most delectably mellifluous Susanna’ according to the Financial Times in its 5-star review, while Korean-American countertenor Kangmin Justin, aka ‘Kimchilia Bartoli’, makes the mould by becoming the first ever man to play Cherubino in the company’s long history.