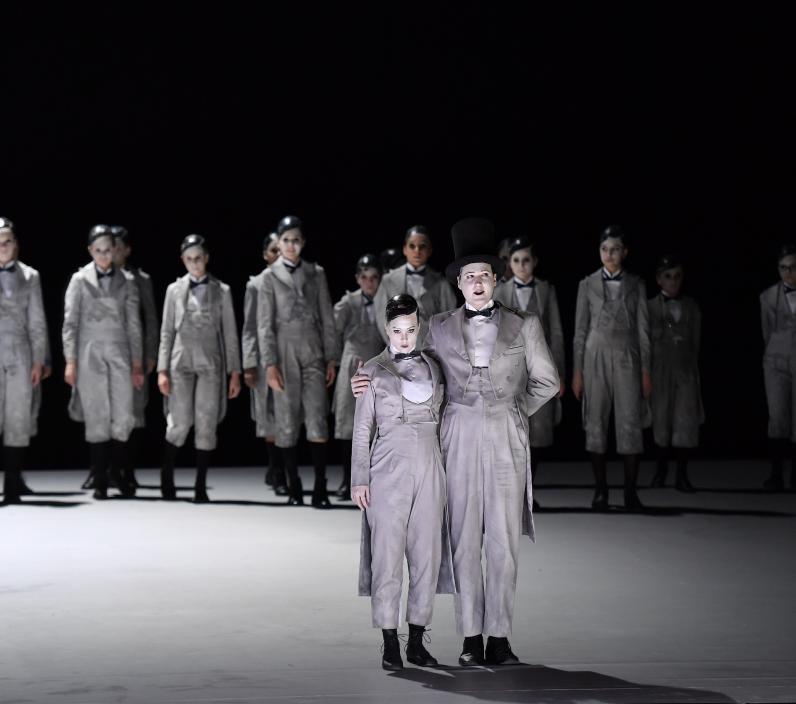 When a fairy king quarrels with his queen over a young changeling, he orders his servant, a mischievous sprite, to play a prank on her with hilarious consequences.

After Oberon and Tytania fell out over a boy that Tytania refuses to give up to her husband, Oberon decides to get back at her and sends Puck in search of a magic flower. Four young people appear: the lovers Hermia and Lysander wish to marry and have run away to escape Hermia’s father’s order to wed Demetrius. Demetrius, for his part, is pursued by Helena, whom he does not love.

As they leave, Puck returns with the herb, and Oberon instructs him to seek out Demetrius and anoint his eyes so as to reciprocate Helena’s love. Next, six rustics, led by Quince and Bottom, enter and discuss the rehearsal of a play which they hope to perform at Theseus and Hippolyta’s wedding. Puck mistakenly anoints Lysanders’ eyes, causing him to transfer his allegiance to Helena, while Oberon anoints Tytania’s.

Bottom and his companions rehearse their play. Puck mischievously gives him an ass’s head. Tytania awakes and is enraptured at the sight of Bottom. She summons four of her attendants to wait on her new lover, and then she and Bottom fall asleep. Oberon observes this with glee, but is angry when he discovers that Puck has confused Demetrius with Lysander. Oberon’s attempt to correct this mistake makes things even worse: the two men who were in love with Hermia now both love Helena. When the four lovers quarrel violently, Oberon orders Puck to separate them and restore order.

Oberon, now in possession of the disputed boy, is prepared to make up with his wife Tytania. When he frees her from her infatuation, they are reconciled. The four young people wake up from their spell, finally happily paired off: love is renewed between Hermia and Lysander, and new-born love sparks between Helena and Demetrius. They decide to ask Theseus’s permission to marry. The rustics lament the loss of their friend Bottom, and the inevitable cancellation of their play. Bottom awakens with his head returned to normal, thinking he only had a very strange dream.

Theseus gives the young lovers permission to marry. He then invites the rustics to perform their entertainment at his and Hippolyta’s wedding reception. When midnight strikes, Theseus declares that it is time for bed. Oberon, Tytania, the fairies and Puck appear and give their blessing.

5 Things to know about A Midsummer Night’s Dream

Britten’s opera is the first to be inspired by Shakespeare's A Midsummer Night's Dream. If this seems bizarre in view of the play’s lasting popularity, musicologist Hélène Cao recalls that in Purcell's The Fairy Queen, a 1692 semi-opera with a strong emphasis on spoken theatre, the main characters do not sing.

Weber's Oberon (1826), also rich in spoken dialogue, owes more to Wieland's poem than to Shakespeare's play. Mendelssohn's overture and stage music (1826 and 1843) also bypass the opera genre. It was not until Britten in 1960 that the voices of Oberon and Tytania resounded on the operatic stage.

2° From Shakespeare to Britten

According to Britten, the time was lacking for a libretto to be commissioned. Was this a pretext or a real technical constraint? In any case, he directly set Shakespeare’s text to music, written around 1594-96 on the occasion of a noble wedding. In collaboration with Peter Pears, Britten pruned about two-thirds of the text and designed a three-act structure.

In his adaptation, Britten’s motto was spatial condensation and temporal compression. Not only did he not shy away from eliminating certain roles altogether and reduce the presence of others, but he also limited the setting to Oberon’s fairy kingdom, cutting any mention of mythological Greece that could be found in Shakespeare’s play. ‘I do not feel in the least guilty at having cut the play in half’, Britten said. ‘The original Shakespeare will survive.’

3° The vocal world of A Midsummer Night’s Dream

'Operatically, it is especially exciting because there are three quite separate groups - the Lovers, the Rustics and the Fairies - which nevertheless interact. Thus in writing the opera I have used a different kind of texture and orchestral “colour” for each section.' Benjamin Britten, The Observer, 5 June 1960.

Britten distinguishes each group of characters by granting them a singular vocal typology. To the magical world, Britten attributes high-pitched voices: there is the children’s choir, Tytania’s coloratura and Oberon’s countertenor - a rarely heard type of voice on a stage in 1960 - that had been tailored specifically for Alfred Deller.

The mostly low voices of the Rustics sing deliberately simple melodic lines, which convey the commoners’ rough habits. With tender humour, Britten represents the awkwardness of their theatrical ambitions. When Flute/Thisbé sings ‘O wall, full often hast thou heard my moans’, the accompanying solo flute does not evolve in exactly the same tone, the superimposition of the lines giving an off-key impression.

The lovers' quartet remains faithful to classical and romantic opera’s conventions: one couple is formed of a mezzo-soprano (Hermia) and a tenor (Lysander), another consists of a soprano (Helena) and a baritone (Demetrius). The disturbances of this symmetry (Demetrius has eyes only for Hermia, while Lysander is infatuated for Helena after being bewitched by Puck) are also reminiscent of Mozart's Così fan tutte.

Despite its literary source, A Midsummer Night's Dream does not entirely escape Britten's obsessions, evoking an adult’s love of a child (the theme at the heart of The Turn of the Screw and Death in Venice), and prolonged by the unnatural union between a human being and an animal (Tytania and the Donkey).

It also treats the conflict between dream and reality, between innocence and amorality, the main themes of Britten's lyrical theatre, even if these themes and social preoccupations take a back seat here. If Shakespeare inspired one of Britten's rare comedies, along with Paul Bunyan and Albert Herring, its lightness and humour are veiled with bitterness. In order to keep the tragic aspect of existence at bay, is it necessary to flee from reality into a dream world?

Ted Huffman’s starting point for A Midsummer Night's Dream was the central role of the changeling, a minor role that tends to be forgotten in Shakespeare's play. Indeed, Huffman wonders why Britten and Pears chose to open their work with Titania and Oberon's dispute over the child’s custody. The search for this answer has him to study the tensions ‘between the fairy universe and the human one in which this child represents a sort of intermediary. Although he temporarily takes care of the fairies, the young boy depends on the world. He will eventually grow up there and have to leave the fairy world of imagination.’

Inspired by the Elizabethan stage, Huffman does not hide the theatrical element. ‘We don't seize any pretext for this place to become something else. Puck uses the space to build imaginary worlds around the human characters using his human subordinates. As a result, a kind of confusion reigns between those on the inside and those on the outside, between what is real and imaginary, as the humans sink into his spells.’

In the end, Huffman has humans invest the fairy world, ‘this night forest that represents our imagination’, because their own worlds do not allow them any space to get to know each other better. ‘This is an admission of failure for the ‘civilized’ world, which cannot solve everything.’