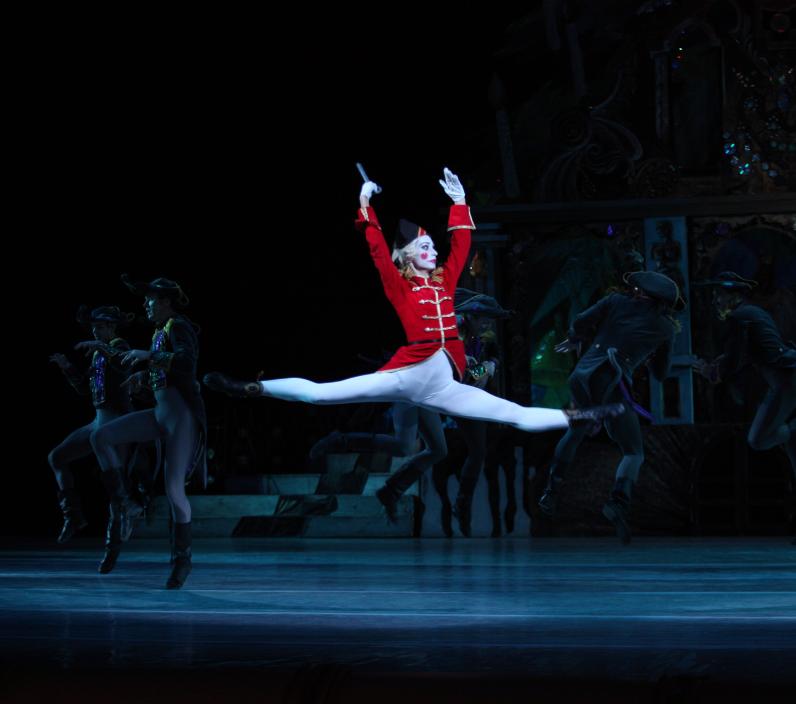 Tchaikovsky
This performance is no longer viewable as video-on-demand for rights reasons but other material about the production is still available.

On Christmas Eve, a young girl has a dream. She stumbles upon a magical adventure when she is given an enchanted Nutcracker doll. Can she break the spell that turned him from a boy to a toy?

Ballet Company of the National Opera of Ukraine's staging of Nutcracker has won the hearts of children and adults all around the world. Behind the charming tale capturing the festive spirit, emerges journey from childhood to adulthood with much virtuosity along the way; all set to Tchaikovsky's immediately recognisable magnificent music.

Dance of the Sugar Plum Fairy

The prima ballerina of the ballet company of the National Opera of Ukraine, Iuliia Moskalenko, who portrays the leading role of Clara in The Nutcracker, also slips into the role of the Sugar Plum Fairy here. A tour de force for any dancer.

Marie is given an enchanted Nutcracker doll on Christmas Eve. As midnight strikes, she creeps downstairs to find a magical adventure awaiting her and her Nutcracker.

The magician Drosselmeyer transforms the drawing room for a battle between mice and toy soldiers. During the battle, Marie saves the Nutcracker's life - so breaking a magical spell that turned him from a boy to a toy - and the Mouse King is defeated. In celebration, Drosselmeyer sweeps Marie and the Nutcracker off to the Kingdom of Sweets, where they meet the Sugar Plum Fairy and take part in a wonderful display of dances. The next morning, Marie's adventures seem to have been more than just a dream.

5 things to know about Nutcracker

Nowadays, Nutcracker is seen as a heartwarming Christmas tale to share with our children. Yet E.T.A. Hoffmann’s original fantastic tale Nutcracker and the King of the Rats (1816) is far from heartwarming. Gloomy, abusive and violent, it was a forceful accusation against bourgeois culture and a poignant coming-of-age story. E.T.A. Hoffmann invites his readers to follow little Marie on her travels into the unconscious, unfolding a world of childhood dreams and nightmares.

After the success of Tchaikovsky’s second ballet Sleeping Beauty in 1890, the director of the Imperial Theatre Ivan Vsevolozhsky commissioned a two-part programme from the composer, consisting of an opera and a ballet. The ballet opening alongside Tchaikovsky’s last opera Iolanta was none other than the famous Nutcracker. For the ballet, Tchaikovsky collaborated with the Imperial Russian Ballet’s choreographer Marius Petipa, with whom he had already worked on Sleeping Beauty. Petipa gave Tchaikovsky very meticulous composition instructions concerning the tempo and length of each number.

Premiering on 18 December 1892, Nutcracker was not particularly well received by the public and the critics. Tchaikovsky himself did not care for it greatly. ‘Apparently the opera gave pleasure,’ he wrote to a friend, ‘but the ballet not really; and, as a matter of fact, in spite of all the sumptuousness it did turn out to be rather boring.’

Time would prove Tchaikovsky wrong, as the score has become one of his most famous compositions. His musical exploration of the land of childhood was indeed quite original up to his choice of instruments. Tchaikovsky was among the first major composers to use the celesta or bell piano, which he discovered during a trip to Paris. First using it in the symphonic ballad The Voyevoda the year before, Tchaikovsky insisted on the celesta for the ‘heavenly sweet sound’ it grants to the character of the Sugar Plum Fairy in her famous Dance.

Tchaikovsky also used children’s toy instruments for the Christmas party scene, noting ‘(child's trumpet), cuckoo (sol, mi), rattle, drums, cymbals, depending on whatever children's instruments will be available’. Tchaikovsky was allegedly very pleased with the effect of the celesta and wanted the music to be performed rapidly before anyone could steal it.

When Petipa created the first Nutcracker choreography, he set out to create a piece of entertainment for the festive season and in particular for the family of Tsar Alexander III. Dumas' lighthearted version allowed him to include a second act that focused on the joy of pure dance. Tchaikovsky however, remained indebted to Hoffman's original romanticism.
Over the years, choreographers using Tchaikovsky's music have had to choose which interpretation of the fairy tale to adapt. Some will endeavour to recreate the enchantment of childhood in the spirit of Petipa's ballet, while others will adopt Hoffman's gloomier vision, not shying away from blurring the line between dream and madness.

The National Opera of Ukraine was founded in 1867, when a small ballet was directly established. Gradually, the Opera's troupe has become more professional and has increased the size of its repertoire, offering performances applauded for their technical skill and panache.

One of the first milestones in the company's early career was the premiere of Tchaikovsky's ballet The Oprinchnik in the presence of the composer himself, who did not fail to praise the company for its excellence. He later insisted that his ballets and operas be performed in Kyiv, considering the artists to be equals to those of Moscow and St. Petersburg.