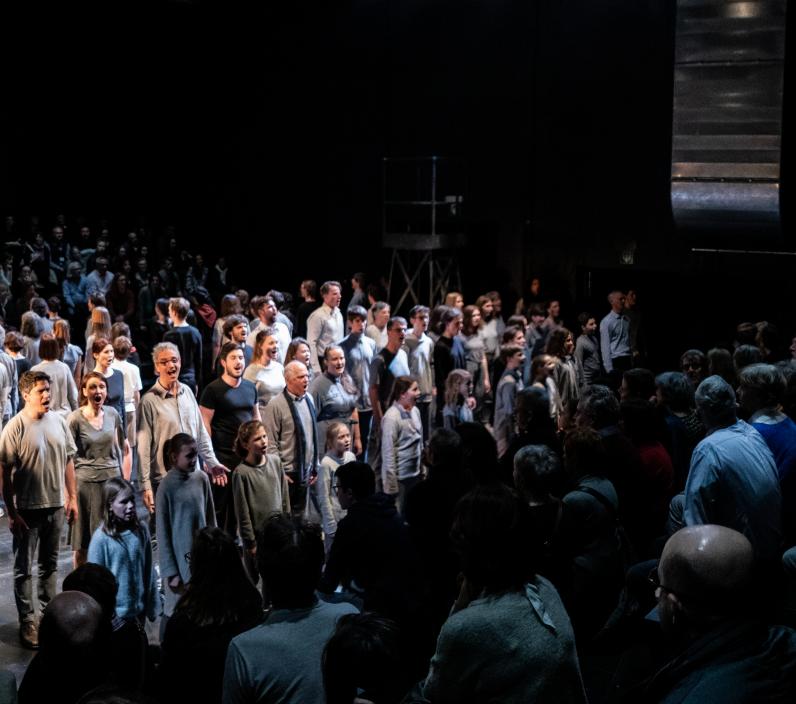 Moody
This performance is no longer viewable as video-on-demand for rights reasons but other material about the production is still available.

When a young boy is put on the train in the direction of Auschwitz, his fate seems sealed. But when his mother pushes him off the train, he manages to escape and carve out a new life for himself.

Inspired by the true story of Simon Gronowski who was pushed off the train from Mechelen to Auschwitz by his mother in Boortmeerbeek, Belgium, in 1943, Howard Moody has composed an opera bringing together professional musicians and amateur performers – both adults and children – in a unique theatrical experience.

Epilogue from the opera Push – based on the story of Simon Gronowski, an 11 year old Jewish boy who was pushed from the train (Convoi XX) on April 19 1943 by his mother, on the way to Auschwitz Concentration Camp.

A virtual performance during the April 2020 Coronavirus lockdown by members of the casts from previous productions of Push in Battle, Chichester, Salisbury, London and Brussels.

1. ARREST
Scanning the sky, a group of people meditate on how comet collisions and changes in constellations reflect recurring situations in the world. The group is surrounded and led away by threatening guards.

2. TRAPPED
They're all gathered in one camp. Simon and his sister describe how their neighbours have turned against them; around them, the guards are questioning their own actions. Fear begins to set in.

3. TOGETHER
The prisoners sing together and, under pressure, come to form a community, while the children play. Under the glow of a red moon, Simon and his sister recall their mother's visit to a fortune-teller, who told her that her son would be lucky. While he sleeps, Simon remembers his mother's eyes and his father's grief and sings his dreams.

4. UNCERTAINTY
Prisoners are awakened by a dazzling light and resounding orders. They are given signs to wear around their necks with numbers that are also written on their wrists. Simon is given the number 1234 and his mother the number 1233. The groups are separated, and Simon and his mother are pushed onto a train. The child turns around and sees his sister for the last time.

5. PUSH
The prisoners, crammed into a moving train, are panic-stricken. A group of resistance fighters managed to slow down the train, and in the confusion, the prisoners tried to escape. The train is still too fast to jump off safely, but Simon's mother chooses to push her son to escape: ‘She pushed me. I jumped and ran to stay alive.’

6. ESCAPE
The children run, a refrain goes round and round in their heads. Simon tells how he arrived in a small village where a man helped him and put him on a train back to town. There he found his father and was forced to hide.

7. SOME YEARS LATER
As he is about to die, the guard hears that Simon has begun to tell his story. He acknowledges the role he played to Simon and asks for his forgiveness. Faced with the expression of his guilt, Simon grants him forgiveness.

8. EPILOGUE
Simon stresses how important it is for him to tell his story, to live in the present and to seek optimism, joy and friendship. He sings that his mother gave birth to him twice, pushing him towards life and then towards freedom.

On April 19, 1943, in the midst of the Second World War, three young Belgian resistance fighters, armed with a single pistol, attacked a Nazi train carrying 1600 Jewish deportees to Auschwitz, where certain death awaited them. After halting the train with a false emergency signal, Jean Franklemon, Robert Mastriau and Youra Livchitz opened the carriage doors with bolt cutters and helped the prisoners escape from the train. Others took advantage of the general chaos to jump off when the train started moving again. Known as the attack on the 20th convoy, this historic event marked the only occasion on which Jewish deportees were freed on such a massive scale.

That night, 231 people were able to escape deportation, many of whom were recaptured later. The youngest to escape was Simon Gronowski, an 11-year-old boy from Brussels, who was pushed off the train by his mother. Unable to follow him, she would be gassed upon arriving in Auschwitz. Left to his own devices, Simon was hidden by several Belgian families during the rest of the war.

Simon Gronowski, Enfin libérés (Finally free)
Can the unforgivable be forgiven? The victim can grant forgiveness if the guilty party asks for it and sincerely regrets his act. How can one forgive the one who is proud of his crime and is ready to do it again? Forgiveness without repentance carries the seeds of forgetting. Forgetting is a danger to humanity. Even with repentance, forgiveness does not erase crime.

When the British composer Howard Moody met Simon Gronowski following the performance of his opera Sindbad – A Journey Through Living Flames in Brussels in 2014, he was so moved by the latter’s life story that he decided to adapt it into an opera. The idea for Push was born. The opera nonetheless transcends historical facts so as to resonate with the experiences of prisoners and refugees today.

Moody conceived the project as a community opera, bringing together professional musicians and amateur performers – both adults and children – in a singular theatrical experience. Since its premiere in Bexhill, United Kingdom, the opera has been performed several times before coming full circle to be shown at La Monnaie in Belgium in 2019. Simon Gronowski attended the performance.

Sensitive to Gronowski’s humanist outlook - the belief that you have to know yesterday’s barbarity to defend today’s democracy -, the stage director Benoît De Leersnyder was looking for a stage language that would bear witness to history while drawing parallels to today’s suffering.

‘While numbers dehumanize the victims,’ De Leersnyder writes, ‘in our production, the story of Simon and Ita [Simon’s sister, who died in Auschwitz] is projected in its entirety on the screens. This is in an attempt to give it back some of its humanity and let it resonate in every listener. In the chorus passages, however, the video images suggest parallels with the current world situation. In the light of the Shoah, today's refugees find a place in our performance - through a commentary, a testimony, a suggestion, a warning…’

About us, here and now

Emilie Lauwers, who created the set and costumes for Push, reflects on how she envisaged it as an experience to be confronted, rather than watched comfortably sitting in a velvet armchair. The scenography, the placement of the public and the orchestra is the fruit of their reflection:

‘When the audience joins the hall by a full freight elevator, and they find themselves on stage,’ Lauwers explains, ‘the orchestra, placed on a podium, blocks the exit. Even before everyone can safely take their place as a spectator, the opera begins. The first scene is called ‘Arrest’. From the stands, guards are watching the public. The choir singers have already taken their place within the public - everyone is arrested. Push is not about others in a war long ago, but about us, here and now.’