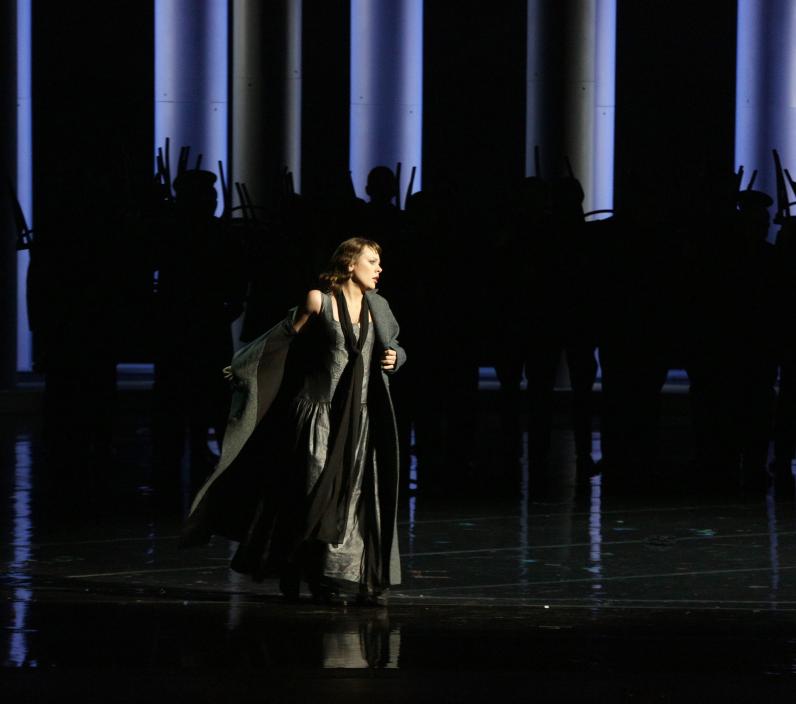 The Queen of Spades

Tchaikovsky
This performance is no longer viewable as video-on-demand for rights reasons but other material about the production is still available.

Enamoured with an unknown lady, a young soldier discovers that her grandmother holds a secret to win at cards. Although his beloved requites his love, happiness slips out of reach when his obsession with the powerful secret drives him to madness.

Set in imperial Russia, Tchaikovsky’s late brooding thriller about a fanatic gambler is a tour de force of stirring melancholy, consuming passion and grand sweeping orchestration. If the opera saw the light of day thanks to his brother, the librettist Modest Tchaikovsky, The Queen of Spades soon became Pyotr I. Tchaikovsky’s personal obsession: composed in only 44 days, he considered it a masterpiece.

A crowd of nursemaids, governesses, strollers and gamblers sing in a lovely May morning...

'At last the Lord has sent us a sunny day.
Sweet air, beautiful sky, just like a May day.
How delightful it is to stroll all day long!
Many years have gone by
Since we have since we have seen such weather
In days of old, we had finer summers, autumns and springs.'

It’s a rare moment of fine weather in Saint-Petersburg. Citizens are out strolling. Herman’s acquaintances discuss his bizarre behaviour: every night he comes to the gaming house, but instead of gambling he watches others play. Herman opens up to Tomsky about his secret love for a girl he doesn’t know. Prince Yeletsky receives congratulations on his engagement. The Countess enters, accompanied by her granddaughter Liza. Yeletsky presents Liza to everyone as his bride. Herman can’t control the sudden anxiety: this is his unknown beloved. The eyes of all those present at the unfolding drama meet. They realize that there is a mysterious connection between them all. A sinister premonition embraces each person. The Countess leaves. Tomsky tells the story of how, years ago, she learned from Count St. Germain a secret formula of the three cards that guarantee to win. Herman’s friends make jokes suggesting he takes the crone as his lover and charms out the secret of the three cards. The storm begins. Herman is left alone amidst the raging weather. He swears a solemn oath to win over Liza.

Liza spends the eve of the wedding with her girlfriends. Polina sings a sad song followed by a merry dance. The governess sent by the Countess scolds the exhilarated girls and sees the guests out. Left all alone, she finds herself thinking of the mysterious stranger. Suddenly Herman enters the room. Liza is torn between the sense of duty and the passion growing in her. Like a vision of death, the Countess appears. When she leaves, Liza declares her love to Herman.

Liza meets Herman at the ball. She gives him a key to the secret door that leads to her room through the Countess’s bedroom. The desire to learn the formula of the three cards possesses Herman’s mind entirely.

Herman enters the Countess’s bedroom and hides in there. Having returned from the ball, the mistress of the house longs for the past and reminisces about her youth. Herman comes out of his shelter and pleads the Countess to reveal her secret to him. Hearing no answer, he then threatens her. Suddenly Herman realizes the Countess is dead. At that moment Liza enters and becomes a witness to the terrifying denouement.

Herman reads the letter from Liza. She believes him to be innocent and is waiting for him. In the state of delirium, he remembers the Countess’s funeral. He imagines she winked at him from the coffin. He sees the ghost of the Countess and hears the names of the three cards: three, seven, ace.

Liza is waiting for Herman on the embankment. Realizing he is to blame for the Countess’s death, in despair, she throws herself into the water.

Herman comes to the gaming house and wins two times in a row. In the third game, he is opposed by Prince Yeletsky. Herman wants to bet everything on the ace in his hand, but the winning card turns out to be the queen of spades. Having lost all the money, he ends his own life.

5 things to know about The Queen of Spades

As with Eugene Onegin eleven years prior, Tchaikovsky found his inspiration in Alexander Pushkin’s work. Pushkin’s gothic novella Pikovaya Dama, written in 1833, had been adapted twice before: in 1850 by Fromental Halévy of La Juive fame and in 1864 as Pique Dame an operetta by Franz von Suppé. The French-sounding transliteration Pique Dame of the original Russian title has often referred to Tchaikovsky’s opera as well.

Pushkin is commonly considered to be the greatest Russian poet and founder of modern Russian literature. It is thus not surprising that his work has sparked many a Russian composer. Mikhail Glinka was the first of note to set Pushkin to music in Ruslan and Lyudmila. Nikolai Rimsky-Korsakov, Sergei Rachmaninoff and Igor Stravinski followed suit. Modest Mussorgsky's monumental opera Boris Godunov can be considered as one of the most influential opera’s to spring from Pushkin’s original imagination.

‘Either I am horribly mistaken, Modya, or this opera is a masterpiece.’ Pyotr Tchaikovsky wrote to his brother Modest in 1890. If history proved him right, we have his brother to thank. Modest Tchaikovsky began writing the libretto for the composer Nikolai Klenovsky in 1887. Soon the idea of convincing his brother to compose the score imposed itself. A year later, Modest confessed to him in a letter ‘Had you been writing music for this libretto, I would have been scribbling my poems ten times as enthusiastically.’

Once persuaded, Pyotr Tchaikovsky set to work feverishly. He composed the vocal score in only in 44 days in Florence, after actively participating in the creation of the scenario and libretto. Not unlike his possessed protagonist Herman, Tchaikovsky became increasingly obsessed with his creation. Composing the confrontation between Herman and the Countess horrified him, and Herman’s death moved him to tears. In a letter to Grand Duke Konstantin Konstantinovich, he confessed ‘I wrote it with unusual zeal and enthusiasm, having suffered and felt vividly all that is happening in the opera (to such an extent that for a time I feared that the appearance of the ghost of the Queen of Spades), and I hope that all my delights, worries and enthusiasm as the author, reverberate in the hearts of a sympathetic audience.’

3° Unlucky at cards, unlucky in love

In Pushkin’s cynical novella, Herman merely uses Liza to learn her guardian’s secret of winning at faro. When Liza discovers his treachery, she leaves him and marries a civil servant. Herman loses at faro, goes insane and is committed to a psychiatric institution.

The Tchaikovsky brothers changed the plot substantially. No longer is the Countess Liza’s guardian, having been promoted to the status of grand-mother. Herman genuinely loves Liza, his obsession with the Countess’s secret does only taking hold of him gradually. When Liza learns the truth, she dramatically kills herself. Indeed, Tchaikovsky offers Herman the possibility of a purposeful, loving existence when Herman and Liza first fall in love. Yet his compulsive greed leads him to cast her aside so that his self-destruction strikes as woefully irrational and avoidable.

4° A journey from light to darkness

The Queen of Spades is a study in betrayal, ambiguity and secrecy.  It is pervaded by a dark sense of foreboding, advancing from light to darkness, from the tangible to a supernatural world, from life to death… A storm obscures the sky, candles are snuffed out, three people die by night and a ghost appears.

Musically, too, an apprehension can be felt. The prelude introduces a motif from Tomsky’s ballad, another appears when Herman confronts the Countess in Act II. Polina’s song about love ending in death emerges when Herman declares his love for Liza. Numerology plays an important role, both thematically and in the score. The numbers assigned to the secret three cards - 3, 7 and ace, that is 1 - shape the opera. Musicologist Simon Morrison summarises the structure as ‘3 acts, 7 parts, 1 score.’

Stanislavsky and Nemirovich-Danchenko Moscow Music Theatre’s artistic director Alexander Titel, who directed this production, shares his vision of the opera. ‘What is the essence of The Queen of Spades? Is this opera a love story? In a way, it is. But so is any opera. Two men fall in love with the same girl. One of them is handsome, successful, comes from a respectable family. All the possibilities in life are laid out in front of him. The other one is a nobody – angry, broke, nameless. But, as it often happens, the girl loves this other one.

Is this opera a story of gambling? I’d say it is not. Although the game does occupy a very important place here. One could even say that this is a story of two card games with half a century interval. The first takes place one day in Versailles au jeu de la Reine. And the second happens 50 (or is it 60?) years later in Saint-Petersburg. Everything else is in-between.

This is a story of fate ruling over the destinies of people who live in the city of tragic greatness – Saint Petersburg. It also becomes one of the main characters – a ghost-city of monumental beauty built within only 200 years on an extraordinary and unprecedented scale. A perilous city built on bones drowned in the swamp, absolutely European and absolutely Russian at the same time. The city that gets flooded every now and then. The cradle of both Golden and Silver ages of the Russian art…’