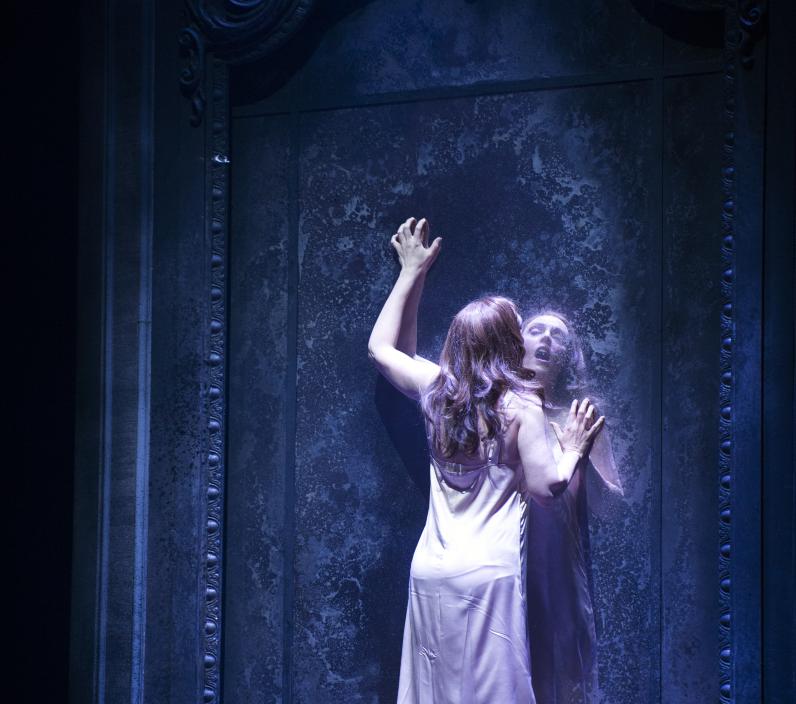 Everybody knows Jupiter likes to chase women… and Semele won’t have an easy time resisting his charms!

Act I. Ino understands the love that unites Jupiter and Semele (Nicole Chevalier). Cadmus announced the Semele's abduction by an eagle. Everyone mourns her disappearance. Semele appears from heaven, sighing with love for Jupiter. Conducted by Konrad Junghänel and directed by Barrie Kosky.

Behind the scenes of Semele

Feature length documentary about the making of the Komische Oper’s new production of Semele, staged by Barrie Kosky. Take a look behind the scenes to find out about rehearsals and more. Allan Clayton (Jupiter), Nicole Chevalier (Semele), Philipp Meierhöfer (Cadmus, King of Thebes) and others tell us about their Ovidian characters.

In Thebes, temple of Juno, where the celebration of a religious rite is held. Semele, daughter of King Cadmus, is promised to Athamas, Prince of Boeotia, although she secretly loves Jupiter. Trying to delay the marriage, she invokes the gods to help her get out of her predicament. Her sister, Ino, is in love with Athamas and, under the pressure from her father, finally confesses to him. While Athamas ends up also learning of her feelings for him, Cadmus arrives with his retinue and tells of the abduction of Semele by an eagle. The court is saddened but the priests announce to the king that Jupiter's favour has descended on his family. Semele appears from a cloud to reassure them.

Juno, wife of Jupiter, is furious about Semele and tells his sister, Iris, of her wish for revenge. June learned from Iris that Jupiter keeps Semele protected by two dragons. She has the idea to ask the god of Sleep, Somnus, to put these dragons to sleep so that she can exact her revenge.

Semele is asleep in her palace, surrounded by Loves and Zephyrs. Jupiter joins her and declares his love. But she is aware of their fundamental difference between them; that she is mortal, he a deity - a subject that worries Jupiter. He expresses his intention to reunite Semele with her sister, Ino, and to settle them together in Arcadia.

In the Cave of Sleep. Juno and Iris ask Somnus to put to sleep the dragons which protect Semele and her sister, in whose form Junon then appears. The latter flatters Semele and asks her if Jupiter has promised her immortality. She advises her to reject his advances as long as he has not promised to appear to her in his divine form. Juno is aware that Semele would die of Jupiter appear to Semele in his true form.

Semele makes it clear to Jupiter that she will not yield to his advances until she had seen him in his divine form. Jupiter promises to grant her wish but is distraught at the inevitable consequences of such a revelation. Juno rejoices. Semele succumbs to the vision of Jupiter.

Later, Ino recounts what has happened and she and Athamas are betrothed. Apollo declares that a Phoenix will be born from the ashes of Semele, and all rejoice.

5 things to know about Semele

1° A work written at lightning speed

Handel was a virtuoso - as a composer as well as an improviser, organist and harpsichordist. For Semele, he was inspired by the libretto that William Congreve wrote of Ovid's Metamorphoses for the composer John Eccle; a work that was never finally performed. Handel took only a month to write the score, between 3 June and 4 July 1743. He probably collaborated with the writer and librettist Newburgh Hamilton, who helped make adjustments from the original libretto, a task which Congreve had already undertaken for Handel’s opera Samson in 1743.

2° Semele, an opera first presented as an oratorio

After devoting much of his life to composing Italian opera - he wrote about forty of them! - Handel, from the 1740s, turns almost exclusively to writing oratorios. At the time, his oratorios represent his main concert activity in Covent Garden. But whereas the project of Congreve and Eccle was originally intended for the stage, Handel’s Semele, created on 10 February 1744, was designed and presented 'in the manner of an oratorio', i.e. without staging. The oratorios were relatively cheap, compared to operas, and allowed Handel to engage many English singers, while he himself was living in London.

Handel was an immensely popular composer who was successful almost all his life. His Messiah of 1743 was a great success, underlining his primacy as an oratorio composer. This was not quite the case for Semele, whose success was more modest. This may be linked to the fact that the subject matter - love - was not what audience were expecting in the middle of Lent. Semele only had six perfomrances and then fell forgotten for a century and a half. It was restaged in Cambridge only in 1925.

Semele is one of those works that marks a turning point in the composition of Handel, in that it seems to mark a depature from the Italian style of opera. But this is only true in appearance, because in reality, Semele is all but an Italian opera in name. During the first performances, some people already recognised it as Italian opera in the guise of the oratorio and did not appreciate this ‘trickery’! The numerous modifications to the libretto were indeed intended to reintroduce the Haendelian style, which was based on opera seria: such as reinstating of da capo arias, reducing the number of recitatives and adding choruses.

5° A new production at the Komische Oper Berlin

Baroque specialist Konrad Junghänel and director, Barry Kosky, intendant at the Komische, unveil a new production. The role of Semele is sung by Nicole Chevalier, winner of the Prix Faust. English tenor, Allan Clayton is sure to show his prowess as an actor and singer in the role of Jupiter.