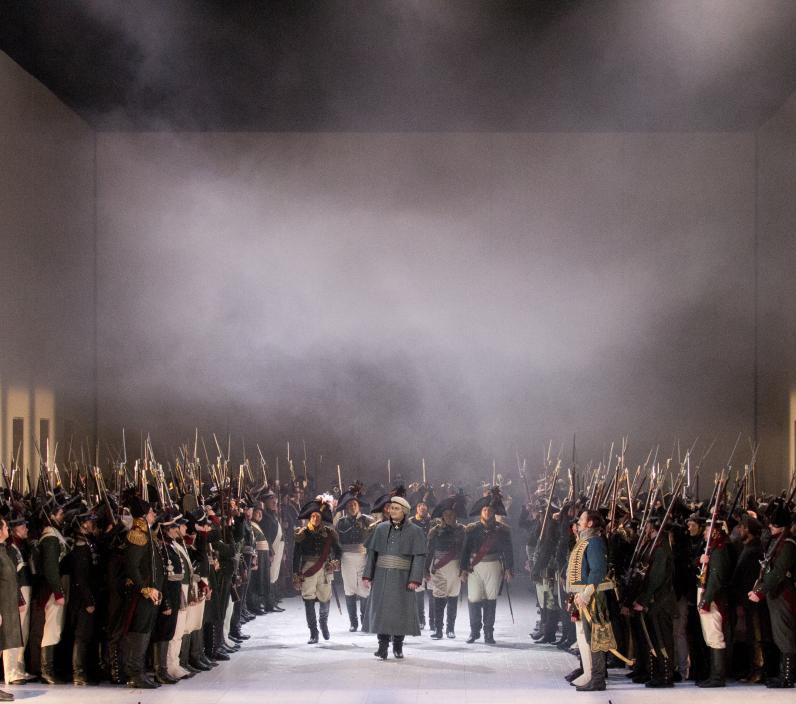 Prokofiev
This performance is no longer viewable as video-on-demand for rights reasons but other material about the production is still available.

As the fates of a spirited young woman, her fiancé and their idealistic friend intertwine during the Napoleonian invasion, their lives - like every Russian’s - are about to change forever.

Based on Leo Tolstoy’s epic novel, Prokofiev’s opera portrays the tribulations of Russian society as Napoleon’s armies edge closer to the country’s borders. Monumental in scale, his production has a cast of over 400 with 70 principal singers and a massive chorus on stage.

On a moonlit night, Prince Andrei Bolkonsky is visiting the Rostovs at their country house. Disillusioned with life, his thoughts are interrupted by the sound of Natasha Rostova and her cousin Sonya, at their bedroom window, revelling in the beauty of the spring night.

Natasha arrives at her first ball. The guests include an unhappy Pierre Bezhukov with his wife Hélène, Hélène’s brother Anatole and his fellow-officer Dolokhov, and Andrei Bolkonsky. Pierre encourages his friend Andrei to dance with Natasha.

Natasha and Andrei are now engaged to be married. Andrei’s father, Prince Nikolai Bolkonsky, considers the match beneath his son and has insisted that he spend a year abroad in the hope that the relationship will falter. Natasha and her father pay a call on the elderly prince, but he refuses to see them. Instead, his daughter Princess Marya receives them with some embarrassment. Suddenly Andrei’s father barges in, wearing his dressing gown, feigning surprise at the sight of visitors. His apologies are laden with sarcasm.

Scene 4 A party at the Bezukhovs’ house

Anatole declares his feelings for Natasha, handing her a love letter. Despite Sonya’s warning, Natasha weakens in her resolve to be faithful to Andrei.

With Dolokhov’s help, Anatole plans his elopement with Natasha that night.

Natasha is staying with Sonya at her godmother’s. She awaits Anatole’s arrival. When Anatole appears, he is met by a servant and makes his escape. Akhrosimova scolds her goddaughter for such unacceptable behaviour. Natasha remains inconsolable until Pierre arrives. Learning what has happened, he reveals that Anatole is already married.

Pierre confronts Anatole, demanding that he return Natasha’s letters, leave Moscow and never mention the affair to anyone. Denisov arrives with the news that Napoleon and his army are crossing into Russia. War is inevitable.

Preparations for the battle with the French are underway. A chance meeting between Andrei, now immersed in the affairs of war, and Denisov, who had himself once hoped to marry Natasha, provokes in Andrei fond if bitter memories of Natasha. Pierre, still a civilian, has come to observe the battle. Russian army parades before Field Marshal Kutuzov.

Scene 9 The Shevardino redoubt during the Battle of Borodino

Napoleon and his generals watch the battle’s progress. He is puzzled at his inability to secure the rapid victory that has been the hallmark of his earlier campaigns.

Kutuzov and his generals debate whether the city should be surrendered in order to save the army and the country. Kutuzov decides to abandon Moscow to the French.

Moscow, now under French occupation, has been abandoned by the army, the aristocracy and most of its citizens; the French army is looting deserted houses. Pierre has remained behind, intent on assassinating Napoleon. He meets the Rostovs’ housekeeper and maid, who have news of Natasha and her family. People of Moscow start setting fire to the city, and Pierre is arrested on suspicion of arson. He is reprieved from the firing squad at the last moment and befriends Karataev, a fellow prisoner.

Scene 12 A village outside Moscow

The Rostovs have helped evacuate many wounded soldiers from Moscow, among them Andrei. Natasha goes to find him in the middle of the night. Andrei, delirious with pain, forgives her everything and together they imagine the life they might have enjoyed.

The French army, which has abandoned Moscow, retreats. Among the prisoners are Pierre and Karataev. Exhausted by the march, the latter is shot when he can no longer keep up. Pierre and the other prisoners are liberated by a partisan group under the command of Denisov and Dolokhov. Field Marshal Kutuzov arrives and everyone celebrates victory.

Tolstoy’s War and Peace, arguably the greatest novel in any language, defies improvement. Yet it has been transformed into film, television adaptation… and opera. How could Prokofiev dare to attempt such an impossible task?

The brilliant, iconoclastic composer of the early years of the Russian revolution had to migrate to the West in order to realise his early operas: the compulsive Gambler based on Dostoyevsky; and the fantastic comic fable Love for three Oranges after Gozzi. The opera he regarded as his masterpiece Fiery Angel never reached the stage in his lifetime. Frustration at that failure may have part- caused his return to his homeland in the 1930s. Soviet citizenship required submission to cultural censorship, but Prokofiev had outgrown his rebellious youth and became increasingly orientated towards a Russian ‘classical heritage’, composing the score for Eisenstein’s epic films about Ivan the Terrible.

Prokofiev’s first, though unfulfilled, Tolstoy project was Resurrection, but, according to Mira Mendelson who was to become his second wife, it was her reading aloud to him War and Peace, in particular the episode in which Natasha Rostova visits the dying Andrey Bolkonsky in the field hospital, which ignited his creative fire. That became the penultimate scene from an initial list of 11 scenes which he chose to set. Surprisingly, two of the most famous scenes in the final version were absent from the first sketch: the ball at which Natasha is introduced to Andrey, with its irresistible waltz reminiscent of Prokofiev’s great ballet scores; and the Council at Fili with its magnificent aria for General Kutuzov, the leader of the Russian army against Napoleon.

The latter insertion, urged by the conductor Samuil Samosud and adapted from a folk-epic melody composed for Ivan the Terrible, betrays the pressure exerted on Prokofiev to enhance the patriotic nature of the War part of the opera at a time when Russia was immersed in another Great Patriotic War during the 1940s. It would be easy to accuse Prokofiev of succumbing to political blackmail to make Kutuzov’s heroism in 1812 a synonym for Stalin’s courageous leadership 130 years later; but, in a fine performance such as that given by Stanislavsky Music Theatre, it is impossible to resist the sincerity and fervour of the Russian defiance in defence of their land, especially when the stage is filled with 300 or more committed performers!

What may at first seem a crude division into 7 scenes of Peace in Part 1 and 6 scenes of War in Part 2 reveals itself in performance as a much more subtle distillation of the central threads of Tolstoy’s epic novel. Inevitably, Tolstoy’s minutely observed detail and profound philosophy are diminished, but it is remarkable how much is retained. The contrast of the old-fashioned Russian aristocratic Rostov household in Scene 3 with the worldly French ambience of Hélène Bezukhov’s salon in Scene 4 of Part 1 prefigures the contrasts between the Russian and French army encampments in Part 2. The shadow of impending war hangs over Part 1 and the news of Napoleon’s invasion provides a stunning curtain to the act. The journey towards enlightenment of the peace-loving intellectual Pierre Bezukhov becomes the philosophical thread which holds together the depiction of war in Part 2. Pierre’s unlikely friendship with the destitute peasant Platon Karatayev on the road to Smolensk becomes the counterpart to the reunion of Natasha with the dying Andrey.

Andrey’s lyrical outpouring beneath the peaceful night sky of the opera’s first scene is a gift to baritones, but it is Natasha who dominates Part 1. Her fresh innocence with her sister Sonya is established from the opening; the enchantment of her first ball, where her shyness melts into the burgeoning of love; her susceptibility to Anatol Kuragin’s seductive flattery; her humiliation at the Bolkonsky household; and still more the yearning sense that she has lost her youth and all that is dearest to her; the long lines of melody which express her conflicting emotions make this role one the most beloved in the soprano’s repertory, comparable to Tatyana in Onegin.

The fates of Andrey and Natasha become subsidiary to the war effort in Part 2. One marvels instead at the skill with which Prokofiev draws the growing irritation of the cold Napoleon; the different characters of the Russian generals sketched in only a few lines; the devastation of Moscow in flames; the bitter winter of the great retreat. The model is Musorgsky, with his juxtaposition of contrasting scenes. Yet, when you listen to the hauntingly insistent Tolstoyan ‘pi-ti-pi-ti-pi-ti’ of the off-stage chorus, while Natasha begs forgiveness of the dying Andrey, you recognise the unique voice of Prokofiev.