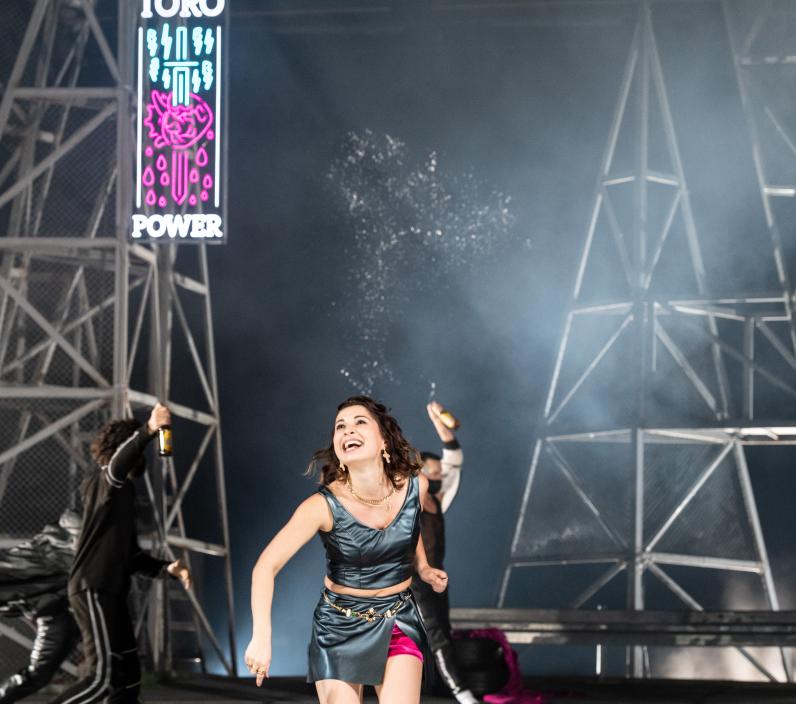 Carmen, a world of its own

Martin Mutschler, Dramaturg: You have often mentioned that Carmen is 'a world' for you. What do you mean by that?

Barbora Horáková, Stage Director: I mean that the figure of Carmen can only be fed by her own deepest emotions, by personal experiences. There is no formula for embodying the character, for a singer it is a great challenge. As a director, I can show up paths, but the singer has to feel them.

Martin Mutschler: Almost in contradiction to this, the figure of Carmen seems to me at first like a blank space in the piece that is difficult to define. Similar to Mozart's Don Giovanni, she seems to be more a principle than a living character. This may also have something to do with the history of the opera's reception, which has turned Carmen into a vamp, a femme fatale. How do you fill the above-mentioned blank?

Barbora Horáková: I like the word principle: for me, Carmen is like a wave, whose shape you can guess, whose balance of power you can see, but whose nature you cannot predict - how salty or dangerous the water really is, whether it is cold or warm, you have to find out together.

Martin Mutschler: You allude to the natural force of the figure ...

Barbora Horáková: In the times of Bizet, Carmen stood for something that people were afraid of. Today, other things frighten us: that we no longer know what freedom is and where our own limits lie. I often have to think about the central question in Dostoyevsky's Brothers Karamazov: Is there still morality in a world where one can no longer believe in God? Where there are no more external barriers, the fear that would prevent you from crossing borders disappears.

Martin Mutschler: But this freedom is not an external risk, but a fear of what is inside oneself. What is Carmen afraid of?

Barbora Horáková: Maybe she is afraid of falling in love because she fears losing her love in the bond. But I believe that the character's spectrum is larger, and that has something to do with our reading: We exceed certain ideas that are commonly held about Carmen by showing a young, lively woman who is also struggling with the impossibility of social advancement. 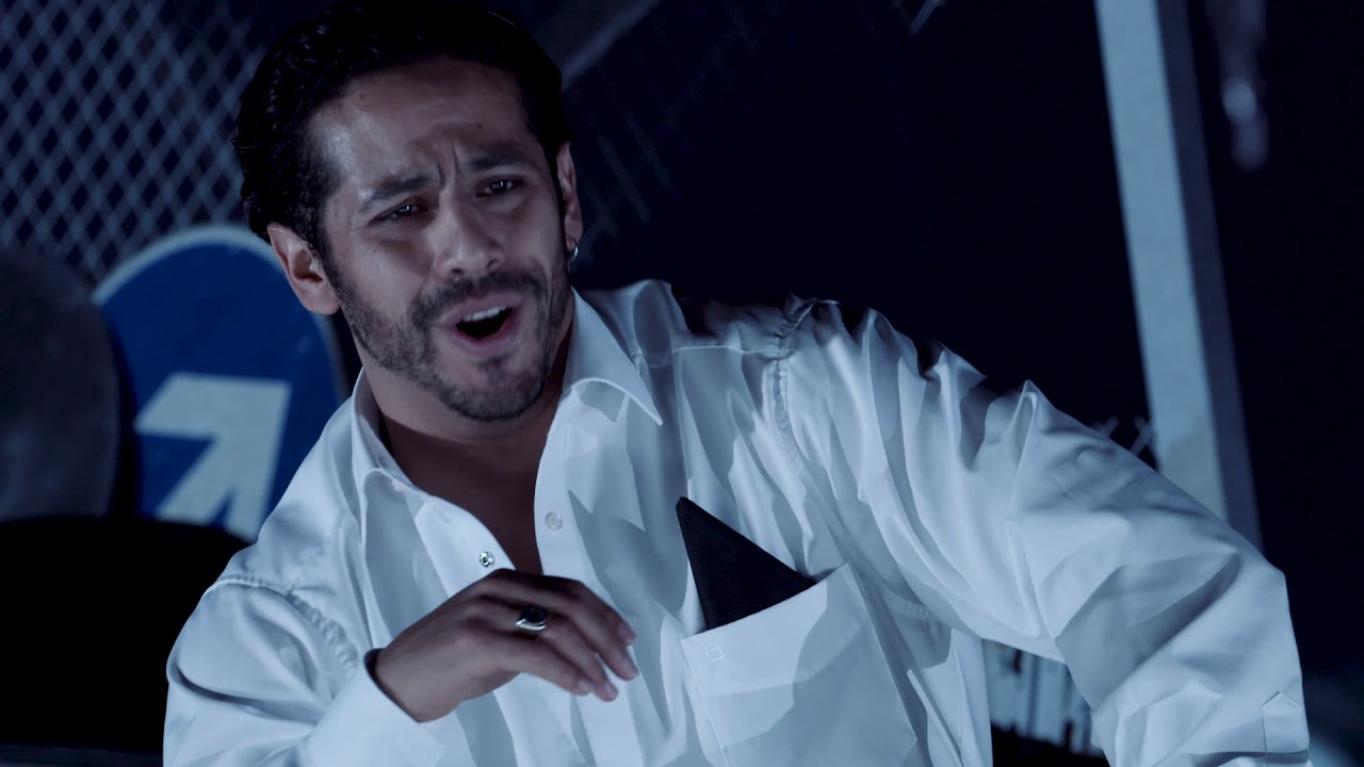 Martin Mutschler: Our production takes place - to quote Bruce Springsteen - in the 'darkness at the edge of town': it is about boundaries between social milieus, but also about places where our post-industrial civilization is fraying. The stage design shows parts of an abandoned stadium that was once part of a megalomaniacal representational architecture but is now only a ruin that bears witness to the failure of a long-gone future. Through the "darkness" in which things happen that 'downtown' only dreams about, this place also has the potential to function according to different laws than the illuminated centre of society. Where does your inspiration for this milieu come from?

Barbora Horáková: I have always found abandoned stadiums fascinating: how they are given new life by the people who simply appropriate them. On the other hand, I was also inspired by those intermediate places that you sometimes see in photos from war zones: Soldiers stationed in Syria play football between the ruins with the children of the locals. A child and a soldier playing ball together: it suddenly gives a very warm feeling to the bare, destroyed places. Another inspiration was the Spanish singer Rosalía. She grew up on the outskirts of Barcelona in a slab ¬ built not far from a Seat¬ and Chupa Chups¬ factory. In interviews, she describes what it meant for the teenagers to transform these places into a big shadow play at night. Playing to live, to survive - that is where dance comes into play. Rosalía discovered a very old tradition for herself in flamenco and was able to transform it into something new and trendy.

Martin Mutschler: Pop culture uses this industrial dress-up and gives it its very own glamour in a crazy act of social empowerment. This can also be seen in Rosalía's videos, where car parks and port facilities are suddenly transformed into stages - and in the process, common visual worlds are undermined by a novel combination of symbols. I see parallels to the lusty contrast that already exists in Bizet's Carmen: Drama, lust and play are already seamlessly juxtaposed in the genre of the Opéra comique, differences simply are not levelled out. This brings Bizet much closer to the reality of people's lives, for what is realism if not the harsh simultaneity of irreconcilable worlds?

Barbora Horáková: Take Carmen's 'Chanson bohémienne': here you can feel an incredible lightness and freedom under which danger lurks - and both lightness and freedom are extreme. I think that's why Carmen is so popular: the melodies are not only not so well known because they are beautiful. The 'Habanera' is also a song of seduction and at the same time tells of the danger of love, where you can also burn yourself.

Martin Mutschler: The additional dancers have given us the opportunity to replace the missing choir on stage with a smaller collective. These dancers now perform as a chorus themselves, as corps de ballet - and give the audience a real show.

Barbora Horáková: It was important to me that our arrangement does not become a kaleidoscope of snapshots, but a story with beginning and end. Bizet's Carmen begins as an operetta and ends as a drama - so the piece must also show Carmen's passion for dance. After all, life itself is a constant show - we film ourselves, want to show ourselves beautifully and feel alive.

Martin Mutschler: Throughout the play, José seems to say to Carmen: 'Tell me how to live!' Because she knows, and he could learn from her. But he destroys his chance of living by killing her. She owes him the answer because it is too late: he has destroyed everything. All we hear is her breathing. At the same time, however, her breathing is also an answer to his question, because it means: "Here, in the moment, one lives with every breath.“

Barbora Horáková: Don José is actually too late with everything because he is hanging on to his past. He cannot look ahead. Carmen's tragedy, on the other hand, is that she is afraid to look both backwards and forwards; her refuge is to live only in the moment. What would a future look like for her? One cannot live from day to day. Again, it is all a question of balance. Living is unpredictable. How do we deal with it?