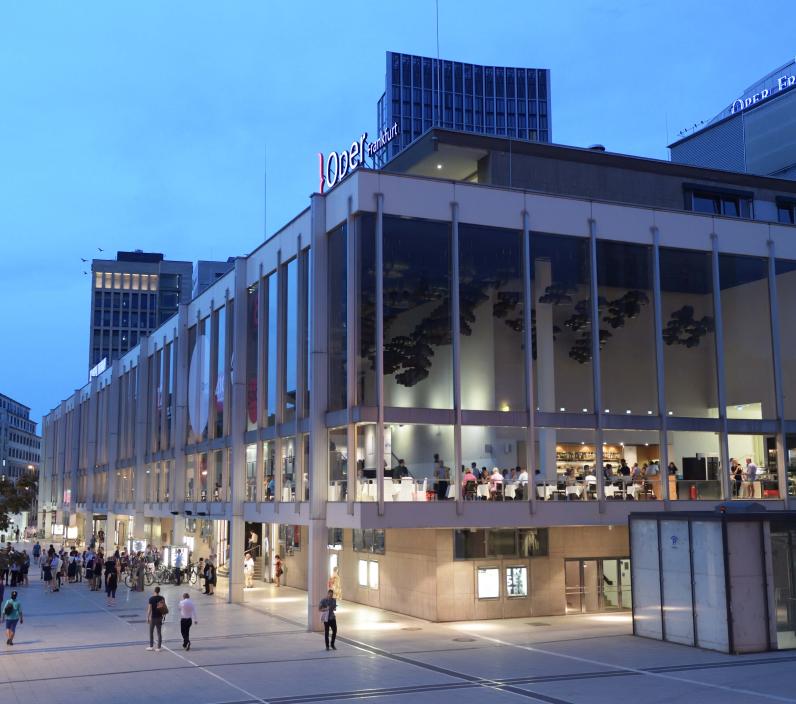 Oper Frankfurt is one of the most important and renowned theatres in the world. Bernd Loebe, Intendant since 2002, incorporates rarely performed works, world premieres, exciting directors and up-and-coming talent when planning his seasons, which have been acknowledged by being voted „Opera House of the Year“ five times by critics from the specialist magazine Opernwelt. An important artistic partner since 2008 has been General Music Director Sebastian Weigle, who will be succeeded by Thomas Guggeis in 2023. 11 new productions and 15 revivals are performed in the Opera House (1370 seats) and Bockenheimer Depot (350 seats) per season.

Many artists, including Paula Murrihy, Iurii Samoilov and Franciso Brito started their careers as members of Oper Frankfurt’s Opera Studio. Since this institution was founded in 2008 it has given eight young singers a year the chance to start their careers off. They gain experience by working with more established singers in rehearsals and productions, and internationally renowned teachers, one-to-one and in masterclasses, including Brigitte Fassbaender, Hedwig Fassbender, Edith Wiens and Neil Shicoff, and the accompanist Helmut Deutsch. 18 young artists have already left the Studio to join the Ensemble at Oper Frankfurt.

Members of the Frankfurt Opern- und Museumsorchester were serious about wanting to give younger musicians the chance to develop further and gain insight into what working in an opera and concert orchestra means, and filling the gap between studying and embarking on a career. So the Paul-Hindemith-Orchester Akademie came into being in 2015/16. Ten scholarships are now awarded each season (five string players and five woodwind/brass players). They receive individual tuition from members of the orchestra, take part in workshops on how careers can be developed, learn more about auditioning, receive mental training and play in the orchestra during operas and concerts, giving them optimal conditions for preparing to start earning a living.

Now OperaVision is giving the nourishment of young talent an important showcase. Oper Frankfurt is delighted to be taking part in this pilot project with the Opera Studio and Paul-Hindemith-Orchester Akademie.

The creative team of Christmas Eve