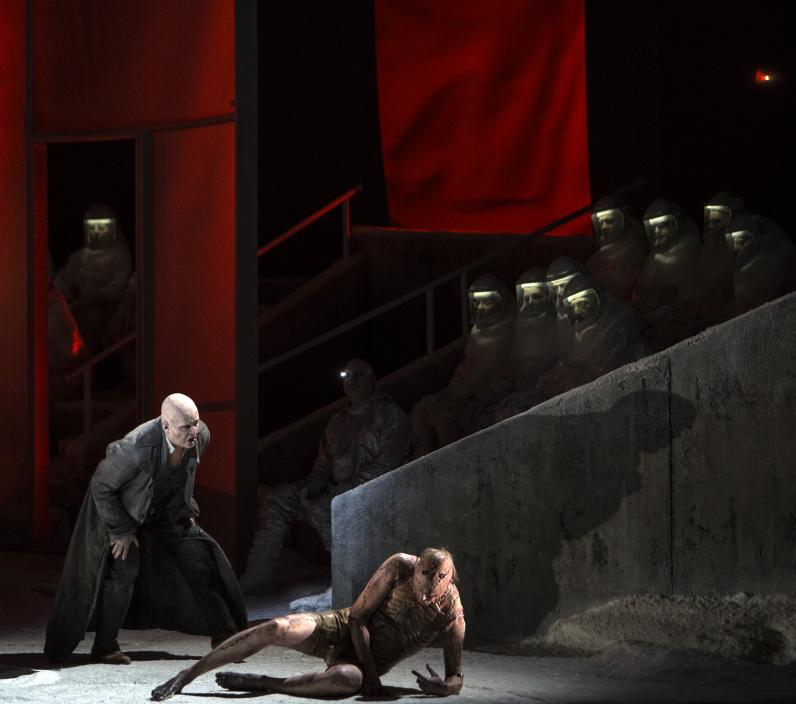 An interview with Scott Hendricks

'We could tell they didn't know how to react!'

Scott Hendricks plays the title role of the obsessive scientist in Frankenstein, a new opera by composer Mark Grey. A few days before it was streamed live on OperaVision from La Monnaie / De Munt, we sat down with the Texan baritone in a Brussels café to discuss his latest work.

OperaVision: Welcome to Brussels. Or rather, welcome back, because you’ve been here a number of times. You’ve performed at La Monnaie / De Munt in Macbeth, Salome, Il trovatore, La traviata, Un ballo in maschera, Sweeney Todd, Pagliacci, La Gioconda and now Frankenstein. This place must be like a second home to you.

Scott Hendricks: It is definitely a second home. It feels like home. I’ve actually spent more time in Brussels then I've spent at home in San Antonio over the past ten years.

SH: Yes, it’s for baritone, choir and orchestra, and he wrote the baritone part specifically for me as well. It was mostly in English but had a sentence here and there in the Navajo language. It’s absolutely beautiful, and the story’s great, and it’s very relevant. When a soldier comes back home and tries to re-assimilate back into everyday life, it’s difficult, and the Navajo have this cleansing ceremony for it. It’s just beautiful. We want to turn Enemy Slayer into an opera. I can’t tell you how many people I’ve talked to about this but unfortunately there hasn’t been any interest. But I’m not going to give up, I still think someone should commission Mark to write an opera based on it. I think it would go down very, very well.

OV: Hopefully after the success of Frankenstein people will see the potential in him as a composer of full-length operas.

SH: I think people already are.

Scott Hendricks
'Generally speaking I avoid reading reviews but this time I’ve got people sending me reviews left and right. The press has been very positive.'

OV: Friday night saw the premiere of Frankenstein. How did it go?

SH: It was great! It was great. I’m not big on opening nights; I don’t believe in ‘opening night magic’. It’s kind of nerve-racking, really, because the corridor is filled with people and folks are knocking on your door. But even though we were very focused, we were pretty relaxed. I thought it was a great show. Generally speaking I avoid reading reviews but this time I’ve got people sending me reviews left and right. The press has been very positive.

OV: One of the most dramatic moments in the opera is at the end of Act I, when you see Justine Moritz hanged at the end of a trial. That’s not something you see depicted on stage every day.

SH: And the audience’s reaction is: ‘What just happened?!’ We could tell they didn’t know how to react! Actually, my estate agent from San Antonio comes to Europe once a year, and she came to the opening night. She says she was up till 2 a.m. after the show thinking about the hanging, thinking about the scene where I’m cutting up the bodies. You don’t really get this type of show in the States, unfortunately. She loved it, but she was taken aback. It makes you think.

OV: In that court scene, is Victor Frankenstein trying to protect himself or the creature?

SH: Himself. He knows it could be discovered that he created this thing, and that it’s now committing horrible crimes, so he has to stay silent. No one must find out. It’s a very, very sad scene.

OV: Another sad scene is your final appearance in the opera where you’re lamenting the death of your wife on your wedding night. In contemporary opera you don’t really have the recitative and aria structure of more classical works, but what you sing in this scene is the most aria-like piece in Frankenstein. How much did Mark Grey involve you in the process of writing it?

SH: Mark and I were in touch for years about the part of Victor, about the tessitura, the range. He and his wife live 45 minutes north of San Francisco. I flew out there back in 2015 and we met over the course of three days. I gave him some ideas, he gave me some snippets here and there about what he was working on. We both work with Sibelius, the notation programme, so he would send some files over and I would check them out. He was doing that with all the soloists, if I’m not mistaken. So the parts were tailor-made for each of us. Dr Walton was tailor-made for Andrew Schroeder, as was Elizabeth for Eleonore Marguerre, as was Victor for me. It’s wonderful when something fits like a glove, and this certainly does. Mark welcomed feedback from all of us. He’s a very generous man. He just wants us to feel as comfortable as possible, and he went out of his way to make sure that we did. 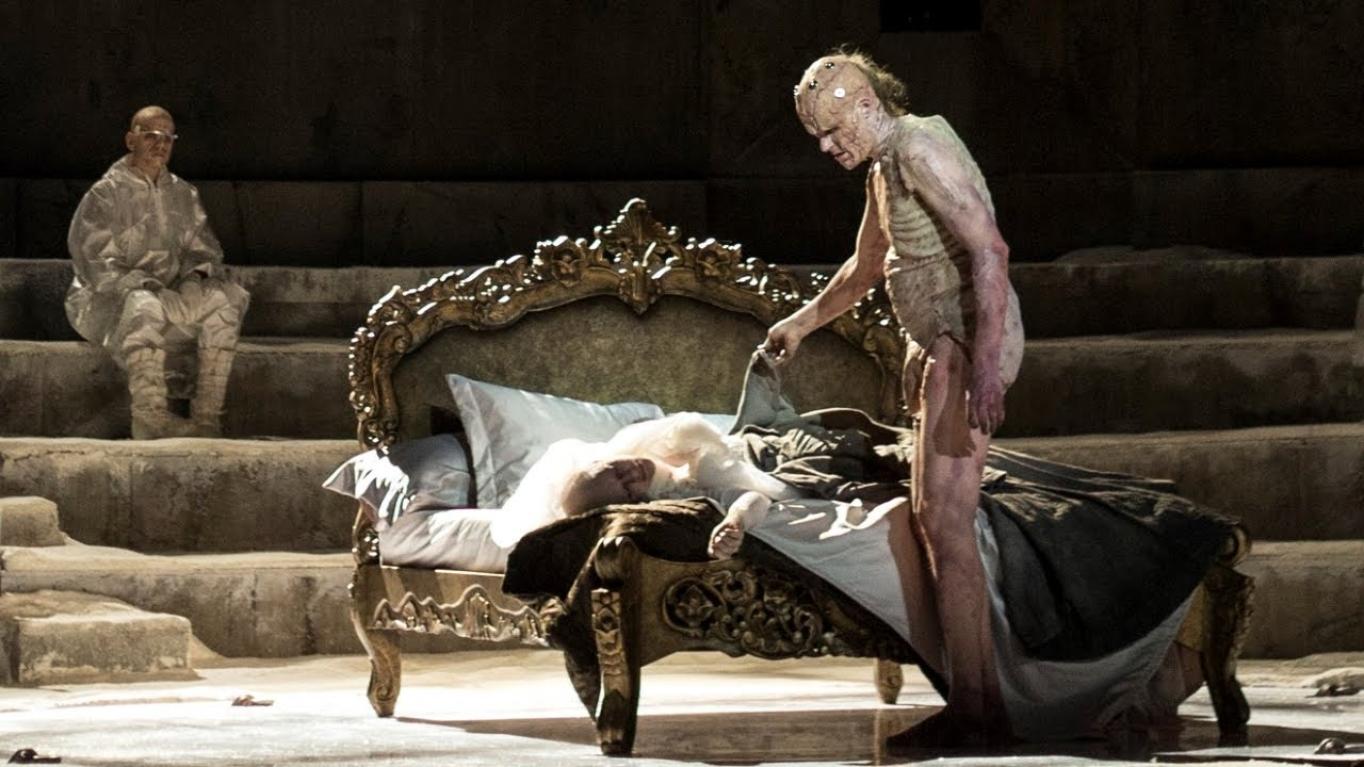 OV: Mark Grey is not just a composer; he’s also a sound designer, and in Frankenstein he’s incorporated electronic sounds into the orchestration.

SH: The electronics enhance the piece. They certainly don’t dominate. They add something quite special. I’ve done many operas that have incorporated electronics, sound design, keyboard patches and so on.

OV: After Frankenstein you’ll be heading to the Komische Oper Berlin to star in another new opera, M – A City searches for a Murderer by Moritz Eggert. Then you’ll be playing Rigoletto at the Bregenzer Festspiele. How you do deal with your workload as a professional opera singer?

SH: I’ve never had to balance and organise my time as much as I have over the last couple of months. It’s been very challenging. Once I feel comfortable with M I’ll be able to kick back and put my feet up for a bit, because I’ve done Rigoletto before. I’ll have to relearn it but by then I’ll be in good shape mentally, physically, spiritually, because right now it’s challenging. But I love a challenge, it’s great!

OV: M will be directed by Barry Kosky and conducted by Ainārs Rubiķis. They’ve each appeared recently on OperaVision: Barry with his new production of La bohème; and Ainārs when he conducted Die tote Stadt. Have you worked with either of them before?

SH: Barry and I worked together on La Fanciulla del West at Opernhaus Zürich in 2014. We got on very, very well. That’s how M came about. I love him, he’s a great guy. I think we’re going to have a great time in Berlin.

OV: Then after that, Rigoletto in Bregenz on the spectacular floating stage. You’ve performed there before in Carmen…

SH: …and in Il trovatore, Tosca and André Chénier. This will be my fifth production on the floating stage. I love that venue. It’s very, very special. I love the wind and rain, the bugs crawling up your sleeves while you’re singing and the gnats flying into your mouth as you’re singing a high note. I just absolutely love it. You get to run around, jump into the lake, and climb this and that. You have to be in pretty good shape. It’s challenging but it’s so much fun. The amphitheatre seats 7,000 people and so you feel the energy from the audience. There’s great energy there anyway because Bregenz is a special place. I adore it.

Scott Hendricks
'Verdi is my favourite opera composer, period. And what he’s done with Shakespeare is nothing short of amazing.'

OV: At the end of March, OperaVision will be showing Falstaff from Garsington Opera. As someone who has recently played Iago in Otello at New Zealand Opera and the title role in Macbeth here at La Monnaie / De Munt, what do you think of Verdi’s interpretation of Shakespeare?

SH: I’ve also performed in Falstaff three times. I play Ford, and as far as temperament is concerned and which character I relate to most, I would still choose Ford over John Falstaff. I’m not quite ready for him. But when it comes to Verdi and Shakespeare, I think it’s obvious that it’s one genius adapting another genius. Verdi is a theatre animal. His love for Shakespeare is obvious, and we get that in all of his works that he adapted. You never know how a composer is going to adapt a story, because they’re interpreting it as they’re writing the opera. And then we singers are forced to perform their interpretation. But Verdi always get it right, and he does it in a way that’s somehow flexible for the performers. You can realise it in so many different ways without betraying his intentions. Verdi is my favourite opera composer, period. And what he’s done with Shakespeare is nothing short of amazing.

The full performance of Frankenstein is available on OperaVision until 14 September 2019.