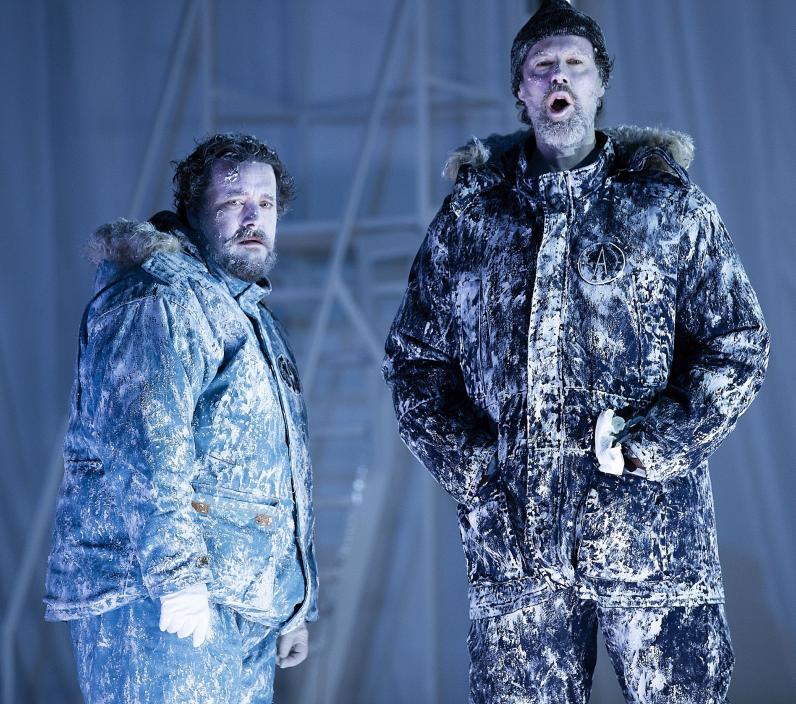 MacRae
This performance is no longer viewable as video-on-demand for rights reasons but other material about the production is still available.
Anthropocene

A team of scientists becomes trapped in the frozen Arctic wastelands. Tensions rise and relationships crumble, and then something appears, out of the ice.

This fourth collaboration between composer Stuart MacRae and librettist Louise Welsh is their most ambitious to date. With unrelenting drama and superb storytelling, Anthropocene engages with the crucial issues of our time – climate change, sacrifice and our ceaseless quest for knowledge.

The ice-woman is sleeping

Miles (Benedict Nelson), a journalist aboard the stranded research ship King's Anthropocene, has removed a component from the vessel's communications system to keep the crew trapped in the Arctic - a front page story! He finds Vasco (Anthony Gregory), the ship’s engineer, on deck trying to repair the communications system. They start fighting, and the vital component that Miles removed falls from his pocket. Vasco realises what Miles has done. In panic, Miles grabs a spanner and strikes Vasco on the head, killing him, before dragging his body off the ship.

The research ship King's Anthropocene is moored in northern Greenland. The expedition team have brought a large block of ice aboard and are amazed to see a body trapped within it. When Daisy (Sarah Champion) begins photographing the body inside the ice, she sees an eye move. Vasco (Anthony Gregory) takes an axe and smashes open the block, freeing a young woman, Ice (Jennifer France).

What's the biggest idea you've had over a bowl of soup? For librettist Louise Welsh and composer Stuart MacRae, it was Anthropocene. In this video, hear them talk about the exciting and nerve-wracking process of writing their ambitious new opera.

The research ship King’s Anthropocene is moored in northern Greenland. It is the end of the Arctic summer. Wealthy entrepreneur Harry King has financed a scientific expedition to collect samples from the ancient ice, which he hopes will reveal the origins of life.

With him on the ship are Professor Prentice, the expedition’s leader, alongside her husband Charles, both of them scientists. The crew comprises Captain Ross and Vasco, the ship’s engineer. They are joined by Harry King’s daughter Daisy, an amateur photographer documenting the voyage, and Miles, a journalist Harry has commissioned to report on the expedition’s triumphs.

While Charles, Daisy and Miles are away from the ship collecting samples, the temperature falls rapidly, the sea freezes, and the ship is in danger of becoming trapped in the ice. Prentice is determined to wait for those still away from the vessel but finally relents, even though it means abandoning her husband, and orders the Captain to cast off.

It is too late: the ship is trapped. Daisy, Miles and Charles return, bringing aboard a large block of ice. The rest of the expedition are amazed to see a body trapped within the ice block. When Daisy begins photographing the body inside the ice, she sees an eye move. Vasco takes an axe and smashes open the block. A young woman, Ice, is freed – alive.

The next morning, Miles uses the satellite phone to speak to his editor, explaining the extraordinary discovery – the story of the century! In the sick bay, Prentice, Charles and Harry King examine Ice and try to communicate with her. Slowly, Ice starts to speak. Miles’ editor wants him to keep high-profile tycoon Harry King trapped in the Arctic – in itself a front-page story. Miles agrees, and disables the communications system by removing a component. Ice escapes from the sick bay and runs into Miles on deck just as he is removing the component.

Later, Miles finds Vasco on deck as he tries to repair the communications system. They start fighting, and the vital communication component that Miles removed falls from his pocket. Vasco realises what Miles has done. In panic, Miles grabs a spanner and strikes Vasco on the head, killing him. He drags Vasco’s body off the ship.

Weeks have passed. It is the Arctic winter. Ice tells everyone that only blood will warm the water. Daisy believes she saw Vasco far away across the ice. Miles is alarmed that Vasco may not be dead, but Charles dismisses Daisy’s apparent sighting as an illusion.

Alone on deck, Miles decides it is time to call for rescue, since they are suffering too much. He is about to replace the missing component, but decides he will first pretend to have found it where Vasco supposedly dropped it. He will be seen as the hero, and save the day.

Prentice is haunted by her decision to wait for the expedition members out on the ice before leaving, meaning the ship became trapped. She tells her husband that she should have abandoned him, even though she loves him. Charles reminds her that the discovery of Ice will make them as famous as Newton, Darwin or Curie. Prentice fears that they will all die in the Arctic, and that nobody will hear their story.

A violent tempest breaks and King’s Anthropocene is crushed. Captain Ross suspects that Miles killed Vasco, but Miles denies the accusation, blaming Ice and claiming her presence will kill them all. Captain Ross turns on Ice, but Daisy defends her, saying it was they themselves who disturbed Ice by breaking her free.

Ice reveals her story. Her people had become isolated, their land increasingly frozen as the ice advanced. Her own family sacrificed her. Her blood melted the ice, made the water flow and freed her people. By taking her from the ice, the incomers have undone the original sacrifice. She tells them that another sacrifice must be made to set them free.

Miles produces the missing component, declaring that they are all saved since rescue can be summoned. Harry King is ecstatic, but as he grabs the component he drops it, and it shatters into pieces.

Their hopes are smashed. Miles confesses that he killed Vasco, but claims it was an accident. Prentice believes she must act to save everyone where she failed to act before, and so kills Miles. Ice is horrified by the savagery of their actions, pleading that a true sacrifice should not be like this. She leaves them, returning to the icy landscape.

The ice melts and the water flows. Rescuers are heard approaching.

When composer Stuart MacRae and librettist Louise Welsh first began discussing their new opera, the narrative element came before the location. ‘We didn’t know where it would take place,’ explains MacRae, ‘but we knew our characters would somehow be confined together, and their relationships would start to break down.’ They talked about it being in a building or a cruise ship. Welsh brought in the idea of an outsider, a figure that would come into the group and be the catalyst for disruption, which made MacRae think of Ridley Scott’s Alien and Danny Boyle’s Sunshine. ‘I was interested in sci-fi films where the characters are confined in a spacecraft,’ he remembers, ‘the idea of isolating people where arguably there should be no people.’ For Welsh, two older texts were points of inspiration: Shelley’s Frankenstein – particularly the ending where the Creature is left alone in the land of ice – and Shakespeare’s The Tempest. 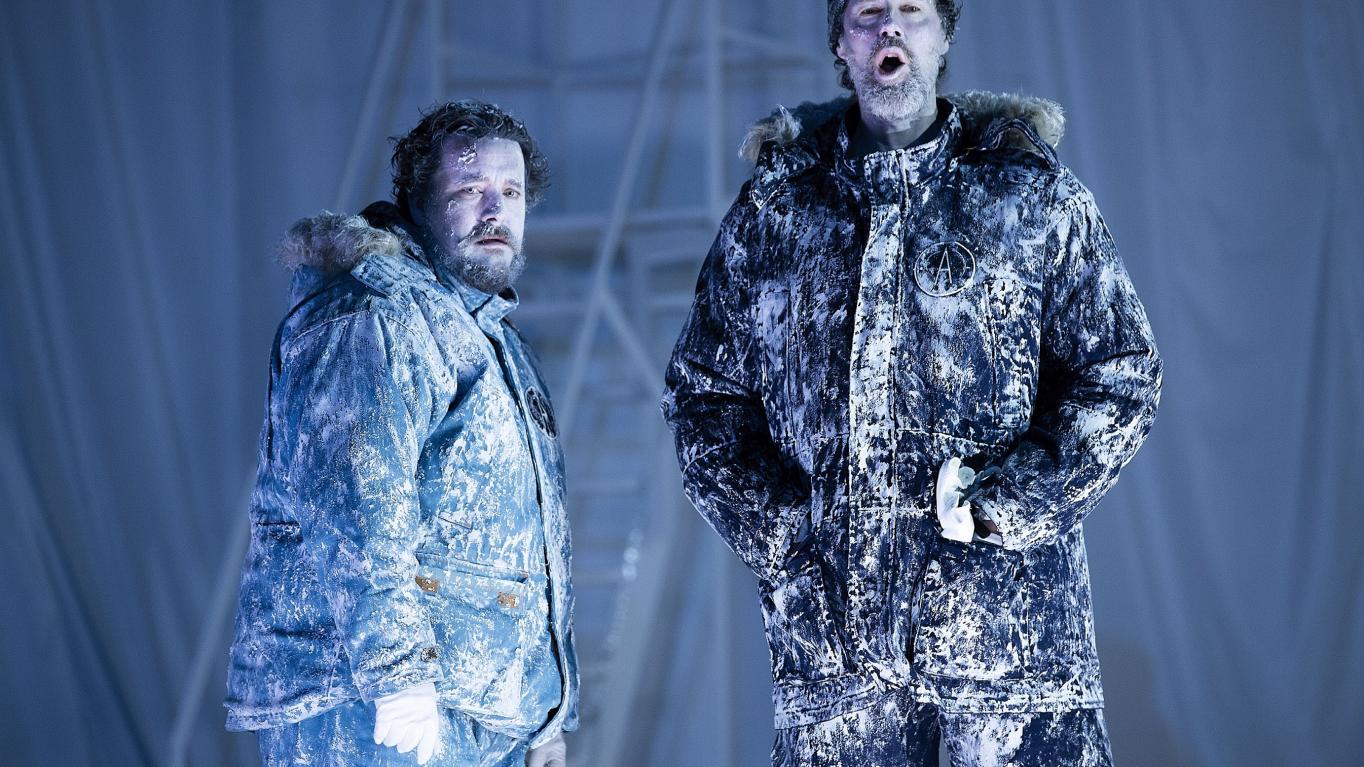 A film that exerted a particular influence, however, was the 2013 Danish documentary Expedition to the End of the World. It is about a group of people – scientists, an artist, a philosopher, a historian, an anthropologist – who voyaged on a sailing boat to explore fjords in Greenland that had been locked in ice for millennia, but were now navigable because of the changing climate. ‘That idea of a cast of characters with different reasons for being there, and who each look at their situation differently, fed into the narrative of Anthropocene,’ says MacRae. The icy environment also seemed like the perfect setting for an opera with all the tension of a thriller. ‘Lots of people have hallucinations on the ice, they see things that aren’t there,’ explains Welsh. ‘It’s just such an interesting landscape, and one that’s made very dangerous by its extremes of weather. It’s a landscape that invites myths.’

With their setting decided, the next step for the librettist and composer was to generate their characters. And here, there were practical as well as narrative concerns. ‘When you think about who would be on a research vessel in the Arctic,’ says Welsh, ‘obviously there’s going to be a captain and crew – although our crew is much reduced – and the scientists. We thought it would be interesting to bring in the financial backer of the operation, too.’ With eight singers, Anthropocene is the largest opera cast that the pair have created. And within that cast, they intended to to provide strong, independent roles for women. ‘We thought: let’s level the playing field,’ explains MacRae. ‘The idea of a main female character in opera being a victim has been done so much. We wanted to look at the work as existing in the modern world, where we’re not just focusing on the adventures of men, with women as side characters.’ 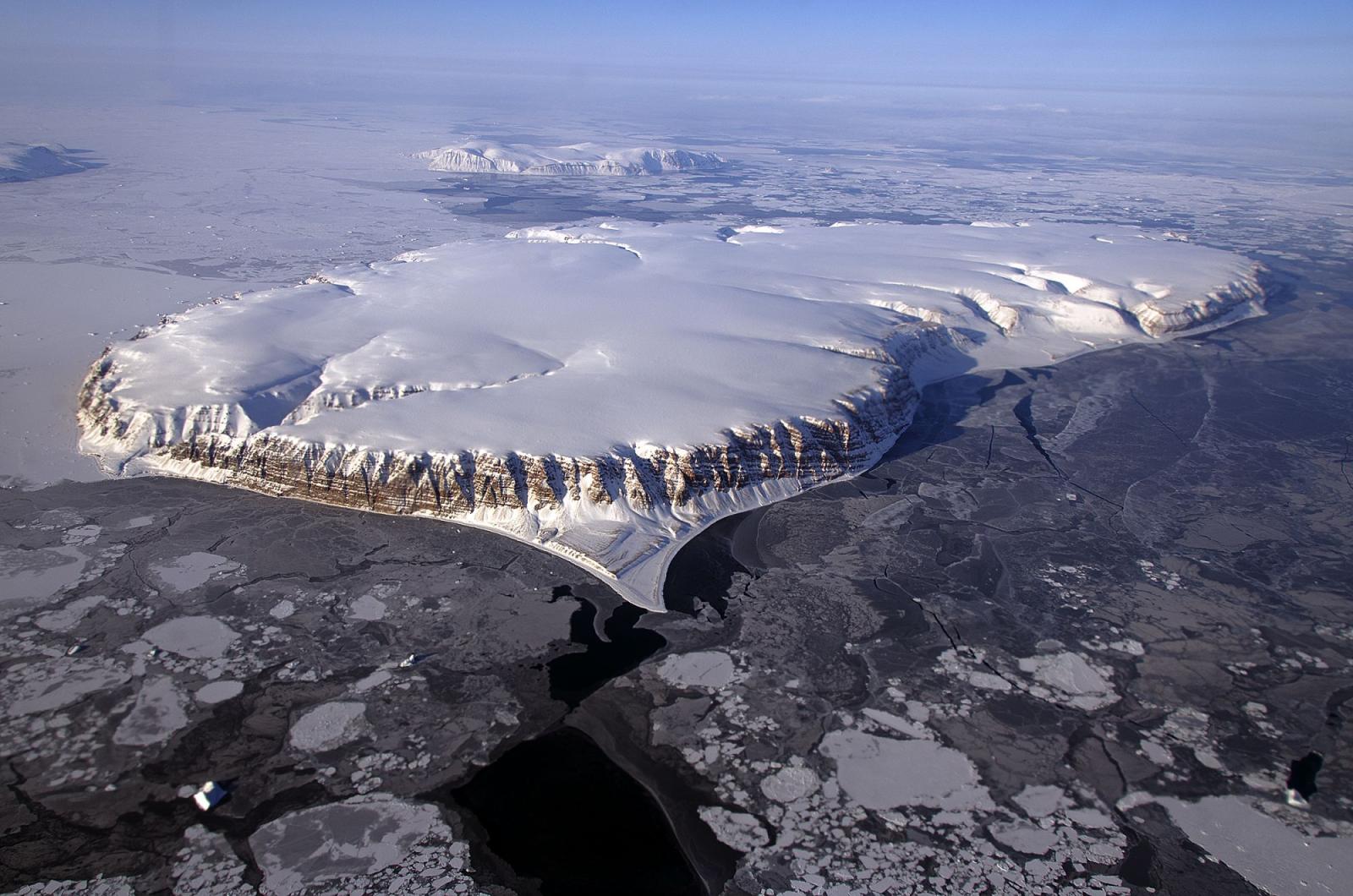 Despite its traces of magic and mystery, Anthropocene is very much an opera of our own times, and a work that refuses to ignore an issue that is profoundly affecting the Poles: climate change. ‘Humankind’s relationship with nature and climate change are part of the setting for the story,’ says MacRae. ‘Because it’s set in the Arctic, which we know is at the forefront of the impact of climate change, it’s impossible to ignore that.’ The opera’s title makes this explicit: ‘Anthropocene’ is a term that has been suggested for our current epoch in which human activity is having a significant effect on the Earth’s geology and ecosystems. In MacRae and Welsh’s opera, the entrepreneur funding the expedition, Harry King, has co-opted the term as the name for his state-of-the-art research vessel, a supposedly indestructible ship itself falls prey to unpredictable changes in the weather.

Climate change aside, an underlying theme of Anthropocene is sacrifice. It plays out on different levels across the work, most clearly as an offering made to unseen forces to bring good fortune, but also in the subtler sense of willingly giving something up for the greater good. Welsh and MacRae also point to exploration – and ethical questions behind it – as an idea that informed the opera. ‘If we had enough money, we ourselves could go on one of these Arctic exploration trips,’ Welsh points out. But whether we should undertake these journeys, and disturb what we find there, is another question entirely. ‘The opera happens at the very top of the world,’ says MacRae, ‘where arguably there should be no people. People have never lived there, and perhaps we should leave it alone.’