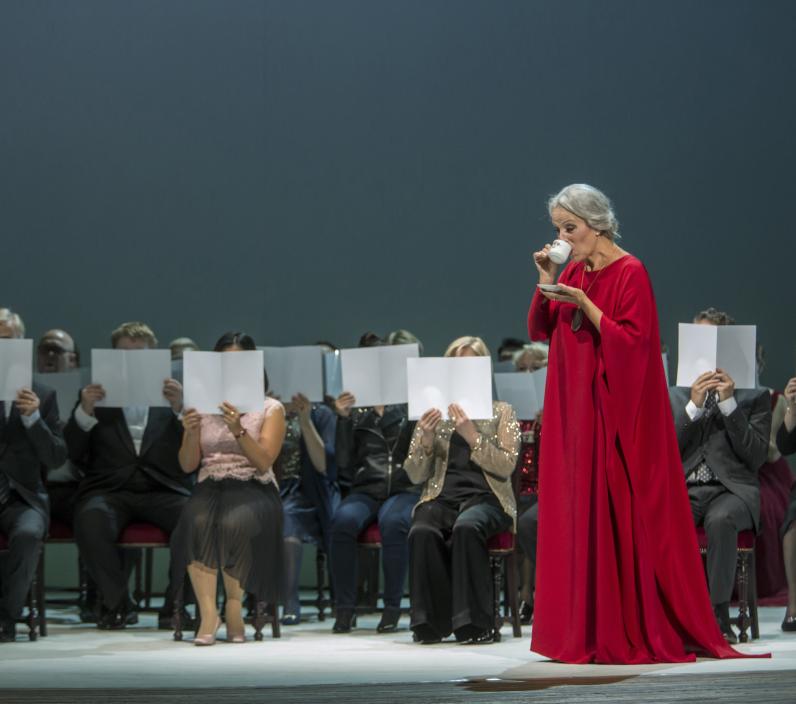 Fagerlund
This performance is no longer viewable as video-on-demand for rights reasons but other material about the production is still available.

Life, death and family wounds are at the centre of this newly commissioned opera based on the film by Ingmar Bergman, starring Anne Sofie von Otter in the main role.

Based on the film by Ingmar Bergman, Sebastian Fagerlund’s Höstsonaten (Autumn Sonata) is an elegiac meditation on life, death, and family tensions.

Autumn sets the scene for the first act.

Charlotte, a former concert pianist, visits the parsonage where her daughter Eva lives with her husband, Viktor. The last few years have been spent touring, so Charlotte has not seen either Eva or her other daughter, Helena, in years.

Helena has a disability and does not speak. Her mother is bewildered to find that Eva has taken her in at her home, away from the care home that Charlotte had arranged for her. Crying out in incomprehensible verbalisations, Helena frustrates Charlotte, who imagines an adoring audience for herself, a sort of Greek Chorus that backs and applauds her every decision. Visiting her daughters is proving too stressful for Charlotte. She will leave early, she decides, and the adoring audience approves.

That evening, Eva performs on the piano for Charlotte, but the pianist is not impressed, clearly more concerned with the (lacklustre) technicality of Eva’s playing than anything else. Viktor opens up to Charlotte about the tragic loss of their four-year-old son in a drowning accident. Eva feels the presence of the child with her still.

A scream interrupts Charlotte’s calm as she is preparing for bed: it is again Helena. Eva goes to comfort her, running into Charlotte. This triggers an argument between them.

‘Mother and daughter, what a terrible combination of emotions.’ - Eva, in Autumn Sonata

The second act unfolds with a heated argument between Eva and Charlotte. The daughter resents her childhood; the mother remembers a time where her career was everything for her. Dark secrets from the past emerge. And in a stunning moment, Helena speaks.

Charlotte leaves in the night and the family awakens to find her already gone. Later, when speaking to her agent, she talks of her family visit.

Finnish composer Sebastian Fagerlund creates a sound world that wraps the audience in the drama of Autumn Sonata. Librettist Gunilla Hemming has adapted the screenplay from Ingmar Bergman’s film to convey through opera the same brooding atmosphere and  reflection on human relationships that were so well portrayed in Bergman’s oeuvre. Mezzo-soprano Anne-Sophie von Otter creates the role of Charlotte, a retired concert pianist and mother to two adult daughters, Eva and Helena, both of whom have suffered greatly in their lives. The world premiere took place at Finnish National Opera on 8 September 2017.

‘The drama’s conflict revolves around two women who are agonizingly close to each other. They both feel the need to connect, yet each find it impossibly difficult to respond to the other’s craving.

‘The two women are desperate to be loved, but neither seems to be certain about their own love. Are they capable of loving – or would they even want to love? The answer is ambivalent, particularly in Eva’s case. Does she want to forgive? Does she want to “give birth”? How could the two switch roles, making the daughter a mother to her own mother?’

The torment of inevitability

An interview with Sebastian Fagerlund

Ingmar Bergman’s scaled-down and realistic film script is a challenge for an opera composer. What kind of liberties did the grand apparatus of the opera allow for your interpretation?

In opera you have more opportunity to make use of surreal elements. I can use music to depict simultaneous events from different places and events that have happened in the same place at different times, meaning that I can mix and match layers of time. Bergman’s film script, for instance, only alludes to Leonardo, the recently deceased lover of the concert pianist and mother Charlotte. In the opera I wanted him to have a stronger presence, so the dead man comments on the life of the living from a distance. Opera lets me play around with the limits between the real and the imaginary, stretching them to the extreme. I find that tremendously fascinating.

In Autumn Sonata this is particularly manifest in the music around Charlotte. The concert pianist and mother has travelled to her daughter’s house, but she still very much lives in her own world.

Yes. The chorus is an extension of Charlotte’s ego, the concert audience that accompanies her wherever she goes. This is because Charlotte needs her audience; it means everything to her. It follows in her footsteps, initially just in her imagination. Later on, little by little, it infiltrates the reality of the parsonage and the other characters, who begin to communicate with the choir, too. Such extensions of unrestrained fantasy can become absolutely momentous in an opera, showing the egotism of the mother in tragicomic and absurd scenes.

The opera is more surreal than Bergman’s film. The mute Helena, for example, suddenly recovers, rises from her bed and starts telling her story.

It’s one of those amazing moments that make you feel like everything is possible in opera. In the end, neither her inability to move and speak nor her traumatic experiences can stop her from bursting into life, colourfully describing her happy memories of the past. In effect, Helena’s world is the only completely pure and beautiful element of the entire opera.

When the family members of the opera converge under one roof, after years of separation, they begin to delve into the past. Despite their good intentions, old wounds are opened.

It’s tragic, yet unfortunately it’s very realistic. This inevitability haunted me through my entire composition process, becoming as important as the protagonists’ actions. Their objectives are noble, but they are chained by inevitability. In the end, their inability to take the last, crucial step makes change more difficult.

I’ve been wondering about the parallels this has in the real world. We have this huge need to achieve something or make a difference, because in principle we want to face our fears and let out our feelings. The final step, however, is an unsurmountable challenge to us, so everything stays the same. It’s so much easier to carry on acting as before, or follow in someone else’s footsteps – whether we’re talking about environmental, political, or societal issues.

Autumn Sonata will be performed during Finland’s centenary of independence. Did this affect your composition process?

No, it didn’t. Of course I’m happy that I had the chance to compose this opera for the centenary. On the other hand, it doesn’t excite me to just celebrate something that’s happened in the past. To me, it’s more important to look ahead. Höstsonaten – Autumn Sonata is about the interaction between human beings, the importance of caring for each other and taking into account other people’s needs and feelings. Could there be a more apt topic to explore during the centenary? I hope our opera will pose interesting questions to be answered in the future!

I call for courage to ask the right questions and take the right decisions, not only in art but in other parts of life, too. Be brave, run a risk!