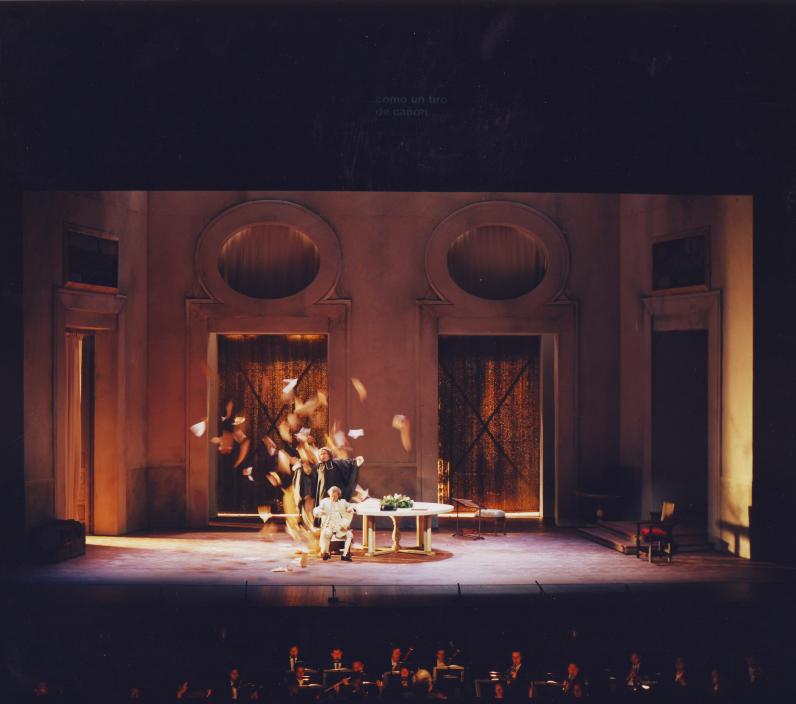 A passionate count enlists a local barber and jack-of-all-trades to help him woo and wed a quick-witted woman. But it will take all their cunning - as well as some disguises and bribes - to ensure love wins the day.

This production of Rossini’s comic masterpiece revives and stylises a historic staging from 1997 on the occasion of the 200th anniversary of the opera’s premiere. Directed by José Luis Castro, the magnificent scenography by painters Carmen Laffon and Juan Suárez depicting  Rossini’s romantic vision of the Andalusian capital in Seville itself.

5 things to know about The Barber of Seville

At the premiere of The Barber of Seville in early 1816, no one would have predicted that Rossini’s opera buffa (comic opera) would one day become one of the most frequently played and most cherished operas of all time. At the time, the piece appeared thoroughly derivative. Based on Beaumarchais’s famous play Le Barbier de Séville (1775), another composer, Giovanni Paisiello, had already successfully adapted it into an opera in 1782.

Paisiello’s supporters indeed considered Rossini’s version an affront and organised a disturbance at the premiere. The opening night was a disaster: Zenobio Vitarelli, who sang the role of Don Basilio slipped on a trapdoor and had a prolonged nosebleed and an unexpected cat wandered on stage. As a consequence, Rossini decided to stay at home for the second night and was startled to wake to the sound of applause after the performance.

Beaumarchais' original play was the first in a trilogy of dramas centring around the scheming Figaro. Today we might call The Barber of Seville a sort of prequel. It precedes Mozart’s famous opera The Marriage of Figaro composed 30 years earlier, the barber in Rossini’s opera is in fact Mozart’s Figaro pre-marriage. If Mozart’s opera can be said to contain greater philosophical depth and a more poignant social examination, few operas equal The Barber of Seville in terms of operatic comedy.

Although much more rarely performed, the third play in the Figaro-trilogy has also been adapted into an opera. Darius Milhaud completed La mère coupable (The Guilty Mother), based on Beaumarchais’s eponymous play in 1966.

Touching upon thorny subjects such as the new bourgeoisie and social mobility, The Barber of Seville manages a balancing act in speaking to the masses without alienating the nobility. Figaro is a man of humble origins, who can only count on his wit and hard work to move forward. He sets up his own barbershop and, in his own words, becomes a factotum, the one everyone relies on to do anything in town.

While opera culture was undoubtedly elitist at the time - and continues to be so in many places -, with Figaro, suddenly a character emerged with whom the working classes could identify. The delicacy of this shift arguably stems from the fact that while Beaumarchais’s play is explicitly satirical of nobility, Rossini himself was rather apolitical. As a result, the opera was enjoyable for audiences of all sorts of social backgrounds.

Rossini’s most popular opera owes a great debt to commedia dell’arte. In this Italian comic street theatre, which enjoyed great popularity in the 1600s, performers playing stock characters improvised dialogue based on a couple of familiar scenarios. In commedia dell’arte, there is typically a pair of lovers (innamorati) who strive to marry but are foiled for a time by one or more elders (vecchi). Helping the young lovers is one or more servants (zanni).

Beaumarchais had clearly learned from the commedia dell’arte structure, as most of the characters in his play are modelled after these character archetypes. The barber Figaro represents the zanni character type: he is wily, inventive and outsmarts everyone else. Doctor Bartolo is a combination of two types of vecchi characters: Il Dottore, a gluttonous silly old doctor, and Pantalone, a sinister miserly guardian. The music teacher, Don Basilio, is a variation on the deceitful and cantankerous zanni character, Pulcinella. And the list goes on...

The presently known overture actually stems from two earlier Rossini operas, Aureliano in Palmira and Elisabetta, regina d'Inghilterra, which explains why it contains none of the thematic material in Il barbiere di Siviglia itself. Early in the opera’s performance history, it was substituted for the original overture, which did not survive the first production at Teatro Argentino, probably by accident. The existence of the lost piece is documented in a letter Rossini wrote in 1866.

Rossini’s biographer Giuseppe Radiciotti refers to the unreliable Rossini acolyte Edmond Michotte’s account that the composer wrote the original overture based on themes supplied by the famous Spanish tenor Manuel Garcia, who portrayed the Count Almaviva at the premiere. Today we can only ponder what the overture sounded like and whether it truly contained Spanish themes.