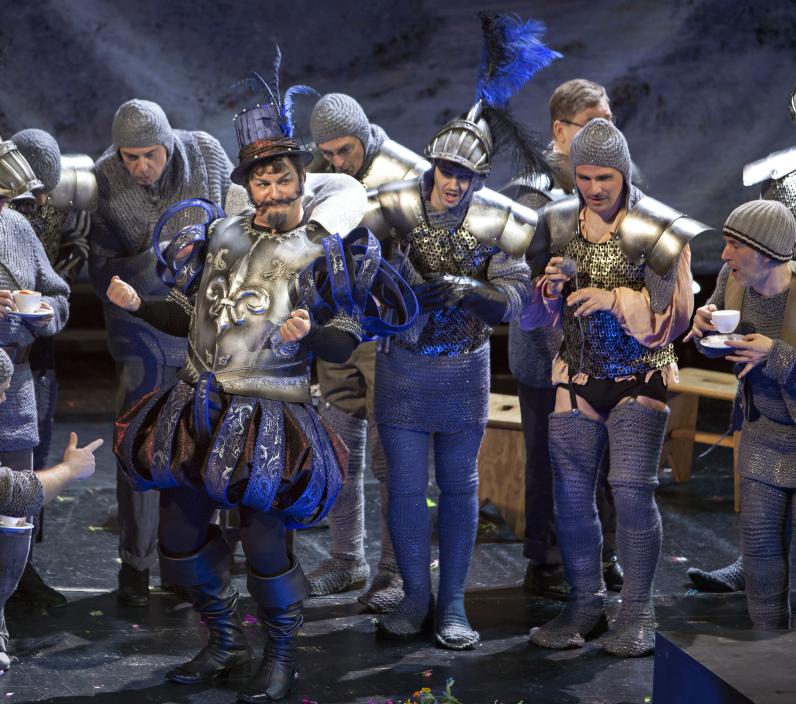 Offenbach
This performance is no longer viewable as video-on-demand for rights reasons but other material about the production is still available.

Bluebeard has more than one skeleton in his closet, but now they are coming back to haunt him. And they aren't happy...

Act 1. Country girl Fleurette is in love with the shepherd boy Saphir. But as we will soon find out, Fleurette is the Princess Hermia, abandoned in infancy and taken in by kind shepherds. And Saphir is also a prince, in disguise because he loves Fleurette. Boulotte is another country girl who pursues Saphir determinedly: 'well, cute or not, no one here ‘s as hot as Boulottewhen it comes to flirting and kissing'. Conducted by Stefan Soltész and directed by Stefan Herheim.

Act III. Suddenly Boulotte and the other former wives burst in, very much alive, to reveal Bluebeard’s crimes. Conducted by Stefan Soltész and directed by Stefan Herheim.

Music, movement, text, mythology, humour, satire... Barrie Kosky presents the essential elements of Offenbach's Blaubart and its link to the Komische Oper Berlin, of which Kosky is the current Indendant. Director Stefan Herheim and some of the cast offer their thoughts on Offenbach's operetta last seen on this stage in 1963 in a legendary production by the Komische Oper's founder, Walter Felsenstein.

Behind the scenes of Blaubart

Feature length documentary about the making of this new Komische Oper production of Offenbach's Blaubart. It was last seen on this stage in 1963 in a legendary production by the Komische Oper's founder, Walter Felsenstein. Get under the skin of Stefan Herheim's production with fascinating footage from the rehearsal process.

Country girl Fleurette is in love with the shepherd boy Saphir. But as we will soon find out, Fleurette is in reality the Princess Hermia, abandoned in infancy and taken in by kind shepherds. And Saphir is also a prince, in disguise because he loves Fleurette. Boulotte is another country girl who pursues Saphir determinedly.

Meanwhile, the King’s son is unsuitable to rule, so the King has suddenly remembered his long-abandoned daughter and asks his minister Oscar to find her. Oscar manages to find Hermia in her life as Fleurette and brings her to her parents.

Boulotte has won a village lottery, and Knight Bluebeard’s alchemist Popolani has decided to bring her to be his superior’s fifth wife. Popolani was also charged with the poisoning of Bluebeard’s previous wives, and appears to work at the bidding of his master.

Reunited with her royal parents, Hermia resists their attempts to arrange a fortuitous marriage for her, but is delighted to find out that her intended is Prince Saphir, the very same Saphir who was her shepherd boy.

Bluebeard has quickly grown tired of Boulotte and has set his sites on Hermia. He tells Popolani to prepare the usual anti-wife potion and to poison Boulotte. But Popolani has not actually been poisoning Bluebeard’s wives – he merely gave them a potion that put them into a restful sleep. Boulotte wakes up and leads all the wives in a feminist march towards the palace.

As Saphir and Hermia are to be united in marriage, Bluebeard bursts into the palace and announces the “tragic death” of his latest wife, Boulotte. He snatches Hermia and attacks Saphir. Suddenly Boulotte and the other former wives burst in, very much alive, to reveal Bluebeard’s crimes.

5 things to know about Bluebeard

1° Pretty much the opposite of Perrault’s tale

Created in 1866 at the Théâtre des Variétés in Paris, Offenbach wrote Bluebeard in close relationship with his usual librettists Meilhac and Halévy. If the title immediately brings up thoughts of Perrault’s horrible character, the composer and librettists were very loosely inspired by the French folktale. Far from that terrifying story, they turned it into an opera buffa. Bluebeard’ legend has often been worked into popular comic tales in Europe, such as English pantomimes. In this version, Bluebeard’s wives were not killed; Popolani, his alchemist, in charge of disposing of the women, simply putting them to sleep thanks to a potion and laying them in a cellar. Until the day when their awakening bears all the hallmarks of vengeance…

2° A satire of 19th century bourgeoisie

We know about Offenbach’s taste for political and social satire. Written in the same period as three of his great successes – La Belle Hélène (1864), La Grande Duchesse de Gerolstein (1867) and La Vie Parisienne (1866) –, Bluebeard is a critique of the 19th century bourgeoisie and of the Emperor Napoleon III. The sexual morals of the time indeed get a bashing: the character of Bluebeard is desperately searching for new women in order to fulfil his sexual appetite and alludes to the Emperor’s habits which were no secret in society. It is at the same time a lazy and incompetent elite and the foundings of the bourgeois marriage – fidelity and virginity – which are joyfully ridiculed.

3° An opera which found success at the time

The opera toured quite a bit at the time of its creation, showing its success. Bluebeard indeed mostly toured in Europe (London, Vienna, Berlin, Milan, Budapest) and in the Unites States, two years after the French premiere, in New York. This success also shows the absence of censorship on a work, which quite openly criticised the governing body. The recipe? Beyond earthy stories, we can think of actors he adored – José Dupuis and Hortense Schneider –, of the same creation venue – Théâtre des Variétés – and the trusting relationship with his librettists Meilhac and Halévy. Today, Bluebeard is less well known and performed in comparison to other of Offenbach’s works from the same period.

4° The legend of Bluebeard

The legend of Bluebeard fascinates and appears as a source of inspiration for many composers, among them: André Grétry who composed a rare comic opera entitled Raoul Barbe-Bleue in 1789, Paul Dukas and his Ariadne et Barbe-Bleue in 1906, or Béla Bartok with Le Château de Barbe-Bleue created in 1918.

Walter Felsenstein, one of the great German stage directors of the 20th century and founder of Komische Oper in Berlin, brought it into the repertoire of the house in 1963. It has been 50 years since the show hasn’t been performed, and the Intendant of Komische Oper has called upon the Norvegian stage director Stefan Herheim for a new version of Bluebeard. The title role is sung by Wolfgang Ablinger-Sperrhacken, one of the most versatile character tenors of his generation, who made is debut at Komische Oper.