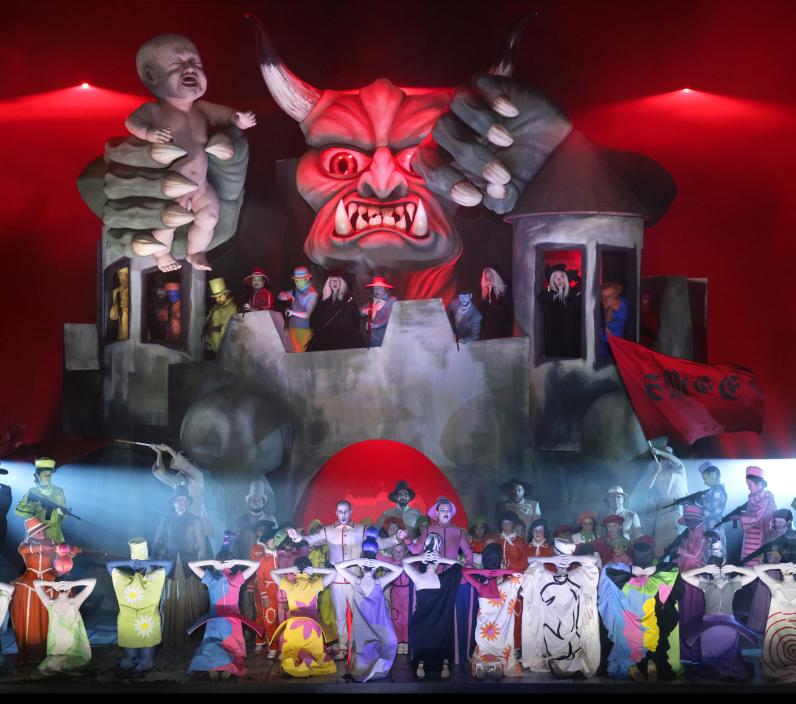 Schreker
This performance is no longer viewable as video-on-demand for rights reasons but other material about the production is still available. 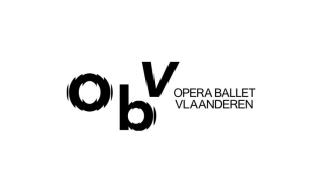 Reduced to poverty by slander, a blacksmith seals a pact with the devil for seven years of work and good living. When his time is up, he outwits the messengers of Hell, only to be turned away from the gates of heaven.

It is a rare treat to discover an unknown opera, all the more so when opera houses are forced to remain closed. In Ersan Mondtag’s vivid, politically charged staging, Schreker’s ‘magic opera’ enchants as a colourful cocktail of musical influences ranging from reminisces of Kurt Weill to baroque counterpoint.

Act I. It is the late sixteenth century, in Ghent. In Smee’s smithy (Leigh Melrose), his assistants are hard at work making armour and ploughshares. It is the time of the Eighty Years’ War between Spain and the Netherlands. A page arrives with the malnourished horse of Sancho d’Avila, the Spanish general who sacked and burned Antwerp in 1576. Conducted by Alejo Pérez and directed by Ersan Mondtag.

'Der Schmied von Gent by Franz Schreker will be the discovery of the season. It is very rarely performed. Very few people know of this opera,' says Jan Vandenhouwe, Artistic director opera at Opera Ballet Vlaanderen in this short interview.

Behind the scenes of Der Schmied von Gent

Discover how the amazing sets and wigs of Opera Ballet Vlaanderen's production of Der Schmied von Gent were made.

It is the late sixteenth century, in Ghent. In Smee’s smithy, his assistants are hard at work making armour and ploughshares. It is the time of the Eighty Years’ War between Spain and the Netherlands. A page arrives with the malnourished horse of Sancho d’Avila, the Spanish general who sacked and burned Antwerp in 1576. The page warns Smee not to pull any ‘gueux’ tricks, whereupon his workers break into a revolutionary protest song.

Slimbroek, a rival blacksmith who is jealous of Smee, badmouths him to the Ghent nobility. Smee loses his livelihood and sees no other choice than to drown himself in the River Leie, but the branches of a tree hold him back. Astarte appears, proposing a fair deal: if Smee pledges his soul to hell, he will be showered in the Dark Kingdom’s treasures for seven years. Afterwards, he can become Astarte’s favourite. Especially this erotic promise convinces Smee to sign the pact with the devil. Upon his return, he finds the smithy transformed into a thriving business. Wordless figures supply riches, fine foodstuffs and lavish quantities of alcohol. The workers are once again busily forging armour and ploughshares.

Seven years later, Smee sits dejectedly in his garden. In anticipation of his journey to hell, his conscience is troubled by the misfortunate poor. Just when his self-pity reaches its peak, the Holy Family appear in the form of beggars. Smee and his wife take them in and care for them attentively, sparing no cost. Joseph and Mary reveal their true identity and offer Smee three wishes which will be granted by the infant Christ. Smee proceeds to wish that no one shall ever be able to climb down from his plum tree, no one shall be able to get up from his easy chair, and no one shall be able to escape from his burlap sack, against his will. His wife calls him crazy.

A first emissary from hell appears to collect Smee’s soul. It is magistrate Jacob Hessels, the Spaniards’ executioner of heretics in Ghent. The smith manoeuvres him towards his plum tree, in which Hessels becomes stuck. Smee shatters every bone in his body and orders Hessels to hand over the pact with the devil. The devil’s pathetic underling cannot help him and the smith lets him go. Next appears the Iron Duke of Alba, the ruthless Spanish governor of the Netherlands. He, too, is outwitted by Smee. While the men sing a satirical revolutionary song, they beat him with the easy chair in which he is riveted to the ground. Finally, Astarte appears, naked and covered in wounds. She expresses her feelings for him; that is why she saved Smee from suicide. He promises to heal her wounds, which were inflicted upon her by God, and puts her in his sack. Smee’s wife gives the infernal prisoner a forced baptism, whereupon the pact with the devil is delivered up. Smee is a free man again, but his smithy collapses and the denizens of hell make off with all his riches.

Smee is sitting amidst the ruins of his smithy, having become a very old man. He says farewell to his wife and dies. As a spirit, he walks to hell, but the imposter is refused entry, for his mistreatment of hell’s creatures. Smee chooses the path to heaven, but Saint Peter does not allow him into paradise because he is carrying the horn of plenty, Astarte’s final daemonic gift. At this rejection, Smee decides to then open a tavern at the gates of heaven.

Slimbroek and Flipke appear in heaven and ultimately Smee’s shrewd wife, who is instantly granted entry into paradise. Smee attempts to sneak in, concealed beneath her skirt. Saint Peter sees through the trick and recognises him as the Devil’s mercenary. Then, Joseph appears with the heavenly host and orders Smee to list his good and bad deeds as a test for admission.

Smee justifies the pact with the devil on the grounds that he had so much pleasure in life, but Joseph rejects this, yet the fact that Smee fought against the Spaniards in Zeeland convinces him. When the smith recounts that he gave Hessels, Alba and Astarte a beating, a sigh of relief is heard in heaven. Smee is granted entry and the angels sing hallelujah.

After his initial breakthrough with Der Ferne Klang in 1909, Franz Schreker’s successful opera career was about to crumble before his eyes. Rightwing hecklers marred the premiere of Der Schmied von Gent on 29 October 1932 in Berlin. Within a couple of years, the Austrian Jewish composer fell from being lauded as the future of German opera to having his ‘degenerate’ work banned and losing his prestigious teaching positions. He died in Berlin on 21 March 1934, two days short of his 56th birthday. Having been largely forgotten, Der Schmied von Gent was rediscovered in a Berlin State Opera staging in 1981. Opera Ballet Vlaanderen’s effervescent production presented in February 2020 marks merely the 4th modern performance of the opera.

There’s a delightful symmetry in the fact that the opera has arrived in the city in which the story is based. Schreker wrote the libretto himself. Based on the Belgian author Charles De Coster’s story, the plot is set in the 16th century, during the Spanish domination of Flanders. Transforming the old folk tale of Smidje Smee, Schreker showcased the cunning of the influential blacksmith Smee, who while dealing with the occupying force has never disowned his patriotic, freedom-fighting ways of yore. Schreker intended Der Schmied von Gent to be a novel type of folk opera, considering it to be ‘Brueghelian’ in scope. It truly parts with his earlier works which relentlessly charted the chasms of his protagonists’ psyche, preferring to plunge into a fairy tale world. Musically too, Schreker operated a late change of style, departing from his former post-romantic tendencies and embracing a plurality of influences ranging from New Objectivity and the zeitoper to neo-baroque elements.

With his opera debut, German theatre’s enfant terrible Ersan Mondtag offers a graphic, dazzling interpretation in which Schreker’s stylistic versatility is met with hallucinogenic visuals. But do not be fooled by the expressionistic drollery: the vibrant costumes, the revolving stage depicting medieval Ghent on the front and a child-gulping demon on the back. The production does not shy away from sombre subject matters highlighting the darkest hours of Belgian history. Mondtag explains ‘There are many ways to look at Smee's story. He makes a pact with the devil, which makes him immensely rich in a short time. Then he doesn't want to pay the agreed price. That story is very similar to that of colonialism: acquiring wealth by robbing a country, then using that wealth to build, for example, a gigantic station - as happened in Antwerp - and never accounting for that transaction afterwards'.

Almost 240 years separate the 1648 treaties of the Peace of Westphalia, ending the Eighty Years’ War and finally recognising Dutch independence, and the Congo conference in 1884, which established King Leopold II imperial rule. And yet, the production raises the question of a connection between these two historic events. ‘Is it conceivable’, speculates the dramaturg Till Briegleb, ‘that the terrorization of Flanders during the Eighty Years' War is at the root of the almost eighty years of terror perpetrated by Belgium in Central Africa?’ Although an opera might not be able to answer such a complex question, Mondtag uses this welcome opportunity to highlight the lingering collective traumas caused by violence and repression.

Mondtag’s reading of Der Schmied von Gent as a heralding foundational fable of Leopold II’s exploitation of the Congo makes for a performance like none other. In the first two acts, he follows the libretto rather closely: despite tearing the plot from its historical context, the action is still visibly located in Flanders. However, the plot thickens in Act 3. Subtle allusions to African art flare up all of a sudden and Smee returns as the ghost of Leopold II. After his death, the hell he is sent to uncannily recalls the Congo. As evidenced by the unexpected interruption by Patrice Lumumba’s independence speech, the Congo is now free. Free to deny him access, so Smee has to retrace his steps. Instead, Smee-as-Leopold II ventures to heaven’s door. Warded off again, Smee finds himself running a waffle stand inside a museum. Contrite, he confesses his sins and is absolved, which takes on a different meaning when enacted by the Belgian king’s impersonator. Can absolution be this readily given, trauma this easily overcome?