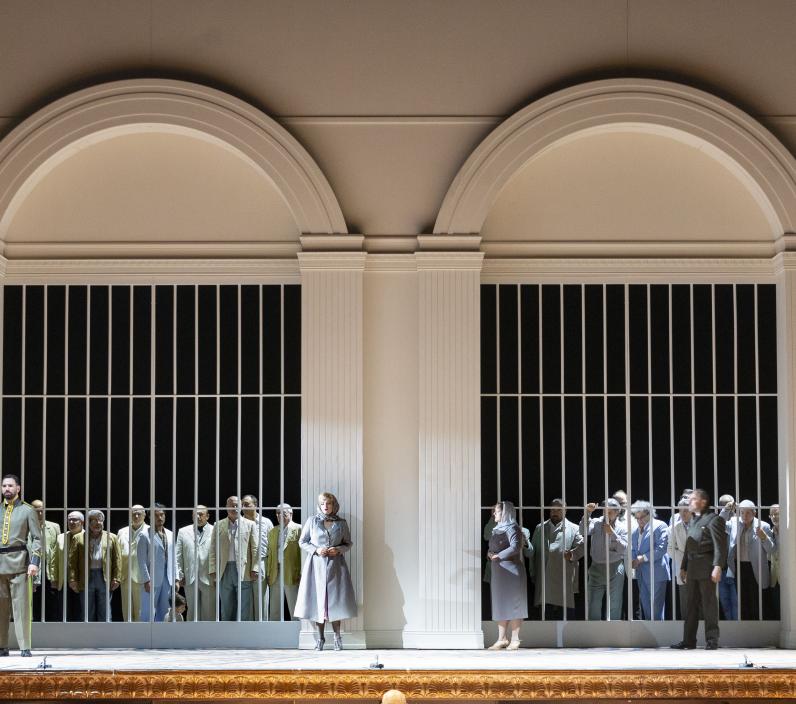 In the aftermath of the Trojan war, a series of unrequited loves threatens to destabilise the fragile peace. But for a spurned Spartan princess, there are only two options left: forgiveness and murder.

The most ambitious and innovative of all Rossini’s operas, Ermione was a calamitous failure on its opening night at the Teatro di San Carlo 200 years ago. It now returns to the Neapolitan theatre in a new production by Italian director Jacopo Spirei starring American soprano Angela Meade in the title role.

Act II. Hermione (Angela Meade) is prey to warring emotions: her love for Pyrrhus, the desire for death, and the lust for vengeance. This is the first part of Hermione's famous Act II scene. Conducted by Alessandro De Marchi and directed by Jacopo Spirei.

'Ermione was one of Rossini's most complicated operas,' says Professor Sergio Ragni, an expert on the life and works of the Italian composer. In this interview, take a look around his home and discover a museum of treasures.

Behind the scenes of Ermione

Pyrrhus, son of Achilles and King of Epirus, has promised to marry Hermione, daughter of Menelaus, but he has fallen in love with the Trojan prisoner Andromache, widow of Hector. In a dungeon, the Trojan prisoners recall the past greatness of their country and bewail their fate. Andromache enters with Attalo and Fenicio. She has been allowed to spend a few minutes with her son Astyanax. Attalo advises her to take off her mourning clothes and to think from now on about her son’s future, but Fenicio interrupts him, having understood that Attalo means to encourage Pyrrhus’s love for Andromache, a love that the Greeks will never tolerate and that could only lead to another war.

Outside, the palace handmaidens invite Hermione to enjoy the hunt, but the princess is suffering the pangs of jealousy. When Pyrrhus enters, she reproves him for loving Andromache and threatens revenge. But Pyrrhus is not a weak man, even if he is worried by the announcement of the arrival of Orestes as a messenger from the Kings of Greece.

In the palace, Orestes’s sole thought is of meeting Hermione again, for he has long been in love with her, but Pylades urges him to control himself and to think rather of the mission with which Greece has entrusted him. Pyrrhus enters with his court and, to Hermione’s fury, he invites Andromache to sit among the nobles. Orestes explains his mission: the Kings of Greece desire that young Astyanax be put to death in order that the power of Troy should not rise again. Pyrrhus not only refuses this request but publicly reveals his love for Andromache and announces his intention of marrying her.

Outside the palace, Cleone advises Hermione to allow Orestes to avenge her. When Orestes declares his love for her, Hermione cannot make up her mind one way or the other, but she does not repulse him. Pyrrhus returns with his followers. Since Andromache, true to the memory of Hector, has refused his hand, he has decided to give up Astyanax to Oreste and to make his peace with Hermione. But when the guards lead Astyanax on, Andromache is overwhelmed by her maternal instincts and she begs Pyrrhus to give her time to think matters over. Pyrrhus is delighted, whilst Hermione and Orestes are overcome with consternation and rage.

In the palace courtyard, Pyrrhus is overjoyed to hear that at last Andromache has consented to become his wife. He orders that the wedding ceremony take place without delay. In reality, Andromache intends to make him swear upon the altar to protect Astyanax, then she will kill herself. Meanwhile, Hermione is prey to warring emotions: her love for Pyrrhus, the desire for death, and the lust for vengeance. However, enraged by the sight of the wedding procession of Pyrrhus and Andromache, she demands that Orestes kill the traitor. But she instantly regrets this, and feels once more inclined to forgive Pyrrhus - all in vain, because Orestes gives her his dagger, dripping with the blood of Pyrrhus. Hermione wildly upbraids him for not having understood her real feelings, and falls fainting to the ground after having invoked the Furies to punish the author of the crime; Pylades and his men drag Orestes back to their ship to keep him from falling into the hands of the angry populace.

5 things to know about Ermione

1° An offer he couldn’t refuse

By his early 20s, Gioachino Rossini was already a rising star. His opera L'italiana in Algeri had been a big success in Venice, and he was in demand by leading opera houses across Italy, including the Teatro alla Scala in Milan. But he was given his biggest vote of confidence in 1815 when the city of Naples invited him to take up the posts of resident composer and director of music for its royal theatres, including the Teatro di San Carlo. For the first time, Rossini was able to write regularly for a resident company of first-rate singers and a fine orchestra, with adequate rehearsals, and schedules that made it unnecessary to compose in a rush to meet deadlines.

2° Rising from the ashes

The city’s musical establishment was not immediately welcoming of Rossini, so for his first opera for the Teatro di San Carlo, Elisabetta, regina d'Inghilterra, he recycled a selection of the best music from his earlier works that he knew the audience had never heard before. It was received with tremendous enthusiasm, as was the Neapolitan premiere of L'italiana in Algeri, and Rossini's position as resident composer was assured. Early in 1816, the theatre’s interior was destroyed by a fire but on the orders of King Ferdinand I it was redesigned and rebuilt within only ten months. The Barber of Seville and La Cenerentola received their premieres in Rome in the meantime, but once the Teatro di San Carlo reopened it once again became the place for Rossini to show off his new creations, including Armida, Mosè in Egitto, Ricciardo e Zoraide and, in March 1819, Ermione.

Based on Jean Racine’s 1667 play Andromaque, Rossini’s Ermione is set soon after the Trojan War. It tells the tale of Hermione’s assassination of King Pyrrhus after he rejected her in favour of Andromache. The opera was considered a failure and was withdrawn after only seven performances. Despite this, Rossini seemed to be quite fond of this work and kept its manuscript for the rest of his life. ‘It’s my little Italian Guillaume Tell,’ he is reported to have said in old age, ‘and it will not see the light of day until after my death.’ Eventually, a concert performance was given in Siena in 1977, with the first modern staging coming ten years later at the Rossini Opera Festival in Pesaro.

For Alessandro De Marchi, Ermione is a difficult opera to conduct because of the overall attention it requires. This is due not only to its continuous dramatic tension but also because there is little room to breathe between the arias and the recitatives, with Rossini connecting each piece to the next in a manner reminiscent of Gluck’s French operas. ‘Even more difficult,’ says De Marchi, ‘but which helps the dramaturgy a lot, is our choice to perform the recitatives based on the rhythms of the words, giving the singers the freedom to interpret the text as if they were actors. This obviously implies a greater attention on the part of the orchestra to accompany the voices properly.’

For years, the American soprano Angela Meade had wanted to sing the title role in Ermione: ‘I wasn’t sure if it would ever come up because it’s such a rare opera. And then it happened to come up with Alberto Zedda in A Coruña, Spain, and then consequently in other places, also in concert.’ Then she was invited to sing the role at the Teatro di San Carlo. ‘I thought, “How interesting for it to come up at the place where it was birthed!” Especially on the 200th anniversary. It’s a very special occasion to be here for.’ Meade explains that Ermione is a very complicated character: ‘She goes through a wide gamut of emotions ranging from love to hate, to rage, to pity, to a whole bunch of things! She turns on a dime a lot of the time, she just immediately changes from one emotion to another, which makes it complicated. I’m just trying to bring all those different emotions to it.’