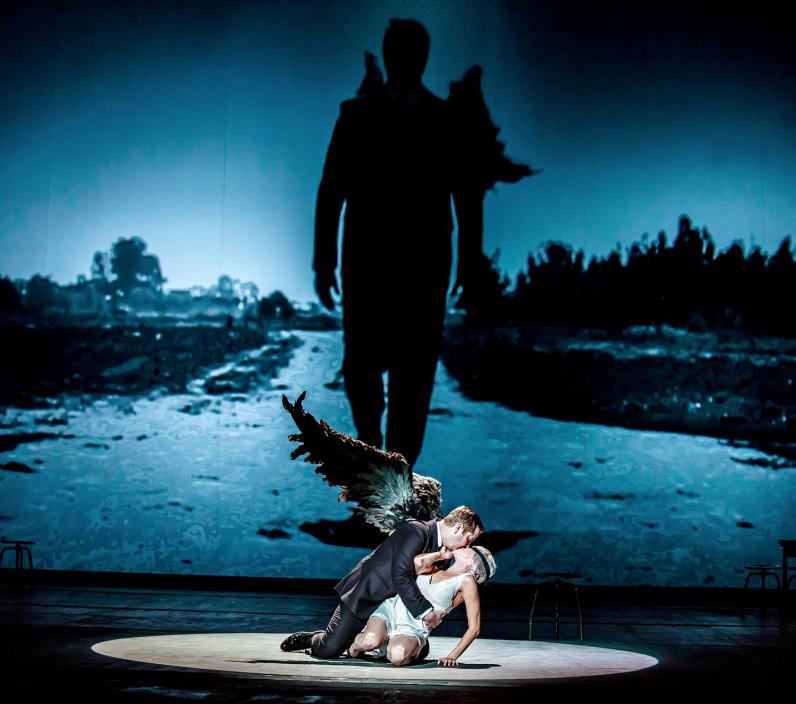 Różycki
This performance is no longer viewable as video-on-demand for rights reasons but other material about the production is still available.

Psyche (Joanna Freszel) is alone in her dressing room. She describes her fascination about her dream where a mysterious man visited her. Her lover is no other than the God Eros (Tadeusz Szlenkier), who has been called forth by Psyche, hiding his true identity. Even though Psyche knows she is not allowed to look into his face she can’t stop herself. They will never see each other again... Conducted by Grzegorz Nowak and directed by Barbara Wysocka.

When Psyche appears on set, mid-take, in incomplete costume, at the wrong time, everyone makes fun of her. At that moment, Laida (Anna Bernacka) decides to sing a song about Eros. Conducted by Grzegorz Nowak and directed by Barbara Wysocka.

Psyche is an actress. One night, a mysterious figure visits her, hiding its countenance. It’s the God Eros. Troubled by this encounter, she will face the question of love through her different characters, without finding the answer to it. Her quest will definitely make sense when she meets Eros for the very last time…

The conductor's assistant, Rafal Kloczko, wrote his thesis about the opera. He explains why, according to him, Różycki brought Polish music into the modernist age.

The women’s dressing room. The actresses are getting ready to go on set. The mood is cheerful. Only one of them – Psyche – is sad and absent-minded.

The arrival of set manager Arete brings the actresses to attention. Blaks, the lazy dressing room assistant, complains about the noise and being overworked. At Arete’s sign the women leave for the set.

Psyche dawdles, fellow actress Hagne stays with her. Psyche confesses that a mysterious figure visits her at night. She describes her fascination with growing rapture. The frightened Hagne flees.

Called forth by Psyche, the mysterious lover appears, hiding his countenance. Psyche knows she’s not allowed to look into the stranger’s face. The lovers’ tryst is interrupted by Blaks, who accidentally throws light onto the face of the mysterious visitor, who introduces himself as the God Eros. Contravening the ban, Psyche looks straight into the God’s face. He tells her they will never see each other again. Eros leaves.

Hermes the divine messenger arrives. He tells Psyche that looking into the God’s face condemns her to a journey through centuries and worlds on an eternal quest for what she desires. On this journey she will keep meeting Blaks.

The set of the film Rome

The set where scenes from provincial Rome are to be shot. A large group of actors and extras in Roman costumes enter, shooting is about to begin, the film crew is busy working.

In the scene being shot, two Greeks complain about Roman bondage and declining morals; their conversation is interrupted by the Roman prefect played by Blaks, who has become a film star.

Suddenly Psyche appears on set, mid-take, in incomplete costume, at the wrong time. Everyone is dismayed. The set manager unsuccessfully tries to save the situation. The actors encourage Psyche to sing a song. Psyche sings about searching for her lover, the God Eros. Everyone makes fun of her, humiliating her and treating her like a crazy person.

Film star Blaks tries to throw Psyche off the set. The actors argue. The director wants to continue, but Blaks has fainted. His friends laugh that it must be due to the impression Psyche made on him. Blaks recovers from his reverie and work continues. After the shoot Psyche is alone and starts talking with the dresser. The conversation leads her thoughts in completely new directions.

The film Under the Cross

The next film featuring Psyche is set in a medieval convent in Spain.

The Portress and the Abbess are talking about the bishop’s planned visit. The chaplain, disturbed by Sister Psyche’s behaviour, tells her to pray and work on bettering herself. Then Hanna, a girl from the village, appears and tells Psyche about the outside world and about life. Psyche the nun realizes she cannot live in a cloistered convent. Her mind is filled with conflicting thoughts.

The Portress rushes in. A row over the gate keys begins: Psyche wants to leave at all costs. The bishop arrives, played by Blaks. Blaks the bishop sentences Psyche the nun to remain in the convent dungeon for the rest of her life.

Psyche the actress assumes the tension of her character, identifying with her too strongly. She doesn’t know which reality is true. The film gets mixed up with life, and the character’s experience is transferred to the actress. The world of the convent inevitably disintegrates and the bishop’s ruling is no longer valid. It all turns out to have been a film, a scene, something that was not a true refuge for Psyche but an illusion created by art.

Psyche the nun is punished by Blaks the bishop. Psyche the actress doesn’t want to be in the film any more.

The film With Blood about the revolution

It’s 1792, the French Revolution. This time Psyche plays a simple girl who leads the people in the name of freedom. Young de la Roche tries to woo her, but Psyche doesn’t want to be involved in love, only in politics.

A struggle for power over the crowd ensues between Psyche and a butcher played by Blaks who is all for killing traitors.

The film has a happy ending.

Bored, Psyche the actress is drinking and partying in male company. The party is in full swing, wine flowing freely, the men singing and joking. Stefan arrives during one of the toasts, late and clearly despondent. It’s obvious there is more between Psyche and this late guest than just friendship. Blaks, Psyche’s husband, joins the company. He’s glad his wife is having a good time. Stefan takes advantage of a moment when Psyche is alone and professes his love for her. They arrange to meet later, after the party is over. Stefan leaves.

Blaks says goodbye to the other guests. Once he is alone with Psyche, he starts a marital fight which turns into a full-blown row full of hatred and contempt.

After Blaks leaves, Stefan returns. Psyche is on the verge of madness, she toys with her lover. When Stefan exits, humiliated, Psyche realizes her great loneliness and the trap she is in. She sees only one way to liberation. Following this path, Psyche meets Eros once again, but this time she sees his other face: that of Thanatos.

5 things to know about Eros and Psyche

1° Ludomir Różycki and the Young Poland

Born in 1884 and died in 1953, Ludomir Różycki studied with the German composer Humperdinck (Hänsel und Gretel) at the Akademie der Künste in Berlin. Probably less known today than his contemporary Polish composer Szymanowski (Krol Roger), Różycki founded with him as well as with other composers - Fitelberg and Szeluto - the Young Poland, an informal movement of young composers. This group, created in 1905, was formed around the influence of late romanticism from Wagner and Strauss but was also close to the Group of Five movement formed by Russian composers Mussorgsky, Borodin and Rimsky-Korsakov. The ambition of Young Poland? To bring Polish music into modernity.

2° Genealogy and reception of Eros and Psyche

At the base of the opera is the drama by the same name by Jerzy Żuławski, a member of Young Polish Literary, whose work was extremely popular in the early 20th century. Musically, the composition of Różycki alludes at times to Puccini, and at others, to Strauss. The premiere of the opera sung in German was given in Wroclaw in 1917, then in Polish in 1918 at the Warsaw Opera. In 1930, Różycki received a Polish State Prize for this work. It must be said that the work was a huge popular success, especially in the interwar period, with many performances on European opera stages.

3° Eros and Psyche, a rarity

Despite the success that opera encountered at the time of its creation, it virtually disappeared from theatres after the Second World War. Only the theatres of Wrocław and Poznań in Poland have staged it since, but it did not enter the repertoire. Today, unjustly forgotten, the Teatr Wielki brought this piece back to life in 2017, one hundred years after it was created in Wroclaw.

4° A production that mixes opera and cinema

Różycki's opera is a real journey of Psyche and Blaks in search of Eros, through 5 eras corresponding to 5 different places: the Golden Age in Arcadia, the Roman Empire, a medieval monastery in Spain, Paris at the time of the French Revolution, and finally a European capital at the beginning of the 20th century. For this Teatr Wielki production, the director Barbara Wysocka has imagined transforming these places and periods into five locations of different film shoots: the videos in the background appear as an abyss of cinema, the images are strong. In short, she shows us the workings of cinema on an opera stage!