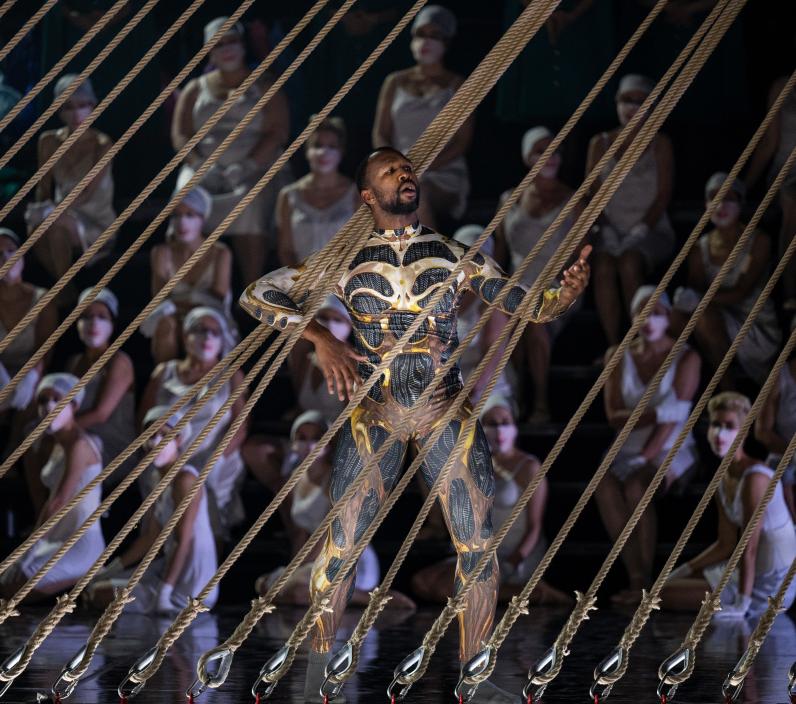 Wagner
This performance is no longer viewable as video-on-demand for rights reasons but other material about the production is still available.
Sung in
German
Subtitles in
English
German

Richard Wagner came across the legend of The Flying Dutchman in 1838 through Heinrich Heine’s From the Memoirs of Herr von Schnabelewopski. After a stormy voyage from Riga to London – Wagner was again on the run from creditors – he chose the material for his next opera and began to compose it, with the unpredictable power of the sea still fresh on his face. Against the backdrop of this wild nature, Wagner exposes in Holländer his utopia of a love that transcends, offered as an antidote to the 19th century zeitgeist of pounding industrialisation and economic growth. Roger Vontobel’s new production from Mannheim is streamed live on the opening night and audiences around the world can share in some of the most rousing music written in opera.

Sneak peek at The Flying Dutchman

Did you meet the ship in the sea, with blackened mast and crimsoned sail?

In this extract from Act III of The Flying Dutchman, sailors celebrate their safe return to land. They call out to the Dutchman’s ship, inviting the crew to join them, but the ship remains dark and silent. Daland’s sailors deride the mysterious crew and their captain.

Was it all a dream?

Marion Tiedtke: During our preparations, we constantly asked ourselves: How can we interpret this opera, which is almost 180 years old and has been performed countless times, for modern times?

Roger Vontobel: My approach to these old stories always relates to a particular and deliberate way of storytelling – a kind of gateway to interpreting the opera. Very early on, Wagner was very critical of the development of capitalism – not dissimilar to the way we view the climate change catastrophe today: we too want to break out of an environment that oppresses and makes us ill, but in our powerlessness, we tend to escape into a substitute or illusory world to distract ourselves. Senta's story is an escape from a patriarchal and capitalist world where there are no values other than material ones. She longs for a greater purpose, for happiness of a different kind. She loses herself in this longing, numbs herself with daydreams that point to a schizophrenic, ultimately lethal state of mind from which there seems to be no escape.

MT: How did you come up with the idea of ropes in the set and what do they portray?

Fabian Wendling: The set design is based on the spinning mill at the beginning of the second act, which we decided to use as the starting point for our interpretation. We maintained the idea of the spun threads, but chose the rougher variant of rope, which can equally symbolise the rugged working world of the men at sea and the rough factory world of the women in the spinning mill. Senta’s everyday life takes place in this mill, from which she wants to escape with the Dutchman, so it made sense to depict her dreams and longings as distortions of this setting. In the end, the rope becomes the cord with which the women tie their bodices and with which Senta ultimately kills herself. In the opening scene, 53 rope winches form a kind of prison and a raised platform serves as a surveillance post for the guards

MT: Since Senta’s ballad was Wagner‘s starting point for the composition, we decided to interpret the opera from Senta’s point of view:  we find ourselves in a world in which dreams and reality intertwine. This allows for a new freedom with the costumes, which often appear as quotations of contemporary culture. What were your main inspirations?

Ellen Hofmann: For me, The Flying Dutchman is a horror tale that could just as easily take place in a dystopian novel from the eighties as in a modern Hollywood film by Quentin Tarantino. When we talked as a team about the group of spinning girls in the second act, we often talked about Margaret Atwood's novel The Handmaid’s Tale and the series that came out of it. They are basically forced labourers in Daland's house, making their own corsets and dresses to please the arriving sailors. They are 'groomed' for the marriage market in order to be 'presented to the man' in the best possible way. In our production, these are costumes in the style of the fifties, when the women still dressed in a very feminine way. Senta's governess Mary is based on Aunt Lydia in Atwood's novel: a guardian who on the one hand enjoys the confidence of her girls, but on the other hand punishes and tortures them so that no one dares break out of the system. The costume for Daland is inspired by Leonardo Di Caprio as Calvin Candie in Django Unchained.

MT: What stylistic dance techniques do you use in your work and how do you develop your choreography with them?

Zenta Haerter: I am influenced by classical and modern dance, but over the years, I have developed my own choreographic language. For some time now, I have been working mainly with dancers who are familiar with new dance techniques that I did not learn in my training. I find it enriching to be able to benefit from dance techniques that are unknown to me and I select my dancers accordingly. However, they have to know my basics so that we have a common starting point. I use a mixture of improvisation and choreographic elements. Specifically in this opera, we combine classical ballet language with moments of dreaming, longing, beauty, lightness - the dream of redemption, which other modern dance techniques deliberately counteract.

MT: In the overture, which unites all the musical elements of the opera and has often been called a 'Meeressinfony' (sea symphony), the audience experiences a cinematic journey through Senta's eye into the world of her soul, which ultimately leads us into the first act. What visual associations and techniques were important to you in the creation of the dream journey into Senta's mind?

Stefan Bischoff: With the video we created an opening to the opera where dream and nightmare motifs intertwine in Senta's head. In other words, I worked with the film technique of collage. We filmed with the singer and added footage from the ocean depths, fjord landscapes and a journey to the place where the story begins. It feels like a rush, a trip, before Senta takes her own life. At the end, everything rewinds back at a hurtling pace. We are familiar with these techniques from cinema films, for example. They allow us to combine several planes: reality and dream, time and space.