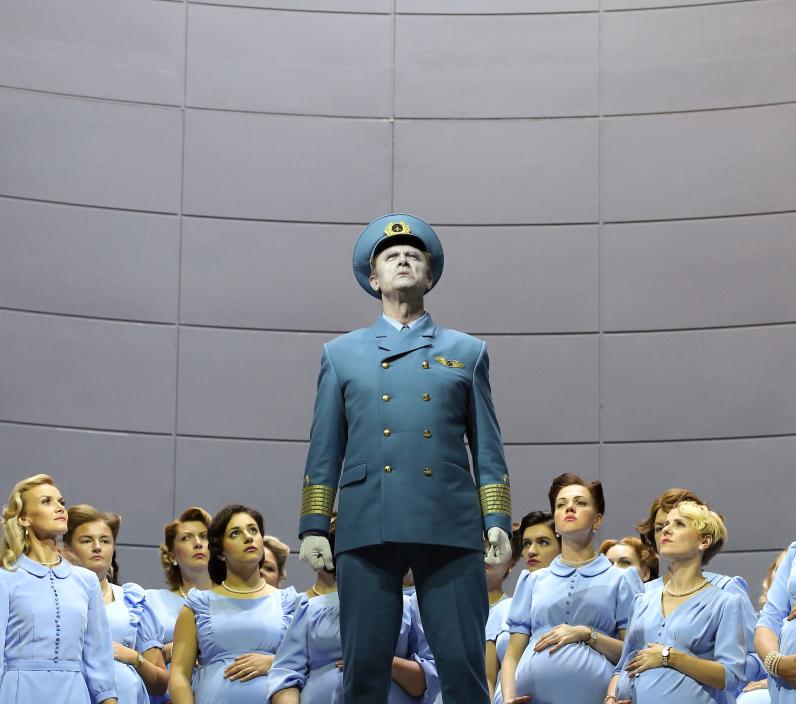 When the mysterious captain of a phantom ship is cast ashore in a storm, he tries to escape eternal damnation through the love of a faithful woman.

Wagner wrote his first great opera after a perilous escape from Riga. Latvian National Opera returns this otherworldly tale to its origins in a new production directed by Viestur Kairish.

Act II. As a child, Senta (Vida Miknevičiūtė) fell in love with the story of the Dutchman, the harried captain doomed to forever plough the waves with his ghostly crew. Now a grown up lady and the target of unwanted attention from a possessive village lad, she longs for her childhood hero – for if only he were real, she would love him unconditionally and save him from his curse.

Seven years since he last set foot on land, The Dutchman (Egils Siliņš) is once again given a brief respite from his eternal wanderings. In this introspective aria he recalls the origins of his curse and longs for the Day of Judgement, having lost all hope for redemption. The intensity of the piece anticipates other bass-baritone monologues that Wagner would write later in his career, including those of Hans Sachs in Die Meistersinger von Nürnberg and Wotan in Der Ring des Nibelungen.

5 things to know about The Flying Dutchman

The myth of a phantom ship doomed to sail the oceans forever is likely to have originated from the golden age of the Dutch East India Company in the 17th century. The first print reference appeared in John MacDonald’s 1790 travelogue Travels in various parts of Europe, Asia and Africa during a series of thirty years an upward, in which sailors see the Flying Dutchman during a storm. Over the next half-century several stories inspired by the legend appeared in print, including ‘Vanderdecken’s Message Home’ and Samuel Taylor Coleridge’s 'The Rime of the Ancient Mariner'.

Heinrich Heine’s satirical novel Aus den Memoiren des Herrn von Schnabelewopski (‘The Memoirs of Mister von Schnabelewopski’) was the first to introduce the cursed captain setting foot on land every seven years with the chance to be saved through the devotion of a faithful wife. Heine presented this redemptive power of love as a means for ironic humour, but when Wagner wrote his libretto for The Flying Dutchman (Der fliegende Holländer) he took the theme literally and seriously. The myth of the Flying Dutchman has since been retold in countless adaptations, such as the 2006 Disney film Pirates of the Caribbean: Dead Man’s Chest.

3° Navigating the choppy waters of life

‘The most universal trait of mankind,’ said Wagner in connection to the Flying Dutchman myth, ‘is the longing for calm amidst life’s storms’. He saw the Dutchman as symbolising the eternal search for solace and salvation from the rough waves and weather of life. That is why he reminded conductors and directors not to neglect the sea itself in their productions of The Flying Dutchman: ‘the sea between the headlands must be seen to rage and foam as much as possible; the representation of the ship cannot be too naturalistic: little touches, such as the heaving of the ship when struck by an exceptionally strong wave, must be very clearly portrayed. The constant subtle changes in lighting demand especial care.’

The premiere of The Flying Dutchman in early 1843 marked the start of Wagner’s career as a mature opera composer. He had already completed three operas, namely Die Feen, Das Liebesverbot and Rienzi, but he dismissed these as apprentice works and would later reject them from his oeuvre. Indeed, in his essay ‘Eine Mittheilung an meine Freunde’ (‘A Communication to My Friends’), he identified the opera and its libretto as representing a new start for him: ‘From here begins my career as poet, and farewell to the mere concocter of opera-texts.’

The Flying Dutchman and his following two operas, Tannhäuser and Lohengrin, are commonly referred to collectively as Wagner’s ‘romantic operas’, and they display a significant advance in his handling of themes, orchestration and character development. They are the earliest works to have entered the so-called ‘Bayreuth canon’, the set of Wagner’s operas that form the core repertoire of the famous Franconian festival.

The three ‘romantic operas’ brought the composer renown and success, but they are not regarded as his masterpieces; that title is given to his ‘music dramas’ that came later, namely Der Ring des Nibelungen, Tristan und Isolde, Die Meistersinger von Nürnberg and Parsifal, in which Wagner broke new harmonic ground and strove to fuse all musical, poetic and dramatic elements into one unified artistic whole.

Fleeing the difficulties of his time in Riga and sailing off on a risky sea voyage gave Wagner not only an idea for a new opera, but also a place in Latvian and musical folklore. ‘Fleeing Riga by boat, he became stuck in time. This ship, forever stuck in this mythical time, has once again stopped where it started.’ says director Viestur Kairish, who was born in the Latvian capital. The Flying Dutchman is a work that blurs the boundary between the mythical and the real, a boundary that he has explored and embraced in Latvian National Opera’s new production. ‘Time and space – Riga. Maybe it’s the wreck of a ship washed up on some lonely beach; maybe it’s an aeroplane that has crashed in the desert. What’s important is that the Dutchman has returned to the city where Wagner went from Kapellmeister to composer.’