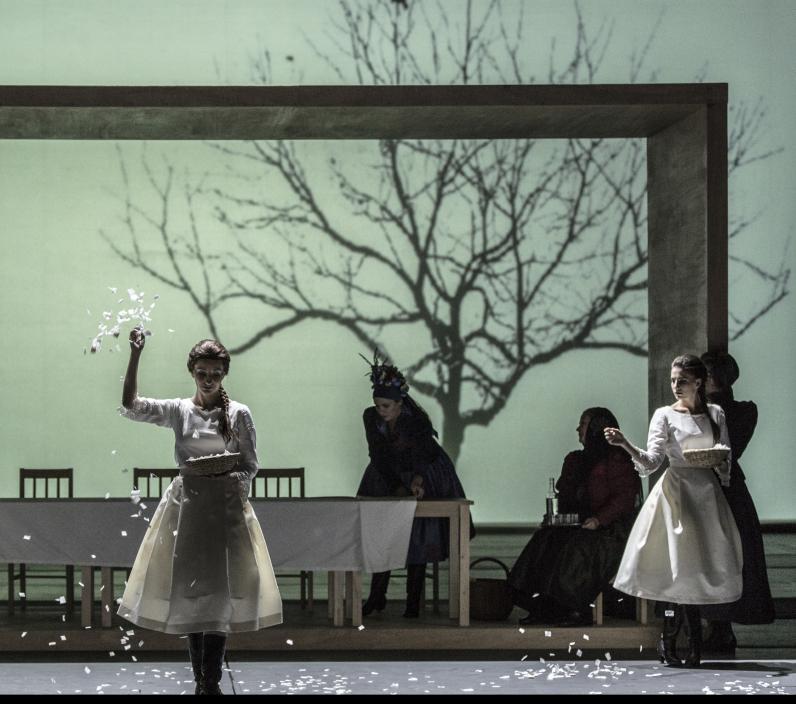 Janáček
This performance is no longer viewable as video-on-demand for rights reasons but other material about the production is still available.
Sung in
English

When a beautiful young woman in rural Moravia becomes unexpectedly pregnant, she learns that love is sometimes only skin-deep.

Janáček took Gabriela Preissová's grim tale of infanticide and redemption, and condensed it into a masterful, spine-chilling drama. The tragic plight of the protagonists is presented with unsentimental realism that cannot help but trigger a response of deep compassion. Premiered at the National Theatre in the composer's hometown of Brno 115 years ago, the opera took him nine years to complete and is the first in which his distinctive voice can clearly be heard.

Act II. Jenůfa (Pavla Vykopalová) wakes up in an empty house, her baby and stepmother nowhere to be seen. Failing to find them, she worries for her baby's safety and prays to the Virgin Mary to look over him. Conducted by Marko Ivanović and directed by Martin Glaser.

Act III. Village girls sing and dance a wedding song in honour of Jenůfa (Pavla Vykopalová). She and the Mayor (Ladislav Mlejnek) thank them, and Luca (Jaroslav Březina) asks Jenůfa's grandmother (Jitka Zerhauová) to bless their marriage. Just as Jenůfa's stepmother (Szilvia Rálik) is also about to bless them, Jana (Martina Mádlov) runs in with the terrible news that a baby has been found under the ice. Karolka (Tereza Kyzlinková) tells Števa (Tomáš Juhás) that the wedding has surely been ruined. Jenůfa recognises her little boy’s bonnet and the suspicion of murder falls upon her. The villagers call for her to be stoned but Luca vows to kill anyone who harms her. Conducted by Marko Ivanović and directed by Martin Glaser.

Act I. The recruits can be heard approaching singing this conscription song. At their head is Steva, the mill owner, who leads Jenůfa reluctantly in another dance. Conducted by Marko Ivanović and directed by Martin Glaser.

'It is clear from the piece that it is a turning point in the history in general - it is where the "traditional" concept of bel canto ends and Janáček's specific style begins,' says Marko Ivanović, the conductor of this production of Jenůfa from National Theatre Brno.

'Sometimes I wonder about what Janáček would do if he was sitting right here in our auditorium, in this very opera house which is named after him,' says Pavla Vykopalová, who plays the role of Jenůfa in this production from National Theatre Brno.

'What was interesting for us was how the dialogue involves the characters saying what they want very passionately but not actually listening to one another,' says Martin Glaser, the director of this production of Janáček's Jenůfa from National Theatre Brno.

'It is almost unbelievable how many emotions and varying perspectives on the human soul he managed to squeeze into those 90 minutes,' says Patricie Částková, dramaturge at National Theatre Brno, 'and how brilliant the brief version of the story he created is.'

Behind the scenes of Jenůfa

Hedd Thomas, OperaVision's Editorial Coordinator, visited Brno in the Czech Republic to meet the team at National Theatre Brno as they prepare for the livestream of Jenůfa. Here, he shares his thoughts about Janáček’s opera and talks about his work for OperaVision.

The beautiful Jenůfa fears that her beloved Števa has been drafted into the army. She is expecting his child and his departure would jeopardise their forthcoming marriage. Števa’s stepbrother, Laca, also carries a flame for Jenůfa and asks her about him. Števa finally arrives with his friends and musicians – he had not been drafted after all and celebrates his good fortune with drinking and dancing. Jenůfa’s strict guardian, Kostelnička, disapproves of Števa’s behaviour and that of his friends. In front of them all, she announces that she will only give her consent for a marriage between Jenůfa and Števa after a probation year, during which time Števa would not be allowed to drink. Laca convinces Jenůfa that Števa loves her only because of her beauty, and during the argument he cuts her face with a knife.

Fearing disgrace, Kostelnička has hidden Jenůfa in her home and claims to everybody that she has left for Vienna. In the meantime, Jenůfa has given birth to a son. Whilst Jenůfa is sleeping, Kostelnička humbles herself before Števa and begs him to marry Jenůfa. For Števa, however, Jenůfa’s scarred face has rendered her ugly. Besides, he is already engaged to the daughter of the Mayor. Laca arrives and asks Kostelnička to hand Jenůfa over to him. When Kostelnička lets slip that Jenůfa has given birth to Števa’s child, he is shocked. In desperation, Kostelnička lies that the child died immediately after his birth. As soon as Laca leaves, Kostelnička drowns the child in an icy river and convinces Jenůfa that she had slept for several days in a fever and the little boy had died in the meantime. The devastated Jenůfa agrees to a marriage with Laco.

During the preparations for the wedding between Jenůfa and Laca, news breaks out that a child has been found dead in the river. Jenůfa recognises her little boy’s bonnet and the suspicion of murder falls upon her. Kostelnička admits her crime in front of the assembled guests. Before the Mayor leads her off to court, Jenůfa forgives her, for she understands that she did it out of love for her. Jenůfa believes that Laca will no longer want her and sends him away. However, he still wants to stay by her side and promises that he will be with her even in the bad times. Jenůfa realises that she has found her true love ‘and God is pleased with it’.

5 things to know about Jenůfa

Jenůfa is one of Janáček’s most famous works. It has its roots in a realistic drama by Gabriela Preissová called Její pastorkyňa (‘Her Stepdaughter’), which Janáček adapted himself into the form of an opera libretto. Even though he had to shorten the text of the drama significantly, he managed to heighten the impact of this tragic story from rural Moravia.

Alongside the unfortunate heroine of the title, the characters of the opera include the wasteful and unstable Števa; the fierce Laca, who hides a heart of gold; and the unrelenting Kostelnička, whose efforts to maintain her position and respect in the village community lead her to murder Jenůfa’s child. Janáček captured the essence of each individual in a masterful, condensed drama that sends chills down the spine while simultaneously awakening within the viewer a deep sense of compassion and understanding.

It took Janáček nearly nine years to create Jenůfa. He finished the first act of the opera in 1897, while the second and the third were created under circumstances that were extremely sad for the Janáček family. In 1902, the composer’s daughter, Olga, became seriously ill during a visit to her uncle in Saint Petersburg. Janáček completed the second act of the opera after Olga’s return home, and the third immediately before her death in February 1903. He dedicated Jenůfa to the memory of his daughter.

Janáček wanted the premiere to take place at the National Theatre in Prague, but this was refused as the opera was not considered worthy of being performed on the leading Czech stage. The first performance thus took place in his hometown of Brno in January 1904, which turned out to be a big success. Jenůfa was performed there again in 1906 and 1911, and the first piano arrangement was published by the Friends of the Arts Club in 1908.

Despite Brno’s enthusiasm for the opera, Janáček thought the theatre was in such a poor condition that it was not suitable for performances of his innovative work. He repeatedly attempted to have the work accepted by the National Theatre in Prague but they always rejected it, their negative attitude being a continuous source of pain for the composer. Finally, more than a decade after the opera’s premiere, Janáček persuaded the management in the Czech capital and its conductor, Karel Kovařovic, to stage Jenůfa in May 1916. It was an unmitigated success and Janáček quickly became a celebrated composer throughout the Czech lands and abroad. 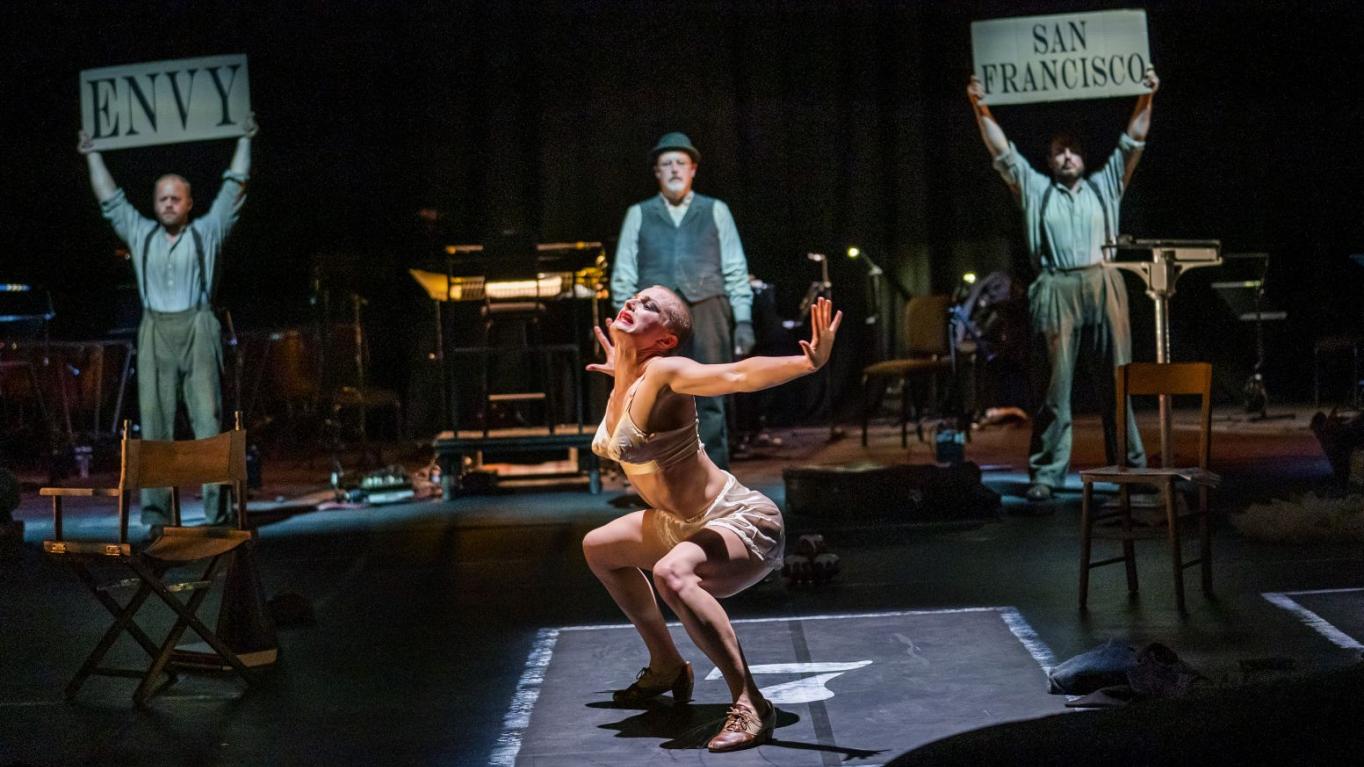 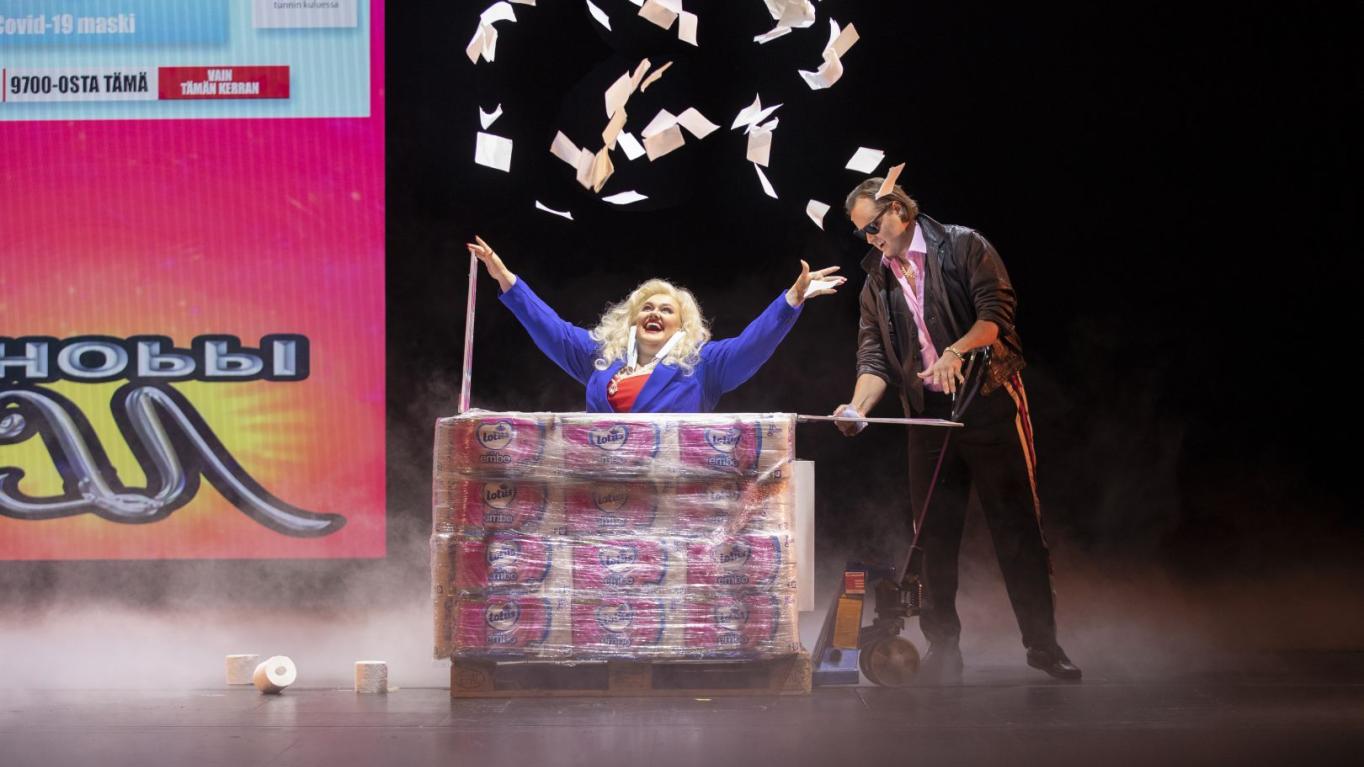 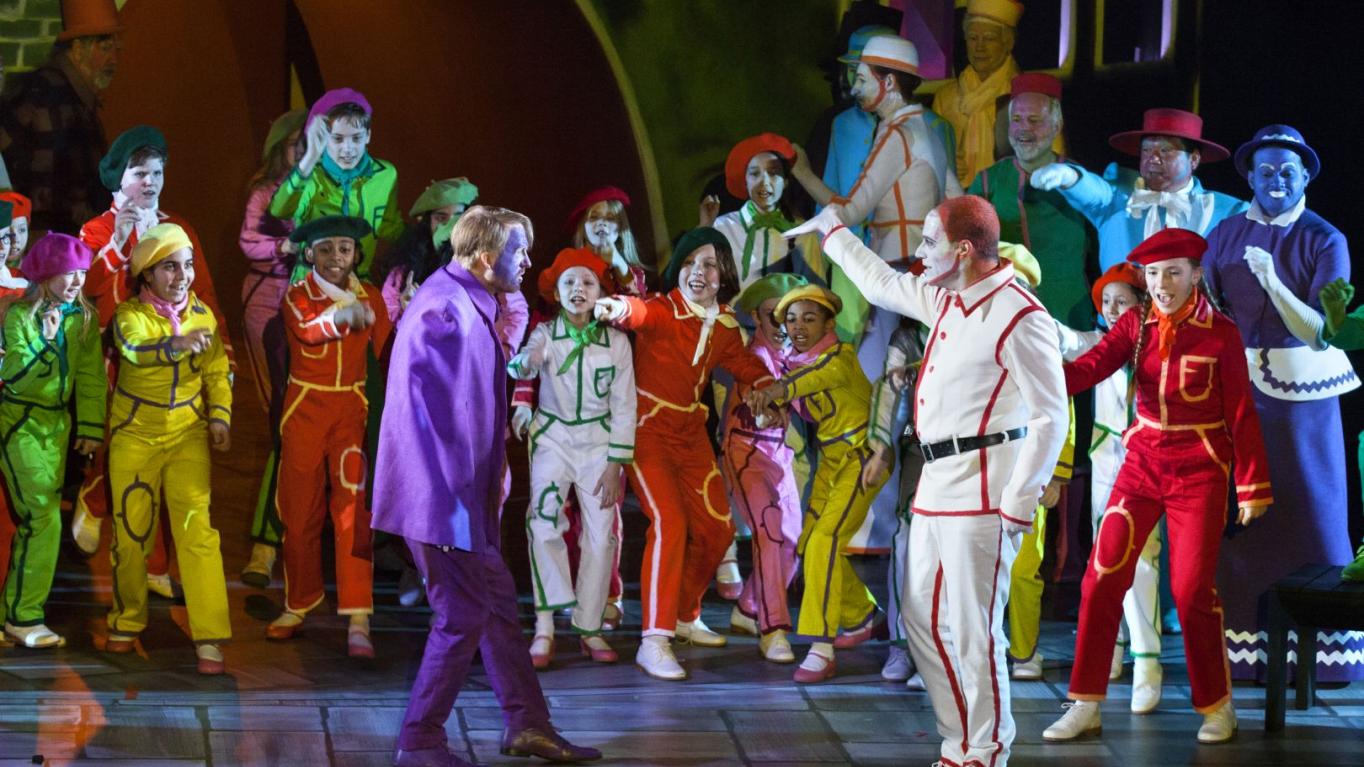 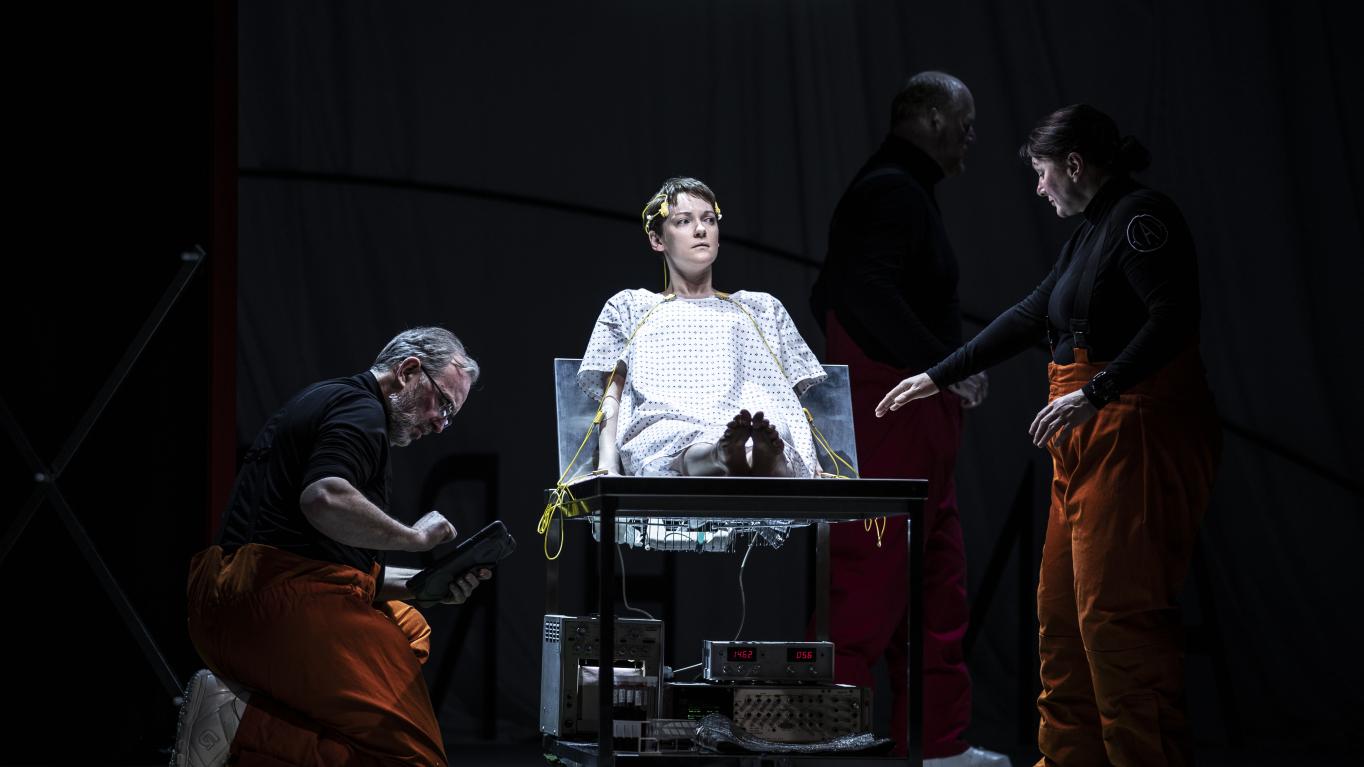 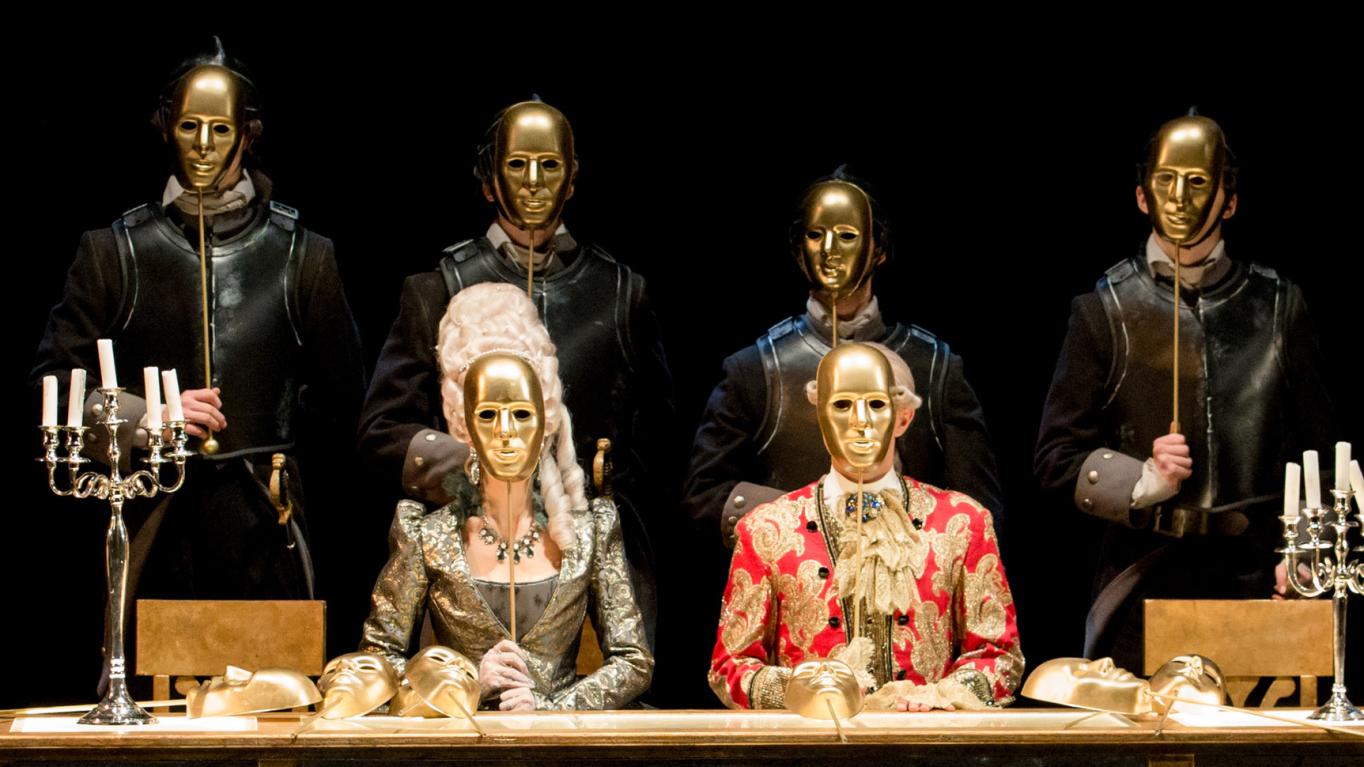