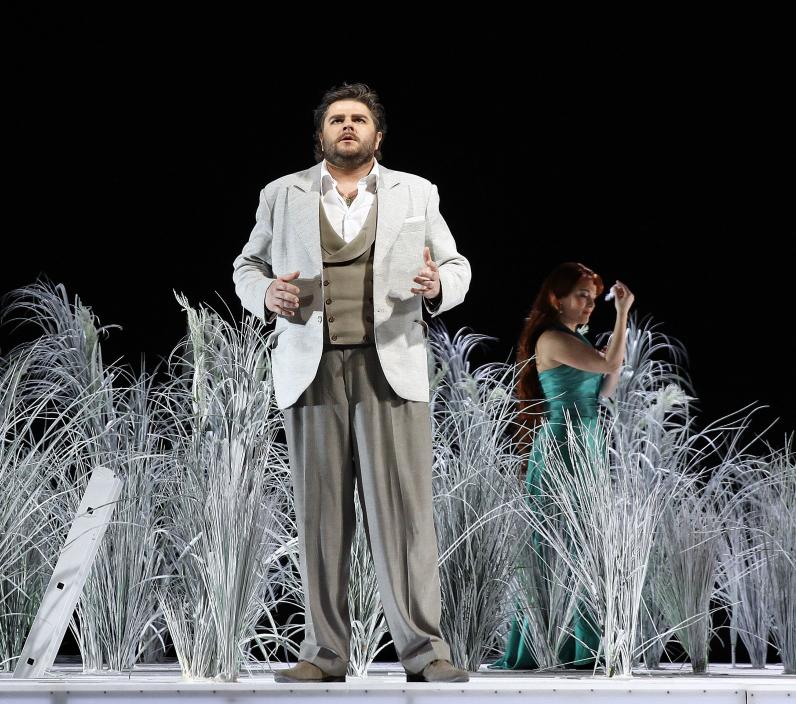 Martinů
This performance is no longer viewable as video-on-demand for rights reasons but other material about the production is still available.

Michel is looking for a woman, whose voice is the only thing he knows...

Michel Le Pic is a bookseller on the rue du Chemin-Vert in Paris. Passionate about travelling, one day he arrives in a small city in southern France where, as he strolls, he hears the love song of a woman and immediately falls in love with her. For 3 years, the memory of this young lady will haunt his dreams until the day he decides to go back to the village to find her.

But this quest will prove difficult. If the city seems unchanged at first glance, Michel soon realizes that the inhabitants behave strangely, that they have lost their memory and try to recreate their memories from the stories of the strangers they meet. Michel eventually finds the girl he seeks, Juliette. She invites him to meet her in the forest.

Michel encounters different people on his way to meet her: a palm reader who predicts the past, a merchant in the middle of the forest who tells utter nonsense and fairy tales, but whom everyone believes… When he finally finds Juliette, she welcomes him as if she had always known him. But tensions arise between them as reality and dreams intermingle, and Juliette runs away. Michel fires a shot into the forest to stop her; we can hear a cry that echoes throughout the forest. There is a search, but the sailors who went to seek her only find a veil. Is he the one who fired a shot? Michel can’t remember…

He embarks on a boat which transforms itself into a Bureau of Dreams at which everyone, for a certain fee, can choose his or her dreams. But Michel no longer dreams. He has been told again and again that his dream is over and that he has to leave. But when he decides to do so, he can hear again the voice of Juliette calling him to come back. He then goes back into his dream to try to find her again.

One day, Michel, a travelling bookseller from Paris, finds himself in a small seaport town. That evening, before returning to Paris, he strolls in its small square and hears a young woman’s song of love through an open window. After he comes back to Paris, this memory constantly recurs in his dreams, and he keeps seeking the town, the girl and the song. His desire and quest form the actual content of the opera, whose story begins at the moment when Michel “returns” to the small town. The town seems to be the same as it was previously, yet something has changed: its inhabitants behave strangely, mysteriously. They have lost their memory; they are merely able to realise the present, momentary element of their time. Michel, however, does not know about this, thus being put in situations that are ridiculous, enigmatic and tragic alike, situations that he deems to be unsubstantiated and inexplicable. Michel finally finds his Juliette, yet the situations keep repeating, and so, owing to these obscure events, the whole play is transferred into an illusion so bold that his own normal and experienced “reality” comes across as empty, pale and, in effect, illusory, whereas all these fictions, fantasies acquire the appearance of reality. Accordingly, a totally reversed ratio. Michel, who was the only one to know what he wanted and why he has come here, to this small town, himself gets slowly lost in this world, in which everything only exists for the particular moment, in which there is no past, no present, in which no one knows what will happen in the next moment nor what happened in the past moment. Situations take turns without reason and without consequence. Michel wants to go back to Paris and is told that no trains run there. “But I have arrived by train!” “No, we do not have any trains here.” A palm reader foretells the past, not the future. A wine merchant, in the middle of a forest, tells utter nonsense and fairy tales, yet everyone believes him, as it very vaguely reminds them of something, their own forgotten memories. They appropriate each and every slightest memory, which makes them happy. At night, a festivity takes place in the forest, yet no one knows when and where. Naturally, Michel can recall that as a child he had a small toy, a duck, constantly running around. In return for recollecting such a distant memory, he is appointed mayor of the town, which, none the less, all the inhabitants immediately forget.

Juliette welcomes him as though she has always known him. The love scene acquires such sharp bounces between Michel’s factuality and Juliette’s fancy that it culminates in a shot from a revolver. Michel fires at the departing Juliette, hears an outcry that echoes throughout the forest, yet he himself is no longer certain whether it was he who fired the shot. Did he kill her? He heard a shot and a cry. “Have you heard something? A shot?” – he asks the forest watchman, who answers: “Of course I have! I myself have fired at a duck; by the way, I have missed!” Desperate, Michel returns to the square, to Juliette’s house, hoping that she may be back at home. An old lady, who opens the door to him in the middle of the night, does not remember anyone living in the house besides herself. The sailors who went to seek Juliette’s body only bring back a veil. “Why have I actually come here?” Is everything the truth or but a dream? Or is everything like the postcards from Toledo and Seville that Michel and Juliette viewed in the forest, recollecting memories of cities they have never visited? “What are you doing here this late at night?” – a man asks him. “Are you perhaps the passenger from my ship?” “Yes, I am the passenger.” – Michel answers. Yet the ship transforms into a Bureau of Dreams, at which everyone, for a certain fee, can choose his or her dreams. Here is where a boy comes so as to dream about Buffalo Bill, a criminal about freedom, a beggar about a trip to the seashore, and an engine driver so as to look at a photograph of his dead little daughter in an album, in which Michel only finds blank pages. Michel is repeatedly warned that his dream is over and he has to leave. When he resolves to do so, all of a sudden he again hears Juliette’s voice, calling him back.

So he returns, tries to find her, yet his dream is finished. He meets a throng of those who have given preference to living in dreams for ever. Michel is frightened, indecisive, he keeps hearing Juliette’s voice calling him back, and is again warned by the Bureau’s clerk, prompting him to leave. “Closing time!” – the watchman announces. “Let me pass through this door for the last time, I have long been seeking someone, and today have finally found the person. She is a young woman and she is behind this door.” – Michel beseeches. “No one is there” – the watchman replies. – “You must leave.” He opens the door and his torch shines on to an empty space, yet Michel keeps hearing the voice calling him to come back, and suddenly all the memories experienced in his dream reappear. The play could start again from the beginning. The action is not rounded off, it continues – it is but a dream.