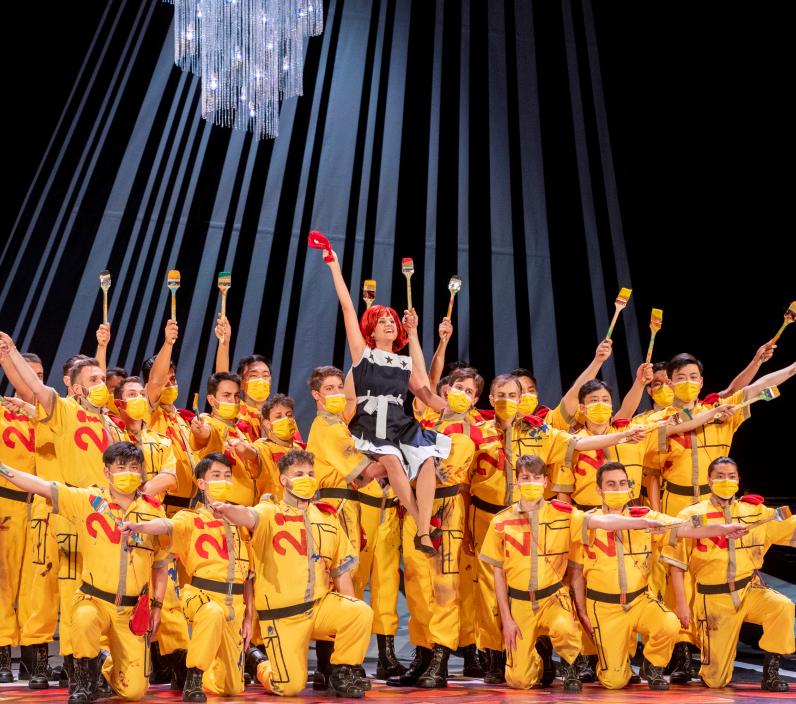 Donizetti
This performance is no longer viewable as video-on-demand for rights reasons but other material about the production is still available.
Sung in
French
Subtitles in
English
French
German
Italian
Korean

Glorious comedy and impeccable coloratura combine in Donzetti’s La fille du régiment, incarnated by Marie, the feisty tomboy raised by a regiment of French soldiers. What can stand in the path of true love for Tonio is the young Swiss villager who conquers her heart - and nails a few high Cs on the way?

Director Luis Ernesto Doñas sets the action in central America, turning the revolutionary French fighting against conservative Tyrol into the struggle for Cuban liberation. Cuba as a place where two worlds confront and clash, a colourful one projected into the future and the other in black and white locked in nostalgic feelings about the past. This production was the unequivocal success of the 2021 Festival Donizetti Bergamo in co-production with the Teatro Lirico Nacional de Cuba, where it has already made a very successful debut. The young Spanish soprano Sara Blanch plays the leading role of Marie, while the role of Tonio, with his legendary aria of at least eight high Cs, is entrusted to the renowned and charismatic American tenor John Osborn.

Colour, more colour and coloratura from Bergamo via Cuba.

This extract from La Fille du Régiment is one of the most famous tenor arias with its 9 high Cs in only 2 minutes.Here we are in Act I, the Marquise of Berkenfield discovers she is Maries’ aunt and wants to take her with her. When Marie resists, she takes out a letter from her father, claiming it as his last will. Soldiers appear and among them is Tonio (John Osborn), Marie’s sweetheart.

Behind the scenes of La fille du régiment

In this behind the scenes of La fille du régiment, we meet an Italian opera journalist, Alberto Mattioli. He introduces us to this ‘opéra comique’ premiered on 11 February 1840 at the theatre in Paris of the same name. Donizetti is described as a ‘glocal’ composer by the journalist since he is both rooted to his city Bergamo, inspiration for his scenarios, and open to international influences. Donizetti was the only Italian composer invited to write for the Opéra Comique and given the succès of the opera, and not without some envy from his French peers. The opera skilfully combines patriotic subjects with a romantic story and a happy ending!

A Napoleonic battle rages in the mountains of Tyrol. The peasants are begging for help from the Virgin Mary, while the Marquise of Berkenfield and her butler Hortensius, caught in the war while travelling, are worried about their properties. The French arrive: namely, Sulpice, a sergeant in the Twenty-first Regiment, and Marie, the sutler, an orphan girl found on the battlefield and adopted by the rough but tender soldiers who have since been her fathers. Marie loves nothing more than the music of the drum: for some days, however, she has lost her usual cheerfulness. Sulpice asks her about it: someone saw her with an unknown young man. He is a Tyrolean, she explains, who saved her from falling into a crevasse. Sulpice reminds her, however, that she can only marry a soldier of the XXI regiment. At that moment the young man, Tonio, is brought into the camp by French soldiers who have taken him for a spy and tied him up. Marie intercedes for him and Tonio decides to enlist in the army to stay close to her. The soldiers cele-brate by asking Marie to sing the regiment’s song. Left alone, Marie is joined by Tonio: they declare their love to each other. Tonio, now a soldier in the regiment, asks his fellow soldiers to marry Marie and gets their permission. The Marquise is back, asking for a pass. Her name, Berkenfield, was on some documents found on little Marie’s person. The Marquise examines them, declares that Marie is her niece and that she is to live with her at her castle. Tonio and the soldiers despair: Marie sings a tearful farewell to her friends and love.

In the castle of the Marquise, who is shocked by the soldierly ways of her niece, Marie is taking a singing lesson, but she regrets the merry songs of the regiment alongside Sulpice. But Marie is told that a husband has been chosen for her and that her guests and dreaded future mother-in-law, the Duchess of Krakenthorp, will soon arrive. How-ever, the soldiers of the Twenty-first arrive before her with Tonio, who has been made captain in the meantime. Marie and Tonio decide to flee. The Marquise confesses to Sulpice that Marie is actu-ally her daughter, born from an affair with a French officer. Marie does not want to displease her moth-er. However, when the wedding guests have gath-ered, Marie fondly remembers her childhood and life as a sutler. The aristocratic guests are appalled, but the Marquise is so moved that she goes back on the marriage agreement and blesses Marie and Tonio’s wedding. Everyone rejoices.