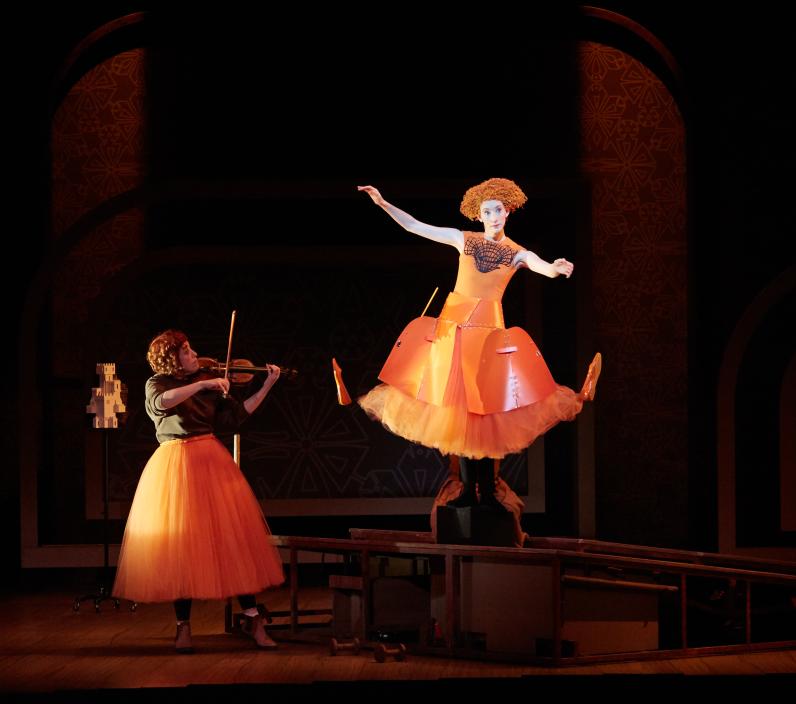 Cruz
This performance is no longer viewable as video-on-demand for rights reasons but other material about the production is still available.

Once upon a time there was a light Princess who cared not about the gravity of the adult world. Who will bring her down to earth?

How do you make the whole audience, when it gets up from its seat, feel lighter and want to run around?!" Composer Violeta Cruz and director Jos Houben have slipped into the shoes of a child while working on La Princesse Légère; a quest for the audience set out on that early journey; to find memories and live child-like again?

A king and a queen have a child after a long wait. Overjoyed to be a father, the King forgets to invite his sister, the witch Folerpès, to the newborn’s christening. To get revenge, the witch casts a spell on the infant girl: being weightless, she is carried along with the drafts. Growing up, the pretty Princess cannot help laughing at everything.

Afflicted by her lack of gravity, her parents summon the distinguished physicians Déjanthé and Malaufoi. To break the spell, she must cry. Alas, the Princess is unable to shed a single tear. During a boat ride, she falls into the lake near the castle. Since water gives her a little gravity, she spends most of her time swimming. On a summer night, a prince discovers her playing in the lake. He falls passionately in love with her. Despite her indifference to him, the Princess accepts to see him every night. The witch Folerpès then casts a spell over the lake which becomes empty.

In the workshop of the composer

The score of La Princesse légère is divided into two parts that are quite different. The first part of the score, which describes the cheerfulness and energy of the Princess when she is a child - dynamic, laughing and airy - has rhythm as a predominant character. The second part, more poetic, brings us into the feelings of the Princess as a teenager, surrounded by night and nature, and has harmony as a predominant character.

When I started music, I first learned the piano. Then the clarinet. Then I started to compose, at around 18. I always liked singing. Not opera or opéra-comique but Latin American popular songs from my country Colombia, but also from Mexico, Argentina...

In the score of La Princesse légère, there is what we call a string quintet: two violins, a viola, a cello and a double bass. The sounds of these instruments are very fine and varied. But together, they allow power and sometimes even violence. Then, I chose instruments that remind me of laughter, like the clarinet, which laughs with a classic elegance, the trombone which has a quite fat and heavy laugh, the accordion which, with its bellows, produces a more popular laugh. I also included a toy instrument from my childhood: a stick attached to a ball with a reed and  bellows (as in the accordion). When you shake it, it laughs (it's also how the Moo box works!) Finally, the flute, that brings an airy aspect in the high-pitched notes.

Generally speaking, composers begin to write their music on the piano before proceeding to orchestration. I start with singing and percussion. I create the skeleton of my music with my voice and objects that I have at hand. When I do that, I feel like I play the entire orchestra myself!

I brought together a lot of percussion instruments but I made sure that they could all be played by one single musician. Most of them are made of wood because that’s my favorite. I especially like the marimba, a xylophone of African origin which is very present in Colombia’s popular music, and which evokes water - perfect for the lake. I also like percussion without heights and no resonance. For instance, I gladly use the rattle: it has limited potential, but it still has its effect! Finally, I really like rubbed or scraped sounds, those we produce for example on a güiro, or with a pencil on the spirals of a notebook.

About objects, I use them in my music and so I add them to the instruments of the orchestra. I use two glasses of wine of different sizes, two plastic lids and two cardboard cups. This creates three small families or pairs of sounds, with two different heights each time.

Almost any object can become an instrument. The moment when the Prince cleans the shoes of the Princess is accompanied by rubbed sounds produced on polystyrene, cardboard, paper... and on a drum with a brush.

I wanted to use and develop musical forms that correspond to the moments of the story of La Princesse légère. Taking part in the writing of the libretto and the show, with my accomplices Jos, Emily and Gilles, allowed me to build the score with them, while they also reacted to my musical desires.

So, the Baby Princess and her playful spirit made me want to write a rhyme, quite identifiable. While writing this score, I allowed myself everything, even the combination of contemporary and abstract music with ancient, popular and recognizable forms.

When the King must go visit his sister the Witch but doesn’t dare, I used a rhythmic jazz base, a walking bass: by its irresistible walking movement, it highlights the blockage of the King. The vocal part, a delirium in which the King loses his words, was inspired by a wonderful improvisation performed by a singer and contrabassist I admire, Fantazio.

By taste of the popular South American song, I didn’t want only lyrical tunes, I wanted songs evoking the pleasure of singing for oneself. The song of the Princess does not offer a technical demonstration, it's like that of a little girl.

The King's sister is an androgynous character, both wise and evil, human and animal, old lady and magician. I wanted to translate these ambiguities by inventing a Witch song, which is rather a scream, a bit of an animal voice, not very human. I mixed speaking and singing, the feminine and masculine voice tones, the low and high notes. With the interpreter, who is a man, Guy-Loup Boisneau, we spent time measuring the implications of each intonation on each word!

There are still many other musical forms: choirs that express the voice of the lake, a lamento sung by the Princess when the lake dries up, a funeral march that accompanies the Prince to the sacrifice...

Make a song of laughter

This is not new: when a laugh is noisy, it is often placed like the sung voice. It is said ‘laughing at loud’ to evoke both the sound volume and the mouth wide open. Some opera composers have introduced laugh into their scores, and even composed it! The most famous laughs in opera are in the song called ‘L'Éclat de rire’ sung by Manon in the opéra-comique of the same name by Auber, and the ‘Air des bijoux’ sung by Marguerite in Faust by Gounod - the ‘Ah! I laugh at seeing myself so beautiful’ from the Castafiore...

For the laughs of the Princess as a baby, I recorded a real one-year-old baby, who laughed with great talent, Loula Bernard.

For the laughs of the Princess as a young girl, I worked with Jeanne Crousaud on a whole range of laughs more or less sung, rogues, mockers, hysterics, laughter that sometimes stems out from the end of a word, a sigh, or which turn into a figure of hopping notes on the violin. There are even two passages where the whole orchestra laughs!

With electronics, we created sounds of human laughter that become instrumental laughter.