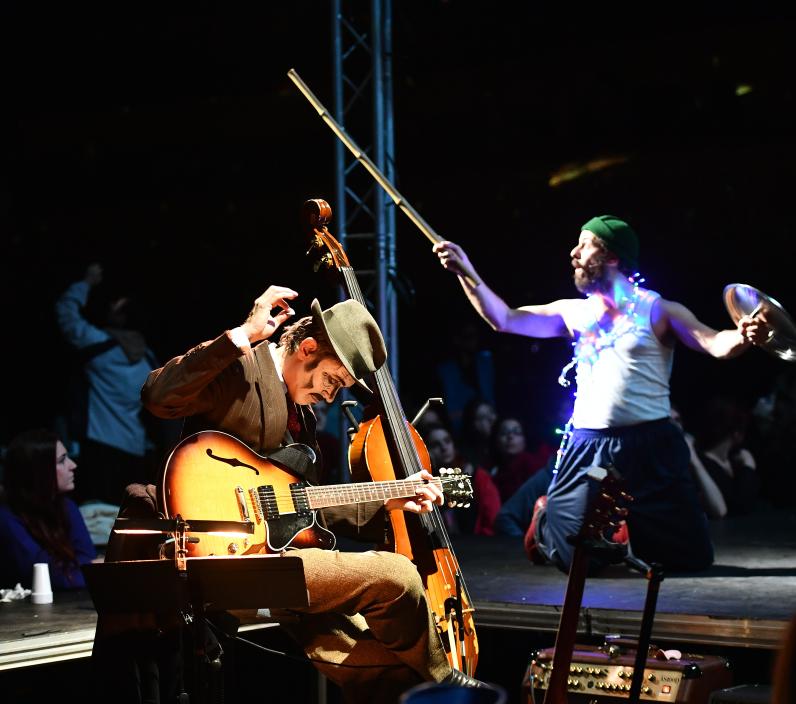 Marie-Ève Signeyrole & The Tiger Lillies
This performance is no longer viewable as video-on-demand for rights reasons but other material about the production is still available.

In a soup kitchen, the recipients take turns mocking and supporting, lying and loving each other, spicing up the reality of their lives with a pinch of fantasy.

Inspired by director Marie-Ève Signeyrole's real-life experience volunteering in a soup kitchen around Christmas, La Soupe Pop invites its audience to share a bowl of soup among the actors and singers on Montpellier's Opera Comédie stage. Halfway between theatre and cabaret, the immersive experience unfolds in a series of raw yet poetic scenes accompanied by the joyously melancholy music of British cult band The Tiger Lillies.

During the festive season, the Opéra Orchestre national Montpellier invites its public to stray outside of their comfort zone and take a long, hard look at the everyday life of people in need. On stage, the audience shares a bowl of soup with actors and singers and listens as they reenact the true stories from a real soup kitchen. Rubbing shoulders with these stand-in volunteers and recipients, the public discovers a burlesque theatrical UFO, halfway between performance and documentary - and embark on an evening that is both hilarious and tragic, but always touching.

The Tiger Lillies comment the action on stage in waltzes, tangos, songs from their repertoire and four original creations composed especially for this production.

Three years ago, at Christmas time, I wanted to make myself useful. I went to the soup kitchen in my neighbourhood. The manager explained to me that it was too late to be a volunteer, that being a volunteer couldn't be improvised. As I couldn't serve the soup, I was advised to stay and talk to people. So I came back the next evening, this time accompanied. Evening after evening, we started talking with the volunteers and beneficiaries. We understood that talking was almost as important as eating, as was having a meeting somewhere with someone every day at a fixed time. In this respect, the soup is also a welcome response to loneliness. The stories we collected night after night became the raw material for this performance.

Among the various soup kitchens we observed in Paris, one in particular caught our attention: in the open air, in front of a church. Obviously, the volunteers of this soup kitchen were all members of the community of this parish. There was an interesting relationship between the religious aspect and volunteering. We had the desire to discover the stage of the Comédie (translator’s note: the historic opera house in Montpellier) to embody this 'open-air chapel'. The more time we spent with the beneficiaries of this soup kitchen, the more we got to know them, the more we wondered: the downward social mobility that had hit the beneficiaries of this soup, couldn't it hit us too? I think that the idea of making a participative, immersive show, where the audience would meet on the set to share a bowl of soup among the actors, was born from there.

Some scenes in the show may seem violent. I don't think that violence is specific to the street. Sexist and homophobic comments are also very present today in the political discourse in the national assembly... In this festive season, it may seem paradoxical to present a rather dark and ironic show. Just as a soup kitchen is a response to poverty and loneliness, theatre is a response to the violence of today's society, a resistance to oblivion. At no time should we confuse our position as artist or spectator with the position of those we met in these soup kitchens. But through emotion, words, music, theatre also offers us the possibility to question ourselves again about these everyday situations that we no longer see. 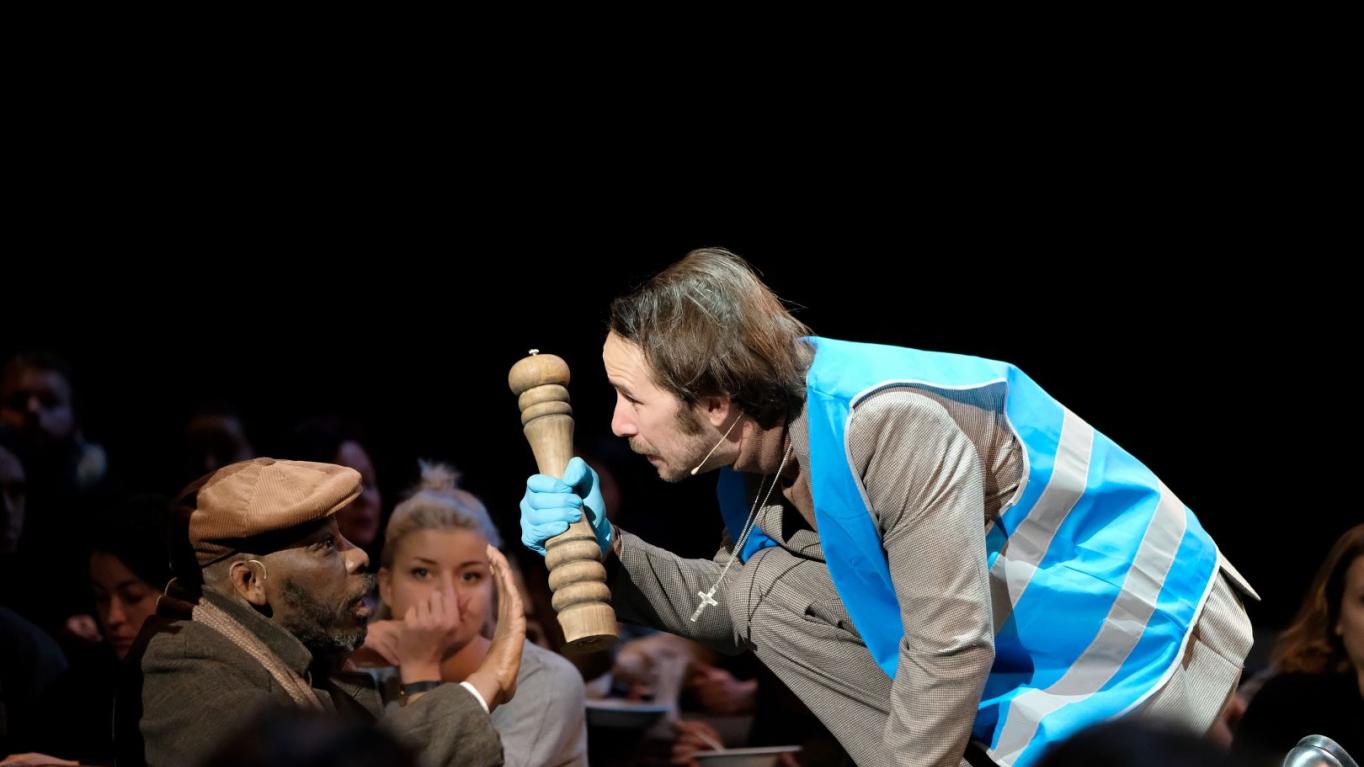 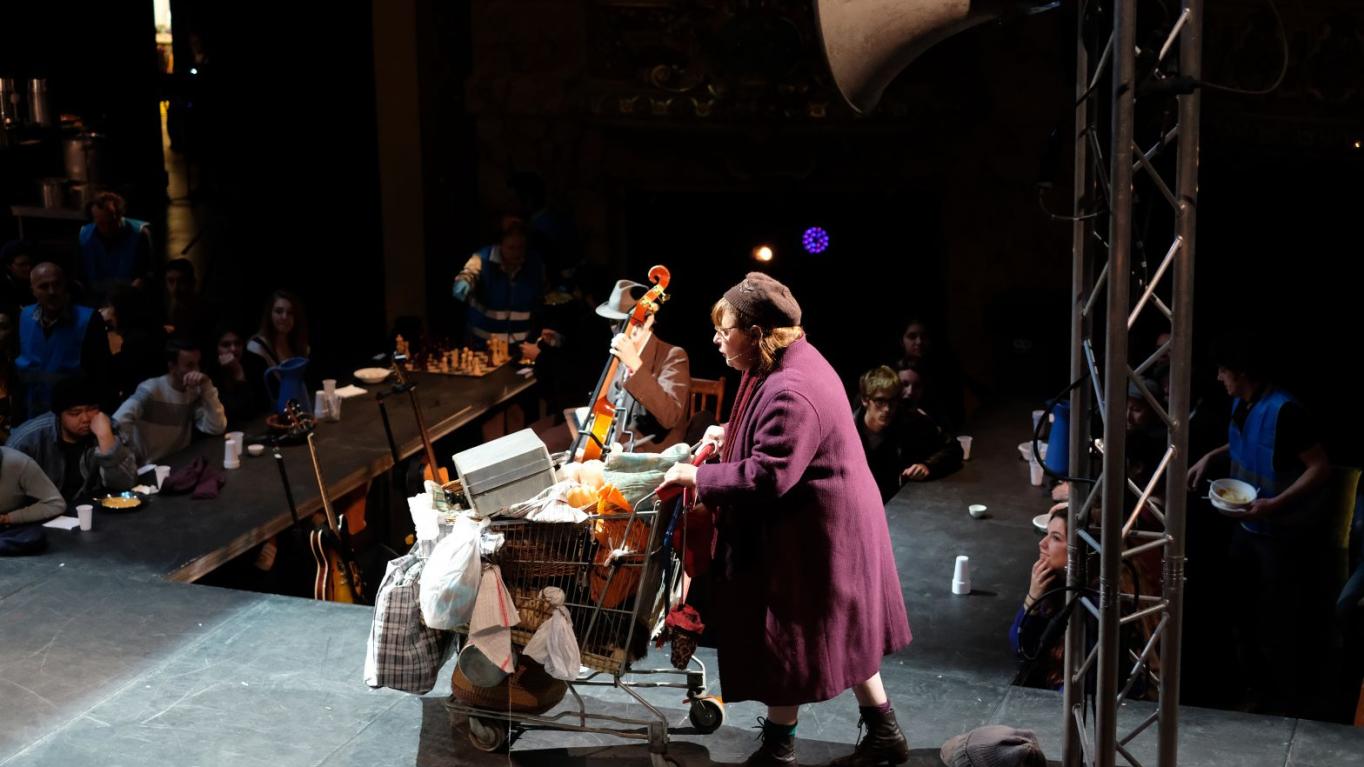 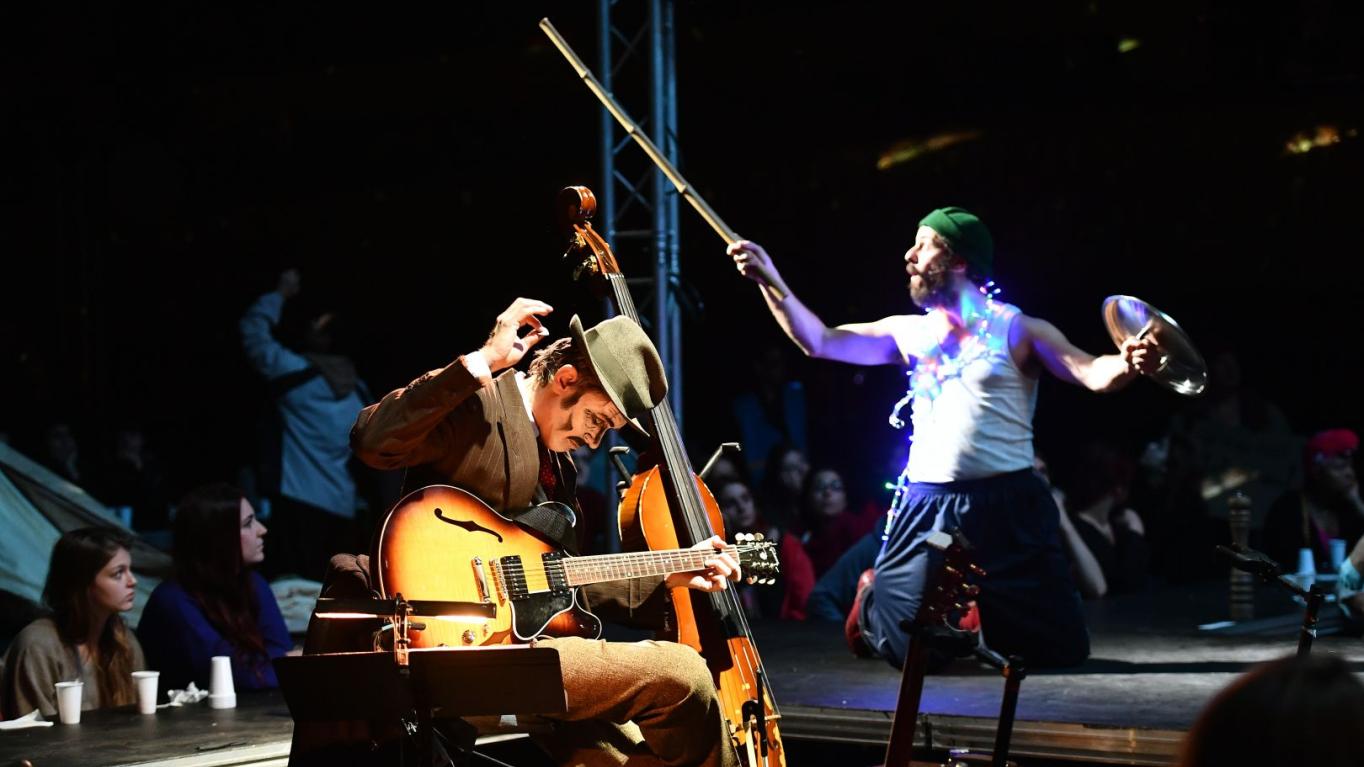 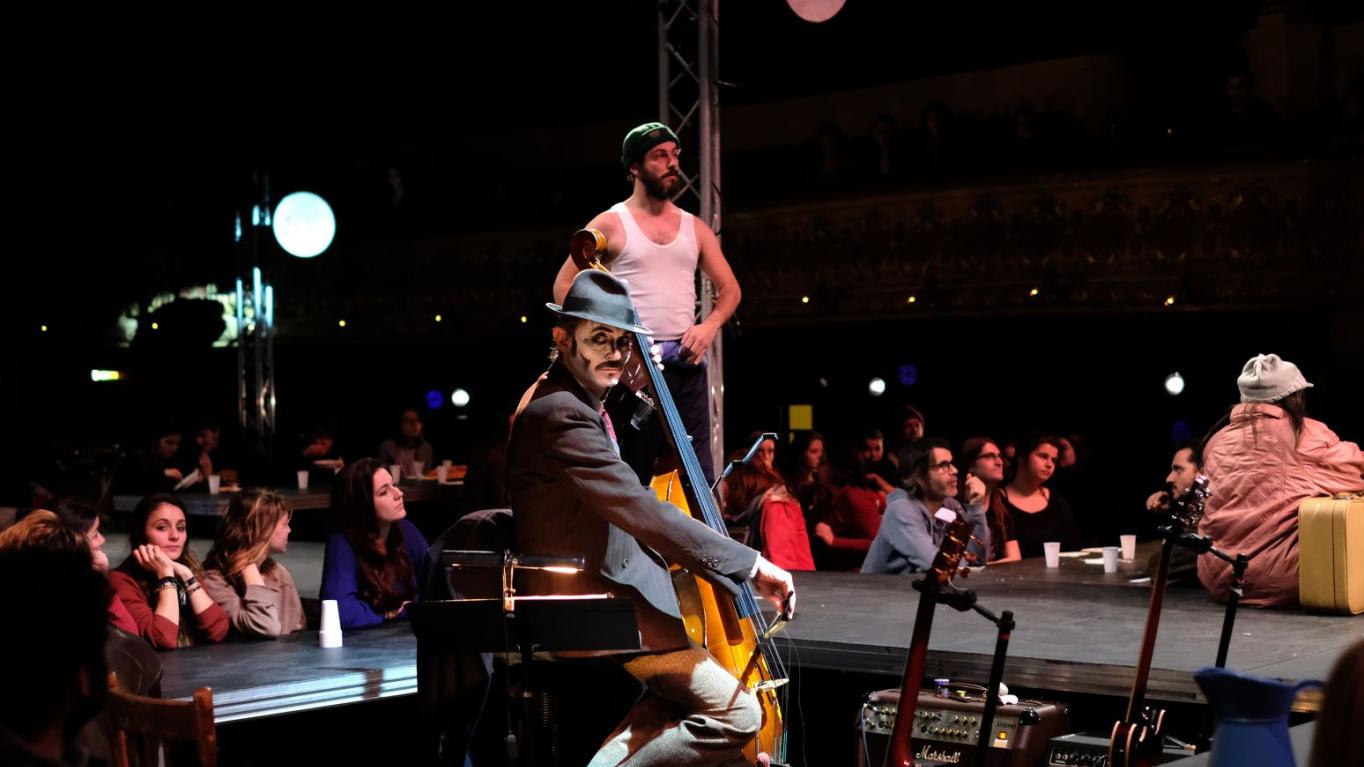 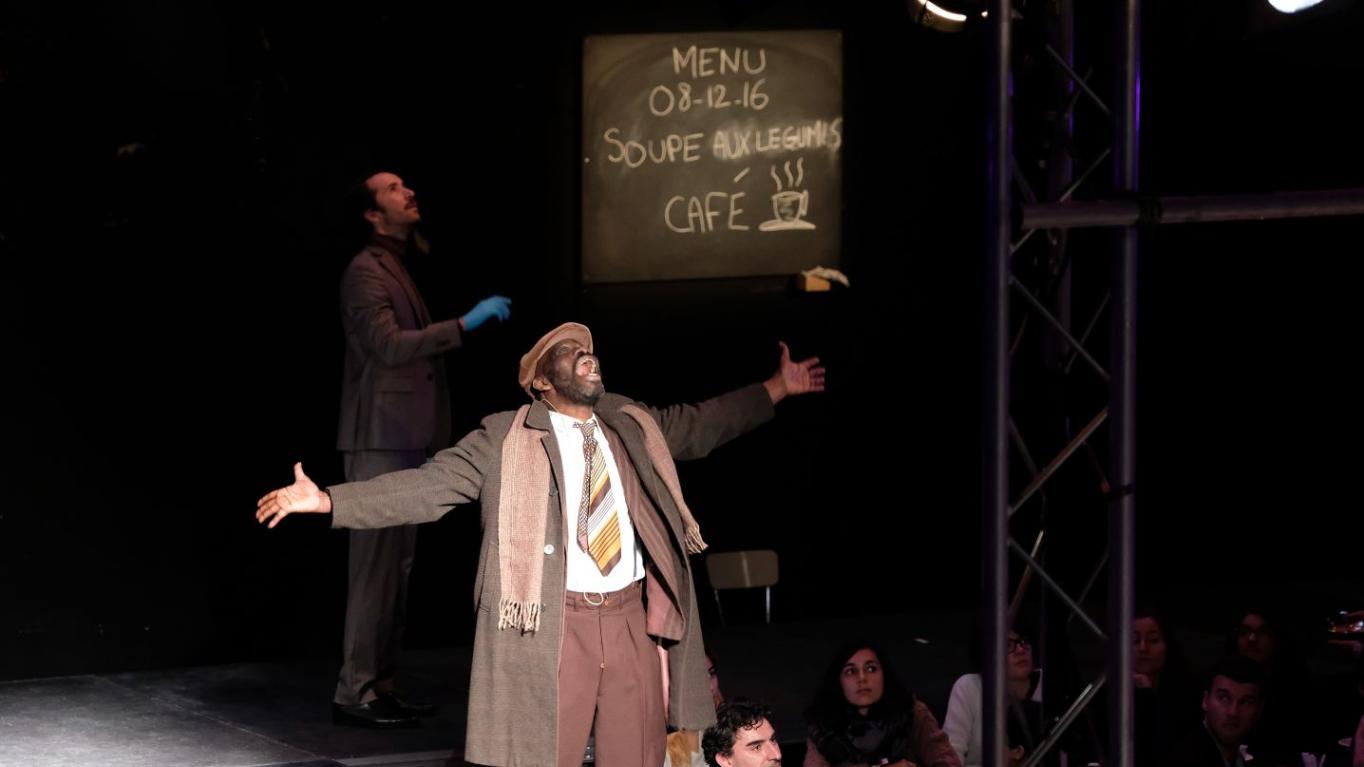 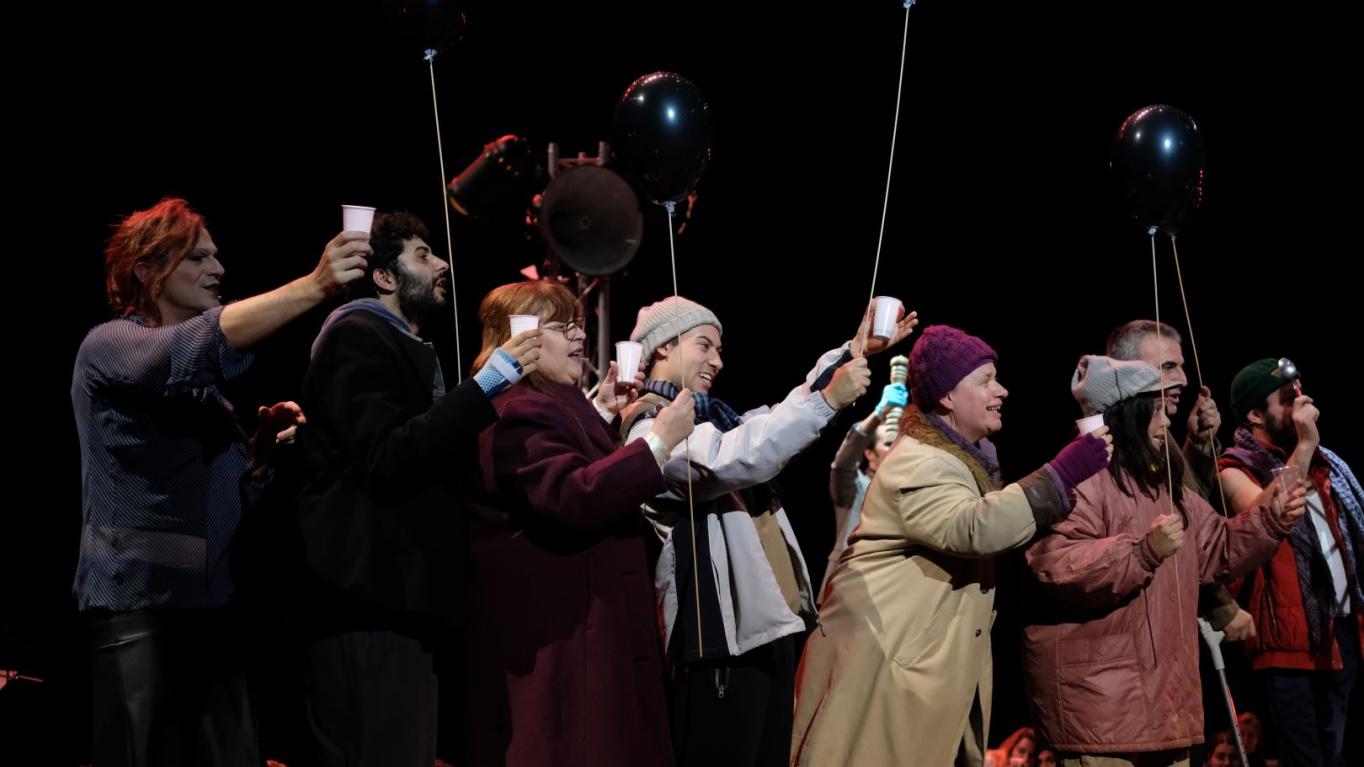