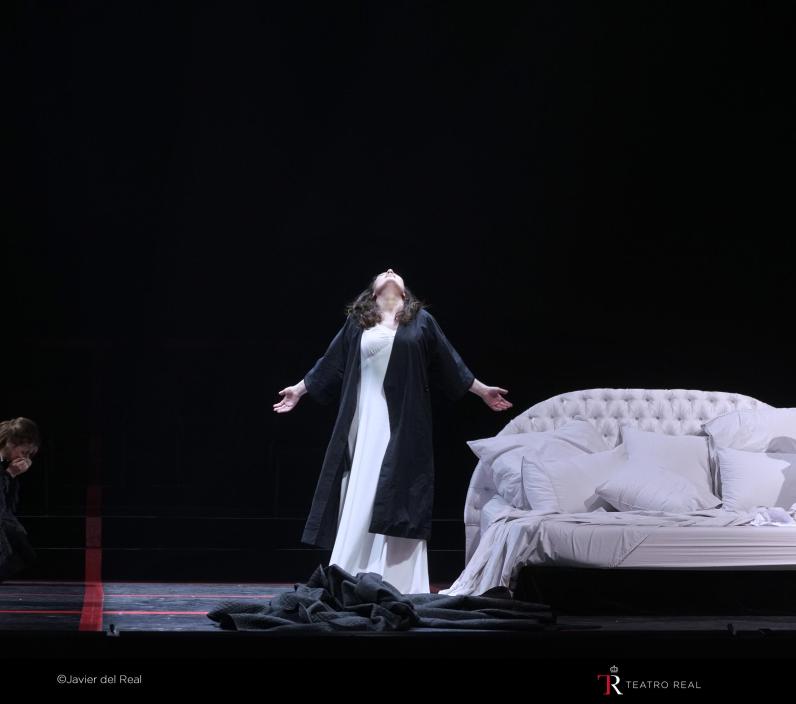 Time is running out for Violetta. Her illness is relentless, as are her feelings for her young admirer. As her past as a Parisian courtesan catches up with her, his provincial family is determined to break up their scandalous affair.

Verdi’s La traviata is without a doubt one of the most moving stories in the operatic canon. Teatro Real’s semi-staged concert version recorded in July was one of the first productions to be put on worldwide after the lockdown. The ambitious undertaking weaves reality into its staging concept and features a spectacular cast led by Marina Rebeka, Michael Fabiano and Artur Ruciński.

The guests have now all left the party, leaving Violetta alone with her thoughts in her large Parisian salon. The courtesan is shaken by Alfredo's declaration of love. Is true love a possibility? Is she ready to leave her 'life of empty distractions'? 'Sempre libera' ('Always free') concludes the first act of La traviata.

Marina Rebeka is Violetta in this semi-staged concert version of Verdi's masterpiece. Recorded in July 2020 at Teatro Real, this production is one of the first to be put on worldwide after the lockdown.

'La traviata is a 150 year-old-miracle and yet, despite her age, she is still a little girl.' Conductor Nicola Luisotti reflects on Teatro Real's production of La traviata, which marks its return to the stage after the lockdown in spring. To Luisotti, the opera tells a timeless story of two young people separated by a distance. If originally this distance was social, our current situation of physical distance conveys a similar feeling.

In her salon, the courtesan Violetta Valéry welcomes guests to her home, among them Flora Bervoix, Marquis d’Obigny, Baron Douphol and Gastone, who introduces a new admirer, Alfredo Germont. The latter, confessing that he has adored Violetta from afar, offers a toast at her request and she joins him in the salute to pleasure. As her guests move into the ballroom, Violetta, suddenly feeling faint, remains behind. Alfredo returns, concerned about her, and ardently declares his love. At first, Violetta protests that love means nothing to her, but Alfredo’s sincerity touches her, and she gives him a camellia, her symbol, promising that he may return to see her when the flower has withered. After her guests have gone, Violetta wonders if Alfredo could be the man to fulfill her dream of love. As she ponders her need for freedom, Alfredo’s voice is heard outside, arguing in favour of romance.

Some months later, in a house far from the city, where he now lives with Violetta, Alfredo muses upon his contentment. When the maid, Annina, reveals that Violetta has been selling her jewels to pay their expenses, Alfredo departs for the city to settle their affairs at his own cost. Violetta comes looking for him and finds an invitation from Flora to a party that night. She puts it aside, having no desire to resume her former life. Alfredo’s father appears unexpectedly, demanding that Violetta renounce his son; the scandal of Alfredo’s liaison threatens his sister’s engagement. Violetta at first refuses, but when Germont suggests that the fleeting charm of youth are her sole appeal for Alfredo, she agrees to make the sacrifice. After Germont departs, Violetta sends a message accepting Flora’s invitation, then begins a farewell note to Alfredo. He enters suddenly, surprising her; hiding the note, she tearfully reaffirms her love before rushing away. Before long, a messenger brings her letter to Alfredo. Germont returns to console his despairing son with recollections of their earlier family life. But Alfredo, seeing Flora’s invitation, concludes that Violetta has abandoned him for another lover and determines to confront her.

At her soirée, Flora learns from the Marquis that Violetta and Alfredo have parted. The floor is cleared for the guests and dancers dressed as bullfighters, who sing of a matador and his coy sweetheart. Soon Alfredo arrives, making bitter comments about love and gambling recklessly. Violetta, nervous and pale, enters on the arm of her old admirer, Baron Douphol, who proceeds to lose a small fortune to Alfredo. When the guests file into an adjoining room for supper, Violetta intercepts Alfredo, imploring him to leave before he further angers the baron. Misunderstanding her apprehension, he demands that she admits that she loves Douphol. Bound by her promise to Germont, she pretends she does. Mad with jealousy, Alfredo calls the other guests as witnesses, then denounces Violetta and throws his winnings at her feet. As the guests rebuke him and Douphol challenges him to a duel, Germont enters and berates his son, who is stricken with remorse.

Violetta is dying of consumption. Dr. Grenville tells Annina her mistress has not long to live. When she awakens, Violetta rereads a letter from Germont telling her the baron was only wounded in his duel with Alfredo, who knows of her sacrifice and is on his way to ask her pardon. Sensing that it is too late, Violetta bids farewell to her past. Party revellers pass by outside as Alfredo arrives. The lovers ecstatically plan to leave the town forever. Germont comes in with the doctor just before Violetta is seized with a last resurgence of strength. Crying out that she feels life returning, she falls dead.

5 things to know about La traviata

1° The toast of Paris

Marie Duplessis was born Alphonsine Rose Plessis in 1824 in Normandy. She moved to Paris at the age of 15 and found work in a dress shop but quickly became aware that prominent and wealthy men found her attractive and enchanting. She became a courtesan and added the faux noble ‘Du’ to her name. She learned to read and write, gaining a reputation as an intelligent, discreet and witty lover. Marie Duplessis died of tuberculosis at the age of 23 and her funeral in Montmartre Cemetery in Paris was attended by hundreds of people.

One of Duplessis’ many lovers was Alexandre Dumas fils. The son of Alexandre Dumas père – author of The Three Musketeers and other classic works – Dumas fils was the same age as Duplessis and an aspiring novelist and playwright when he met the famed courtesan in Paris in 1844. Their brief relationship inspired him to write La Dame aux Camélias, which was published less than a year after Duplessis’ death. The semi-autobiographical novel tells the tragic love story between fictional characters Marguerite Gautier, a demi-mondaine suffering from consumption, and Armand Duval, a young bourgeois. Marguerite is nicknamed 'the lady of the camellias' because while she is menstruating and unavailable for making love she wears a red camellia, and when she is available to her lovers she wears a white one.

3° A visit to the theatre

Giuseppe Verdi’s family situation was not dissimilar to Duval’s. His partner was the soprano Giuseppina Strepponi, the mother of at least four illegitimate children. The couple’s unmarried relationship scandalised Verdi’s parents and neighbours in his hometown of Busseto. In the winter of 1851-52, the pair decided to go to Paris. There, they attended a performance of La Dame aux Camélias, which Dumas had adapted for the stage. Verdi knew that the play would be the ideal subject for an opera and immediately began to compose music for what would later become La traviata.

Verdi engaged Francesco Maria Piave to write the new libretto and sent the synopsis to Teatro La Fenice in Venice under the provisional title Amore e morte. He was concerned about the city’s censors. Even though La Dame aux Camélias had been an enormous success, its themes were highly scandalous for the time. Verdi was told that because of its risqué subject matter, his new work could not be performed in modern dress and had to be set two centuries in the past.

Inevitably, the opera’s premiere turned into a scandal, making it into a must-see. Other opera houses around Europe would quickly take it up. La traviata exposed an open wound of hypocrisy, misogyny and sexual politics at the heart of society. Censors and critics were scornful of the way it which it treated Violetta with pity rather than contempt, but its tragic domestic story and unforgettable music made it a hit with audiences. Today, it is the most performed opera in the world and one of the cornerstones of the operatic repertoire.

With this history in mind, it is not surprising that Teatro Real opened with La traviata in one of the very first performances worldwide after the lockdown. Assembling four impressive alternating casts, it began a month-long run of nightly performances in strict compliance with health regulations. Latvian soprano Marina Rebeka did not hesitate one moment to perform Violetta on the opening night. After months of inactivity ‘nothing can be so beautiful and so fulfilling as singing La traviata on the stage to a live audience.’

Since the opera deals with a contagious disease, the parallels to the present are easy to perceive in Leo Castaldi's careful staging, despite the costumes and props, which recall the mid-20th century. ‘Dying in the third act is much more intense,’ Rebeka reflected, ‘as the sickness has the same symptoms as COVID-19, so suffocation, pain, agony, fever - all this must be present and real’. Having to keep two meters apart, the performers had to tap into different ways to express their feelings to the audience. For Michael Fabiano, who plays Alfredo, the social distancing adds particular pathos to the staging. While ordinarily he would rush to his lover’s side, when he sees Violetta at the end ‘she raises her hands to keep me away! It’s gut wrenching.’