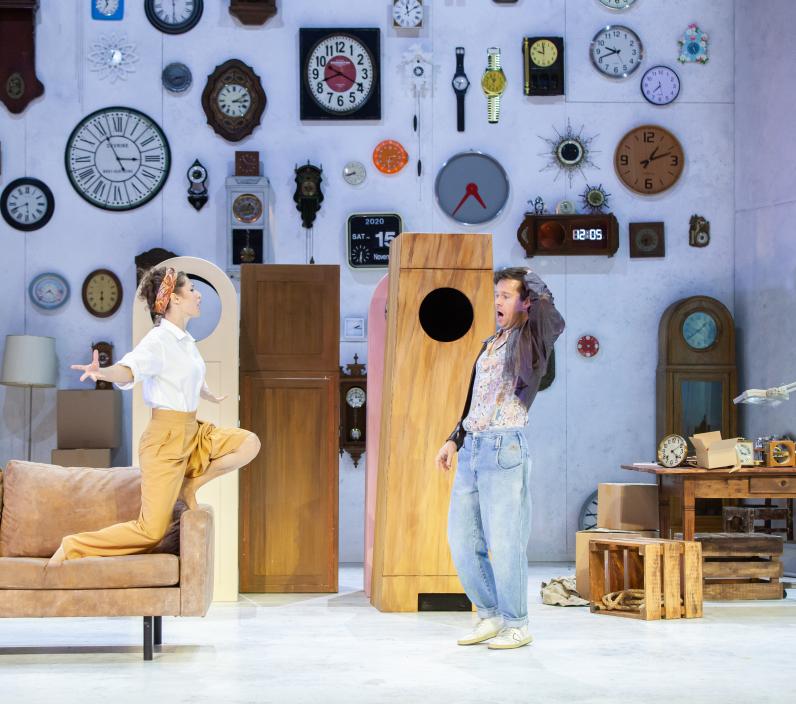 Poulenc & Ravel
This performance is no longer viewable as video-on-demand for rights reasons but other material about the production is still available.

A woman calls her ex-lover, unable to let go of him. She flatters, despairs and blackmails in the hope that he will not hang up the phone. / The clockmaker’s wife takes advantage of her husband’s absence to receive her lovers.

In Opera Zuid's double bill of 20th century French masterpieces, everything revolves around the female protagonists and their emotional development. The one-act operas La Voix humaine (Francis Poulenc) and L'Heure espagnole (Maurice Ravel), each lasting less than an hour, present themselves as two sides of the same coin united by the same longing for connection to another human being.

When Torquemada, the old watchmaker, leaves his workshop to check on the city clock, his young wife, Concepción, is visited by three different men courting her. In a (comical) attempt to avoid each other, two of these men, Don Inigo Gomez and Gonzalve, hide in a set of large clocks. When Gonzalve decides to leave his clock, he boldly starts singing the farewell aria 'Adieu, cellule, adieu, donjon', only to discover that Torquemada is right outside the door...

Behind the scenes at Opera Zuid, director Béatrice Lachaussée and conductor Karel Deseure reflect on the shared search for connection between the women of the one-act operas La Voix humaine (Francis Poulenc) and L'Heure espagnole (Maurice Ravel).

'Elle' (she) is alone in her apartment, waiting for a phone call from her ex-lover. They have only recently broken off their relationship. Several mistaken calls are received, but finally the ex-lover rings through. Elle recounts to him the events of her past evening and day, but she clearly conceals the emotional truth, she feigns a calm and collected veneer as she asks him if he would like to pick up his things - they speak about their past happiness, and her acceptance of his other relationships.

Their conversation is riddled with interruptions and dropped connections. She attempts to find his whereabouts, but when she calls his home, she discovers he is not there. This confirms her suspicions that he has moved on with his other lover.

When he calls again and reaches her, she keeps up the pretence of being fine, until despair and desperation overcome her and she confesses that she attempted suicide the night before, only saved by her doctor.

The rest of the call continues with interruptions, and bit by bit, she pieces together the  growing realisation that her lover has moved on and left her behind to deal with her emotional loss. Her anguish and resignation build until, in a final gesture, she says goodbye and expresses her love for him one last time and asks her friend to quickly end the connection.

Clockmaker Torquemada is at work in his shop when Ramiro comes by to get his watch repaired to fulfill his duties with the city mail. Since it is Thursday, the day that Torquemada checks the city clocks, Ramiro has to wait until he returns. Ramiro is unaware that Torquemada’s wife, Concepción, always receives her lovers during her husband’s absence. In an attempt to get rid of Ramiro, she asks him to move a grandfather clock into her bedroom.

Her first lover, the poet and student Gonzalve arrives, and to Concepción’s dismay, he is inspired to make poetry not love. When Ramiro returns from the bedroom, she sends him upstairs again, with an excuse of choosing the wrong clock, and hides Gonzalve in a second clock. Ramiro obliges to carry her lover upstairs unseen. Don Iñigo, the banker second adorer of Concepción, arrives and also hides in the clock. When Ramiro returns, Concepción asks him to carry the clock with Gonzalve upstairs and accompanies him.

Ramiro returns and is completely at a loss to explain the behaviour of women. As Concepción juggles the trysts with her two lovers, she creates a myriad of excuses and fabrications to make use of Ramiro’s brute strength, and he in turn obliges by carrying her hidden lovers up and down. Concepción is becoming impressed by the ease with which Ramiro carries the ‘heavy’ clocks upstairs.

Torquemada returns from his municipal duties. He discovers Gonzalve and Don Iñigo in their respective clocks and asks in amazement what they are doing. They claim to be inspecting the timepieces, and to save face, they each buy a clock. Concepción is now without any clock, but she chooses instead to wait for Ramiro to reappear when he orders the post. Finally, all sing the moral of the story: there is always an opportunity for love to thrive, especially when there is a Ramiro.

‘We go crazy when the connection is broken’

Director Béatrice Lachaussée and conductor Karel Deseure on how we tick, talking to the void on the phone and tyrannical technology.

What kind of plays are they, the one-act plays La Voix humaine and L’Heure espagnole? And what do they have to do with each other?

Béatrice Lachaussée: There is a strong similarity, even though they seem so different. Central to both is the strong longing for something that is experienced as a lack. That seems to be the fate of everyone. We are always looking for something we don't have. In La Voix humaine, it is the Woman's last telephone conversation with her love partner, who has just broken up with her. The characters are forced to look for ways to live with this loss.

In L’Heure espagnole, a woman searches for compensation for the loss of her married life. It is not necessarily an unhappy marriage, nor is it primarily about having extramarital affairs. For me, it is about being able to come back to life. It's more like an identity crisis. The woman, Concepción, is looking for who she is and what she really wants. All those men around her stand for certain qualities. At the end, she actually chooses the most simple one. It is a playful and comical opera, but there are deeper layers hidden underneath.

Karel Deseure: I agree. L’Heure espagnole is also a comic relief after La Voix humaine. But Ravel's music always has a dark side. The characters of L’Heure espagnole are archetypes and it is by no means just an opera buffa, as Ravel himself called it. The pieces balance and influence each other.

Ravel is known as a Swiss watchmaker. In L’Heure espagnole, there are countless clocks and mechanisms. Aren't the characters also a kind of clock, ticking as nature dictates? In La Voix humaine, it is the telephone. We now live in a technical social media world. How do we see that on stage?

KD: It has become a dilemma to live with the technology of social media. With the frequent use of algorithms, the question is whether we still act out of free will or are manipulated. The computer thinks for you. And in La Voix humaine the technology, the telephone, clearly leads away from humanity.

BL: When Poulenc wrote La Voix humaine, there were still telephone exchanges where female employees had to transfer you manually to the desired number. I thought it was important to translate that into our time and to connect it to our own obsession with the mobile phone. We go completely crazy when the connection is broken. The mobile phone is like an extension of your body, almost literally a part of your hand.

The clocks in L’Heure espagnole naturally represent a part of our inner self. We can think of a woman's biological clock, but also more psychological: how do we actually 'tick'...? We all have our past. The piece is also very funny, like the flywheels Charlie Chaplin got into in Modern Times.

KD: Absolutely! The text of La Voix humaine, written by Jean Cocteau, is almost a hundred years old and yet it has not aged in any way. In terms of love too, we haven't changed that much.

A lot of relationships have ended on WhatsApp....

BL: On a phone, we talk to an invisible person. In La Voix humaine, you often have the impression that the woman is talking to a mirror, into the void actually. Technology can be tyrannical. You always have to be available. By always having to be in touch with the outside world, you lose the connection with yourself. The Woman gave everything for her love and she sacrificed a lot. When at the end of the play the connection is broken for the last time, the relationship dies. Often the play ends with a suicide and it is true that a part of herself has died and maybe she wants to die too. But she is not committing suicide. Something has to die to make room for something else.

KD: She also says: ‘We only had to look at each other and we understood each other.’ And then that loneliness of the isolated phone line. That is so cruel: she has contact but there is an impossibility of real human contact.