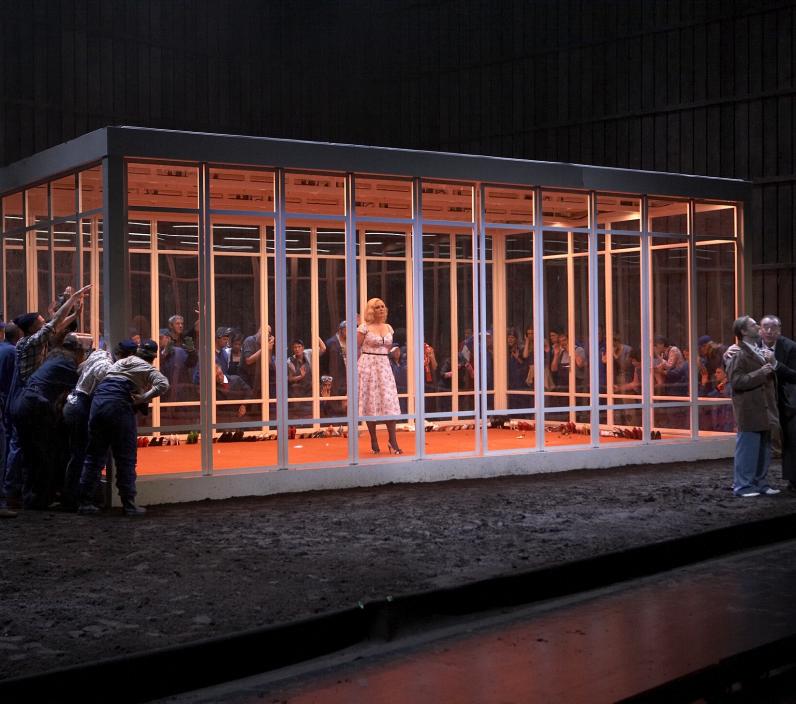 Shostakovich
This performance is no longer viewable as video-on-demand for rights reasons but other material about the production is still available.

A bored, unhappily married woman dreams of love and of starting anew elsewhere. When she starts an affair with a rakish farmhand, her passion pushes her to crime...

Shostakovich’s considered his second opera a ‘tragedy-satire’. In turns grotesque, gloomy and sexually explicit, it has the dubious honour of having shocked Stalin enough to see him walk out before the final scene. If the musical modernism and brute force of Lady Macbeth still assault the ear eighty years after its premiere, the heroine - powerfully incarnated by Dutch soprano Eva-Maria Westbroek -  is granted music of incendiary lyricism and heartfelt emotion.

The foal runs after the filly

Act I. Katerina (Eva-Maria Westbroek) is unhappily married to the merchant Zinovi Izmajlov and terribly bored. She dreams of love and of starting anew elsewhere. Conducted by Mariss Jansons and directed by Martin Kusej.

Act IV. Sergey (Christopher Ventris) no longer cares for Katerina (Eva-Maria Westbroek) and tries to seduce Sonyetka (Lani Poulson), a younger prisoner. As a gift for Sonyetka, he manages to get Katerina to take off a pair of stockings with an excuse. Conducted by Mariss Jansons and directed by Martin Kusej.

Katerina is unhappily married to the merchant Zinovi Izmajlov and terribly bored. Her father-in-law Boris Izmajlov criticises her every move. When Zinovi has to travel for a few days, Boris forces Katerina to swear allegiance to her husband. Sergey, a handsome young worker, besieges the girl Aksinja with a number of colleagues. Katerina reprimands the men, and Sergey challenges her to a wrestling match. Just when he has forced her to the ground, Boris catches them and chases the two apart. Under the pretext of wanting to borrow a book, Sergey knocks at Katerina's door at night and seduces her.

Unable to sleep, Boris sees Sergey leaving Katerina's room through the window. He gives him a beating and has him locked up. Then he orders Katerina to prepare something to eat for him. She obeys but adds rat poison. Soon the old man is convulsing. Katerina takes his keys and frees Sergey. As Katerina and Sergey share the conjugal bed, Boris's ghost appears in the bedroom every night. Zinovi returns; he has already heard everything and interrogates Katerina. When he hits her with Sergey's belt, she calls her lover and together they strangle Zinovi. They hide the body in the cellar.

While Katerina and Sergey have their marriage blessed, one of the workers goes to the cellar, looking for liquor. He breaks open the door, finds Zinovi's body and warns the police. The chief of police is happy with the news because he feels insulted as Katerina did not invite him to the wedding. At the end of the party, Katerina discovers that the cellar door has been broken open. The police arrive when she and Sergey are about to flee. Katerina confesses and both are arrested.

The lovers are put on a transport to Siberia with other forced labourers. Sergey no longer cares for Katerina and tries to seduce Sonyetka, a younger prisoner. As a gift for Sonyetka, he manages to get Katerina to take off a pair of stockings with an excuse. When she finds out how she has been tricked, she pushes Sonyetka into the river and jumps after her. They both drown while the parade of prisoners continues.

This opera is not for the faint of heart. Shostakovich’s controversial second opera Lady Macbeth of Mtsensk has long been associated with controversy. If its sexually explicit, brutal and squalid subject matter is partially responsible for such infamy, the final blow to its reputation has been delivered by its scandal-ridden performance history. Two years after its hugely successful premiere in January 1934, Stalin attended a performance of the opera. Whether he took issue with its provocative plot or its progressive score is not documented. In any case, the opera's success track was stopped by a denunciatory editorial entitled ‘Muddle instead of music’ in the official Communist Party newspaper Pravda. This attack heralded a merciless, widespread and long-lasting ideological clampdown on the Soviet musical world.

Shostakovich, then only 29, fell from being the pet of the Soviet avant-garde to struggling to preserve his artistic integrity. He was compelled to withdraw his opera until he revised it into a more acceptable if bowdlerised version, Katerina Izmajlova named after its protagonist.

The libretto of Lady Macbeth of Mtsensk is based on Nikolai Leskov's 1865 novella, although Shostakovich significantly changed its balance of sympathies. Where Leskov has depicted a cold and appalling woman, Shostakovich considered Katerina as the ‘tragic portrayal of the destiny of a talented, smart and outstanding woman, dying in the nightmarish atmosphere of pre-Revolutionary Russia’, expressing sympathy with her. With hindsight, it comes across as bitterly ironic that this opera was singled out to kick off the Soviet artistic purge. Composed in 1932, Lady Macbeth of Mtsensk was intended as the first part of a trilogy sketching the oppression and emancipation of women before, during and after the Revolution.

Only after Stalin's death did the opera begin to make a comeback in its uncensored form and was not performed in its original version in Russia until 2000. In spite of these obstacles, Lady Macbeth of Mtsensk has entered the standard repertoire worldwide. The Dutch National Opera’s 2006 production in commemoration of the 100th anniversary of the composer's birth stands out among them for its outstanding theatrical and musical merit. The late Mariss Jansons, then chief conductor of the Royal Concertgebouw Orchestra made his first appearance as guest conductor at Dutch National Opera handling Shostakovich’s most symphonic opera score. In it, the composer’s debt to the greatly admired Mahler is flagrant. Moreover, his dissonant musical language using angular vocal lines and sharp orchestrations hint at the emotional pitch of each scene. Jansons’ interpretation is lucid and sensitive and the orchestra is excellent throughout.

Carried by the orchestra, the performers are magnificent. Soprano Eva-Maria Westbroek as Katerina leaves a lasting impression: her surrender to the role is absolute in both body and voice. At first, she oozes anger and sexual frustration, in the end, despair. Christopher Ventris as Sergey is an epitome of sexual menace and arrogance. The other principals’ performance is of similar high quality, but it is the Chorus of the Dutch National Opera that deserves a special mention. Called upon to play farmhands, peasants plundering Katerina’s home, drunken wedding guests and convicts, they act as actors and commentators alike. Their commitment is palpable in the close-ups.

The Austrian director Martin Kušej', acclaimed for his intelligent, hard-hitting productions at Salzburg Festival and Staatstheater Stuttgart, pulls no punches in his portrayal of the spiral of violence and the warped eroticism at the heart of the opera. His realistic staging creates an ominous, claustrophobic atmosphere, injected with flashes of brutality, and highlights the work’s modernist aspects. On stage, a pristine glasshouse, in which Katerina seems trapped in an asinine bourgeois existence, is surrounded by a sea of mud. It is here that most of the violence occurs. Of his staging, Kušej says, ‘Orgasm and murder are two diametrically opposed poles, two extreme amplitudes of love and hate, the two fundamental relationships between human beings.’ In this bleak vision, Kušej’s drastic change of the opera’s original ending seems fitting: no longer does Katerina drown by suicide, she is beaten by Sergey and the other convicts in a scene recalling Aksinya’s rape in Act I. When they resume their march to Siberia, Katerina’s body can be seen hanging from a noose. Without a doubt, this opera is not for the faint of heart.