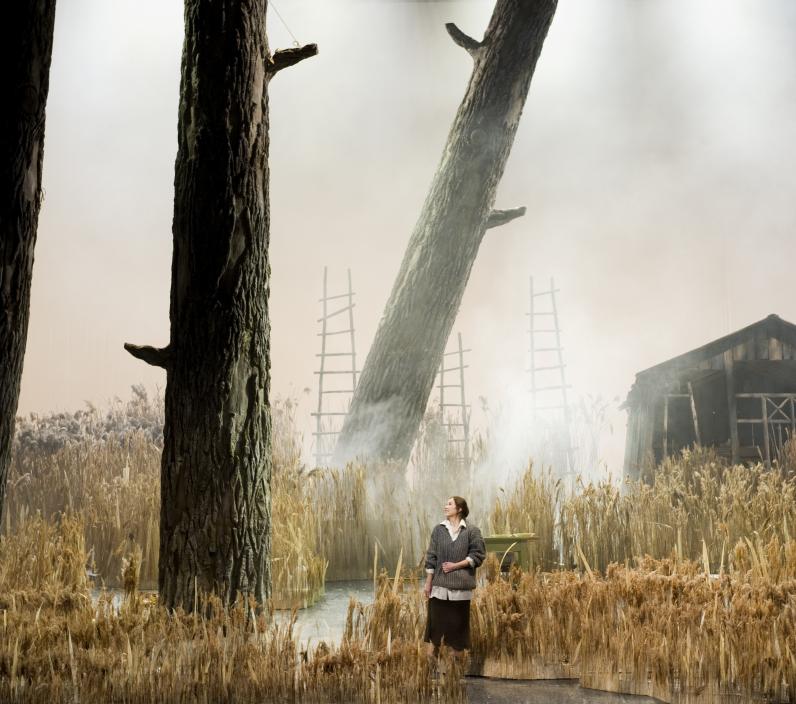 The Legend of the Invisible City of Kitezh

Rimsky-Korsakov
This performance is no longer viewable as video-on-demand for rights reasons but other material about the production is still available.

An innocent girl is taken from the sanctity of the forest to join the frightened inhabitants of a city under siege. When annihilation threatens, a miracle happens…

Rimsky-Korsakov composed his most ambitious opera during the last years of his life. It is testament to his mastery of colourful orchestration, epic choral scenes, and depiction of unusual characters, contrasting the disarming honesty of its heroine Fevronia with the amorality of its vagrant anti-hero Grishka.

Act III. At midnight in Great Kitezh, Prince Yuri tries to assemble all citizens, from young to old, to announce the approaching threat. The citizens are downcast including Prince Yuri, who had created Kitezh as a shelter from earthly sufferings and as a place of spiritual renunciation. Conducted by Marc Albrecht and directed by Dmitri Tcherniakov.

After what happened life will never be the same.
Everybody lives waiting for an unavoidable end and for extinction.

A deserted and abandoned place in the woods, away from major roads and civilization. Fevroniya renounced her previous life in order to devote herself to those in need. Here in the wilderness, she leads a completely different life. She feels the energy and that it is her destiny to help those who cannot survive on their own, who are lost or weak.

Having got lost during a hunt, Prince Vsevolod, son of Yuri, the ruler of Great Kitezh, comes this way. Astounded by this island of life amongst the impassable woods, he questions Fevroniya about her unusual fate. Vsevolod likes Fevroniya but, at first, listens doubtfully to her unearthly words. They are too much at odds with opinions and the so-called truth he had got used to. However, Fevroniya reveals a completely different worldview to him. Enraptured, Vsevolod understands that he cannot exist without her anymore. He asks Fevroniya to be his bride.

When he hears the voices of the hunters trailing behind, he bids her farewell and promises to take her with him to Great Kitezh. Led by Fyodor Poyarok, the prince’s friend, the hunters appear looking for Vsevolod and tell Fevroniya who was her visitor.

The people in the city lead an idle life trying to forget about the impending threat. Heightened festivities are going on in the square. Grishka Kuterma is the centre of attention. He is happy to mock. Suddenly one of the citizens foretells an awful calamity that will befall the land, making everybody feel dread. While people are afraid at first, they later refuse to believe the prophecies. Deep inside, everybody hopes that they will be protected inside the unapproachable Great Kitezh, that they will be able to find refuge and shelter there.

The rumour goes that today Vsevolod's bride Fevroniya shall come to Great Kitezh. Two unknown people try to bribe Grishka Kuterma so that he publicly humiliates Fevroniya when she arrives in the city. Fevroniya irritates them as they believe her unworthy to live in Great Kitezh. Grishka agrees to the plot. Fyodor Poyarok brings Fevroniya to the city. The mob on the square greets her happily, regarding her as their protector. But Grishka Kuterma publicly jeers at Fevroniya, mocking her low birth. The mob is angry. Fevroniya, however, takes Grishka under her protection, she answers him humbly and sincerely and pities Kuterma. Hearing her words, Grishka feels lost and resentful.

Poyarok tries to stop the general confusion by calling to start the wedding song. But the song is interrupted. To everybody's horror, a scared crowd runs in and announces the approach of the enemy. The Tatars burst in and cruelly kill all the scared inhabitants and blinding Poyarok. Their leaders Bedyay and Burunday carry away Fevroniya whom they liked. As the Tatar’s aim is to find the way to Great Kitezh, Grishka Kuterma agrees to lead them. Fevroniya prays to the Lord to protect Great Kitezh.

At midnight in Great Kitezh, Prince Yuri tries to assemble all citizens, from young to old, to announce the approaching threat. The people gather around the blinded Poyarok, who made it to the city together with a boy. Everybody is shaken by his story about the dreadful disaster and about the rumours that Fevroniya herself is leading the Tatars to Great Kitezh. The citizens are downcast including Prince Yuri, who had created Kitezh as a shelter from earthly sufferings and as a place of spiritual renunciation. The people who had once followed him to this place are now at a loss. But there is nothing to count on but him.

Yuri asks everybody to prepare for a heroic death. He sends all men into the battle with the Tatars. The men leave facing their certain death. Only the wives, mothers and children stay behind. Sensing that their men will not return, they are ready for anything. Yuri strengthens their resolve. The women bid farewell to each other hoping to be reunited with their men on the other side of life. On the edge of death, the sorrow of the remaining citizens of Kitezh is replaced by joy.

All the men perish in a bloody fight with the Tatars. Vsevolod gets forty mortal wounds.

In the middle of the night, Grishka Kuterma brings the Tatars to the vicinity of Great Kitezh. Bedyay and Burunday suspect that Grishka deliberately led them to the wrong place and threaten to kill him if they don't see Great Kitezh the next morning. The tired Tatars are dividing the loot. In a quarrel over Fevroniya, Burunday kills Bedyay. Then all the Tatars fall asleep.

Fevroniya hears about Vsevolod’s death and mourns her slain groom. While the Tatars are asleep Grishka begs Fevroniya to release him, telling her that her fate is sealed anyway. He confesses that he slandered her making everybody believe that it was her who led the Tatars to Kitezh. Therefore it makes no sense for her to try to save her own life. Fevroniya takes pity and forgives Grishka. Risking her own life she tries to rescue him.

By the first light of dawn, Grishka sees Great Kitezh. He loses his mind and tries to run away, taking Fevroniya with him. The Tatars wake up and have a frightening vision.

In the middle of the night, Fevroniya is exhausted and struggles to make her way through the thick of the woods. Kuterma follows her. He speaks in delirium. Fevroniya tries to comfort him and to provide him with assistance and hope. She teaches him how to pray. But Kuterma only sees demons all around and finally runs off to the woods screaming wildly. Fevroniya tries to call him in vain. All her energy is leaving her. Lying down on the ground a happy image appears in front of her: she sees herself surrounded by her loved ones, those who were dear to her, whether she had or had not met in the course of her life, had or had not been able to help.

Is not God everywhere?

Rimsky-Korsakov’s grandest opera The Legend of the Invisible City of Kitezh and the Maiden Fevroniya is often labelled ‘the Russian Parsifal’. Composed in the early years of the 20th century and first performed in 1907, it betrays some musical influences from Wagner’s last opera, first performed in 1882; but the greater affinity is with a pantheistic vision encompassing both religion and nature, through which a ‘wise fool’ (Wagner’s description) treads a dangerous path towards an elusive goal. Some identify that goal as redemption, but the true subject of both operas is compassion.

Yet the strongest impression left by Dmitri Tcherniakov’s astounding production for Dutch National Opera is the essentially Russian nature of the whole conception. The heroine Fevroniya is a ‘holy fool’ in the Russian tradition, with instinctive wisdom which transcends politics and religion. When asked by Prince Vsevelod in Act 1 whether she attends church, she answers: ‘Is not God everywhere? You may think my forest is an empty place, but no – it is a great church, where day and night we celebrate the Eucharist’. The music to which she sings these lines returns in Act IV to embody her transfigured soul.

Tcherniakov, who is his own designer, creates a gloriously dense Russian forest for these outer acts, inhabited by minutely observed natural and human incident, as if in a Breughel painting. Fevroniya is played with a sublimely fresh innocence by the Russian soprano Svetlana Ignatovich-Aksenova, radiant in the haunting cadences of her opening song. At the end of this act, after the unexpected visitors have left, and with the woodmen methodically climbing a frame far upstage, she lies down on the forest’s grassy earth, in ecstatic communion with nature. It is a heart-stopping image.

Act II, set in Little Kitezh, is in total contrast. Here Tcherniakov conjures a picture of unruly urban idleness, and peoples it with individual actions almost too detailed to be absorbed in one viewing. From this mass of contrasting activity – Fevroniya’s wedding cortège, a performing bear, a bard’s prophetic song – emerges the other great original character of this opera, Grishka Kuterma. An unemployed but outspoken drunkard, he belongs to a Russian tradition of mendacious rogues, found in Musorgsky and Borodin, but certainly not in Wagner. Some 35 years earlier, Rimsky-Korsakov worked on his first opera The Maid of Pskov, while sharing lodgings with Musorgsky when he was writing Boris Godunov. The helpless panic which infects the people of Kitezh when faced with the imminent Tatar invasion is reminiscent of both those operas from the late 1860s. It is uncannily prescient of today, as we helplessly confront a deadly pandemic.

Grishka becomes the agent of betrayal of both the haven of Kitezh, intended by its rulers as a shelter from earthly sufferings, and of the forsaken bride Fevroniya. But, confronted with annihilation, the abandoned women of Kitezh transform sorrow into joy, and Fevronia saves Grishka from the carnage. A ‘miracle’ occurs, whereby Great Kitezh becomes invisible in mist, its church bells and ghostly reflection in the water eerily evoked by Rimsky’s glassy orchestration.

In the last act, Grishka suffers alcoholic hallucinations of remorse which drive him mad. Fevroniya falls asleep on the ground and imagines the marriage with Vsevelod which she was denied; reaching out towards those she has been and has not been able to help in the course of her life. As Tcherniakov reminds us: 'After what happened on earth life can never go on as before. Everybody lives waiting for an unavoidable end.'