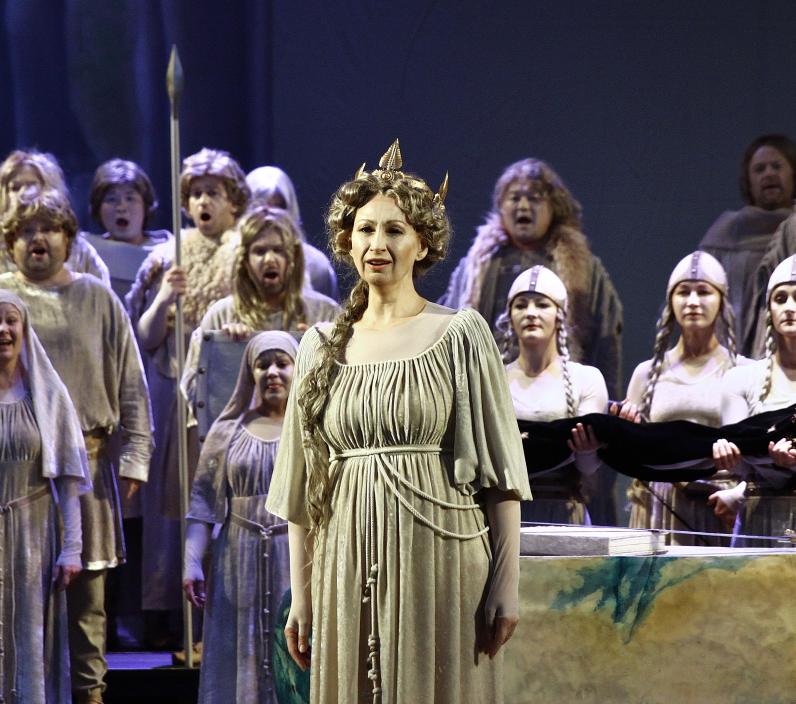 Smetana
This performance is no longer viewable as video-on-demand for rights reasons but other material about the production is still available.

A wise princess is asked to hear the case of two feuding brothers. When her judgement is called into question on account of her being a woman, she tries to maintain the peace by finding herself a husband.

Smetana’s festival opera about the legendary founder of Prague was first performed to open the city’s new National Theatre in 1881. Now reserved for special occasions, this performance marks the centenary of the Czechoslovak proclamation of independence in Prague.

Act III. Libuše (Iveta Jiříková) receives a series of visions: Břetislav’s abduction of Jitka, Moravia’s resistance of a Mongol invasion, the expanse of the Bohemian realm and the terrors of the Hussite Wars. In this final vision, the princess prophecies the great and peaceful reign of George of Poděbrady, but then the mists of time conceal the future from her eyes. She knows that many horrors lie ahead but trusts the Czech people to resist them all.

What does Libuše mean to you? In this interview, head dramaturg Ondřej Hučin argues that Smetana's opera is highly relevant to Czechs and Slovaks as they celebrate 100 years of independence, as well as for wider society in a time of division and distrust.

With its legendary characters and symbolic meanings, Libuše is not an easy opera to stage. In this interview stage director Jan Burian explains how he brought together an entire team to tackle the task.

Přemysl of Stadice was a legendary ploughman who married Libuše and founded the Přemyslid dynasty. In this interview, baritone Svatopluk Sem discusses how the character grows in prominence as the opera progresses and how he approaches solo roles in general.

What does Libuše mean to you? In this interview, Head Dramaturge Ondřej Hučin argues that Smetana's opera is highly relavent to Czechs and Slovaks as they celebrate 100 years of independence, as well as for wider society in a time of division and distrust.

Do you listen to old Czech recordings with rose-tinted headphones? In this interview, Conductor Jaroslav Kyzlink compares the inter- and post-war sounds with those of today.

The brothers Chrudoš and Šťáhlav fight over the inheritance of their late father’s estate. Radmila, their sister, asks Princess Libuše to act as an arbiter. The young girl Krasava reveals that she is it to blame for the sudden hostility that has arisen between the brothers. Libuše assures Radmila that the Gods will help to resolve the strife.

At a gathering of elders, Chrudoš and Šťáhlav accuse each other of deceit and despotism. Radovan and Lutobor – Krasava’s father and the brothers’ uncle respectively – voice their opinion that such dangerous disagreements can only be settled when the nation is co-led by a man.

Libuše calls on the brothers to argue their cases. As the elder brother, Chrudoš demands to inherit everything, whereas Šťáhlav commits his fate to the judges. Radovan announces the court’s decision – the brothers should reconcile and administer the inheritance together. Chrudoš refuses to acknowledge the verdict of the court as it is headed by a woman. To maintain the peace, Libuše decides to share her rule with a man. She chooses Přemysl, a farmer from Stadice, to be her husband, and her subjects receive the statement with joy.

Lutobor, Krasava, Radmila and Šťáhlav arrive at a burial-mound in the forest to settle the dispute with Chrudoš. Krasava tries to assuage her father’s anger at her having caused the strife – unable to make Chrudoš openly profess his affection for her, she decided to provoke him by pretending to be attracted to Šťáhlav. Lutobor vows to forgive his daughter on condition that she reconciles the two brothers. Chrudoš initially dismisses Krasava’s explanation but is ultimately moved by her words. He casts aside his wrath, and makes peace with Krasava and Šťáhlav alike.

In a village, peasants revel in merry song as they gather the final crops of the harvest. Přemysl, their landlord, is absorbed in thoughts of Libuše, whom he loves, before announcing the start of the harvest festival. Sitting in the shade of a lime tree, he admires its beauty, strength and dignity, which should serve as an example to the entire nation. Přemysl’s contemplations are cut short by the sound of an approaching royal delegation. Radovan conveys to him Libuše’s intention to make him a prince and for him to take the princess as his bride.

Happy to hear that the brothers have reconciled, Libuše forgives everyone for their errors. Chrudoš, however, is afraid that Přemysl will take revenge on him for having offended the princess. Šťáhlav and Lutobor try to convince Chrudoš to curb his quick temper, but it subsides only after Krasava asks him to pledge fealty to the new prince in the name of their love.

Libuše welcomes Přemysl as her husband, and prays to the Gods to bless them. The prince calls on Chrudoš to apologise for having slighted his wife. Chrudoš initially refuses but then surrenders. As he is about to kneel before the royal couple, Přemysl offers him a fraternal embrace. Libuše thanks the Gods, believing that they will continue to grant favour to her people. Suddenly, she is entered by a prophetic spirit, and the future of the nation unfurls before her very eyes. She anticipates times of suffering and servitude ahead and hopes that the Czech nation will never yield to evil of any form.

5 things to know about Libuše

1. The stuff of legends

In his Chronica Boemorum (Chronicle of Bohemians), Cosmas of Prague offered a history of Bohemia from the creation of the world to April 1125. He died later that year. His magnum opus includes the first written description of the legendary foundation of Bohemia around the year 600. According to the legend, Krok, the first judge of the Czech people, had three daughters: Kazi, who was a healer; Teta, who was a magician; and Lubuše, who had the gift of seeing into the future. Lubuše was the youngest but wisest of the three, and Krok chose her as his successor. She prophesied a great city and commanded her councillors to found it, which she named Prague.

Despite being fair and just, the tribesmen were displeased that their new ruler was a women and demanded that she marry. Fortunately for Lubuše, she had already fallen in love - with a ploughman named Přemysl. From among the people who worked the land, the Přemyslid dynasty was thus established. Their descendants continued as the native rulers of Bohemia until King Wenceslaus III was murdered in 1306, after which the crown passed on to the Luxembourgs and ultimately to the Habsburgs.

Josef Wenzig was a notable figure of the Czech 19th-century national movement. An educator, politician and author, he played a key role in the development of the Czech education system. It was Wenzig who adapted the Lubuše myth into a German-language libretto and presented it to Bedřich Smetana. Just as in the case of his third opera Dalibor, on which he was working at the time, Smetana had the text for Libuše translated by Wenzig’s pupil, the Czech poet and journalist Ervín Špindler. And just as in the case of Dalibor, it was Špindler’s Czech translation rather than Wenzig’s original German libretto that Smetana decided to set to music.

Libuše was the composer’s most ambitious work to date. Written between 1869 and 1872 at a time when European music was in the grip of Wagner fever, it was inevitable that the German composer’s influence would make it into the Czech opera. The result was three acts full of pageantry that Smetana labelled a ‘festival opera’. From the beginning of his work on Libuše, he wanted it to be used for a special event of nationwide importance. He had in mind the coronation of Emperor Franz Joseph I as King of Bohemia but due to opposition from German-Bohemians and Hungarians the coronation never took place. Smetana decided instead to keep his opera for the anticipated opening of the new National Theatre in Prague.

The First Czechoslovak Republic was founded on 28 October 1918. This production of Libuše, and this performance in particular, is the National Theatre Opera’s major contribution to the celebrations marking its centenary. Smetana’s opera is also a supremely suitable opera to celebrate the National Theatre’s own role during the era of the Czech national revival.

In the 1850s the construction of an independent Czech theatre was perceived as one of the leading priorities of Czech society by members of all of its classes, from aristocrats to peasants, with everyone offering money so as to make the idea come true. The plan was also supported by Emperor Franz Joseph I, who gave donations towards the construction of the theatre during his numerous visits to Prague, as did his son, Crown Prince Rudolph.

In 1881, the National Theatre finally opened with Libuše. Smetana had kept his opera for the occasion despite finishing it nine years earlier. He had not been given a ticket for the performance but at the last minute was invited into the theatre director’s box. Another 11 performances were presented after that, then the theatre was closed down to enable the completion of the finishing touches. While this work was underway a fire broke out, which destroyed the copper dome, the auditorium and the stage of the theatre. Smetana helped to raise funds for the rebuilding, and the theatre was subsequently reconstructed and reopened in 1883, again with Libuše. Ever since, the Neo-Renaissance building on the right bank of the river Vltava has been one of the architectural landmarks of Prague.