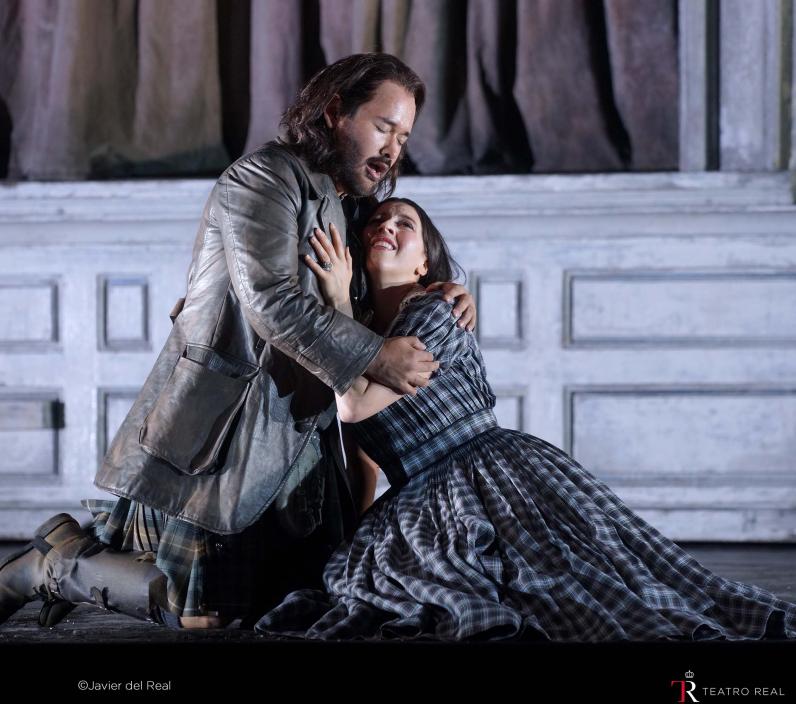 Love can be questionable, especially when it involves forgery and attempted murder. David Alden directs and Daniel Oren conducts.

Enrico (Artur Rucinski) is furious that her sister Lucia has had a secret romantic meeting with a family’s enemy. He feels betrayed. Conducted by Daniel Oren and directed by David Alden.

Act I. Waiting with her servant at a fountain, Lucia (Lisette Oropesa) remembers the night when the ghost of a woman killed at the fountain by Edgardo's ancestor appeared to her and warned her that her romance with Edgardo would end in blood. Conducted by Daniel Oren and directed by David Alden.

With the help of a little camera, see the world through the eyes of Lisette Oropesa as she rehearses the title role of Donizetti’s Lucia di Lammermoor.

Scotland, mid-19th century. An intruder has been spotted at night on the grounds of Lammermoor Castle, home of Enrico Ashton. Normanno, the captain of the guard, sends Enrico’s men off in search of the stranger. Enrico arrives, troubled. His family’s fortunes are in danger, and only the arranged marriage of his sister, Lucia, with Lord Arturo can save them. The chaplain Raimondo, Lucia’s tutor, reminds Enrico that the girl is still mourning the death of her mother. But Normanno reveals that Lucia is concealing a great love for Edgardo di Ravenswood, leader of the Ashtons’ political enemies. Enrico is furious and swears vengeance. The men return and explain that they have seen and identified the intruder as Edgardo. Enrico’s fury increases.

Just before dawn at a fountain in the woods nearby, Lucia and her companion Alisa are waiting for Edgardo. Lucia relates that, at the fountain, she has seen the ghost of a girl who was stabbed by her jealous lover. Alisa urges her to leave Edgardo, but Lucia insists that her love for Edgardo brings her great joy and may overcome all. Edgardo arrives and explains that he must go to France on a political mission. Before he leaves he wants to make peace with Enrico. Lucia, however, asks Edgardo to keep their love a secret. Edgardo agrees, and they exchange rings and vows of devotion.

It is some months later, the day on which Lucia is to marry Arturo. Normanno assures Enrico that he has successfully intercepted all correspondence between the lovers and has in addition procured a forged letter, supposedly from Edgardo, that indicates he is involved with another woman. As the captain goes off to welcome the groom, Lucia enters, continuing to defy her brother. Enrico shows her the forged letter. Lucia is heartbroken, but Enrico insists that she marry Arturo to save the family. He leaves, and Raimondo, convinced no hope remains for Lucia’s love, reminds her of her dead mother and urges her to do a sister’s duty. She finally agrees.

As the wedding guests arrive, Enrico explains to Arturo that Lucia is still in a state of melancholy because of her mother’s death. The girl enters and reluctantly signs the marriage contract. Suddenly Edgardo bursts in, claiming his bride, and the entire company is overcome by shock (Sextet: “Chi mi frena in tal momento”). Arturo and Enrico order Edgardo to leave but he insists that he and Lucia are engaged. When Raimondo shows him the contract with Lucia’s signature, Edgardo curses her and tears his ring from her finger before finally leaving in despair and rage.

Enrico visits Edgardo at his dilapidated home and taunts him with the news that Lucia and Arturo have just been married. The two men agree to meet at dawn by the tombs of the Ravenswoods for a duel.

Back at Lammermoor, Raimondo interrupts the wedding festivities with the news that Lucia has gone mad and killed Arturo. Lucia enters, covered in blood. Moving between tenderness, joy, and terror, she recalls her meetings with Edgardo and imagines she is with him on their wedding night. She vows she will never be happy in heaven without her lover and that she will see him there. When Enrico returns, he is enraged at Lucia’s behavior, but soon realizes that she has lost her senses. After a confused and violent exchange with her brother, Lucia collapses.

At the graveyard, Edgardo laments that he has to live without Lucia and awaits his duel with Enrico, which he hopes will end his own life. Guests coming from Lammermoor Castle tell him that the dying Lucia has called his name. As he is about to rush to her, Raimondo announces that she has died. Determined to join Lucia in heaven, Edgardo stabs himself.

Lucia di Lammermoor by Gaetano Donizetti is an opera seria in three acts. This bel canto piece marked the birth of the Italian Romantic Movement. The storyline of this opera is based on Walter Scott’s novel, The Bride of Lammermoor, written in 1819. Donizetti changed only a few of the characters’ names.

Elements of Gothic style can be found in Lucia di Lammermoor. In the 19th century in Italy, there is a revival of interest in the Middle Ages by the Romantic Movement, which is characterised by a fascination for the fantastic and the macabre.

The story takes place in Scotland at the end of the 16th century in an old castle. The storm scene, the ghost stories and the presence of a mysterious fountain contribute to the ‘fantastic’ setting. Lucia is the ideal Gothic heroine. Oppressed, she is driven mad by a patriarchal society; external and internal torments will lead her to kill her husband. Her state of madness resonates with Donizetti's life. Affected by syphilis in 1845, he lost the ability to speak and gradually sank into madness. He was placed in an institution and died four years later.

2° The sextet and the mad scene

The sextet at the end of Act 2 is one of opera’s most well-known dramatic scenes. Edgardo di Ravenswood appears on stage just after Lucia has signed her marriage contract with Lord Bucklaw. Edgardo curses his mistress: 'Chi mi frena in tal momento? Chi tronco dell'ire corso?' ('Who restrains me in such a moment? Who cuts short the course of my anger?')

The famous mad scene in the third act, 'Oh, giusto cielo! ... It dolce suono' ('Oh merciful heaven! ... The sweet sound'), takes place in the great hall of Ravenswood Castle among the guests at Lucia and Lord Bucklaw’s wedding. The singing evoke the heroine’s hallucinations, who alternates between exaltation and despondency. A glass harmonica was initially chosen to accompany this scene in view of its reputed effect on the listeners’ nerves. Very expensive and difficult to build, it was later replaced by a flute. In this famous aria, Lucia pushes the high-pitched notes to their extreme.

3° Lucia: one of the most demanding roles in opera

The role of Lucia requires an exceptional degree of virtuosity; it is a challenge that demands technical mastery and dramatic sensitivity. The mad scene, in particular, is very popular among the great sopranos coloraturas for the technical mastery that it requires, its alternation between high and low registers, and its impressive melodic lines (high Cs and high Ds).

There have been notable performances in history: Maria Callas (in Mexico City in 1952), Joan Sutherland (in Covent Garden in 1959), Renata Scotta (in Marseille in 1970), Natalie Dessay (in Cologne in 2007) and Anna Netrebko (at the Metropolitan Opera in 2009).

4° The mad scene in Cinema and Literature

In George Cukor's movie Gaslight, released in 1944, Ingrid Bergman rehearses the mad scene. Her singing professor does not like her performance; he accuses her of being too content with her own life to make the scene sound tragic. Ironically, Bergman sinks into madness at the end of the film. This famous aria can also be heard in Luc Besson's Fifth Element, sung by an alien; the diva Plavalaguna. The soprano Inva Mula lent her voice to the character, which was then revised on a computer.

Many writers have also used this dramatic moment in their novels. In Flaubert’s Madame Bovary, Emma Bovary sees Lucia di Lammermoor in Rouen with her husband Charles Bovary. This performance reinforces Emma's hypersensitivity. She sympathizes with Lucia’s situation, in which she recognises herself: 'Lucie, looking solemn, began her cavatina in G major: she uttered love laments, begged for wings. And at that moment Emma, too, longed that she might leave life behind and take flight in an embrace.' In Anna Karenina, by Tolstoy, the eponymous heroine attends this opera in St. Petersburg to look for her lover, Vronsky. She causes a scandal by defying social conventions.

American director David Alden has changed the context of this opera to set it in the Victorian era. This creates an atmosphere typically found in Emily Bronte or Charles Dickens’s novels. As a film director, David Alden finds inspiration in cinema. For the mad scene, he was inspired by Carrie, Brian de Palma’s horror teen movie and specifically, the prom scene, in which no sound is heard, except for the dripping of blood.