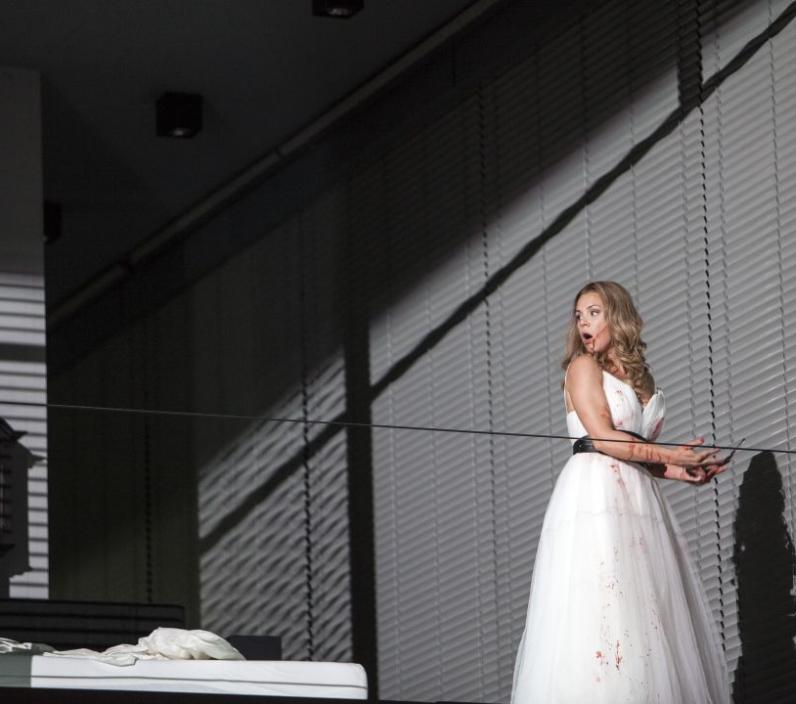 Having disposed of his enemies, the Roman ruler Lucio Silla is now all-powerful. Now he wants to marry the daughter of his slain enemy Giunia, but underestimates how much she hates him.

In Lucio Silla, Mozart and his librettist Gamerra tie Silla's predatory passion to his tyrannical behaviour, thus anticipating romantic sensibilities. Echoing the twilight and melancholy pages of the score, director Tobias Kratzer draws on gothic and contemporary imagery from film and television.

Act I. Imagining his wife Guinia all alone, Cecilio (Anna Bonitatibus) imagines the moment he sees her again. He wonders how much joy he will feel if now, when he is only thinking about her, he already feels exhilarated. Directed by Tobias Kratzer and conducted by Antonello Manacorda.

The Dutch soprano Lenneke Ruiten often sings Mozart - most recently the roles of Fiordiligi in Così fan tutte and Donna Elvira in Don Giovanni in La Monnaie’s Da Ponte Trilogy. Listen to her explaining her process of getting into the character of Giunia.

Tobias Kratzer is the director of this production of Lucio Silla at La Monnaie / De Munt. In this video, he talks about the darkness and proto-romantic savour of Mozart's opera.

The exiled senator Cecilio meets his friend Cinna who tells him his betrothed Giunia mourns his death, a lie the dictator Silla perpetrated so that he can win Giunia for himself. Cinna advises Cecilio to meet Giunia by her father’s tomb.

Meanwhile, Silla seeks his sister Celia’s help on how to win over Guinia, who advises him to use cunning and gentleness. His sister advises him to use cunning and gentleness. Silla then visits Giunia and asks her to choose between his love and death. Giunia chooses to remain faithful to her exiled fiancé and to her father, Marius, killed by the dictator. Faced with this rejection, Silla decides to behave as a tyrant.

In the cemetery, Cecilio waits for Giunia, hidden, thinking of the heroes buried around him. The two lovers finally reunite.

His friend Aufidio convinces Silla to ask for the support of the Senate to force Giunia to marry him, certain that it would not oppose the will of the people’s representatives. To his sister Celia, who loses hope of convincing Giunia, Silla announces his future marriage to the young lady. In order to ensure her support, he promises her Cinna’s hand whom she loves.

For his part, Cecilio, having learned of the assassination of Giunia's father, is determined to kill the dictator and thus save his fiancée. His friend Cinna then meets Celia, who doesn't dare to tell him about Silla’s decision to marry them that very day. Giunia consults with Cinna who suggests she accept Silla’s proposal only to murder him in their wedding bed. Giunia refuses, stating that vengeance is for Heaven alone to consider. She asks Cinna to make sure that Cecilio stays hidden from danger. Cinna resolves to kill Silla himself.

Silla promises Giunia a cruel death, of which she will not be the only victim. Frozen with fear by this threat, she begs Cecilio to flee. From Celia, who tries once again to convince her to marry Silla, Giunia learns of the dictator's plan to marry her to Cinna. Fearing that Cecilio has been captured, she decides to go to the Senate to beg for mercy for her fiancé .

On Capitol Hill, the senators cheer for Lucio Silla. Silla asks for Giunia’s hand in marriage, who threatens to kill herself rather than accept such a fate. When Cecilio uncovers himself to help her and is captured. Silla rejoices, finally taking his revenge.

Cinna visits Cecilio in prison and promises to save him. He then offers to marry Celia if she succeeds in convincing her brother Silla not to execute Cecilio. Having lost all hope, Cecilio entrusts his fiancé to Cinna.

Giunia, authorised by Silla to bid farewell to her fiancé, visits him in his dungeon. Shortly afterwards, Aufidio comes to fetch the prisoner to take him to Silla to be sentenced. The two lovers embrace one last time. Left alone, Giunia decides to die with her lover.

Before announcing his verdict, Silla listens to Cinna and Celia, who warn him of the dangers he would run if Cecilio and Giunia were to die. Silla finally allows himself to bend. Giunia, brought in, begs the senators’ mercy. Against all expectations, Silla announces that he will spare Cecilio’s life and unite him with Giunia. He also overturns the verdicts of other opponents condemned to exile. Cinna then confesses to having plotted against the dictator’s life. As a sign of forgiveness, the dictator gives him his sister Celia’s hand in marriage. In a final gesture of humility, Silla abdicates from his throne, now advocating innocence and fortitude.

With the story of Lucio Silla, director Tobias Kratzer’s aim is not so much to show how the evil leader is defeated and finally grants clemency, but to turn Silla into a character in which everyone can recognize certain themselves - perhaps against their will. ‘He is a destabilizing character precisely because he has more in common with us than we are willing to admit!’ Kratzer explains. ‘The lack of empathy - typical of so many leaders - is not foreign to any of us, even if Silla embodies an extreme form of it.’ In this video, he talks about the darkness and proto-romantic savour of this opera. 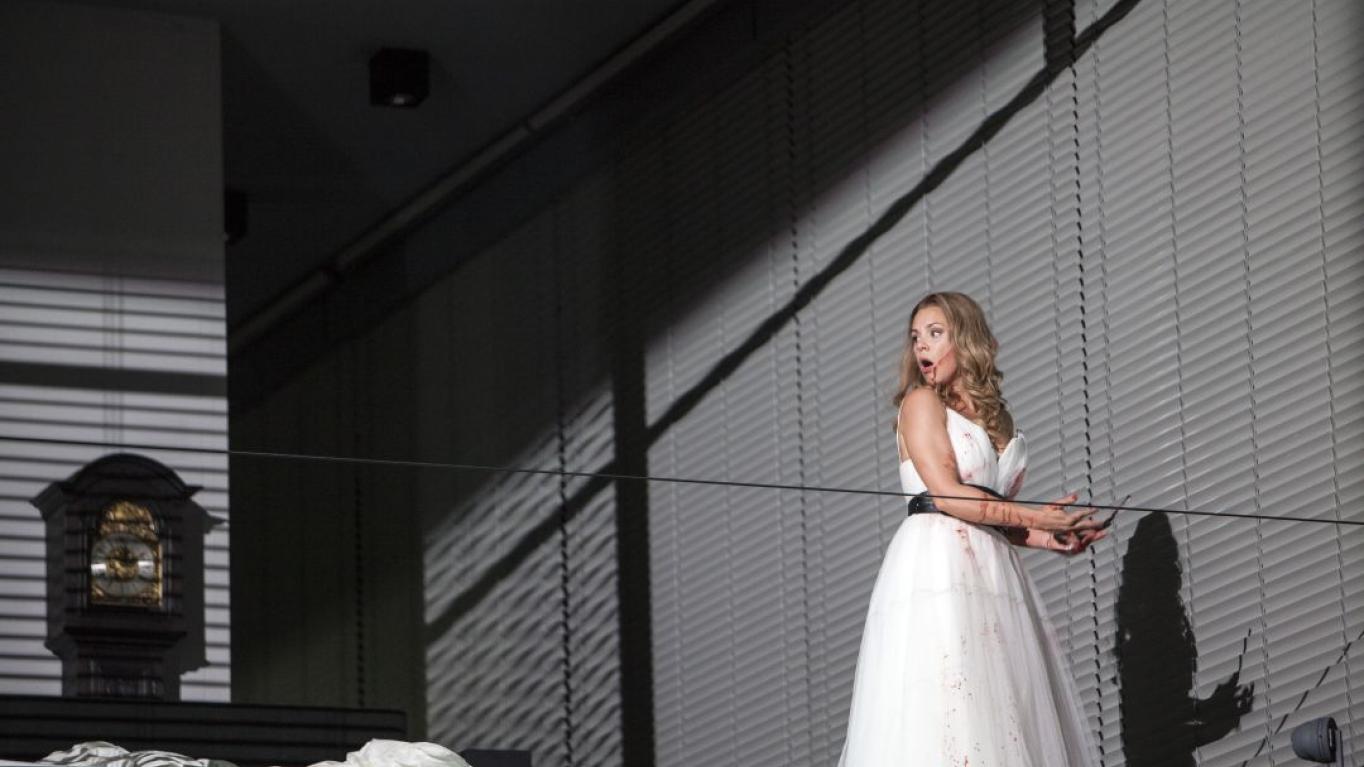 The Dutch soprano Lenneke Ruiten often sings Mozart - most recently the roles of Fiordiligi in Così fan tutte and Donna Elvira in Don Giovanni in La Monnaie’s Da Ponte Trilogy. Although she attests a few small beginner’s mistakes to Lucio Silla, which Mozart composed at age sixteen, Ruiten considers that the far-reaching way in which Mozart sets human emotions as fundamental as love, hope, fear of death or anger to music, testifies to great maturity and skill. ‘The opera encloses musical moments of breathtaking beauty, sometimes ahead of their time, which force admiration and give artists the freedom to bare themselves without restraint,’ she confesses. Listen to her explaining her process of getting into the character of Giunia.