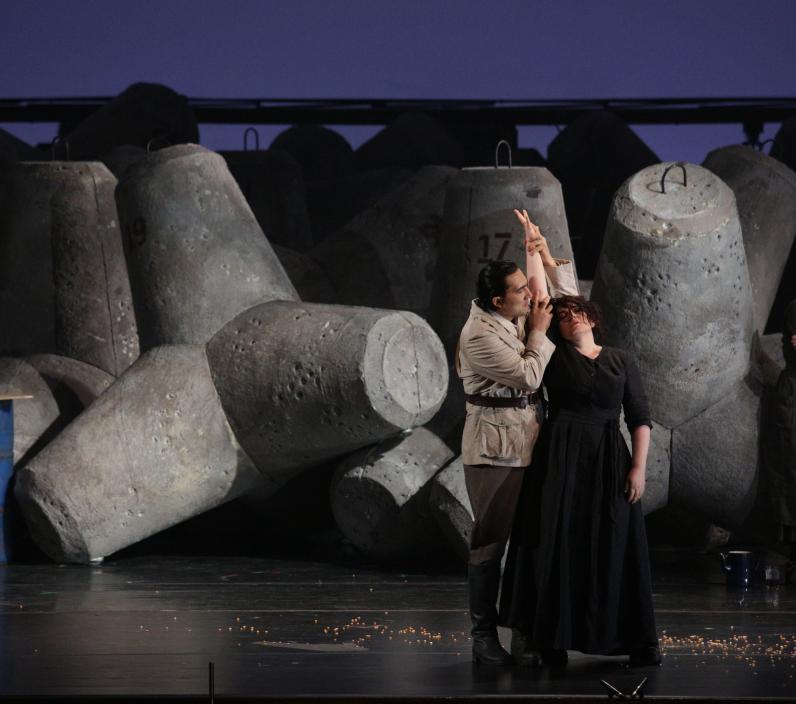 Cherubini
This performance is no longer viewable as video-on-demand for rights reasons but other material about the production is still available.

A furious sorceress seeks revenge after her husband takes the children, leaves the country and finds himself a younger wife.

Cherubini was regarded by Beethoven as the greatest composer among his contemporaries and by Schumann as ‘the best harmonist of our time’. People’s Artist of Russia and two-time Golden Mask winner Hibla Gerzmava sings the famously difficult title role, inspired by the mythical sorceress from Colchis.

How does it feel to lose custody over your children? In Cherubini’s operatic take on the ancient Greek myth, Medea (Hibla Gerzmava) begs her husband, Giasone (Majmiddin Mavlyanov), to let her take their two children home.

Glauce, daughter of King Creon, prepares for her wedding. She is marrying Jason and is fearful that Medea, his abandoned wife, will seek revenge. Medea has borne Jason two children, and Creon assures him that they will be protected, educated and taught to hate their mother as a wicked sorceress. The Argonauts present Glauce with the Golden Fleece that Jason took from Medea’s father with her help. They toast the couple and invite the god Hymen to attend the wedding.

The Captain of the Guard announces the arrival of a veiled woman who does not want to give her name. Creon grants her entrance, and the woman presents herself as Medea. She asks Jason to come home and warns Creon that he should cancel the wedding. The king answers her threats with threats of his own. Medea reminds Jason of the sacrifices she made for him and begs him to have pity on her as an abandoned mother. When Jason rejects her pleas, Medea swears revenge.

Medea complains about her lonely fate. Neris, her slave, urges her to escape while she still has time but then they are found by Creon and his guards. The king informs Medea that Jason has asked him to spare her life but that she must leave the country immediately. Medea reminds Creon that without her help in taking the Golden Fleece, Jason would be dead. She asks for asylum so that she could at least see her children occasionally. Creon refuses her request but allows her to stay for one more day.

Neris promises to share whatever fate befalls her mistress but Medea has decided to use her final day for revenge. She asks Jason to let her take the children home with her. He is not willing for that to happen but allows her to be with them until her departure. Medea asks Neris to present Glauce with jewellery and a dress soaked in poison as a wedding present, and she call on Hymen to smile upon her plan.

Medea tries to calm her pangs of guilt as she prepares to kill her own children. Neris brings them to her and she is overcome with motherly love. The slave informs Medea that Glauce has accepted the wedding gifts and is already wearing the dress. Satisfied that revenge has been served, she asks Neris to take her children to safety.

The wedding guests cry out in horror: Glauce has been killed by the poisoned dress. They rush out in a panic and demand Medea face death for her crime. Jason goes in search of his children but only finds Neris, who tells him that her mistress, who has had a change of mind, plans to kill them. Medea steps out holding a weapon. She tells Jason that she has been avenged by the blood of their children and that he is now free to find himself another wife.

4 things to know about Medea

1° From Colchis to Corinth

In Greek mythology, the sorceress Medea is the daughter of King Aeëtes of Colchis, niece of Circe and the granddaughter of Helios. Her father’s kingdom was located on the eastern coast of the Black Sea, centred in present-day western Georgia and extending into present-day Turkey and Russia. It was described as a land rich with gold, iron, timber and honey that would export its resources mostly to ancient Greece, but it is best known as the destination of Jason and the Argonauts in their hunt for the Golden fleece.

When Jason arrived to claim the Fleece as his own, Aeëtes promised to give it to him only if he could perform certain tasks. Medea fell in love with Jason and promised to help him, but only on the condition that if he succeeded, he would take her with him and marry her. Jason agreed, and together they were able to take the Fleece. But there was still the matter of Jason and the Argonauts sailing away with Medea, and for this the princess was prepared to do the unthinkable. As Aeëtes pursued them in his ship, Medea killed and dismembered her brother, Absyrtus, and threw pieces of his body overboard. Aeëtes paused to gather the pieces of his son one by one, and thus Jason and Medea escaped.

As may be expected from two such balanced individuals, their relationship was not the most stable. Medea bore Jason two children, but when she tricked the daughters of Pelias into killing their own father, she and her family was exiled to Corinth. There, Jason became engaged to Glauce, daughter of the King of Corinth, in order to strengthen his political ties. When Medea confronted Jason about the engagement and cited all the help she had given him, he retorted that it was not she that he should thank, but Aphrodite, who made Medea fall in love with him. That is where the opera begins.

2° From myth to stage

The myth of Medea and Jason appears in Hesiod's poem Theogony around 700 BC and in Apollonius of Rhodes’s 3rd century BC literary version, the Argonautica. Halfway between those two publications, Euripides adapted the story into a tragedy, which he entered into the main competition of the City Dionysia festival of 431 BC. The Athenian audience were not enamoured with the play, and it ranked third out of the three tragedies performed. Largely forgotten for 400 years, the play was rediscovered by Ovid, Seneca the Younger and other Roman tragedians, who adapted it into successful Augustan dramas. Since its subsequent rediscovery in 16th-century Europe, Euripides’s Medea has become a classic of the Western canon and is the most frequently performed Greek tragedy today.

In the mid 1790s, Luigi Cherubini was inspired to write an opéra-comique based on the Medea myth. The subject had already proven popular for opera, with Francesco Cavalli’s Giasone, Jean-Baptiste Lully’s Thésée and George Frideric Handel's Teseo all having been staged before. For the text, Cherubini turned to François-Benoît Hoffman, a playwright and critic who had recently written several librettos for “the most important opera composer in French during the revolution,” Étienne Méhul. Hoffman based his Médée on a 17th-century adaptation of Euripides’ play by the French tragedist Pierre Corneille.

Cherubini’s opera received a lukewarm response when it opened on 13 March 1797 at the Théâtre Feydeau in Paris. It was revived in Frankfurt in 1855 in a German translation by Franz Lachner, who also composed recitative for the spoken dialogue. Carlo Zangarini created an Italian translation for La Scala in 1909, but the opera then fell out of fashion. That is until 1953, when Maria Callas played Medea in Florence. It became one of her signature roles, which she went on to perform in Milan, London and Dallas, and she also played the vengeful sorceress in Pier Paolo Pasolini’s 1969 film Medea - her only film role.

The title role of Medea is a formidable challenge that requires vocal mastery and a commanding stage presence. No opera house would dare to produce Cherubini’s work without a stellar soprano to do it justice. When Stanislavsky and Nemirovich-Danchenko Music Theatre decided on the oprea they were fortunate enough to have not one but two singers in the company who possessed powerful and expressive voices as well as brilliant acting skills: the world-renowned Hibla Gerzmava; and Natalia Muradymova, one of the brightest stars of the Moscow opera scene.

Vladimir Arefiev’s set designs for Medea consists of dozens of tetrapods – not the superclass of four-limbed vertebrates that includes mammals, reptiles, amphibians and birds, but the tetrahedral concrete structures used to enforce coastal structures such as seawalls and breakwaters.

For the first half of the 20th century, rectangular or cubic artificial blocks were a common sight along vulnerable sections of shoreline, but these were in fact less stable than natural rocks of the same weight. Then in 1950 engineers based at the Dauphinois Hydraulics Laboratory in Grenoble developed a new, interlocking structure that was rougher, more permeable and more resistant. Lead engineer Pierre Danel explained at the International Conference on Coastal Engineering three years later that ‘after various preliminary studies, the outline took shape: a sort of sea monster with four tentacles which was patented under the name “tetrapod”.’

First used in Casablanca, this French invention can now be found all over the world, from the gateways to the Venetian Lagoon to the waterfront of Mumbai. They entirely surround the capital of the Maldives to protect her from rising sea levels, and they cover half the coast of Japan to defend against typhoons. Tetrapods may attract scorn for not fitting into their natural surroundings, but these silent sentinels have saved – and continue to save – countless lives.