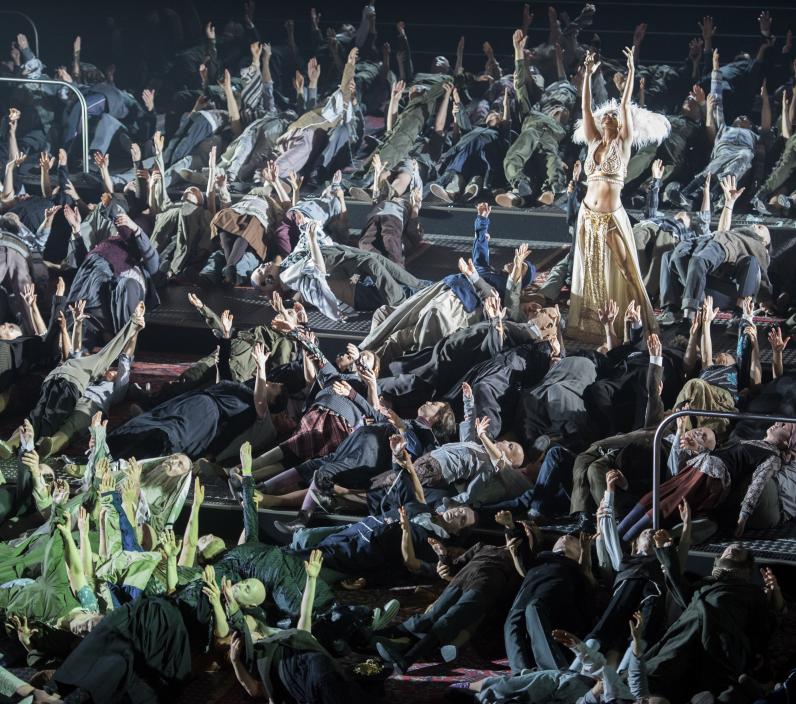 Schönberg
This performance is no longer viewable as video-on-demand for rights reasons but other material about the production is still available.

Moses relies on his eloquent brother’s help to translate the abstract idea of God into understandable images. But don't his persuasive words mar the pure idea that Moses finds so impossible to put into words?

In Schönberg's unfinished opus magnum, Barrie Kosky recounts the Israelites' exodus - with almost 200 performers on stage - as a parable of humanity's never-ending search for answers. The Russian star conductor Vladimir Jurowski returns to his former workplace, the Komische Oper Berlin, to commemorate the 70th anniversary of the liberation of Auschwitz.

Act 1. The Israeli people are delighted with Aron's miracle, but the priest argues that divine law alone does not have the power to free them from pharaonic bondage.Thereupon Aron makes the hand of Moses leprous in order to heal it later. Conducted by Vladimir Jurowski and directed by Barrie Kosky.

'Moses is somebody who's got the world on his shoulders permanently, not just the world of the Almighty but also the responsibility of an entire nation,' says Robert Hayward, who plays the difficult role of Moses in Schönberg's Moses und Aron in the Komische Oper Berlin's production.

At the burning bush, Moses is commanded to lead Israel to the right concept of God (i.e. to lead the people out of the Egypt of this world). He meets Aron, who knows how to reduce the concept to a popular form. Already supported and imperceptibly opposed by Aron, Moses addresses the people, who believe him as a result of certain […] miracles and, entrusting themselves to his leadership, escape from Egypt with him.

On Mount Horeb, Moses receives the Tablets of the Law, the laws, which arise by themselves out of his own thoughts. A distinction is probably to be made between the human necessities of life in society and the purely abstract demands made by the idea. While Moses is listening (absorbed) to the word of God and trying to give it inalterable form in stone, tumult breaks out […], in which the most essential characteristic – the passionate eruption of a sensual need for  God – must become clearly apparent. Thus noble, but human, passions reveal that this people is in all honesty not sufficiently mature for this grand idea. Finally, Moses is persuaded by Aron to make concessions.

Arnold Schönberg’s opera Moses und Aron ostensibly depicts a biblical theme - Schönberg wrote the German libretto himself after the Book of Exodus. Its stakes, moreover, can only be fully understood in the context of the time of its composition, marked by the likes of Theodor Herzl, the father of modern political Zionism, and the founder of psychoanalysis Sigmund Freud.

Schönberg conceived the work as a direct response to a Jewish identity crisis triggered by the trauma of an antisemitic encounter in 1921. While vacationing in the Austrian town of Mattsee, he was forced to leave unexpectedly, since he was not welcome there as a Jew. Having converted to Protestantism in 1898, Schönberg saw this experience as the catalyst of his commitment to his Jewish identity. He would formally return to Judaism in 1933, the year of his emigration to the United States.

Arnold Schönberg
I have decided to give up my previous activities as a composer, writer, music theoretician, etc., and to do only one thing from now on: work for the salvation of the Jews.

Soon he became engrossed with the subject of the unlike yet complementary brothers Moses and Aaron. Their theme already appears in his agitprop play Der biblische Weg (The biblical way, 1926-27) set in the modern-day, in which the protagonist Max Aruns - whose name is barely hid reference to Moses and Aaron - ultimately fails as the leader of the Jewish people.

Arnold Schönberg
Nobody wanted to be, someone had to be, so I let it be me.

Returning to its biblical roots, Schönberg first wrote the text to a cantata entitled ‘Moses am brennenden Dornbusch’ (Moses at the burning bush), transforming it into three-part oratorio in 1928, before finally composing the two first acts of the opera between 1930 and 1932. Schönberg intended to complete the third act until his death, but only wrote a couple of sketches. Consequently, the opera was never performed during his lifetime.

In spite of its unfinished status, the opera is considered a masterpiece. Through the biblical material, Schönberg worked through two inner conflicts: his struggle with political Zionism and his ambiguity towards his own religious mysticism. Schönberg was torn between his modern rational convictions, his political engagement and his confrontation with irrational elements of faith.

Sigmund Freud
How enviable, to those of us who are poor in faith, do those enquirers seem who are convinced of the existence of a Supreme Being!

Yet, Schönberg’s mysticism - his examination of the Kabbalah, his fascination with numbers, even his famous deadly fear of the number 13 - can be traced back to his compositional work. After reaching compositional liberty in the dissolution of tonality, Schönberg conceived a structuralist approach, known as the twelve-tone technique that attacks the very atoms of the musical system.

Despite his musical radicality, Schönberg was right to consider himself the heir of the European musical tradition, the last stone of its edifice according to the conductor Vladimir Jurowski. The Dance around the Golden Calf in Act 2, for example, can be considered a continuation of the great opera-ballet of the French Grand Opéra, while the male choirs recall Kurt Weill.

The introverted thinker and the extroverted speaker

‘Moses and Aron mean to me two activities of a man: a statesman.’ Schönberg reflected. ‘His two souls know nothing of each other; the purity of his thought has not been clouded by his public actions, and these do not become weakened by consideration for the unresolved problems that the thought poses.’

Thoughts versus words, ideas versus images: for Schönberg, the siblings embody two very different concepts. Moses, the intellectual, requires his brother's support to translate the abstract idea of God into understandable words and images. In Schönberg’s vision, Aron becomes a magician. He alone is able to convince the fickle people to follow Moses in his worship of an abstract God.

Martin Buber
It is laid upon the stammering to bring the voice of Heaven to Earth.

Schönberg never completed his opera. Jurowski muses that ‘If the main theme of an opera is the problem of abstraction, that is, if you cannot see, hear or feel something elemental, then there can be no end.’

Although the third act of the opera was completed by the pianist and composer Zoltán Kocsis in 2010, the director Barrie Kosky chose to perform as Schönberg left it in 1932. ‘That last sentence of Moses - ‘O word, thou word that I lack!’ - not only the text but also this crescendo-decrescendo on the last note, played by the violins - it's like a last breath, a last echo. That is not the end of an act, that is the end of the opera.’

Much as Schönberg never set foot on European soil again after 1933 dying in American exile, his Moses too remained in the desert unable to complete his journey.