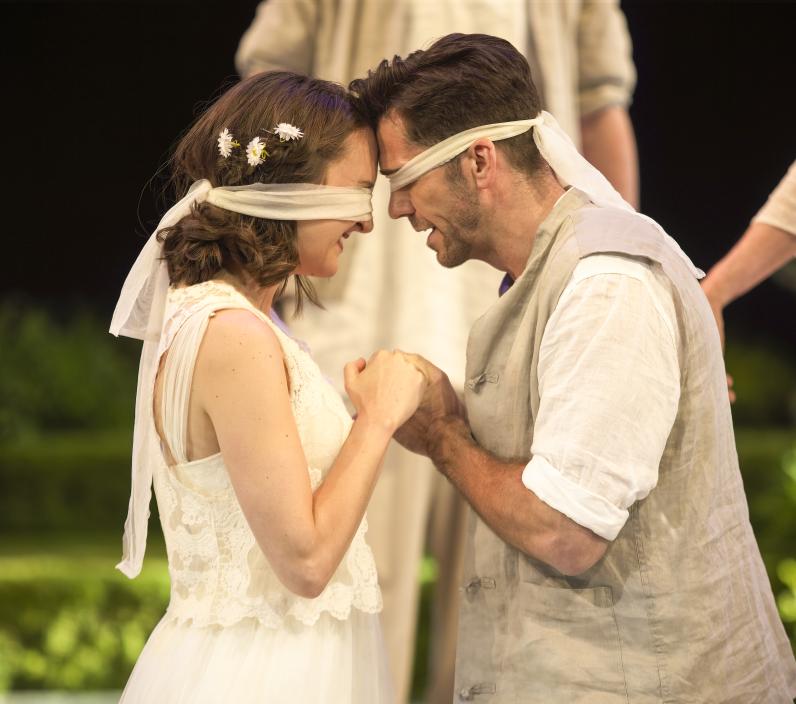 Orpheus sings his way to the underworld in pursuit of his wife Euridice, overcoming all obstacles by the power of his voice. He finds her but loses her again. How long do we grieve a loved one? How long do we hear their voice echoing after they have gone?

In 1607, Claudio Monteverdi created his Orfeo, for the Carnival opening at the Court Theatre of Duke Vincenzo I in Mantua. Billed as a ‘musical fable’, here was a new form where characters are brought to life with poignant human feelings. Orfeo’s dramatic power gave birth to what we call opera today. As in the original performance in an intimate space in Mantua, Garsington’s summer 2022 production sees the singers and musicians very close; the instrumentalists are part of the action, onstage and visible. Early music specialist Laurence Cummings conducts the musicians of The English Concert. Arielle Smith choreographs singers and dancers; the chorus is a constant presence and critical to the storytelling. Ecstatically received by audiences and critics alike, here is an evening to do justice to Monteverdi's genius and power to encapsulate the human condition through music, movement and song.

An introduction to Monteverdi's Orfeo at Garsington Opera, with director John Caird and conductor Laurence Cummings.

Prologue
Music commands silence while she tells the story of Orfeo, the son of Apollo, god of music.

Act I
Revellers celebrate the wedding day of Orfeo and Euridice.

Act II
Orfeo rejoices in his union with Euridice. A messenger arrives with the terrible news that Euridice has been bitten by a snake and has died. Orfeo despairs and then resolves that he will rescue Euridice from the underworld.

Act III
Hope accompanies Orfeo to the gateway of the underworld, which is guarded by Charon. At first, Orfeo’s music fails to charm Charon but eventually he is lulled to sleep and Orfeo is able to pass him by.

Act IV
Proserpina, queen of the underworld, is moved by Orfeo’s music and begs Pluto, king of the underworld, to release Euridice. Pluto agrees, on condition that Orfeo neither speaks to her nor turns around to look at her while leading her back. As they travel, Orfeo doubts that Euridice is really behind him and is unable to resist turning to look. Euridice is taken from him for the second time and Orfeo is forced to return to his own world.

Act V
Consumed by grief, Orfeo renounces all women. His father, Apollo, takes pity on him and offers him a life in the heavens, making music for immortality.

A grand fusion of musical traditions

Did Monteverdi invent opera? Technically, no; practically, yes. Opera had existed for only a decade when the composer produced Orfeo in 1607, and he was the first to draw perfection from the form. By 1600, the theory of music drama had fallen into place; for decades progressive scholars, among them Vincenzo Galilei, the father of Galileo, had been urging composers to abandon the arcana of counterpoint in favour of a more expressive, single-voiced style. The pioneers of Florentine opera fashioned a method of recitative singing which allowed for the exposition of plot between arias. But the earliest operas lacked narrative drive; after a while, the recitatives tended to exhaust the ears. Monteverdi, who was already writing quasi-operatic scenes in madrigal form, electrified the genre with the force of his personality. Conversational melodic lines, commanding interval leaps, sharp rhythmic contrasts, abrupt chord changes, biting dissonances, ominous roving basses – all spell out the violence of Orpheus’s emotions as he descends into the underworld.

Vocal lines are typical of the period, with florid ornamentation unfolding within narrow intervals but the music moves at an unusually deliberate, meditative pace. Pairs of instruments play spectral ascending and descending scales, with the second part sounding as an echo. The harp echoes itself. Monteverdi is relaxing his grip on the narrative and delving deep into his character’s condition. This is the opportunity afforded by the evening-length structure of opera. The clock slows; the horizon widens; we go walking in the landscape of Orpheus’s soul.

Monteverdi’s resonance today is not just a matter of compositional mastery. His protagonists become expressive individuals, yet they inhabit a world where hierarchies are fixed and freedoms circumscribed. ‘Nothing delightful here below endures’, Apollo tells Orpheus, advising him to give up on life and go to heaven. Monteverdi has often been likened to Shakespeare, with good reason. Both artists give fathomless depth to familiar tales; both manoeuvre adroitly between high and low; both still hold audiences captivated four centuries on.